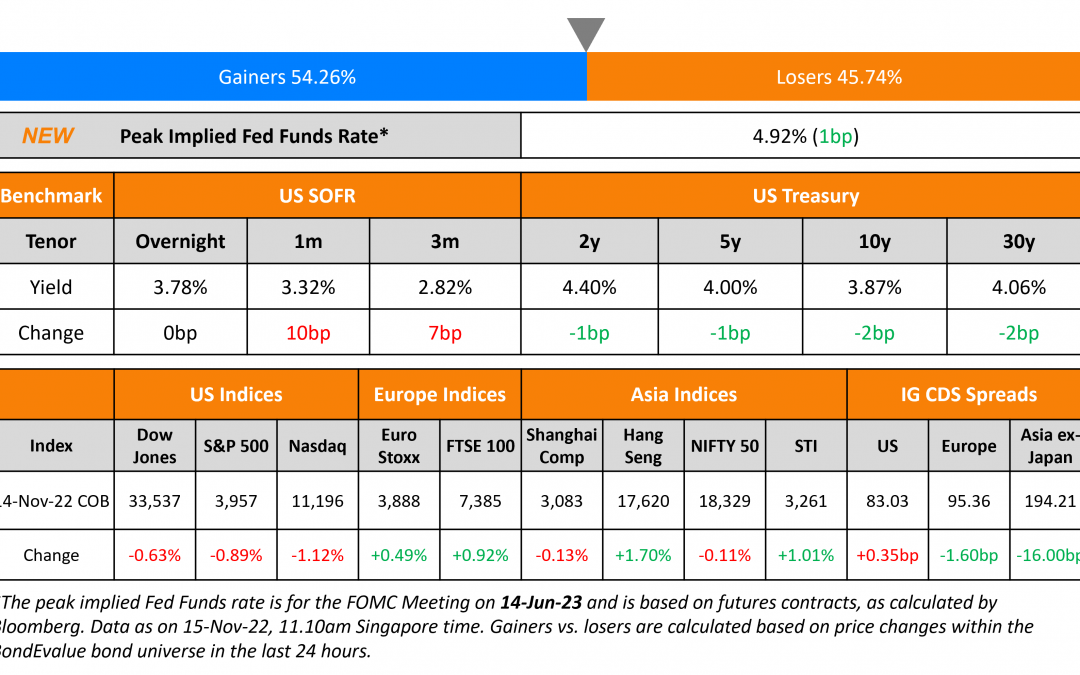 US Treasury yields moved up ~5bp on Monday after Fed governor Waller’s comments on rates moving higher and staying higher for longer, before easing slightly. The peak Fed Funds rate eased by 1bp to 4.92% for the June 2023 meeting. Probabilities of a 50bp hike at the FOMC’s December meeting now stand at 81%. US equity markets dropped with S&P and Nasdaq down 0.89% and 1.12% respectively.

European equity markets on the other hand were broadly higher with the FTSE up 0.92% and DAX up 0.62%. EU Main CDS spreads tightened 1.6bp. Asian equity markets have opened mixed today. Asia ex-Japan CDS spreads witnessed a second consecutive day of sharp tightening, 16bp lower following the 25bp easing on Monday. Meanwhile, India’s CPI came in at 6.77% for October, in line with expectations and below September’s print of 7.4%. 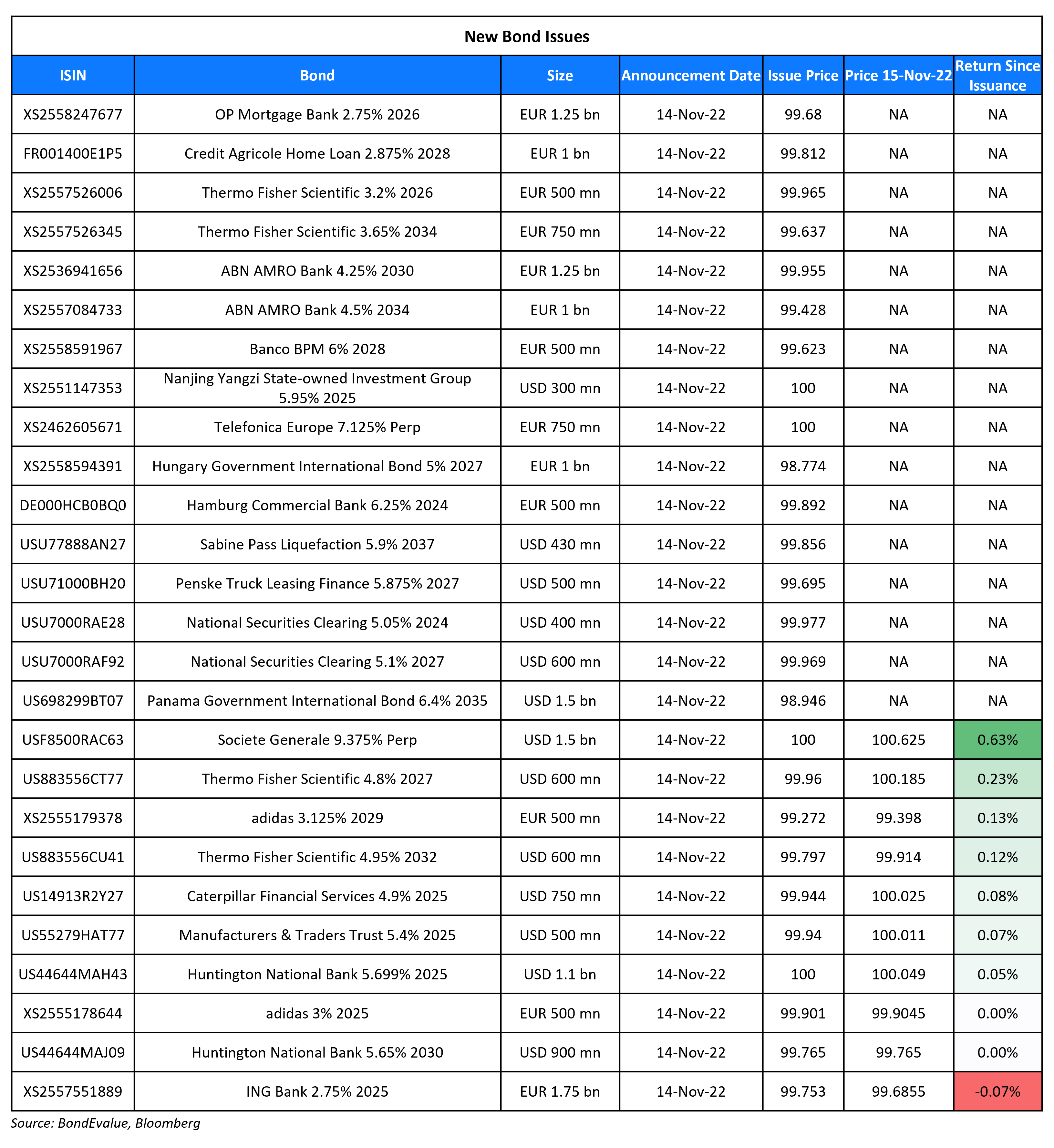 Term of the Day: Reverse-Yankee Bond

On US Skirting Recession in 2023, But Europe Not Being So Lucky

“Britain and the euro zone economies are likely to tip into recession next year, but the United States might make a narrow escape thanks to a resilient job market…At the same time, China’s expected reopening after almost three years of COVID-19 curbs is set to lead a recovery in its own economy and other emerging Asian markets…The U.S. economy just skirts recession in 2023, but the landing doesn’t feel so soft as job growth slows meaningfully and the unemployment rate continues to rise.”

“It is the most aggressive policy so far by regulators to save the property market in China…Overall, we assess that these policies, if implemented, should be able to ease developers’ liquidity pressure markedly in the near term.”

“Together with the previous 250-billion-yuan [US$35.4 billion] bond sale programme support, we view this may mark a turning point for the property sector, as the government is turning to support developers on top of supporting industry.”

“The measures focus on providing financing support to property developers, to ensure house delivery, to help dispose of risky projects, to homebuyers with liquidity difficulties, and for home rental projects…It also extends the grace period for banks to fulfill the property/mortgage cap, a critical move to reduce banks’ concerns when increasing mortgage and property-development loans.”

“We are looking at this with a more favorable outlook…There are still a lot of risks but it seems like some of the tail risk has been clipped, with at least a more supportive measure and this more pragmatic thinking now.”

“The bet was horrendous, and on one hand, you can fault Franklin Templeton for making it because similar wagers in Argentina have always ended in tears. At the same time, people in government were saying all the right things, were credible at the time, and made a lot of promises,” adding that “of course, hindsight is 20/20”

“The country once again finds itself in a place of stagnating growth and high inflation. Although many expect regime change in next year’s elections, its unclear how many dollars will be left in the central bank when a new government takes over, raising fresh concerns about Argentina’s ability to pay its debts” 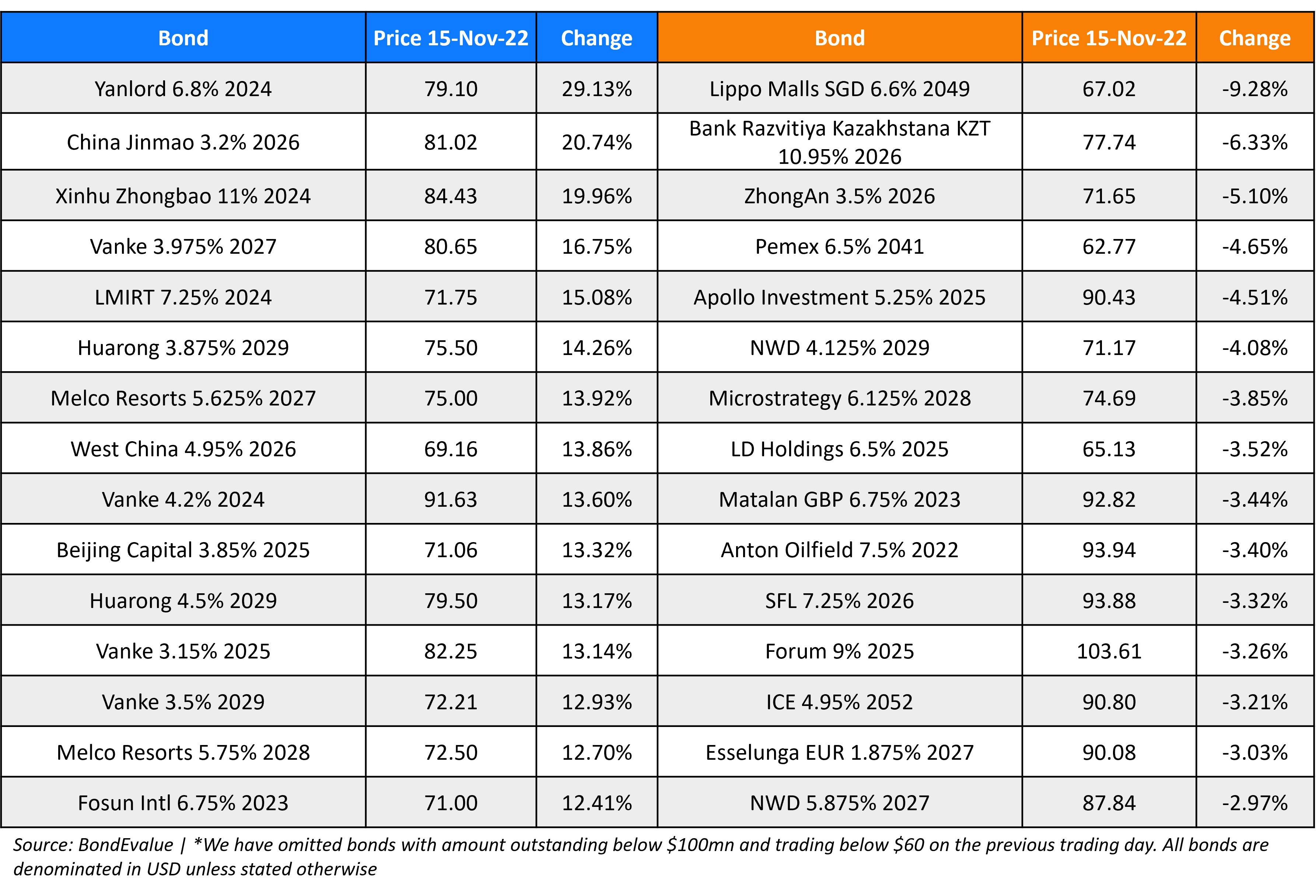