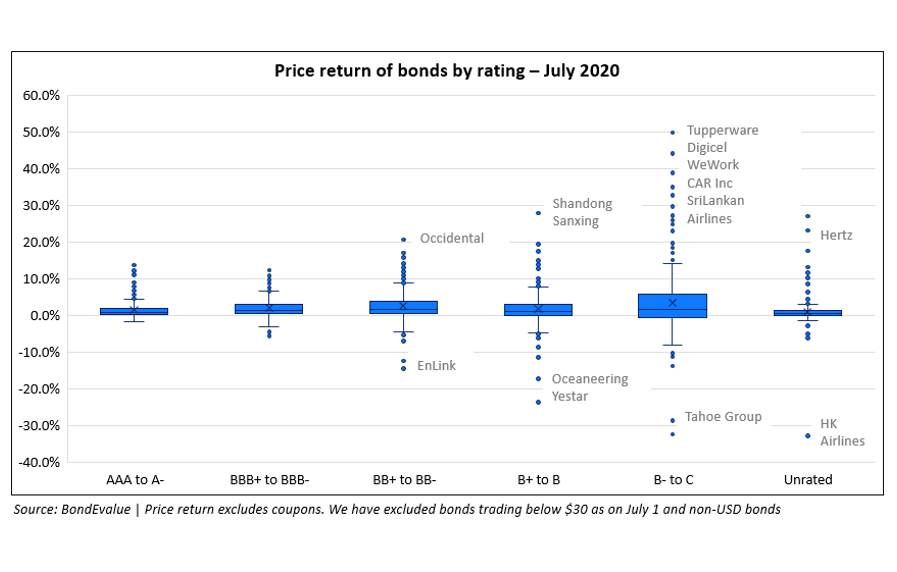 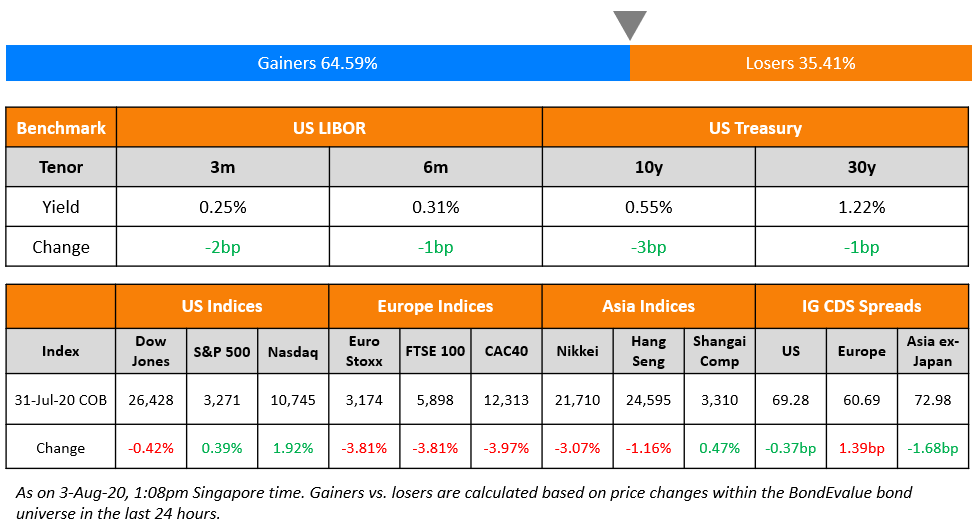 Tech stocks rallied on Friday with Apple surging 10.5% after stunning quarterly results and a four for one stock split announcement. Facebook and Amazon also rallied 8.2% and 3.7% sending major US indices higher. European shares did not do as well as fading growth prospects sent major indices down 0.5%-1.0%. Asian markets are opening higher this morning despite the weekend showing little progress from US lawmakers on the new coronavirus relief bill. Covid-19 continues its spread as even previously sheltered places like Australia have declared a state of disaster in Victoria, the second largest state. US treasuries eased 1-3bp on doubts over the fiscal deal. CDS spreads narrowed 1-2 bp in US, Europe and Asia. 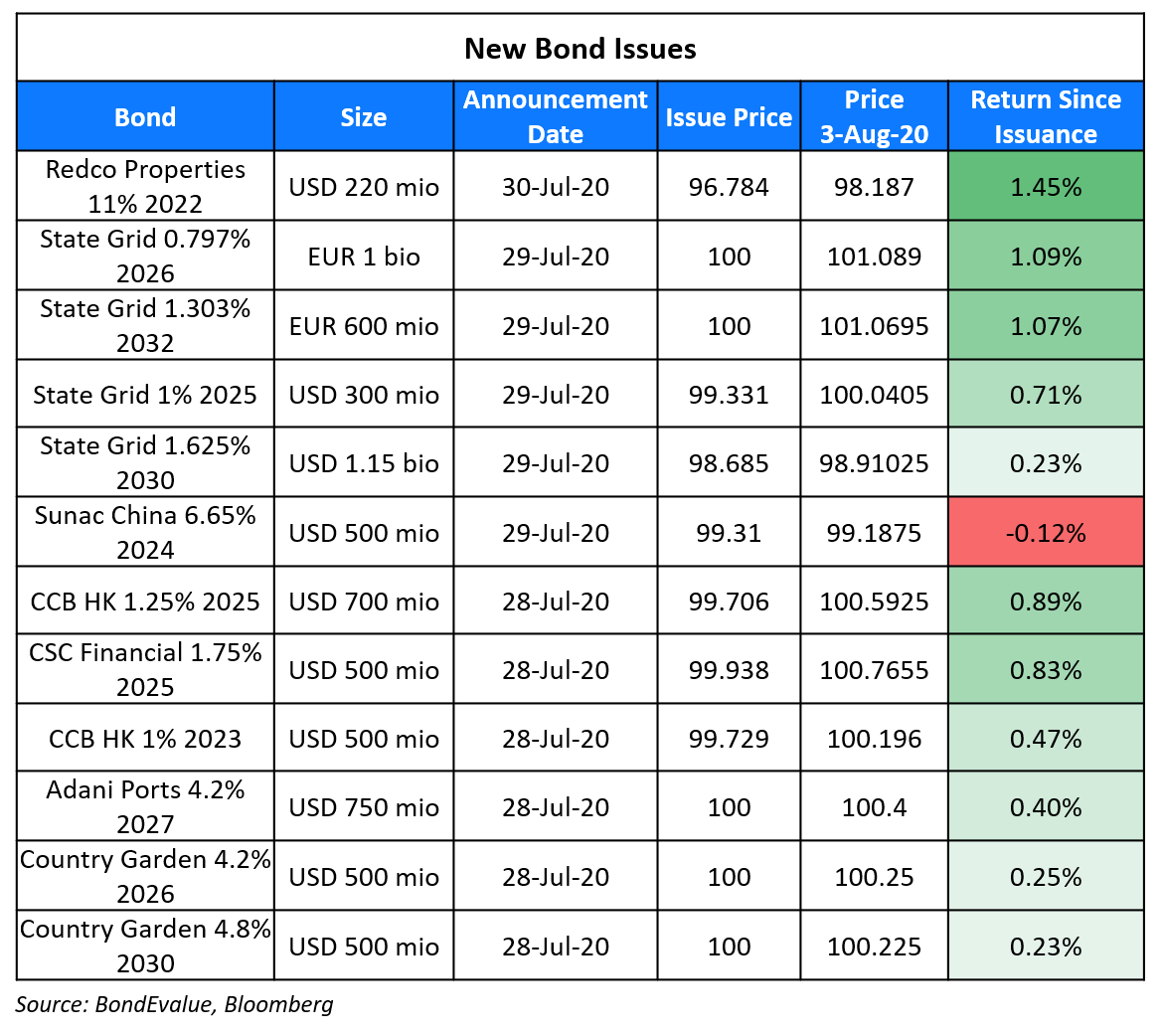 July was a cheerful month for bond investors as 84.2% of all dollar bonds in our universe delivered a positive price return (ex-coupon). This culminated in an unrealized mark-to-market gain of $84bn, calculated by taking a product of the amount outstanding and the July price change for each bond. The box and whisker plot below shows how bonds moved in price terms (ex-coupon) in July by credit rating. The horizontal line inside each of the six boxes indicates the median price return, while the box area above and below it represents the upper and lower quartile respectively. The dots that fall above and below the bounds are outliers with each dot representing a bond. 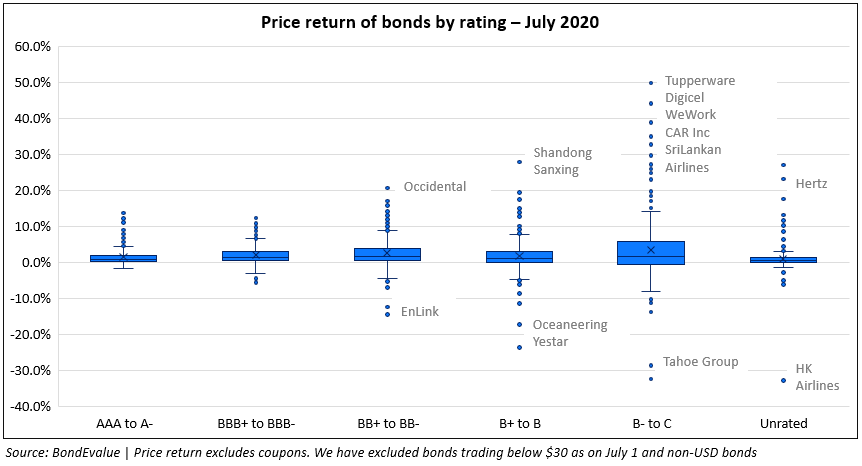 While we witnessed an outperformance of lower-rated bonds in Q2, we saw a preference for higher-rated bonds in July. In the table below, we have summarized the percentage of bonds with a positive price return by credit rating. 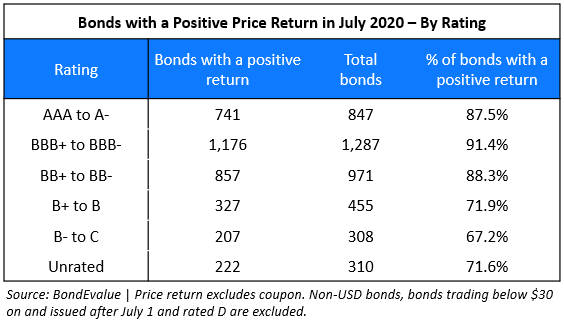 Global dollar corporate bond issuance volume in July fell by 38% over June, at $77.6bn. This seems more of a normalization given the massive debt binge of $796.4bn in the March-June period. 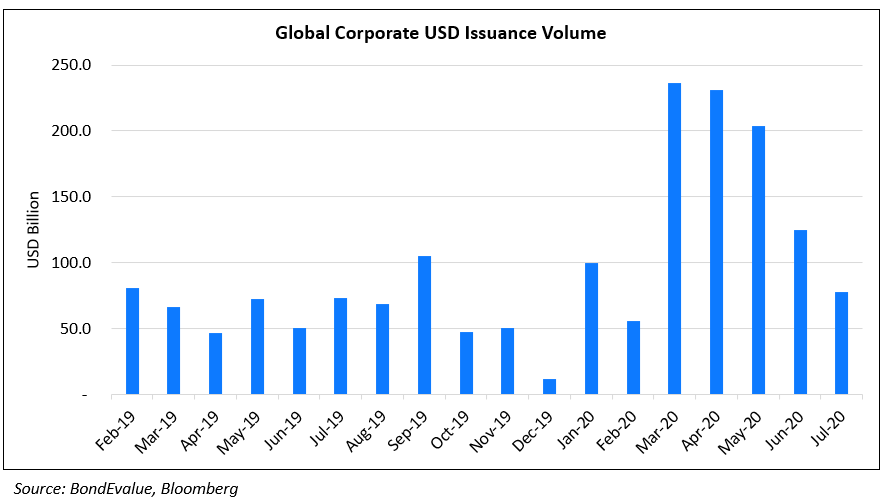 Asia on the other hand continued its debt binge with Asia ex-Japan G3 issuance volume in July at $39.7bn, up 12% over June. 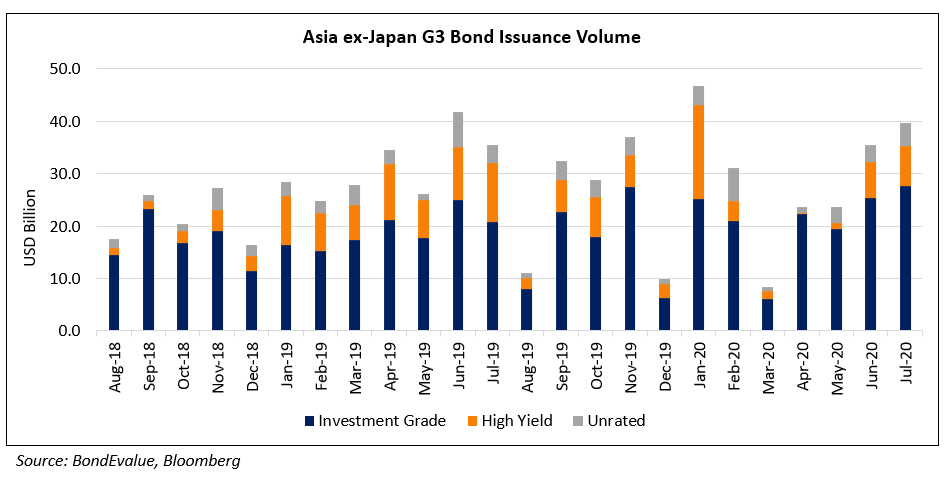 In the tables below, we have summarized the largest dollar deals globally and in Asia in July, sorted by return since issuance. Leading the charts was Takeda with its 50Y bond returning over 10% to investors since issuance, followed by Vale with over 8%. 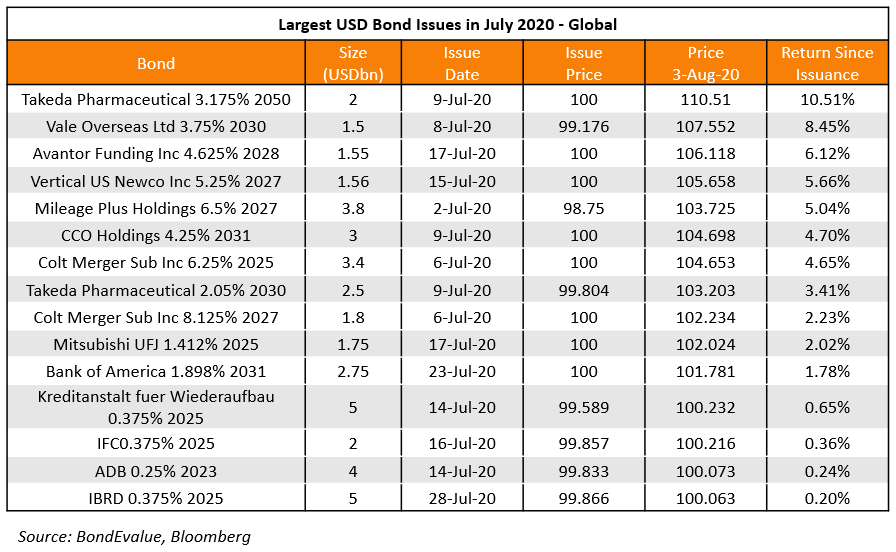 Leading the pack in Asia was Thai state-owned oil company PTT with its 50Y bond returning over 13% to investors who bought the bond at issue price of 100 on July 16. This was followed by Chinese social network company Weibo Corp’s 10Y bond, which returned over 5% to investors since issuance. 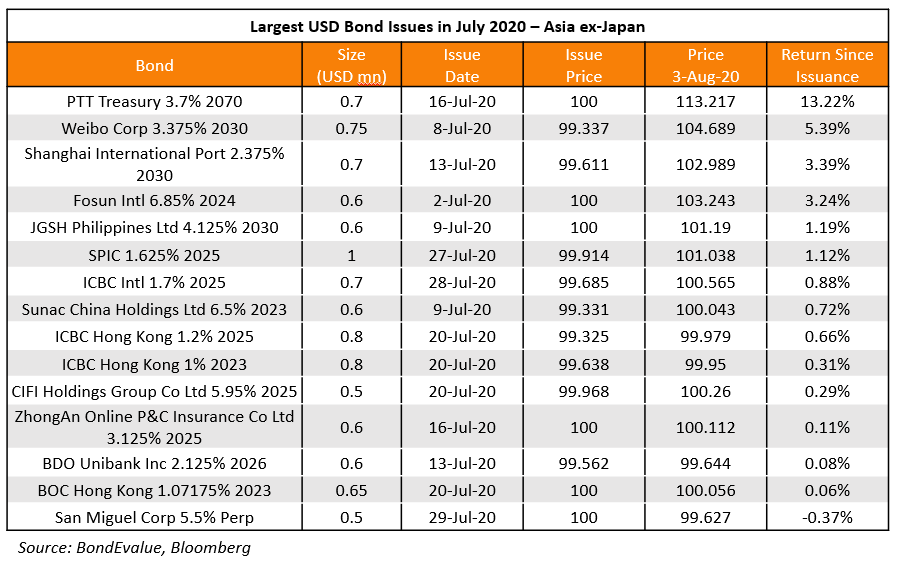 We have summarized the list of bonds that delivered the highest and lower price return (ex-coupon) in July – globally and within Asia – in the two tables below. 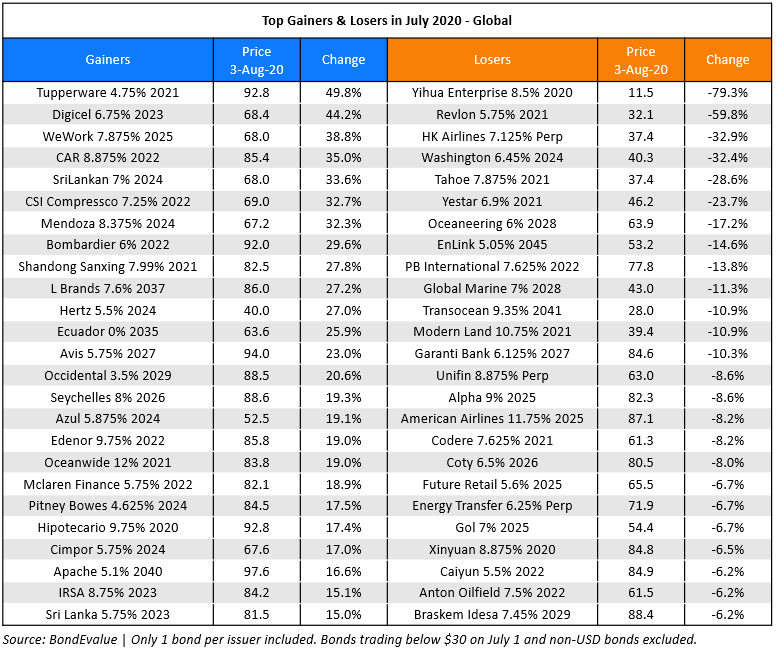 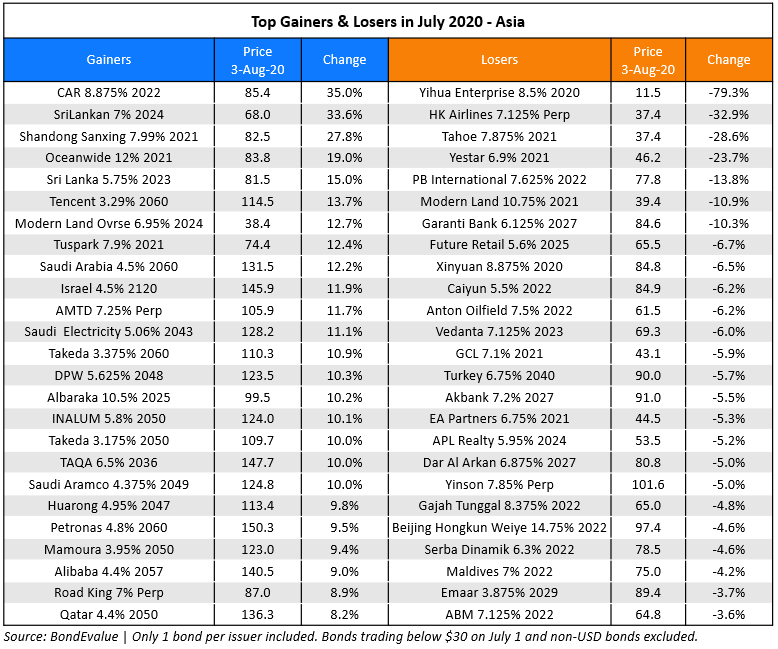 Fitch revised its outlook on US, the world’s largest economy, to negative from stable while affirming its rating at AAA on July 31. With the outlook revision, US joined ranks with several other sovereigns that have witnessed an adverse credit rating action amid the pandemic. The credit rating agency cited deteriorating public finances as well as absence of a credible fiscal consolidation plan as reasons for the action. The US already has the highest government debt among the AAA-rated countries. The AAA rating is supported by the huge size of the economy and the fact that the US dollar is considered the world’s reserve currency, based on which Fitch considers the country’s debt tolerance higher than other economies. However, the fiscal deficits and debt have been rising since even before the pandemic, which required a huge stimulus from the Federal Reserve to inject liquidity into the economy. The government debt is forecasted to increase to 130% of GDP by 2021. The deficit is likely to widen over 20% of the GDP in 2020 while reducing to 11% in 2021. The deficit figure for the first 9 months of FY 2020 starting in Oct 2019 stands at $2.7tn compared with $747bn in the same period last FY. According to the credit rating agency, the US economy will contract by 5.6% in 2020 and recover by 4% in 2021. Fitch also suggested that the aims and policies of the Fed and Treasury are aligned.

Turkey’s dollar denominated bonds fell across the curve late last week. According to data from Tradeweb, the bonds with longer tenor were the worst hit. The 2030 bonds dropped nearly 5 points last week to close at 129.4 on Friday. The implied volatility of its currency, the Turkish lira as well as CDS spreads rose on Thursday as the currency came under fresh pressure due to the depletion of FX reserves and Turkey’s efforts to stabilize the currency. According to IHS Markit data, 5Y credit default swaps added 38bp from Wednesday’s close to rise to 603bps. The central bank of Turkey has sold ~$$110bn worth of foreign currency since early last year to steady the Lira according to traders estimates. The central bank’s net FX reserves have dropped to $$28.7bn last week, which is the lowest level since mid-May. According to analysts, the increase in reserves to $51bn is due to borrowed money or gold. “It is not sustainable. Either they have to allow (the lira) to go, or in a negative scenario you would have capital controls. It stops the bleeding but it also stops trade,” said Viktor Szabo of Aberdeen Standard Investments. The confrontations of Turkey with France and Greece over energy explorations plans in the Mediterranean and its interference has added risks to the Turkish Lira. Turkey’s sovereign and corporate dollar bonds all witnessed a fall in prices through the week ended Friday, July 31. In the chart below, we have plotted the Turkish lira against the US dollar vs. Turkey’s CDS spreads on the secondary axis through 2020. It is evident that a depreciation in the currency leads to a spike in the CDS spreads, a proxy for the creditworthiness of the country. Higher CDS spreads indicate a fall in the perceived creditworthiness of the country. 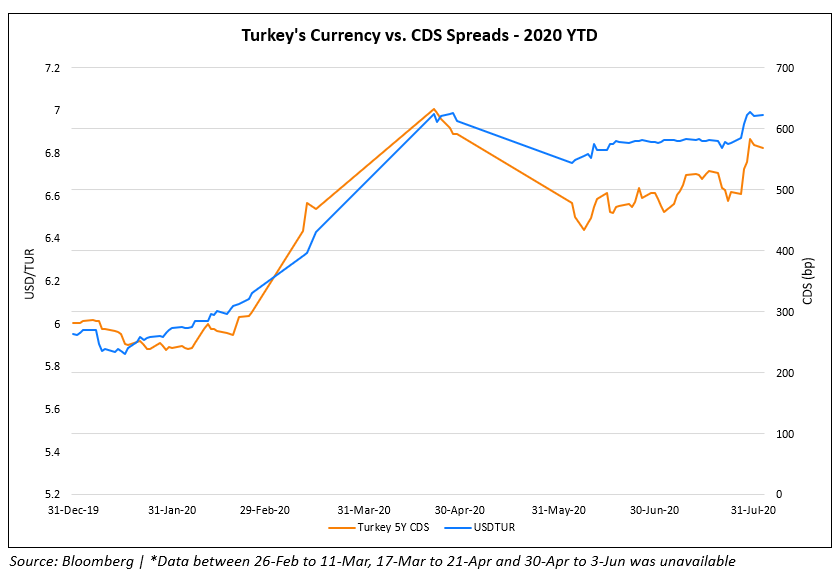 Softbank in Talks to Sell Arm Ltd. to Nvidia

Softbank Group is in advanced talks with Nvidia Corp to offload its chip designer company Arm Inc. that it had acquired four years back for $32bn. If the deal goes through, this could be the largest deal in history in the semiconductor industry. Arm owns the Cambridge technology, which is vital to some advanced electronics. Predominant users of this technology includes players in the smartphone industry including Apple Inc., Qualcomm Inc., Advanced Micro Devices Inc. and Intel Corp. Nvidia is the world’s largest graphic chip maker that is valued upwards of $260bn. An acquisition of Arm Inc. will allow the company to gain entry into the smartphone market. However, since Nvidia is an existing customer of Arm, it could come under regulatory scrutiny as well as opposition from other stakeholders. The stakeholders could demand assurances that a new owner would continue providing equal access to Arm’s instruction set, according to Bloomberg.

Softbank is trying to reduce its debt and has already sold part of its stake in Alibaba Group as well as T-Mobile Inc. Softbank could exit Arm Inc either through a direct sale of the chip designer or through a public stock listing. According to Bloomberg, Arm Inc. could go public by next year. The valuation of Arm Inc has increased with its entry into smart cars, data centers and networking gear. According to New Street Research LLP, the company could be worth $44bn by next year and $68bn by 2025. Softbank’s bonds were largely unchanged this morning.

Debt covenants (also known as loan covenants, banking covenants or financial covenants) are lending restrictions in financial agreements that limit the actions of the borrowers. Lenders typically use covenants to ensure borrowers will operate within certain rules so that borrowers can repay their debt.

On the Fed’s intent to keep interest rates near zero

The Fed is “steadfast, unwavering and unapologetic about [its] desire to keep policy rates low for as long as possible”.

:Rising coronavirus cases and deaths in parts of the US, together with economic indicators suggesting a faltering recovery, have fuelled expectations that the Fed will keep rates anchored near-zero in the years ahead,” said Stein.

On shifting preferences of global funds for bonds over stocks

“Several businesses are still gutted, coronavirus infections are rising around the world and so are the fatality rates, which makes any predictions on economic recovery a gambling bet or at best difficult. Stock markets seem to be running on the former – on hope rather than any meaningful theory,” said a chief investment officer at a large U.S. fund management company.

“Stocks are trading on expectations of a swift business recovery, but where is the recovery coming from? The changing landscape of the virus is even more complex than previously thought, with the first round in many countries not even done. A vaccine is definitely a solution, but there is no clarity.”

“As central bank action reins in spreads we may shift our highest conviction overweight from high quality corporate bonds into higher yielding bonds where risk adjusted returns may be more attractive if default rates are contained,” said Hoyda. “Our allocations will be contingent on the development of the COVID-19 situation.”

“The likelihood will be that fundamentals over hope will better reflect the markets over the next quarter. Clearly we are now in the eye of the storm with respect to COVID-19 damage – the global economy is very weak and fatality rates are still rising, which makes it difficult,” said Lowman.

“A true reflection of the COVID-19 fallout will create pockets of disappointment and opportunity over the next three months, whilst the economic backdrop remains supported by central bank policies and further actions.”

On the worsening health of Indian companies’ balance sheets

“Investors will continue to demand such covenants (Term of the day, explained above) as many companies are expected to be downgraded after lockdowns hit business operations big time,” said Nagarajan. “Bond buyers need to protect themselves in this dynamic situation and will seek tighter bond terms.”

“Issuers are raising big amounts from the bond market because they want to lock in lower borrowing costs, but investors are worried about the credit quality,” said Nagarajan at Tata Asset Management. 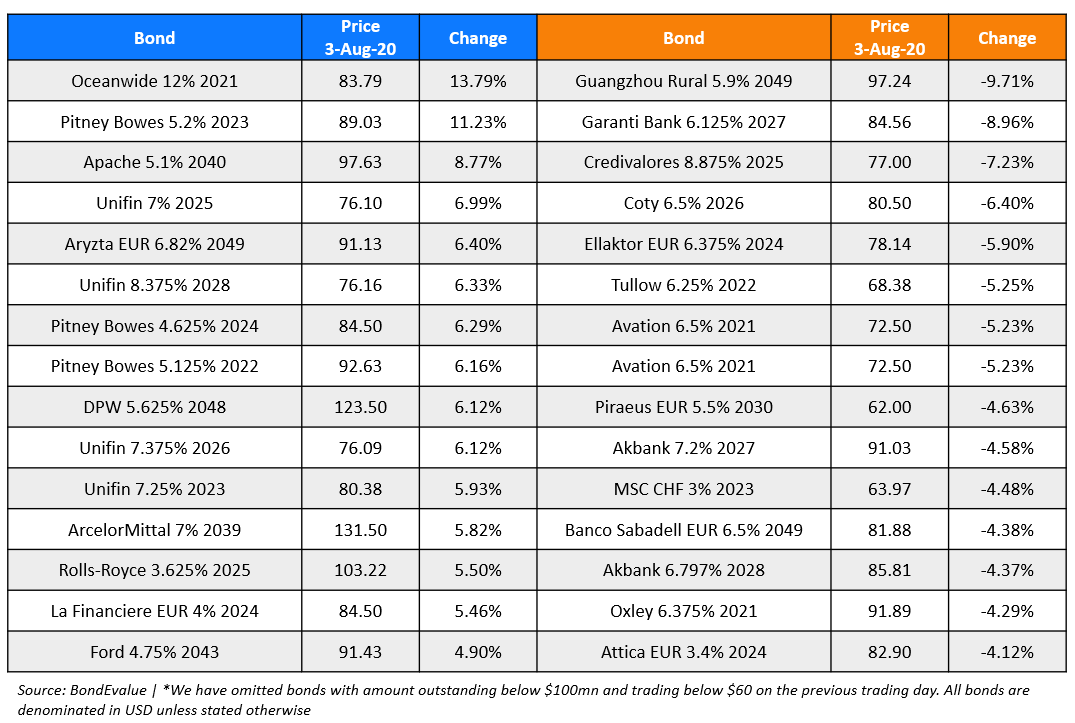