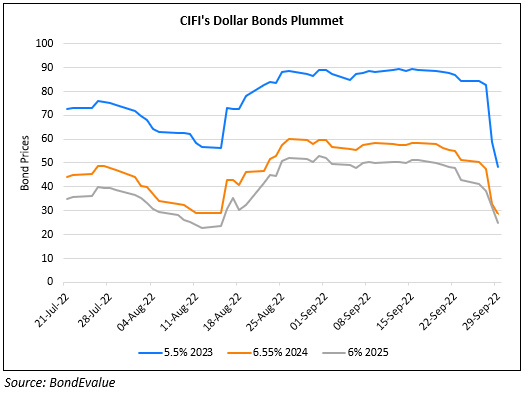 CIFI Holdings’ dollar bonds dropped sharply after a report from Reorg stated that the developer defaulted on an onshore trust loan. As per sources, CIFI had not made payments on “certain nonstandard debt under a project company” and that the developer was in “active discussion” with an unnamed financial firm to reach a “reasonable solution”. The proceeds from the investment trust product were used to finance a property development project in Tianjin district. Details on the size of the trust loan were not given. The news is particularly telling because CIFI was considered among the more stable developers and was chosen as part of an initial group of 16 developers for a pilot program by Beijing to issue state-guaranteed local debt. CIFI had issued RMB 1.2bn ($166mn) of such bonds last week. Besides, IFR reports that an internal letter from CIFI’s chairman Lin Zhong circulated on social media on Wednesday, which said that tighter government controls on escrow accounts exacerbated liquidity pressures, preventing the company from tapping its balance sheet cash to fulfil its needs. He expected the liquidity challenge to endure for a while. CIFI has over RMB 30bn ($4.1bn) of cash based on its latest unaudited statement.

The biggest drawdown was seen on its 5.5% 2023s that has fallen over 34 points in the last two days.