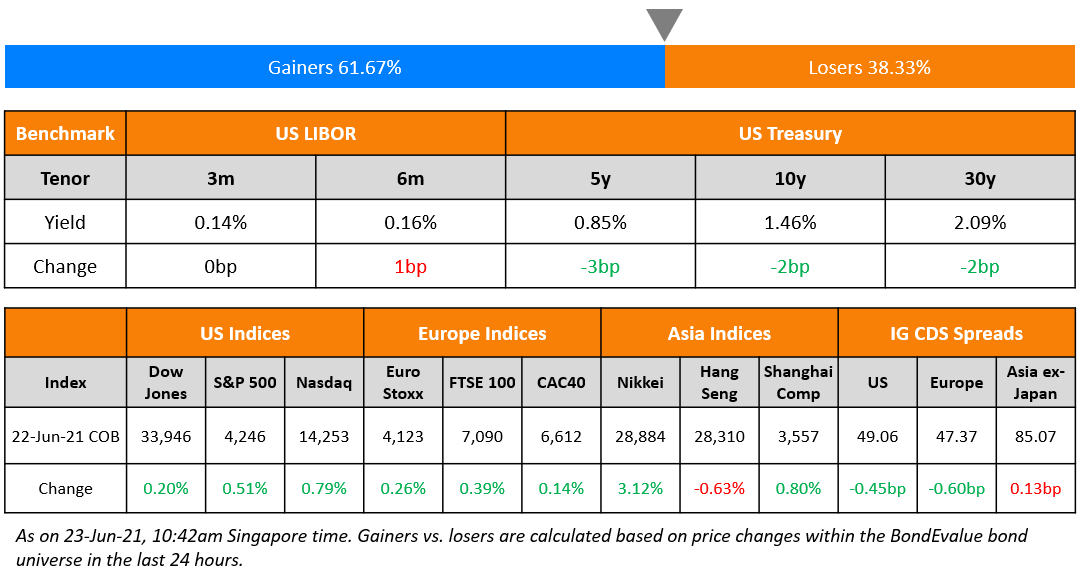 Markets trended higher on Tuesday building up on the fine start to the week after Powell testified before Congress that the Fed is unlikely to raise rates over potential rising inflation. S&P was up 0.5% and Nasdaq was up 0.8% hitting an all time high. Consumer Discretionary and Tech closed up 1% and 0.9% pulling the indices higher. US 10Y Treasury yields tightened slightly by 2bp to 1.46% after Powell’s testimony. European markets remained buoyant – FTSE, DAX and CAC were up 0.4%, 0.2% and 0.1% respectively. ECB President Christine Lagarde forecasted an annual real GDP growth at 4.6% in 2021, 4.7% in 2022 and 2.1% in 2023. US IG and HY CDS spreads tightened 0.5bp and 3bp respectively. EU main and crossover CDS tightened 0.6bp and 2.7bp respectively. Saudi TASI was up 0.3% while Abu Dhabi’s ADX was down 0.5%. Brazil’s Bovespa closed 0.4% down. Asian markets opened higher – HSI up 0.7%, Singapore’s STI and Shanghai up 0.4%, Nikkei up 0.1%. Asia ex-Japan CDS spreads were 0.1bp wider.

New to the BEV App? BondEvalue will be conducting a complimentary session on Navigating The Bond Markets by Leveraging the BEV App today at 5pm SG/HK. This session is aimed at helping bond investors in tracking their investments using the BondEvalue App. 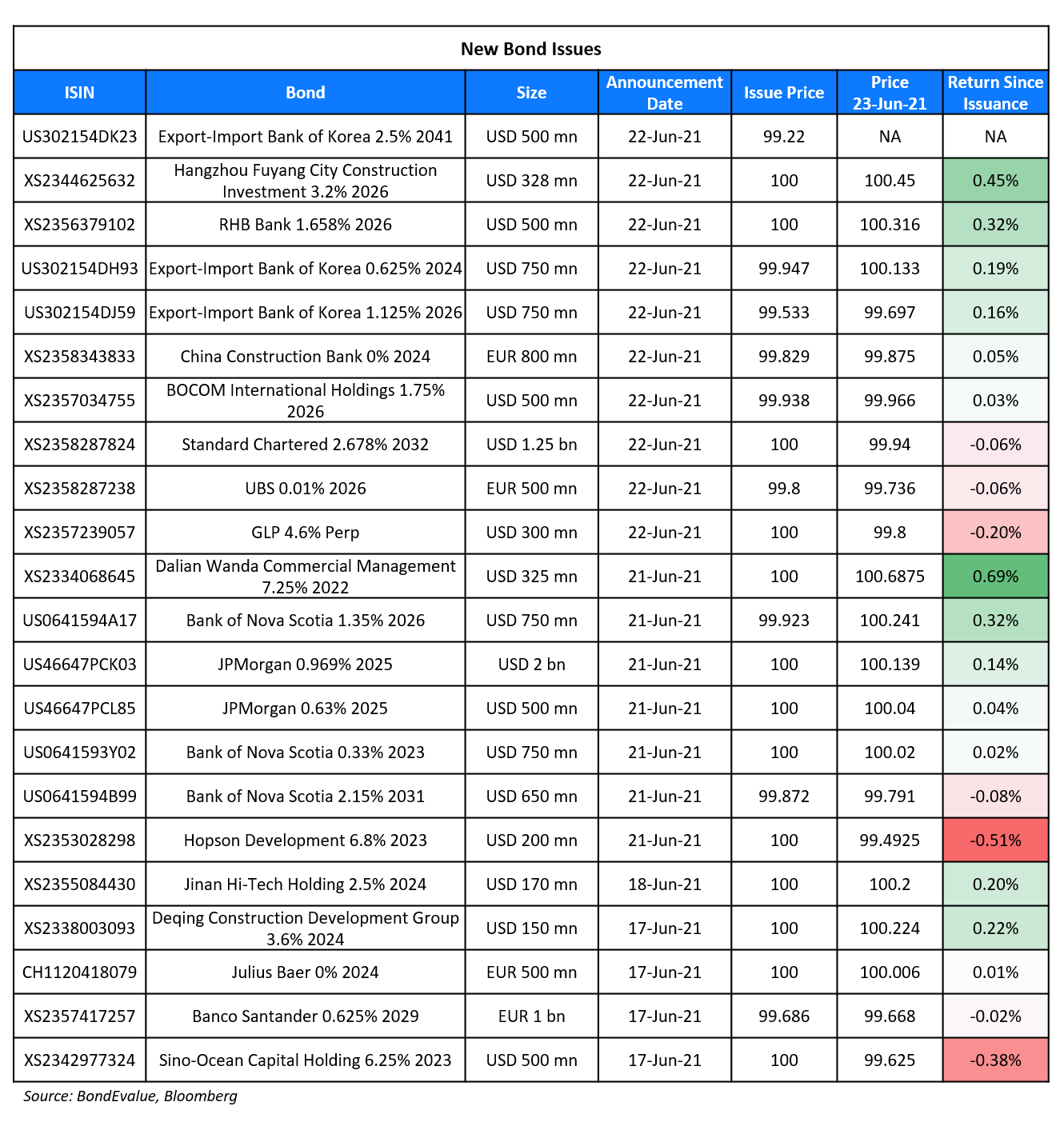 UBS raised €500mn ($596mn) via a 5Y green bond at a yield of 0.05%, 22.5bp inside initial guidance of Mid-swaps + 50/55bp area. The bonds have expected ratings of Aa3/A+/AA- and received orders over €1.8bn ($2.2bn), 3.6x issue size. Proceeds will be used to finance, refinance or otherwise maintain new or existing eligible assets described in UBS’s Green Funding Framework.

CapitaLand China Trust raised S$150mn ($111.3mn) via a 7Y bond at a yield of 2.4%, 10bp inside the initial guidance of 2.5% area. The bond is unrated and received orders over $200bn, 1.3x issue size. It will be drawn from their S$1bn ($744.2mn) multi-currency debt issuance programme. Proceeds will be used for general corporate purposes, working capital needs, investments and debt refinancing. Singapore based fund managers took 90% while private banks and corporate investors took the remaining 10%.

BOCOM International Holdings raised $500mn via a 5Y bond at a yield of 1.736%, 40bp inside initial guidance of T+130bp area.  The bonds have expected ratings of A, and received orders over $3.5bn, 7x issue size. Wholly owned subsidiary BOCOM International Blossom is the issuer and the Hong Kong-listed parent company is the guarantor. Proceeds will be used for general corporate purposes. The new 5Y bonds were priced ~10bp over its 1.886% bonds due July 2025 that yield 1.63%.

GLP, the Chinese logistics property investor, operator and developer raised $300mn via a green Perpetual non-call 6Y (PerpNC6) bond at a yield of 4.6%, 30bp inside initial guidance of 4.9% area. The bonds have expected ratings of BB/BB+. If the bonds are not called in the sixth year, the coupon will reset to the 5Y US Treasury yield + 372.5bp, with a reset every five years thereafter. In year 11 there is a coupon step-up of 25bp, and another step-up of 75bp in year 26, if not called. The bonds have a 50% equity rating credit from the two agencies. The new PerpNC6 is priced 24bp over its 4.5% Perp callable in May 2026, which is currently yielding 4.36%.

Kexim raised $2bn via a three-trancher. It raised:

The bonds have expected ratings of Aa2/AA/AA–. Proceeds will be used for general corporate purposes.

Hangzhou Fuyang City Construction Investment raised $328mn via a 5Y bond at a yield of 3.2%, 45bp inside initial guidance of 3.65% area. The bonds have expected ratings of BBB-, and received orders over $1.1bn, ~3x issue size. Proceeds will be used to repay offshore debt.

Sustainability-linked bonds (SLBs) are bonds wherein the issuer commits to sustainability outcomes within a timeline set in the bond document based on five elements:

Here however, the proceeds can be used for general purposes but the characteristics of the bond can change depending on the issuer meeting their KPIs set in the document. Shui On Land has hired banks for an SLB issuance. Novartis last year issued an 8Y zero-coupon €1.85bn sustainability-linked bond (SLB) where they would pay a 25bp coupon step-up if they fail to hit the key targets incorporated in the deal structure. The key targets are that Novartis increases “innovative therapies patient reach by 200%” and that its “flagship programmes reach by 50%” before 2025.

Jerome Powell, Federal Reserve Chairman
“We will not raise interest rates pre-emptively because we fear the possible onset of inflation. We will wait for evidence of actual inflation or other imbalances.” “We will not just look at the headline numbers for unemployment.” “We will look at all kinds of measures … That is the most important thing we can do.”
Jim Jordan, Ohio Republican Representative
“We have unstable employment and higher inflation.” “Something has to give.”
James Clyburn, South Carolina Democratic Representative
“Millions of Americans are depending on the Fed to continue to support the economy’s recovery.”
On the view that the Fed is in a position to taper threshold this year – Mary Daly, San Francisco Federal Reserve President
“I am bullish on the recovery.” “Substantial further progress [towards Fed’s 2% inflation goal]… within our line of sight – I think it’s possible we could even get there some time late this year, early next year.” “We are not there yet, but it is appropriate to start preparing for the time we would hit that threshold.” “I am really looking to the fall to get some more clarity about the future path of the economy.”
On Fed chairman’s testimony proof that US president’s economic plan is working – according to a White House official
“As you know, we do not comment on the Fed’s monetary policy decisions.” “But their updated forecasts last week reaffirm that President Biden’s economic plan is working and that America is on the move again, and Chairman Powell reiterated this today in his congressional testimony.” “That’s the story of President Biden’s presidency after just five months in office: economic growth is up, unemployment is down, and America is roaring back thanks to the President’s leadership.”
On no need for Qatar to tap debt markets unless for opportunistic reasons – Ali bin Ahmed Al Kuwari, Qatar’s acting finance minister and the Minister of Commerce and Industry
“Only to be opportunistic, but from a deficit and budget perspective, if the situation continues, we should be in a good situation.”
On global economy performance surpassing pre-pandemic peak – Sara Johnson, IHS Markit’s executive director for global economics
“As recovery from the Covid-19 recession is completed, the global economy is moving into the sweet spot of the current expansion.” “World real GDP growth is picking up from an annual rate of 1.5 percent quarter on quarter in the first quarter to rates of 6.0-7.0 percent over the remainder of 2021.”