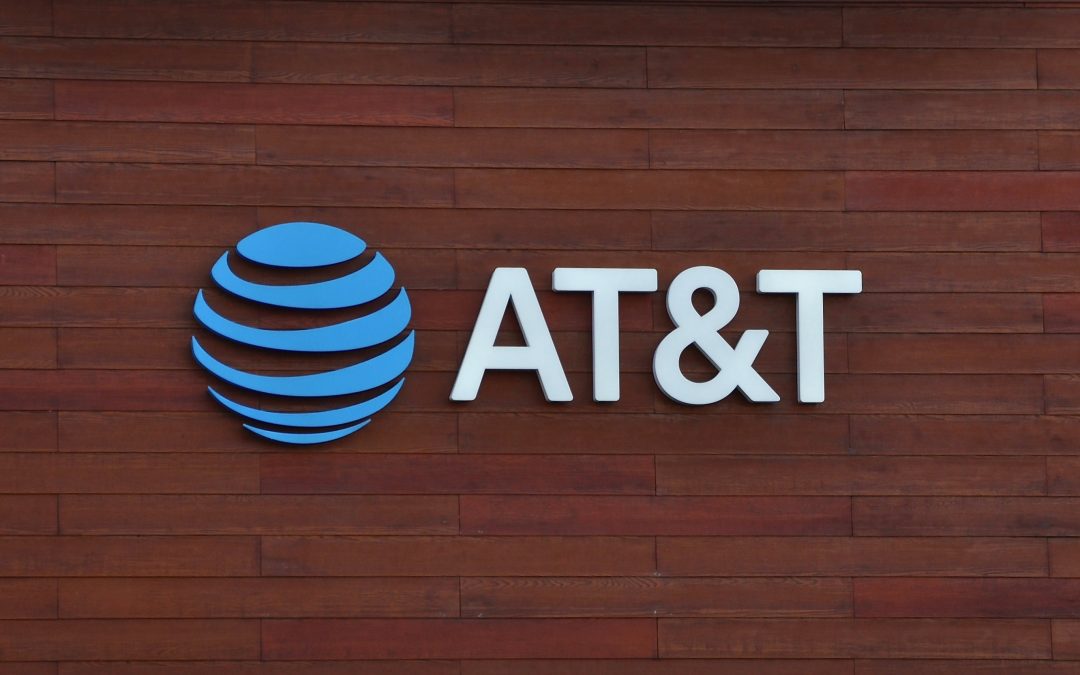 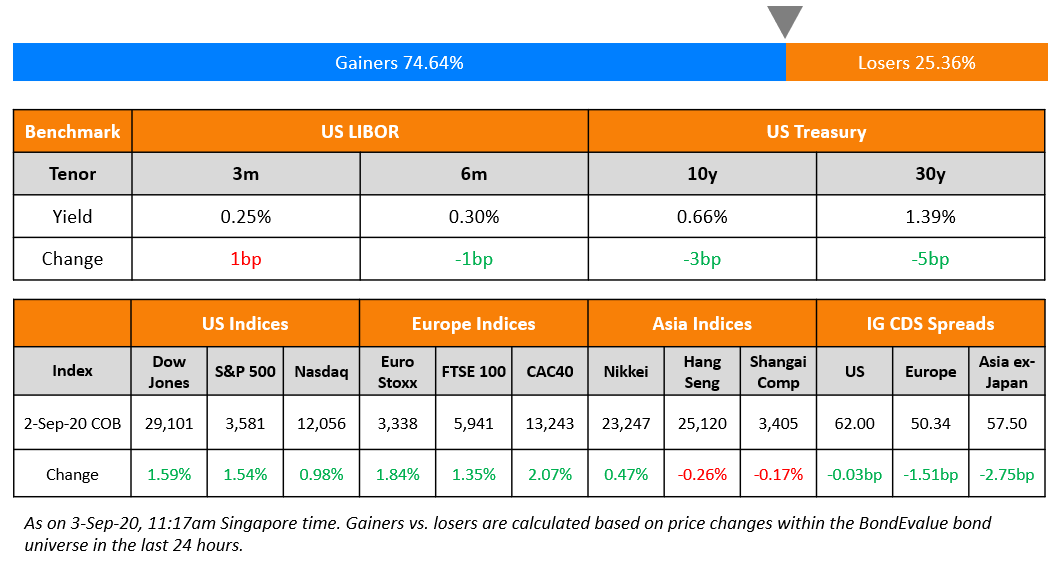 Despite a disappointing ADP employment report (428,000 vs 950,000 expected), Wall Street continued its rally setting new record highs overnight. Factory orders for August were up 6.4% vs an expected 6% and the Fed’s Beige Book survey revealed a modest increase in business activity and employment towards the end of last month despite indicating weak economic growth in some parts. European shares also tracked the rally on Wall Street with technology, chemical and industrial stocks leading the way. Treasuries continued their rally from yesterday recovering from earlier losses and long end yields declined 2-4bp. Asian dollar bond credit spreads have dropped to their lowest since early March even as we see a rush of issuance. Asian markets are opening higher this morning. 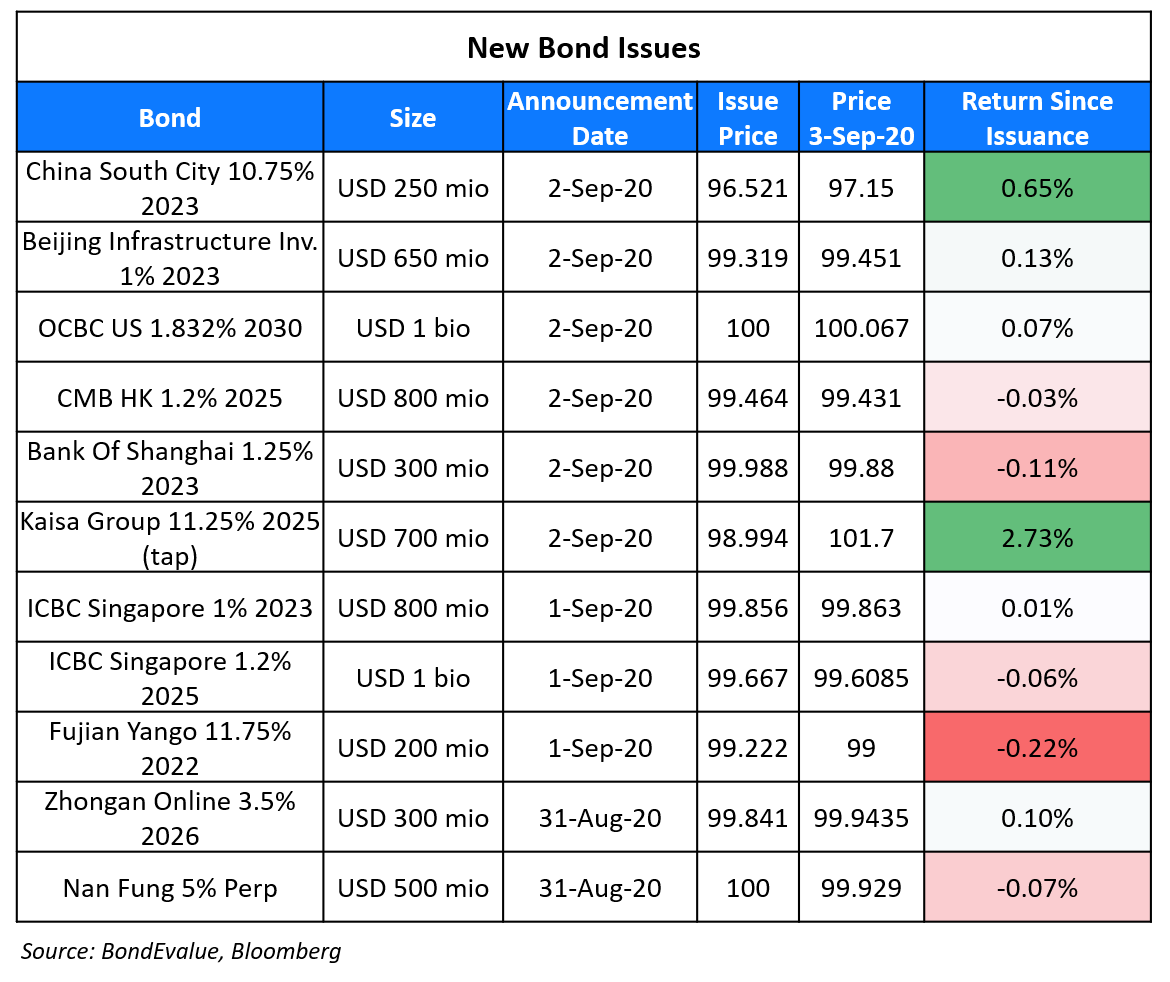 Oversea-Chinese Banking Corp (OCBC) raised $1bn via 10Y non-call 5Y (10NC5) tier 2 bonds to yield 1.832%, 158bp over Treasuries and 42bp inside initial guidance of T+200bp area. The bonds are expected to have ratings of A2/BBB+/A. This is OCBC’s first public dollar offering since 2014. The bonds will be permanently written down in part or in full if the bank is declared non-viable by the Monetary Authority of Singapore. The bonds have a one-time issuer call option at par in 2025, subject to the prior consent of the MAS. Coupons are fixed for the first five years and reset thereafter to the then prevailing 5Y Treasury yield plus the initial spread of 158bp with no step-up if the bond is not called.

Germany raised €6.5bn via its debut green bond issue, the first among a series of twin bond issues. The 10Y bonds priced to yield negative 0.463%, a 1bp premium to its conventional twin bond. The bonds met with solid investor demand despite its negative yield with orders exceeding €33bn, over 5x issue size. German deputy finance minister Joerg Kukies told Reuters, “With today’s issue of the government’s first green bond, we have taken an important step towards significantly strengthening Germany as a sustainable finance location.” Germany plans to issue more green bonds across maturities in a bid to develop a green yield curve that can act as a benchmark for countries and corporates to issue green bonds. The twin bonds have a unique characteristic wherein investors can swap the green bond for an otherwise identical conventional (non-green) bond to mitigate liquidity risks.

AT&T Considering a Sale of Xander, Direct TV and Crunchyroll to Pare Debt

AT&T seeks to cut its sizable debt accumulated after the purchase of DirectTV and Time Warner through a portfolio restructuring of its businesses under the new CEO John Stanley. The company, which has transformed itself from a telecommunication major to a media conglomerate seems to be increasing its focus on the entertainment business. As per Bloomberg, the conglomerate is looking at a possible sale of some of its businesses including Xander, the digital-advertising unit; DirectTV, satellite-TV service; and Crunchyroll, the animation streaming service. Xander has evolved through the purchase of AppNexus for ~$1.6bn in 2018 and aimed to exploit AT&T’s TV ad space on channels like TNT and CNN as well as its wireless subscribers. However, due to lower than expected revenues, the subsidiary was merged into WarnerMedia. The sale of Xander digital advertising unit indicates AT&T’s lack of interest in the online ads sector.

At the same time, the company removed its Warner Bros. video-game business from the list of non-core assets put up for sale under the new leadership as it considered it ‘too valuable to unload’. The potential sale of the video game business had generated interest from the likes of Microsoft Corp., Take-Two Interactive Software Inc., Electronic Arts Inc. and Activision Blizzard Inc. Another reason to abort the sale could be the upcoming release of a potential popular interactive Harry Potter game that could gain traction given that people are seeking alternatives to movie entertainment due to the ongoing pandemic.

Tesla’s bonds (steadily) rose to a record high of over 104 on Wednesday after the automaker’s announcement of raising ~$5bn via a sale of equity shares. The share sale would strengthen Tesla’s balance sheet and result in lower leverage ratios. As per Tesla’s SEC filing on Tuesday, the company will issue new shares in an “at the market” (ATM) offering. An ATM offering allows a company to sell shares to investors directly via broker-dealers at current prices. This comes after a 5-to-1 stock split, which came into effect this past Monday, making its stock “more affordable” to retail investors. The split was announced on August 11 and led to a rally of over 70% since then even though a split does not entail any dollar amount changes to its balance sheet.

The company’s bonds have rallied 30% since its life-low of ~80 amid the March mayhem earlier this year. The rally in its stock has been even sharper, skyrocketing 5x since its low of $72 in late March to $447 currently. The company is planning to roll out new models and seems to have recovered from the effects of the pandemic. According to Wedbush analyst Dan Ives, the automaker’s stock sale is a “smart move at the right time,” and added the company should “further firm up its growing cash position and slowly get out of its debt situation”. The company’s electric car revolution seems to resonate with investors pushing its market cap to $417bn, compared to Ford Motor’s market cap of $28bn and Fiat Chrysler’s market cap of $17bn. 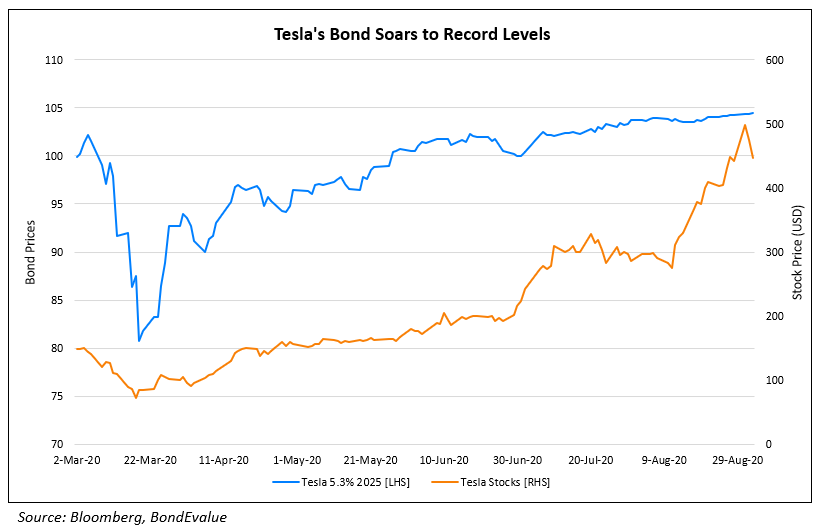 Fixed-for-life perpetuals, as the name suggests, are a perpetual bond structure that offers a fixed coupon through the life of the perpetual. This structure is commonly seen in low interest rate environments as issuers entice investors with a relatively higher coupon compared to benchmarks for that currency. Investors must be wary about fixed-for-life perps as the option to redeem the bonds typically lie with the issuer as a call option. Should interest rates rise in the future, it would be economically beneficial for the issuer to not redeem these perps and continue to pay a lower coupon for perpetuity.

“We have headroom to do materially more quantitative easing if we need,” Ramsden said. “We have the operational and other capabilities to do it fast if market dysfunction required that. So we can influence both the size and pace.”

On the risk of becoming overly reliant on fiscal and monetary support and the need to scale back – Jens Weidmann, president of Germany’s central bank

“Fiscal policy should not get used to a lax course, nor should it rely on interest rates to remain so low in the long run. That is why it is important to reduce the high debt ratio after the crisis. In view of the high national debt, the pressure on the central banks to adhere to the loose monetary policy longer than necessary could increase,” he said. “After the crisis, the emergency monetary policy measures would have to be scaled back again,” he added. “In addition, it must be clear that if the price outlook requires it, then monetary policy as a whole must be normalised.”

“There has been a phenomenal amount of issuance,” said Tchir. “It’s been the busiest summer I have ever seen. It’s felt like we have been setting issuance records month after month.”

On the loss of profit for China’s largest banks due to bad loans – Jason Tan, research analyst at CreditSights

“The brunt of the asset quality pressures might not have come through yet because of the still existing moratorium on the repayment of loans as well as its interest payments,” he explained. “So, these will probably come in the second half, if not in the first half of 2021 when the moratorium lifts in March 2021,” he added.

On the K-shaped recovery for emerging markets as rich get richer – Rob Subbaraman, global head of macro research at Nomura Holdings Inc.

“In the EM world with rapidly rising debt and deep recessions, the cost of servicing debt is going to get more burdensome and we cannot rule out some financial crises or major debt restructuring.”

On developing-nation assets as the “only game in town” – Sergio Trigo Paz, BlackRock fund manager

“There’s no quantitative easing available, or just very little, so you get a natural selection in emerging markets,” Trigo Paz said in an interview. “You’re going to get the survival of the fittest, but the good news is that you’re going to get paid for the risk you’re taking.”

In a report by Bob Prince, Co-Chief Investment Officer at Bridgwater Associates, and his team

“It is pretty obvious that with interest rates near zero and being held stable by central banks, bonds can provide neither returns nor risk reduction,” a team led by Prince wrote.

“You cannot just say because bond yields are low, they’re going to rise and let’s not invest in government bonds,” said Boston-based Qian. “That’s contradictory to the risk-parity approach.” 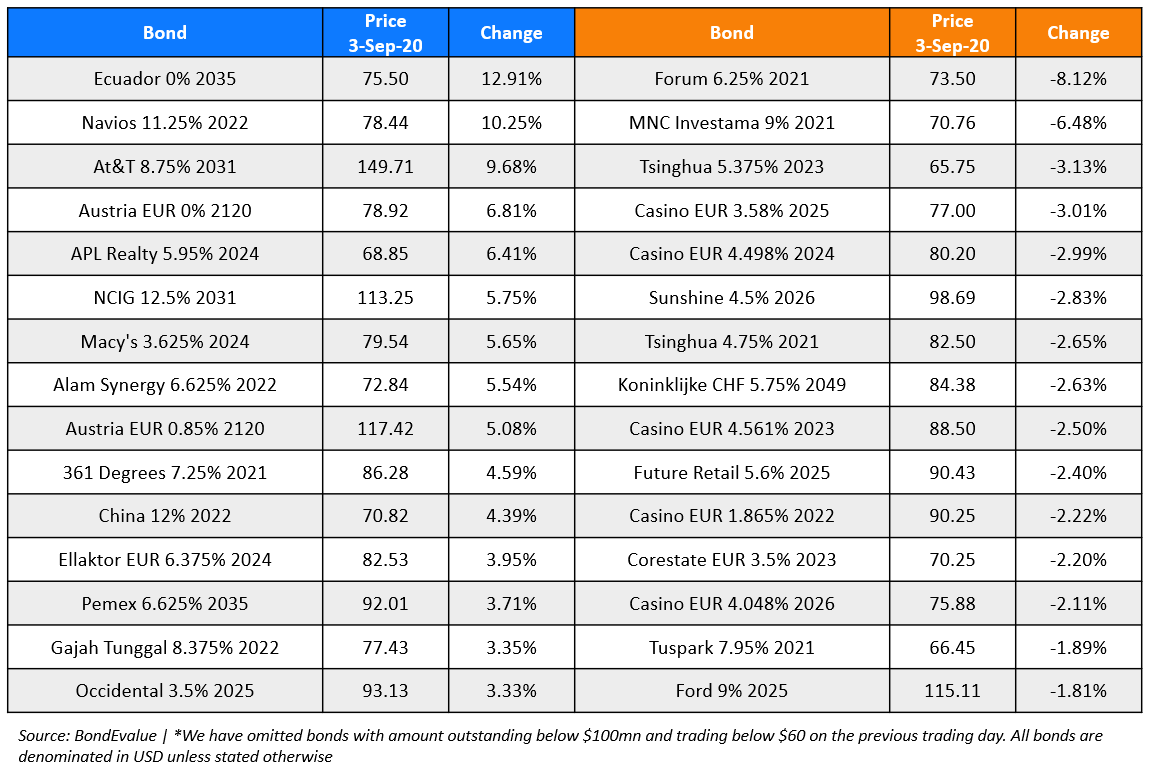