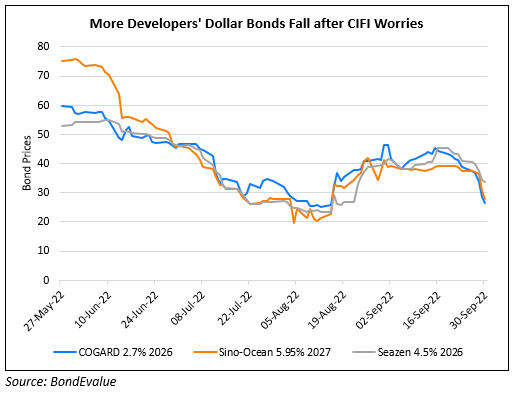 Dollar bonds of Country Garden (COGARD) fell as much as 10 points while those of others, including Sino-Ocean, Longfor and Seazen, dropped around 6 points after news that CIFI Holdings defaulted on an onshore trust loan. These developers are considered among the more stable names in China’s real estate sector, who were chosen in a pilot program by Beijing where their local bond issuances would be guaranteed by the state. The latest news regarding CIFI seem to have fueled investor concerns over the other developers, going by the fall in their dollar bonds on Thursday.

Separately, the PBoC said that China will accelerate the use of targeted loans to ensure delivery of property projects and will increase such loans when needed. In addition, the PBOC and China’s banking regulator said that qualified cities can maintain, lower or remove the minimum interest rate on a first-home loan, in an effort to revive homebuying confidence in the market.