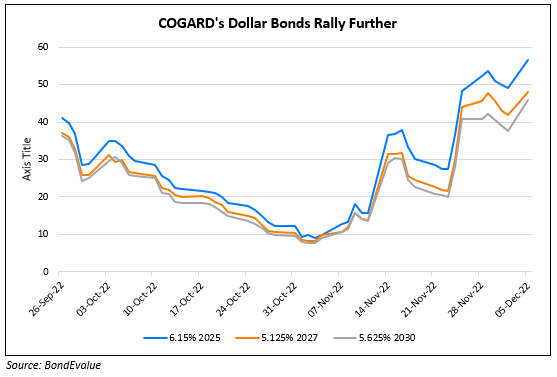 Country Garden’s dollar bonds rallied by 10%, with the developer along with Midea Real Estate planning to issue bonds along with derivatives that allow investors to buy partial or full protection against the issuers defaulting, as per Bloomberg. They noted that both the developers could become the first  repeat issuers of such deals since May when the program was launched by regulators. The issuances are packaged in such a way that bond buyers have the option to purchase credit protection contracts (akin to CDS), offering insurance against default linked to a specific bond or loan obligation. Both developers have not commented yet on the deals. Both developers have not commented yet on the deals, nor is there any information on who will provide the protection against default.

Separately, Chinese regulators have asked Bank of China, CCB, ICBC and AgBank of China to issue offshore loans to help developers repay overseas debt, as per sources. They note that the regulator has set a date of December 10 by which banks will make 3-4 offshore loan proposals secured against domestic assets. Later on as the scheme expands, more banks will be added they said. One source said that developers will qualify if their balance sheets are seen as being of “good quality”, giving out select names like CIFI Holdings, Longfor, Seazen, COGARD and Midea.