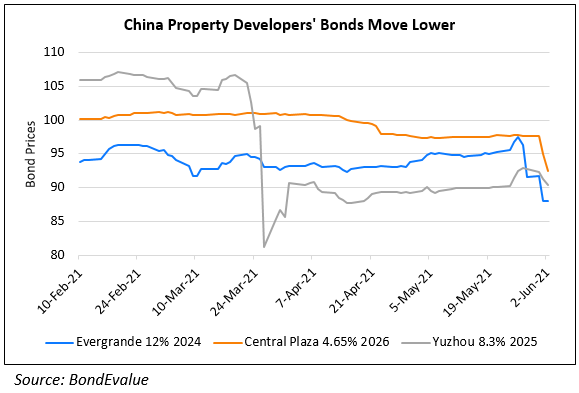 Evergrande’s (B2/B+/B) dollar bonds continued to slide, this time pulling bonds of peers Yuzhou (B2/B+) and Central Plaza/Beijing Capital (Ba3/BB+/BB) along. Evergrande’s 12% 2024s were down over 4% to 88 cents on the dollar continuing the decline since news of the CBIRC launching a probe into its transactions with Shengjing Bank Co. Yuzhou’s bonds also fell with their 7.85% 2026s down over 2.3% yesterday to 85.3. Yuzhou was downgraded to B+ by Fitch in April due to weaker-than-expected revenue recognition in 2020, and high reliance on sales through unconsolidated JVs and associates relative to peers. Central Plaza’s bonds also skidded with their 5.7% Perps down 4 cents in the last four days to 87.6, yielding 10.1% while its 4.25% 2026s fell 2.4 points yesterday to 92.5, yielding 6.4%