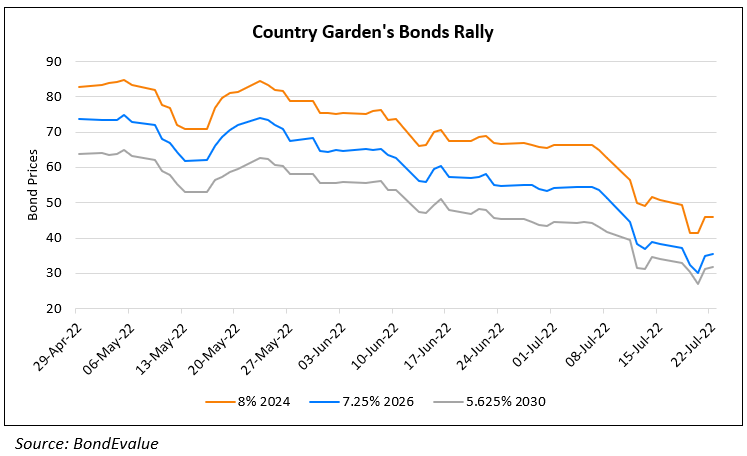 Country Garden’s dollar bonds rallied yesterday after Chinese authorities pledged to cooperate more closely with local governments to ensure that unfinished property projects will be completed on time. This comes amid a wave of mortgage boycotts across China, where homebuyers have refused to pay their mortgage loans due to continuous delays in the construction projects. Additionally, Bloomberg also reports that there are other signs of stress in the Chinese credit market. This includes a state-backed developer seeking delays on $.16bn of dollar notes and the default of a private builder, which was deemed healthy just months ago. The current situation in the Chinese real estate sector reflects a burgeoning uncertainty that has spilled over from private developers, to those with government backing and companies in other industries. If the stress continues to grow and is not handled well, it could pose a severe threat to China’s economic stability.

Separately, China Vanke, which is the country’s second largest builder, issued a CNY 3bn ($444mn) bond. Bloomberg notes that the 3Y green note was priced at a 3% yield. Like most other developers, it faces pressure from the mortgage boycotts and suppliers refusing to pay loans. Even though China Vanke is rated investment grade at Baa1/BBB+/BBB, its issuance of this onshore bond indicates the property sector’s challenges in raising money, especially from offshore avenues. Bloomberg adds that many developers have been shut out of debt markets, which compound the liquidity issues they have, as slumps in home sales limit another key funding source.