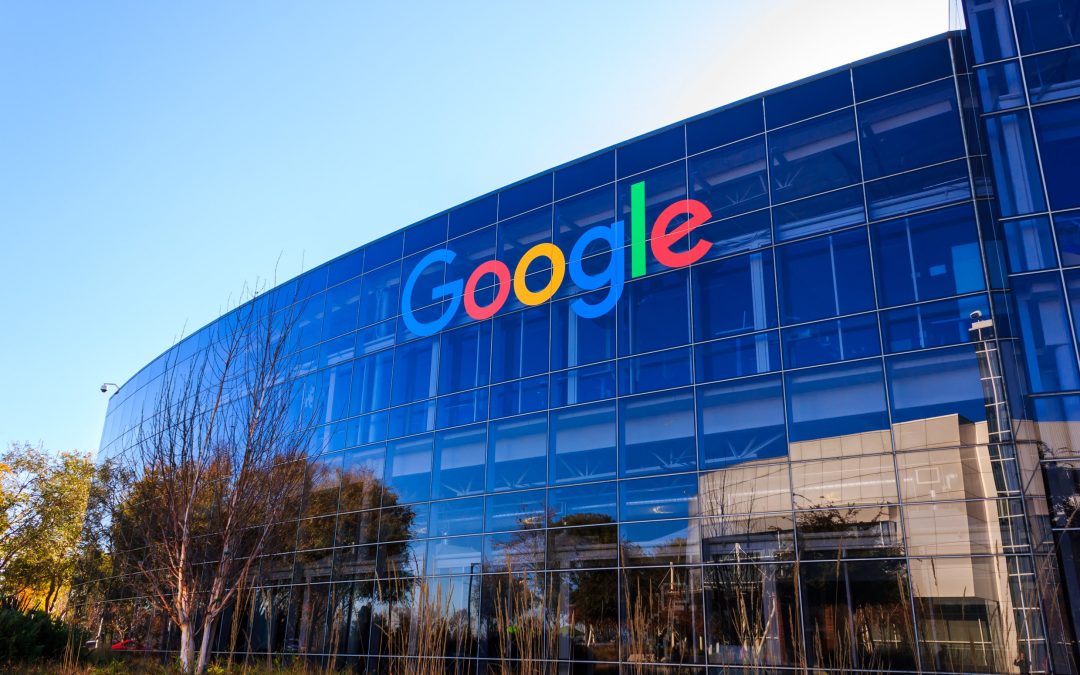 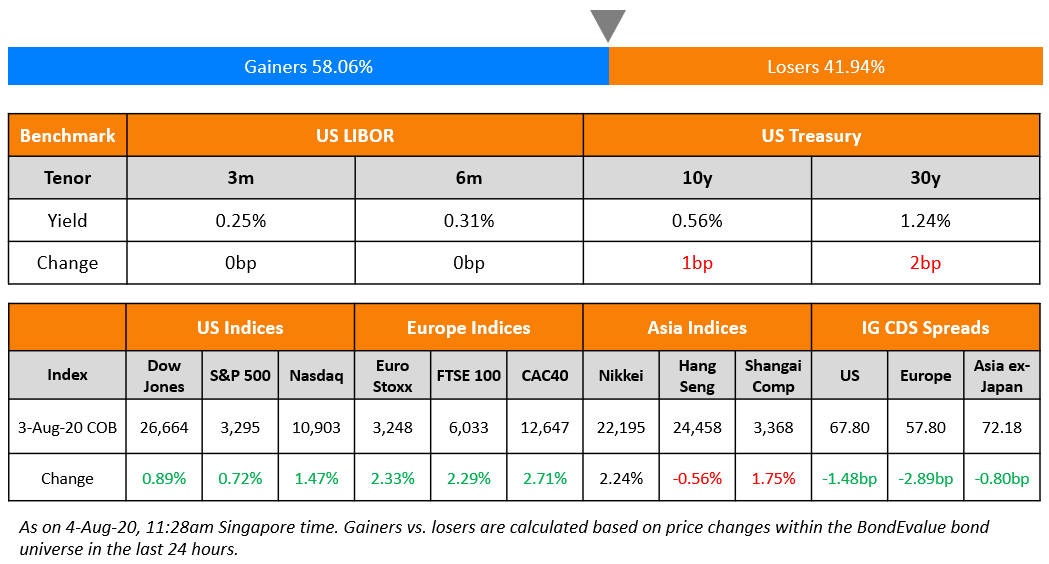 Strong manufacturing activity in July lifted sentiment and saw western markets rally overnight. Eurozone and UK IHS Markit’s July PMIs climbed to 51.8 (vs 47.4 in June) and 53.3 (vs 50.1 in June) respectively while UK services PMI jumped to 59.3. This data along with reports of progress between Republicans and Democrats regarding the new stimulus package led to the improved sentiment. Microsoft shares jumped 5.6% as it pursued the purchase of TikTok and helped Nasdaq set another record high at the close. US treasuries lost some ground with the long end firming up a few basis points and CDS spreads narrowed 2-3bp. Asian markets are having a strong opening this morning higher by 1-2% following the overnight rally. 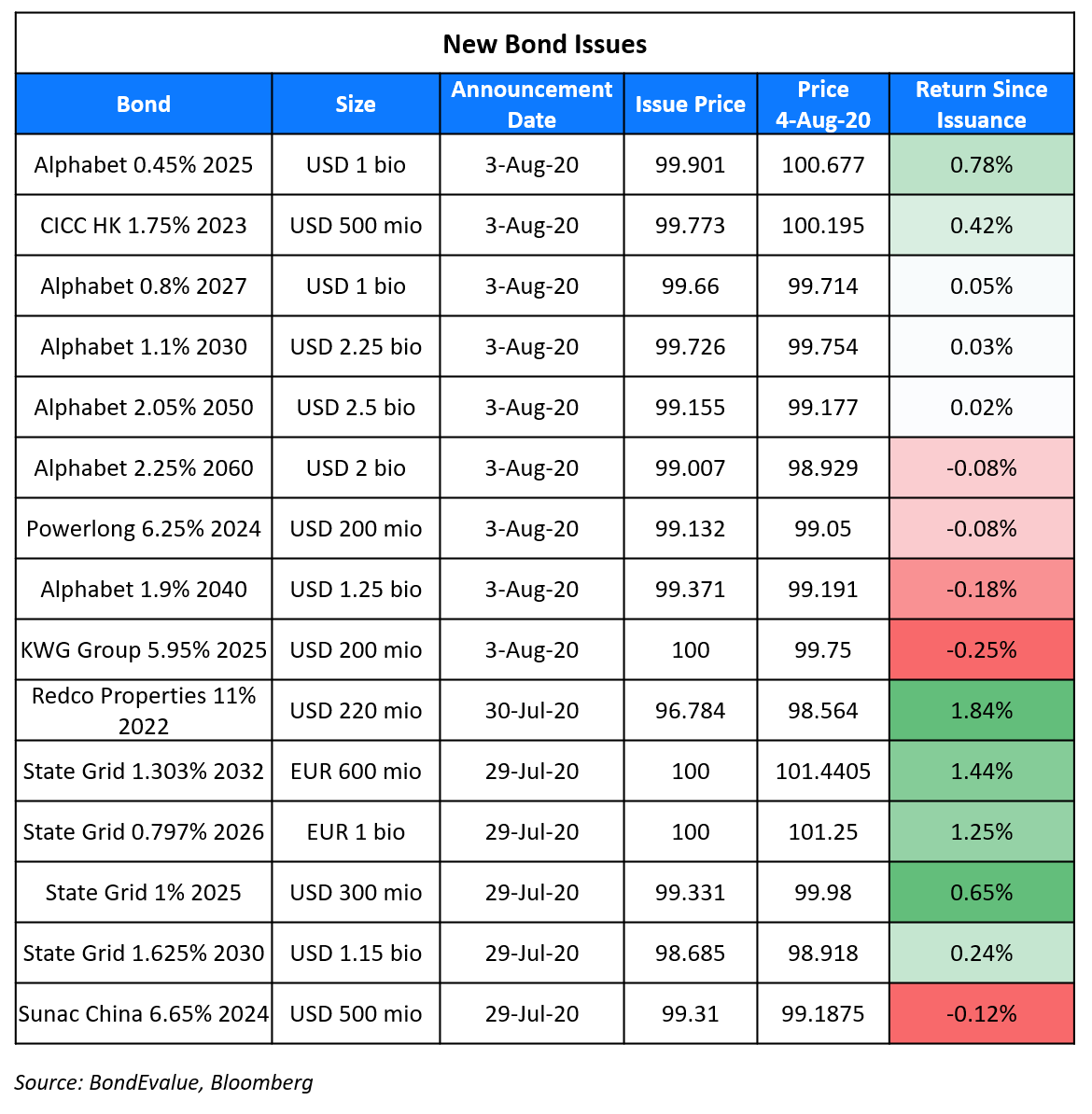 US Treasury Expects to Raise $2.1 Trillion in Debt in Second Half of 2020

On August 3, The US Department of the Treasury announced its current estimates of privately-held net marketable borrowing for the third and fourth quarter of 2020. The estimates are based on an assumption of an additional borrowing of $1tn to address the additional legislation in response to the CoVid-19 outbreak and assume a cash balance of $800bn in September end.

During Q2, the Treasury had raised $2.75tn in privately-held net marketable debt while ending with a cash balance of $1.72tn.

“Clearly there’s an intention to work through cash on hand, and/or there’s an expectation that whatever gap there was that led to lighter than expected financing needs in Q2 will catch up quickly in Q3,”  Tom Simons, a senior money markets economist at Jefferies in New York remarked on the lower financing needs in Q2 compared to the expectations. The US has witnessed a huge rise in Covid-19 cases between the two forecasts, which has adversely affected plans to reopen the economy and has led to the Congress negotiating another round of fiscal stimulus. The Treasuries rates on three-month bills were steady. These stood at 0.0837% on Aug 3 and 0.0661% on Aug 4.

Internet search giant Google raised $10bn worth of bonds via its parent, Alphabet Inc on Monday. The six-tranche deal included $5.75bn worth of bonds earmarked for environmental, social and governance (ESG) purposes, the largest by a corporate according to Bloomberg. The funds raised via the ESG portion of the issuance will be used to support small and medium businesses impacted by the pandemic, Black entrepreneurs and affordable housing. The funds can also be used towards environmental projects such as clean energy and green buildings. Details of the six tranches are as follows:

Chinese internet giant Alibaba ramped up its stake in E-House (China) Enterprise Holdings, one of the country’s largest real estate agencies. E-House announced late last week that it will allocate 118.3mn shares to Alibaba for a consideration of HKD 828.1mn ($107mn). This will increase Alibaba’s stake from 1.97% to ~8.32%. According to the exchange filing, Alibaba will also invest in convertible bonds totaling HKD 1.03bn ($133.1mn) in principal. The 3Y convertibles carry a coupon of 2% and are convertible at HKD 10.37 per share. E-House’s shares currently trade at HKD 10.58. Proceeds from the Alibaba investment are said to be used towards purchasing a controlling 56% stake in Leju.com, an NYSE-listed property listings website. This will once again make Leju.com a subsidiary of E-House. According to Mingtiandi, Alibaba and E-House plan to launch a JV real estate marketing and online transaction platform with E-House taking responsibility for online deals, and the company’s Leju unit driving digital marketing efforts. Leju and E-House chairman Zhou Xin said, “The cooperation between E-House and Alibaba is not only a key milestone in E-House’s and Leju’s development, but also a significant event in China’s real estate service industry. 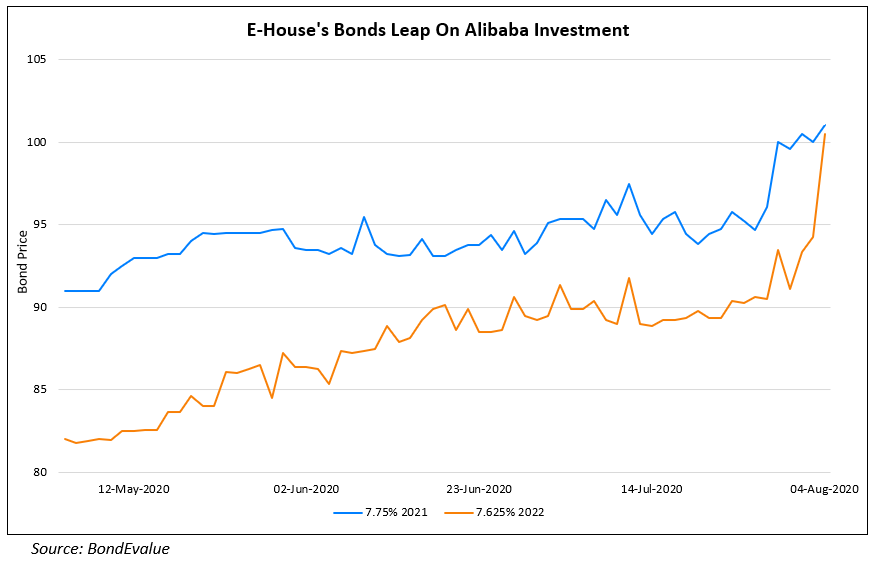 Hong Kong-based distressed company Century Sunshine Group Holdings reached out to holders of its S$101.75mn ($74mn) 7% bonds due 2020, after defaulting on the maturity date of July 3. The company, along with judicial provisional liquidators (JLP) from various Ernst & Young offices said that they planned to seek bondholders’ views related to the restructuring plan. The fertilizer and magnesium producer is considering various options including haircuts on its debt, cost cutting and a third-party equity infusion. The group has total offshore debt of HKD 818.83mn ($87.2mn) and onshore debt of HKD 675.66mn ($105.6mn).

In related news, UAE-based Utico has extended its revised cash and stock offer for troubled Singapore-based water treatment company Hyflux. As covered by us last week, Utico had made a binding offer expiring on July 31. This offer has now been extended to August 30. Utico said that the offer is “binding” and will remain valid even if judicial management is approved by the courts for Hyflux.

Ecuador has struck a deal with the bondholders in favor of debt restructuring, which will stabilize its finances in the near future. The vote in favor of the restructuring plan included an ‘Aye’ from bondholders of 98% of the bonds under consideration. This marks an important milestone for the South American nation as it will allow a partial debt relief of $10bn over the next four years and another $6bn between 2025 and 2030. This nation will gain more than $1.5bn at the cost of bondholders, who could lose up to 9% on capital repayments. The Moreno government will issue three sets of bonds maturing in 2030, 2035 and 2040 in exchange for the notes maturing between 2022 and 2030. The terms allow the interest payments to resume next year and the first principal payment to be made only in January 2026. The Ecuadorian economy has been under stress on the back of the pandemic and the drop in oil prices as it sits on a debt pile of $58.4bn. The government had approached the creditors with a restructuring plan on July 6 when most creditors including BlackRock, Ashmore and AllianceBernstein accepted the offer, while a few including T Rowe Price and Amundi opposed the proposal as they wanted stronger equitable treatment to all parties. Connecticut based Contrarian Capital Management and Boston based GMO even went to court last week accusing the Ecuador government of a coercive plan designed to deceive and mislead the bondholders. The case was rejected by a New York judge and cleared the way for the voting for the restructuring plan. The move was welcomed by Kristalina Georgieva, who is the managing director of IMF. She remarked that the deal was a “momentous milestone” and added “[We] look forward to deepening our dialogue on a new program” as Ecuador looks to secure a new lending agreement with the IMF. President Lenin Moreno of Ecuador tweeted “Great news for Ecuador!” and added ” With this, we free up resources for social protection and economic recovery,”.

Triggers are an important feature of contingent convertible or CoCo bonds and define when the loss absorption mechanism is activated. Triggers can either be mechanical or discretionary. Mechanical triggers are numerically defined and most commonly refer to the bank’s capital ratio level. Discretionary triggers, also known as point of non-viability (PONV) triggers are based on supervisors’ judgement of the bank’s solvency position. On occurrence of a trigger event, a CoCo’s loss absorption mechanism kicks in, which may include a conversion to equity or a principal write-down, both of which boost the bank’s capital position.

With the Credit Suisse CoCo bond launched this morning, the trigger is a mechanical one defined as the group’s common equity tier 1 (CET1) ratio of 7%. If the group’s CET1 falls below 7%, the bonds will convert to equity.

On the urgency of US fiscal aid

“It’s very important that something be done. If we go very long without somehow addressing the reduction and evaporation of that support, I think it’s going to show up in lower aggregate demand, and that would be very costly for the economy.”

“Unless inflation starts heading up to like 2.5%, I’m not going to really see a need for the funds rate to be increasing as long as we can still drive unemployment lower, that we can get more people into the workforce, we can recover from some of what we’ve just sort of experienced, and get everybody back on their feet,” Evans said. “So, I think that’s the kind of forward guidance I know I would be arguing for.”

“The increased incomes, while it may have made it harder for certain individual businesses to hire, it’s helped create jobs because it’s helped bolster consumer spending, so the net effect still has probably been positive for the economy and for employment,” Kaplan told Michael McKee in a Bloomberg Television interview.

On the prospect of US yield curve falling below 1%

“I think the downward pressure on yields will continue for the foreseeable future,” Maroutsos, who said that given where global yields trade outside the United States, “it’s only a matter of time before the entire U.S. curve trades below 1%.” Maroutsos said it was a “sign that investors are reaching for any yield they can get regardless of low it is.”

On Alphabet’s largest bond issue at lowest ever price

“We’re at a stage where these extremely high-quality issuers – of which Alphabet is one – are going to price very very tight. That’s because there are a lot of buyers who need short-term, don’t-need-to-think-about-it money. You’re getting two times the yield on the five-year Treasury,” said Graff.

“There is a very narrow set of companies that were already super high quality, that are not impacted by this recession we’re going through right now. And Google is one of them,” said Graff.

On EU as a new player in the bond market

“By issuing debt in the market on this scale, the EU also provides the ECB, as well as investors, with a new liquid euro-denominated benchmark instrument benefiting the euro’s status as a reserve currency,” said S&P Global Ratings.

“The EU is rated triple A by two of the big rating agencies. I would think the EC has been in contact with the rating agencies to establish a system to satisfy the agencies in order to keep a very high rating. There are not a huge amount of safe assets around in Europe and the true safe asset is the German bund, but it is hard to see the EU defaulting. There is a decent chance these bonds will be rolled over in the long-term, too,” he said

The EU’s bond issuance scheme would aid a lessening in pressure of the doom loop, he said. “It’s a step in the right direction towards reducing the doom cycle, it provides a way for banks to diversify their portfolio, to provide them with a more balanced portfolio since they can invest in an asset class not linked to one country,” he said. 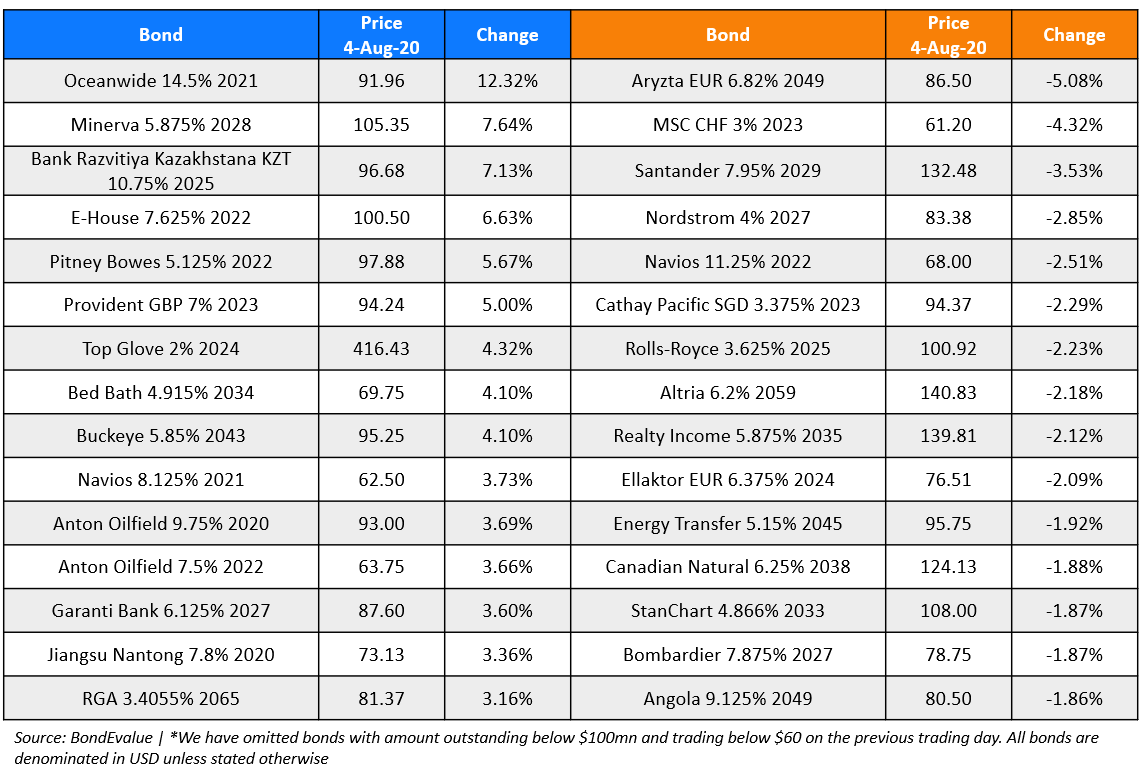