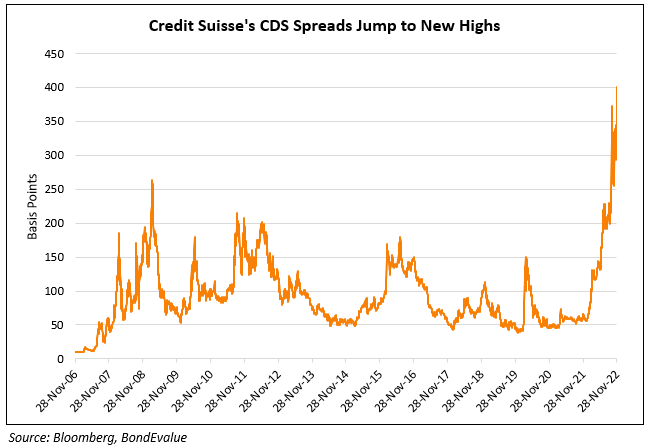 Troubled Swiss lender Credit Suisse’s CDS spreads jumped by over 57bp to cross the 400bp mark yesterday and its dollar perps also dropped by over 2 points. The move comes at a time when the bank is issuing new shares to shore up its capital as per its strategic plan. Credit Suisse recently warned of another quarter of losses, expecting a $1.6bn Q4 loss on account of large withdrawals by wealthy clients. Vontobel’s analysts said that the bank’s liquidity coverage ratio (LCR) had fallen “massively” towards a legal minimum of 100% with its liquidity breaching some regulatory limits, thereby renewing concerns. In a latest update, the US Federal Reserve said that it planned to pursue an investigation of Credit Suisse over collapsed investment company Archegos Capital. This could lead to Credit Suisse facing additional fines.

Credit Suisse warned that it expects to make a CHF 1.5bn ($1.6bn) loss in 4Q 2022. The Swiss bank said that wealthy clients have made hefty withdrawals which has lead to a big drop in liquidity, breaching some regulatory limits. Credit Suisse said there had been an outflow of 6% of AUM at the end of Q3. While the lender did not mention the quantum of withdrawals specifically, analysts at Vontobel estimate the scale of withdrawals to be around CHF 84bn ($89bn). Thus as the bank had to use its liquidity buffers to address its financing requirements, it breached certain minimum regulatory requirements as per Reuters. Vontobel’s Andreas Venditti said that Credit Suisse’s liquidity coverage ratio (LCR) had fallen “massively” towards a legal minimum of 100%. The bank said that outflows in wealth management had reduced “substantially” from a high in the first two weeks of October but had yet to reverse.

Credit Suisse unveiled further details regarding its planned CHF 4bn ($4bn) capital raise. The bank had already mentioned that Saudi National Bank would invest SAR 5.7bn ($1.52bn) and become its second shareholder, owning 9.9%. Besides that, the Swiss bank is issuing new shares to new and existing shareholders. It said that new investors have committed to buying 462mn new shares at a purchase price of CHF 3.82/share ($3.83), to raise CHF 1.76bn ($1.76bn) Swiss francs. Existing investors will be offered 889mn shares at CHF 2.52/share ($2.52), with subscription rights corresponding to the size of their present stake.  Both the new share issuances have to be approved at an ESG due November 23, where the final terms will be revealed. If rejected, Credit Suisse said it would issue 1.8bn new shares at CHF 2.27/per share ($2.27), which would still enable it to raise the required amount.

Credit Suisse Group reported its much awaited Q3 results with a massive CHF 4.03bn ($4.08bn) net loss as compared to a $434mn profit during the same period last year. This was also higher than its prior quarter where it made a CHF 1.59bn ($1.61bn) loss. The bank reported net revenues of of CHF 3.8bn ($3.85bn), down 30% YoY. Its Wealth Management unit’s pre-tax income stood at CHF 78mn ($79mn), down 80% YoY due to reduced transaction revenues and lower volumes. The unit witnessed net asset outflows of CHF 6.4bn ($6.47bn) during the quarter mainly driven by “client deleveraging and proactive de-risking”. Its Investment Banking unit posted a significant pre-tax loss of $640mn, down from a pre-tax profit of $662mn in 3Q 2021, mainly hit by a 90% drop in its capital markets revenues. The bank’s CET1 ratio stood at 12.6%, down 220bp YoY and 90bp QoQ. The depletion in its capital ratio was due to the impact of the CHF 3.7bn ($3.75bn) impairment of deferred tax assets related to its strategic review, RWA inflation and the its pre-tax losses.

Given its overall group restructuring efforts, the bank said it would carve out an independent unit called CS First Boston to rebrand its capital markets and advisory business. It also confirmed that its securitized products group (SPG) business will be sold to a consortium made up of Apollo Global Management and PIMCO. Credit Suisse further announced its intention to raise around CHF 4bn ($4.05bn) of capital subject to approval at its Extraordinary General Meeting (EGM) on 23 November 2022. If successful, it should lead to an increase in its CET1 ratio to ~14.0%, it said. Of this amount, Saudi National Bank (SNB) will invest SAR 5.7bn ($1.52bn) and become its second shareholder, owning 9.9%, just behind US investment group Harris Associates that holds a 10.1% stake. Besides, a rights issue for existing shareholders will run through November, it said.

Credit Suisse is said to be in talks with RBC and Morgan Stanley on a potential capital raise, in an effort to raise funds for its restructuring, according to sources. This comes alongside its efforts to sell some of its businesses like US asset management and investment banking arms. The capital raise is being explored under what is called “Project Ghana” and sources note that the news could be out on October 27 when the bank would make a formal announcement alongside its earnings. Analysts estimate that the Swiss bank may raise $4-8bn, where at least $2bn would be to cover restructuring and any operating losses over the next couple of years. Analysts at investment banking company KBW say that Credit Suisse has a ” capital ‘hole’ of 6 billion francs” that needs to be filled for restructuring, regulatory purposes and to support growth where asset sales alone are unlikely to be sufficient to fill this gap. The troubled bank was said to have approached Middle Eastern sovereign funds too for capital purposes.

Credit Suisse’s CDS spreads rose by 15bp to 335bp with some of its dollar bonds dropping by over 1 point. This is after reports that the Swiss bank may be the subject of a US tax investigation where it might be complicit in helping US clients hide sizeable assets from authorities. Eight years ago, CS had to pay a settlement amount of $2.6bn on account of tax evasions. Reuters notes that the US DOJ is investigating whether CS helped US account holders, in particular, those with South American passports, who may not have told the IRS about hundreds of millions of dollars in assets.

Credit Suisse has offered to buyback up to ~$980mn of eight of its EUR or GBP-denominated bonds and another $2bn of twelve of its dollar bonds up to $2bn, in an attempt to soothe market nerves.  The offers will expire on November 3 and November 10, 2022. Bloomberg notes that the announcement is a signal of confidence that the bank has enough liquidity. They added that pay less than 96 cents on the euro to buy a €750mn FRN. Following the announcement, its CDS spreads have fallen by 39bp to 306bp. The move by CS echoes a similar buyback of $5.4bn by Deutsche Bank in 2016 as a similar crisis in confidence about the German lender emerged then. Alicia Garcia Herrero, chief Asia Pacific economist at Natixis said that CS’s buyback is a “way of muddling through the current situation as they hope to bring down its CDS spreads before they tap the bond market again to raise capital”.

Credit Suisse’s EUR 5Y CDS spread spiked again, by 68bp yesterday to 372bp with its bonds resuming losses after a partial short-lived recovery yesterday. The chart below shows CS’s current CDS curve and the curve a week ago, highlighting the current curve inversion where short-term spreads are higher than long-term spreads. This implies a higher annualized cost of protecting against a default in the short-term vs. the longer-term, implying a higher degree of uncertainty over its creditworthiness in the near-term.  Its dollar bonds were down 1.5-3.7 points with its 9.75% Perp down the most, by 3.7 points to 89.72, yielding 12.71%.

Dollar bonds of Credit Suisse recovered some of its losses yesterday after Monday's panic sell-off with some AT1s up over 6%. Its EUR 5Y CDS spread also tightened by 15bp to levels of 304bp.

Monday saw a panic selloff in Credit Suisse's (CS) stock and bonds following an internal memo sent by the CEO to its employees reassuring them of the bank's strong capital position and liquidity. It was a sea of red for its bonds with its Additional Tier 1 (AT1) perps leading the losses, given its loss absorption feature. In the table below, we have listed all the CS AT1s in our universe with the price moves seen over the past month.

There was a spike in its CDS spreads as well, with its 5Y EUR CDS up ~70bp to 320bp. In fact, market participants saw a CDS curve inversion for CS, with 1Y CDS spreads higher at 550bp. There was also a ripple effect on UBS' CDS spreads, with its 5Y CDS spreads up 8bp to 115bp. While the CS stock fell ~8.5% on Monday morning, it recovered all of the day's losses to close at 3.94%.

Concerns around Credit Suisse (CS) grew over the weekend after CEO Ulrich Koerner sent another memo to its employees in a bid to reassure them. Koerner requested staff to not relate daily stock price performance (CS stock is trading near all time lows) to the Swiss bank's “strong capital base and liquidity position”. He conceded that there is a fair bit of uncertainty and speculation around the future of the bank ahead of the results of its strategic review on 27 October, and vouched to send regular updates to the staff till that date. He further requested employees to "remain disciplined and close to clients despite all the media attention the bank is receiving", CNBC reported. This comes after reports last week of the bank planning another capital raise and splitting up its investment banking division

The heightened concerns led to a 19bp spike in its 5Y USD CDS spreads from 266bp on 28 September to 285bp currently, the highest level ever as seen in the chart above. 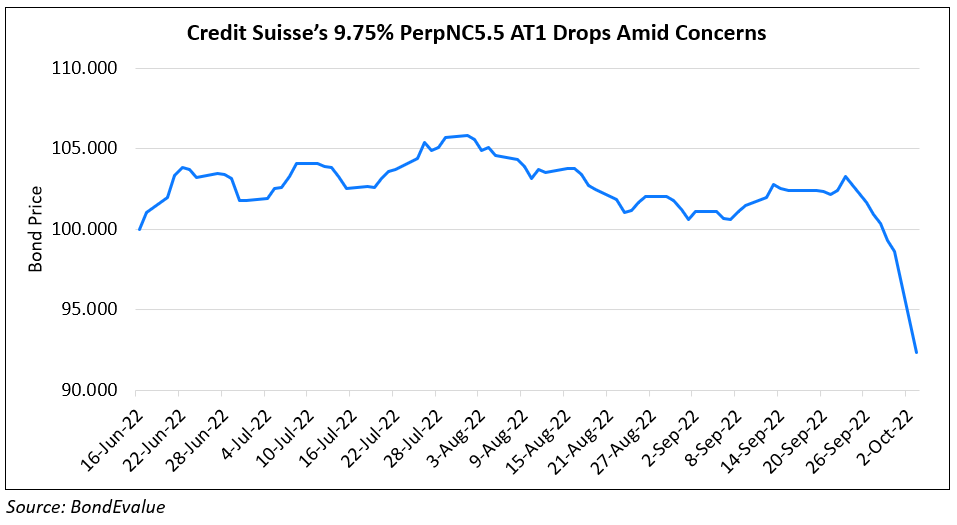 Track the latest bond prices of Credit Suisse bonds by clicking on the bonds below.

Credit Suisse's 5Y CDS spreads are now at its highest levels since the Global Financial Crisis in 2008. The Swiss-based bank has been facing a lot of flak ever since the collapse of its $10bn supply chain finance funds related to Greensill and $4.7bn writedown tied to the Archegos Capital fiasco in 2021. Further, Credit Suisse has also been under the pump due to money laundering issues and its planned workforce downsizing. It has focused on scaling back its investment bank and reducing more than $1bn in costs. The bank has now reported three straight quarterly losses and due to a drop in its capital, the company has sought to rebuild its buffers. However, this has come at a cost - in June 2022, it raised $1.65bn via a PerpNC5 AT1 issuance at a yield of 9.75%. The bonds were priced at a new issue premium of 81.3bp over its comparable 5.25% Perp callable from February to August 2027 that traded at a yield to worst of 8.937% at that time. Most recently, it announced the sale of its Singapore trust business, among others, and a winding down of its legal entities and "residual businesses" in the coming years. The increased credit risk in the lender is now being seen via rating downgrades and the spike in its CDS spreads (as seen in the chart below). Credit Suisse is currently rated Baa2/BBB/BBB by Moody's/S&P/Fitch vs. Baa1/BBB+/A- prior to 2021.

Its dollar bonds have dropped so far this year. For example, its USD 7.25% Perps are down 27% YTD.