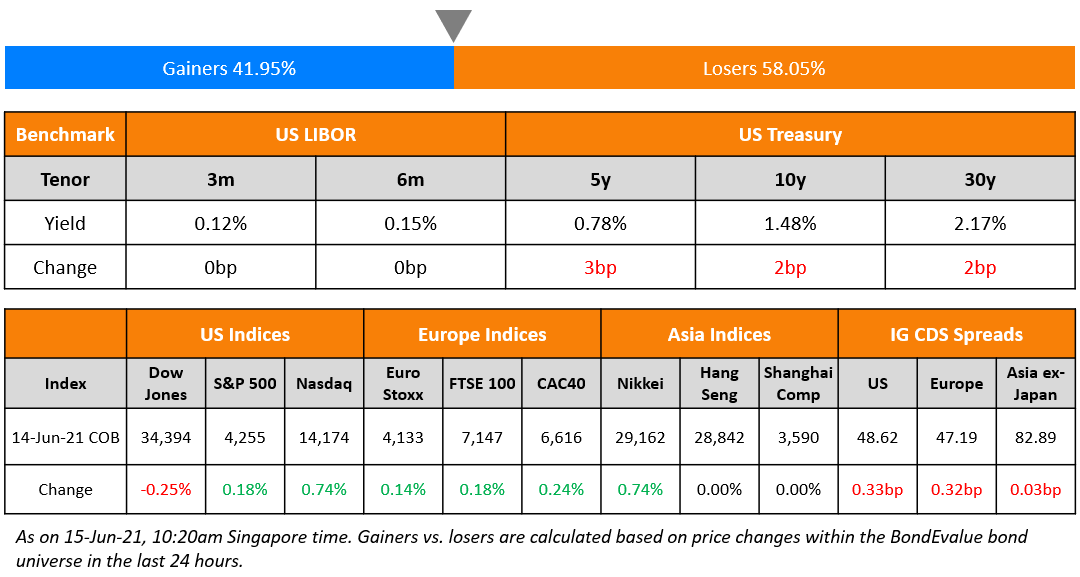 S&P closed higher by 0.2% while Nasdaq moved up 0.7% to continue making new highs. Tech once again traded higher, up 1% while Materials and Financials (down 1.3% and 1%) weighed down on the indices. Apple was up 2.5%, Facebook 1.7%, Amazon 1.1% and Alphabet and Microsoft were up 0.8% each. A Survey of Consumer Expectations for May by the Fed revealed that the inflation rate is expected to be 4% one year from now and 3.6% three years from now. All eyes are now set on the FOMC meeting tomorrow. US 10Y Treasury yields climbed 2bp from three month lows to 1.48%. European markets were largely flat with DAX down 0.1% and CAC and FTSE up 0.2%. Spreads widened across – US IG and HY CDS widened 0.33bp and 1.22bp respectively. US HY bond yields fell to a new record low of 3.84% as as tracked on the Bloomberg Barclays HY index. Bloomberg reports that the backdrop of an earnings recovery and strong returns of energy companies have helped demand for higher yielding assets. 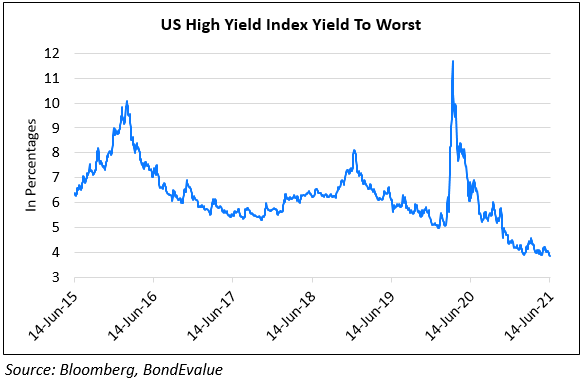 EU main and crossover CDS also widened 0.32bp and 1.09bp respectively. In the Gulf, the Saudi TASI extended its gains by another 0.2% while UAE’s ADX again ended flat. In Latam, Brazil’s Bovespa was up 0.6%. Asian markets have opened mixed with China and HK down ~1% and others marginally higher. Asia ex-Japan CDS spreads were flat. 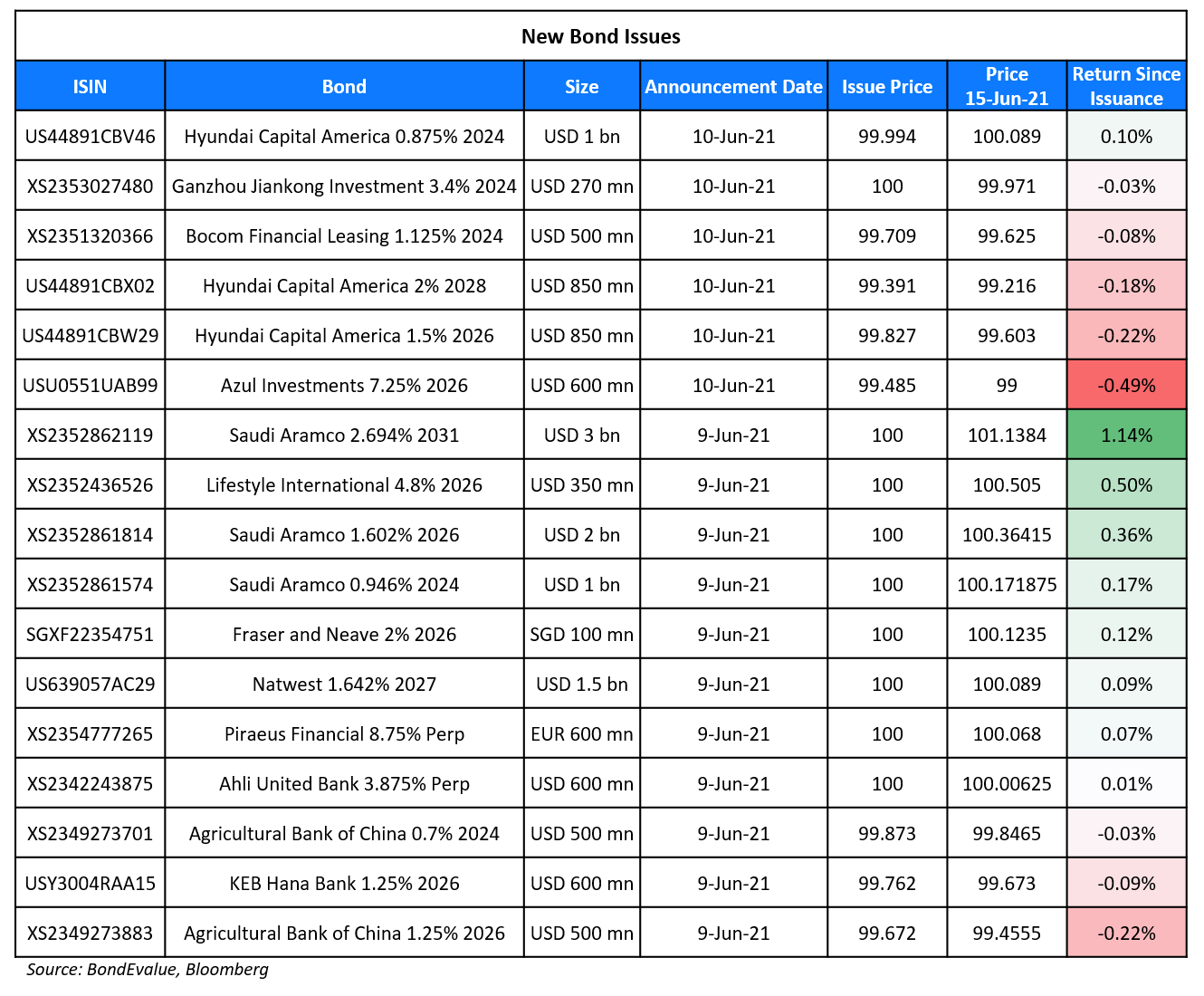 A Regulation S or Reg S bond is one that is issued in the international bond market and is usually cleared through Euroclear and Clearstream. These bonds cannot be sold in the US, except to qualified institutional buyers (QIBs) under the SEC 144A Rule. The 144A Rule, issued in 1990, modified a two-year holding period rule on privately placed securities by permitting (Qualified Institutional Buyer) QIBs to trade in these securities among themselves. Thus, a 144A bond, with a unique identifier, is privately placed to US based QIBs and usually clears through DTCC.

On the notion of “too big to fail” no longer applying in China – according to Goldman Sachs analysts
“Even for large corporates or for state-related entities, policy makers are much less willing to extend support.” “Policy makers are now less likely to conduct full bailouts than compared with the past.”
On EU’s $1 trillion debt plan that aims to ‘transform’ Europe

“We’re taking a look and will probably buy,” said Taylor.
Rainer Guntermann, Commerzbank strategists and his team
“A decent new issue premium on top of cheapened levels versus swaps and French bonds of late should ensure that NGEU gets off to a successful start,” said in a note Monday. The transaction size may be large “given the EU’s heavy workload until year-end,” they said.
On foreign investors buying Asian bonds in May as US yields drop
Duncan Tan, strategist at DBS Bank
“Because of South Korea’s strong growth recovery and shorter timeline to policy lift-off, 10Y Korean bond yields have been trading at historically wide spreads to U.S. Treasuries and other peer EM low-yielders.” “Even on an FX-hedged basis, Korean bonds also continue to offer consistently high pick-ups over U.S. Treasuries.”
Jennifer Kusuma, Asia rates strategist at ANZ
“For the region, the improved performance of Chinese asset markets may also develop into a fresh driver of strength. We expect better buying interest for LCY (local currency) bonds near term,” she said.
On dovish ECB keeping Italian bond yields near multi-week lows
Antoine Bouvet, ING senior rates strategist
“Lagarde’s comments (this and last week) support stability in rates.” “This should in theory attract more demand into carry trades (in particular high-yielding bonds) but I think this is largely priced in,” he said.
Lidia Treiber, director of research at WisdomTree Asset Management
“The key point is that new EU bonds will provide investors with a liquid alternative.” “This moment sets a precedent as an additional tool that the EU and the ECB has.”
On Greek 5-year bond yield turning negative for first time
Richard McGuire, rates strategist at Rabobank
“We’re seeing this rally because the ECB has reassured the market it won’t imminently remove the punchbowl.” “The ECB has bought time,” he said. “But as we edge towards September there’s a likelihood we refocus attention on the winding down of stimulus.”
Nic Hoogewijs, portfolio manager at Lombard Odier Investment Managers
“In the near term the ECB is very, very clear.” “They do not want to see a tightening of financial conditions, and funding costs for sovereigns really is key.” “You can’t really position on sovereign spreads based on economic fundamentals. That’s not what drives pricing,” he said. 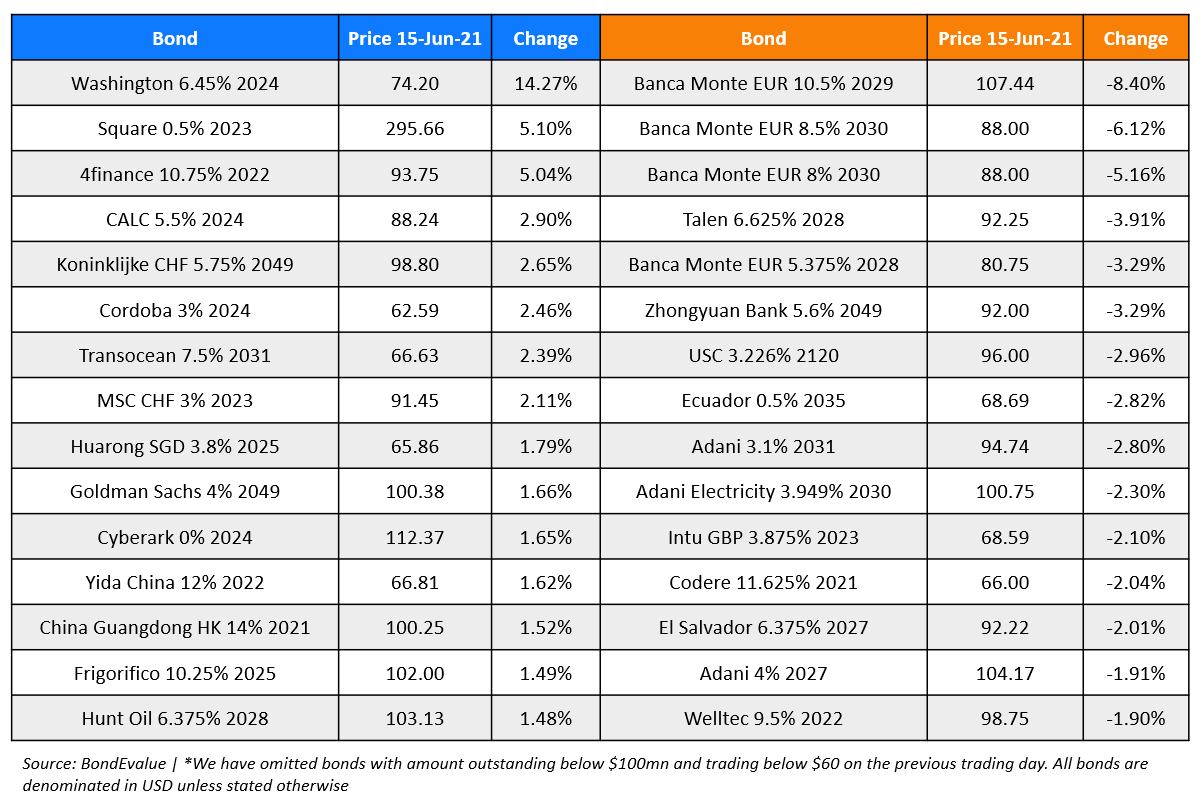