Dimon & Greenspan Both Strike Cautionary Notes on the Bond Market 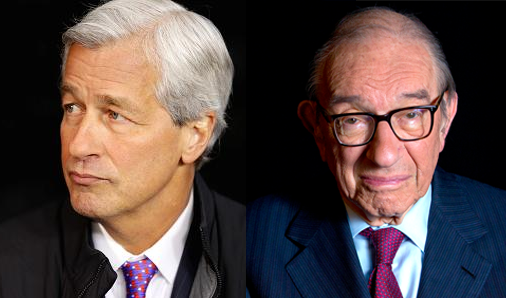 Notably, Greenspan told Bloomberg News in a strikingly memorable manner “we are experiencing a bubble … in bond prices”, where “real long-term interest rates are much too low and therefore unsustainable”. As contentious as it might sound, we have to be dutifully wary of this possibility. Just less than a decade ago, the implosion of a housing bubble exposed a serious weakness in the global financial system, which we are only starting to recover from.

In a similar light, Dimon steps up to also present a circumspect approach to the bond market. While he won’t “call it a bubble”, Dimon says, “I do think that bond prices are high[er than they should be]” and “[he] wouldn’t personally be buying 10-year sovereign debt anywhere around the world.”

We have to understand Dimon’s words carefully and in full context; this statement comes as particularly striking but the reasoning behind it is not totally unsound. His view is that the Fed “is doing the right thing”, in raising rates and announcing plans to reverse its quantitative easing. But, and its a big ‘but’, there is a small chance it might not go well. And if rates were to rise rapidly, purchasing 10-year sovereign debt today at levels close to all time lows would not make viable sense. Rightly said, the future is unpredictable.

Charting the historical quarterly U.S. 10-year Treasurys over the past 40 years shows that it is close to 40-year lows. According to Dimon, the likely outcome is that the bond market will be fine, and the Fed’s actions will not be disruptive, especially in the face of a growing and expansionary economy. Still, with yields close to zero for such a long period, a large segment of the market still believes that it would continue and not spike anytime soon. The trajectory of the bond market is anyone’s call to make.