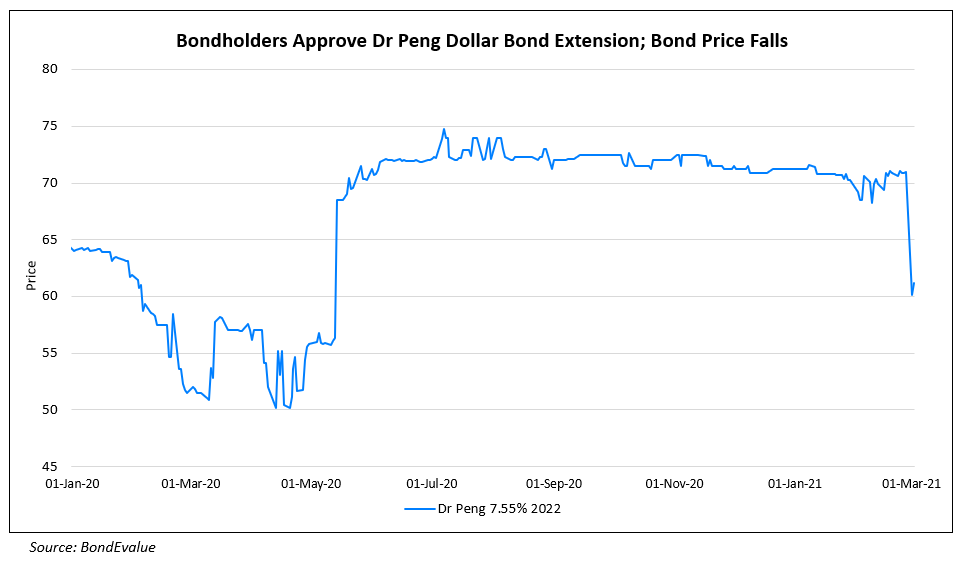 China’s Dr. Peng Telecom & Media Group announced on Monday that it has received approval from bondholders of its $257.6mn 7.55% bonds due in December this year to extend the maturity. Holders representing 87.3% of the total amount outstanding voted at the meeting, of which 99.85% agreed to the proposal, which includes a default waiver and a maturity extension from December 1, 2021 to December 1, 2022. As per the terms of the extension, Dr. Peng will redeem 5% in principal on June 1, 2021 and 20% on December 1, 2021. As per IFR, the company will “also add security over an inter-company loan made to its subsidiary, Pacific Light Data Communications, which owns four of the six pairs of ultra high-capacity optical fibres in the Pacific Light Cable Network, an undersea fibre optic cable project that aims to connect Hong Kong and Los Angeles.” Bondholders that gave consent will receive a consent fee of $15 for every $1,000 in principal. This is the second extension of its dollar bonds, which originally had a maturity date of June 1, 2020. The first extension was by 18 months from the original maturity in exchange for a coupon increase to 7.55% from 5.05% and partial principal repayments on June 1 and October 1 last year.