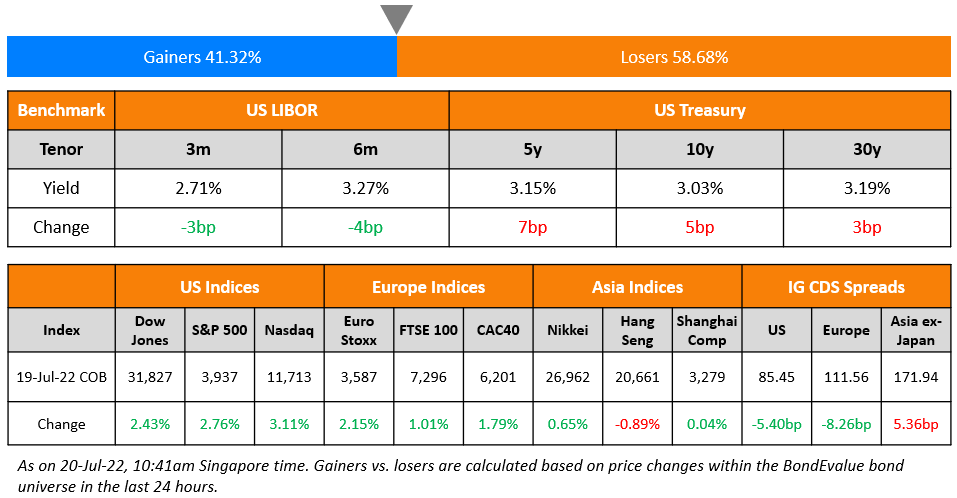 US equity markets ended with strong gains on Tuesday with the S&P and Nasdaq up 2.8% and 3.1% respectively as risk aversion receded. Sectoral gains were led by Communication Services and Industrials up 3.6% each. US 10Y Treasury yields were 5bp up at 3.03%. European markets were also higher with the DAX, CAC and FTSE up 2.7%, 1.8% and 1% respectively. Brazil’s Bovespa inched higher by 1.4%. In the Middle East, UAE’s ADX and Saudi TASI were up 0.5% and 1.8%. Following the US, Asian markets have also opened stronger – Shanghai, HSI, Nikkei and STI were up 0.7%, 1.9%, 2.4% and 1.3% respectively. CDS markets also saw relief from the improvement in risk sentiment. US IG CDS spreads narrowed 5.4bp and US HY spreads were tighter by 31.5bp. EU Main CDS spreads were 8.2bp tighter and Crossover spreads were tighter by 39.5bp. Asia ex-Japan IG CDS spreads widened 5.4bp. 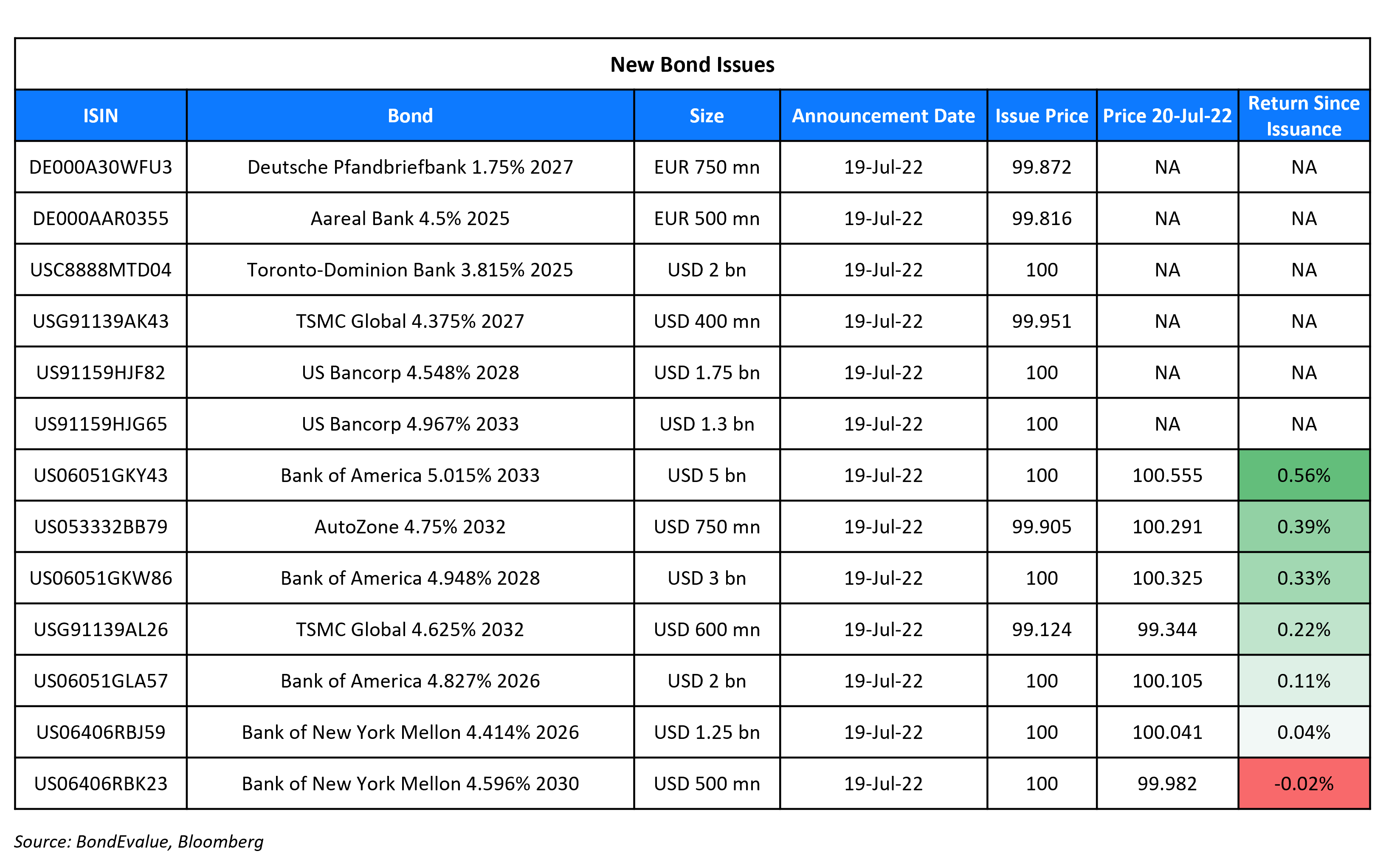 Bank of America raised a solid $10bn via a 3-tranche deal. It raised

The bonds have expected ratings of A2/A-/AA-. Proceeds will be used for general corporate purposes.

BNY Mellon raised $1.75bn via a 2-tranche deal. It raised

The bonds have expected ratings of A1/A/AA-. Proceeds will be used for general corporate purposes.

TSMC Global raised $1bn via a dual-trancher. It raised

The bonds have expected ratings of Aa3/AA– (Moody’s/S&P). Proceeds will be used for general corporate purposes.

TD Bank raised $2bn via a 3Y covered bond (Term of the Day, explained below) at a yield of 3.815%, just 1bp inside the initial guidance of MS+80bp area. The bonds have expected ratings of Aaa.

“This means that a 50 basis-point increase will be among the choices on the table when we next meet. 50 basis points is not locked in, and anyone who predicts that is doing so based on their own view.”

“Debt relief is of major importance for the world because the interest rates are going up. The debt was already too burdensome and now the countries are experiencing currency depreciation, which causes inflation… There’s not really a process to reduce that debt. We saw that at the G-20 just completed last week — no forward progress… “I’m hopeful that Zambia may be able to get debt relief in the next few days”

Alfred Wu, an associate professor at the NUS

“Chinese homebuyers usually pool the whole family’s resources to buy a home. It is a life-and-death matter for them if their homes become negative assets.”

“It’s the first time we’ve seen this type of mortgage boycott in China and it’s clearly caught Beijing’s eye. It’s crucial that Xi preserves stability before the 20th party congress… Not directly confronting the national regime has allowed these protests to continue up to this point”

“Markets are clearly pricing in a high probability of the autarky scenario in which El Salvador defaults, but there is no restructuring… For a restructuring to work, it nearly always needs the IMF involved and or there to be a clear push for reform by the government. Given this may not be the set-up in a potential restructuring, it could easily end up being a protracted negotiation.” 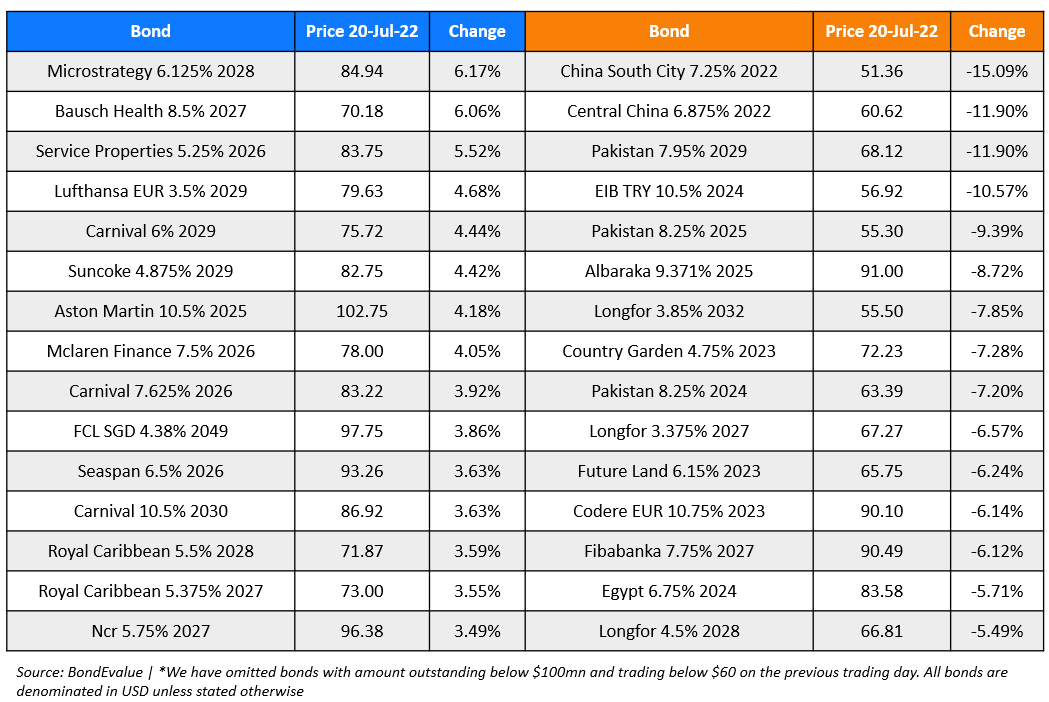