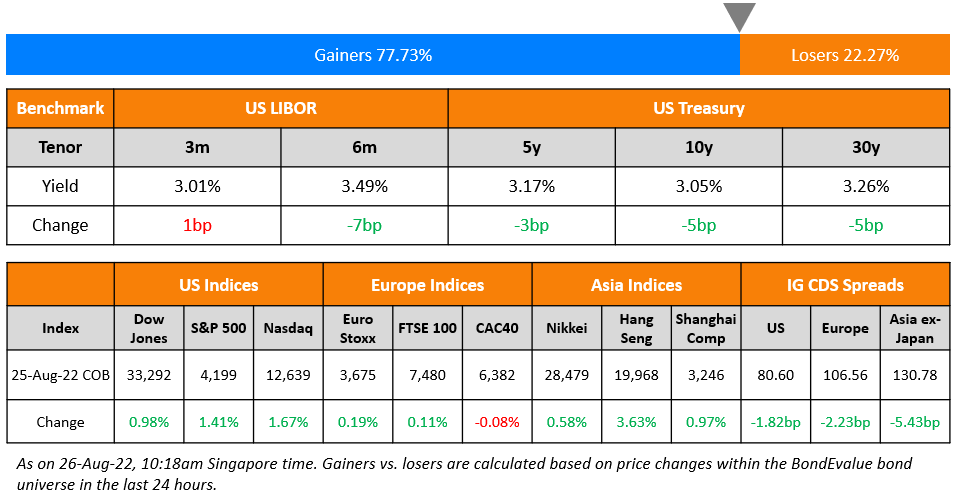 US equity markets continued to extend their gains on Thursday with the S&P and Nasdaq closing higher by 1.4% and 1.7% respectively. Sectoral gains were led by Materials, up 2.3% and Communication Services rising 2%. US 10Y Treasury yields were 5bp lower at 3.05%, ahead of Powell’s speech on Friday at Jackson Hole. European markets were mixed – DAX and FTSE rose 0.4% and 0.1% respectively while CAC ended 0.1% lower. Brazil’s Bovespa was up 0.6%. In the Middle East, UAE’s ADX and Saudi TASI ended up 0.2% and 1.2% respectively. Asian markets have opened higher today – Shanghai, HSI, Nikkei and STI were up 0.2%, 0.6%, 0.9% and 0.4% respectively. US IG CDS spreads tightened 1.8bp and US HY spreads were tighter by 12.4bp. EU Main CDS spreads were 2.2bp narrower and Crossover spreads tightened by 13.5bp. Asia ex-Japan IG CDS spreads tightened 5.4bp. 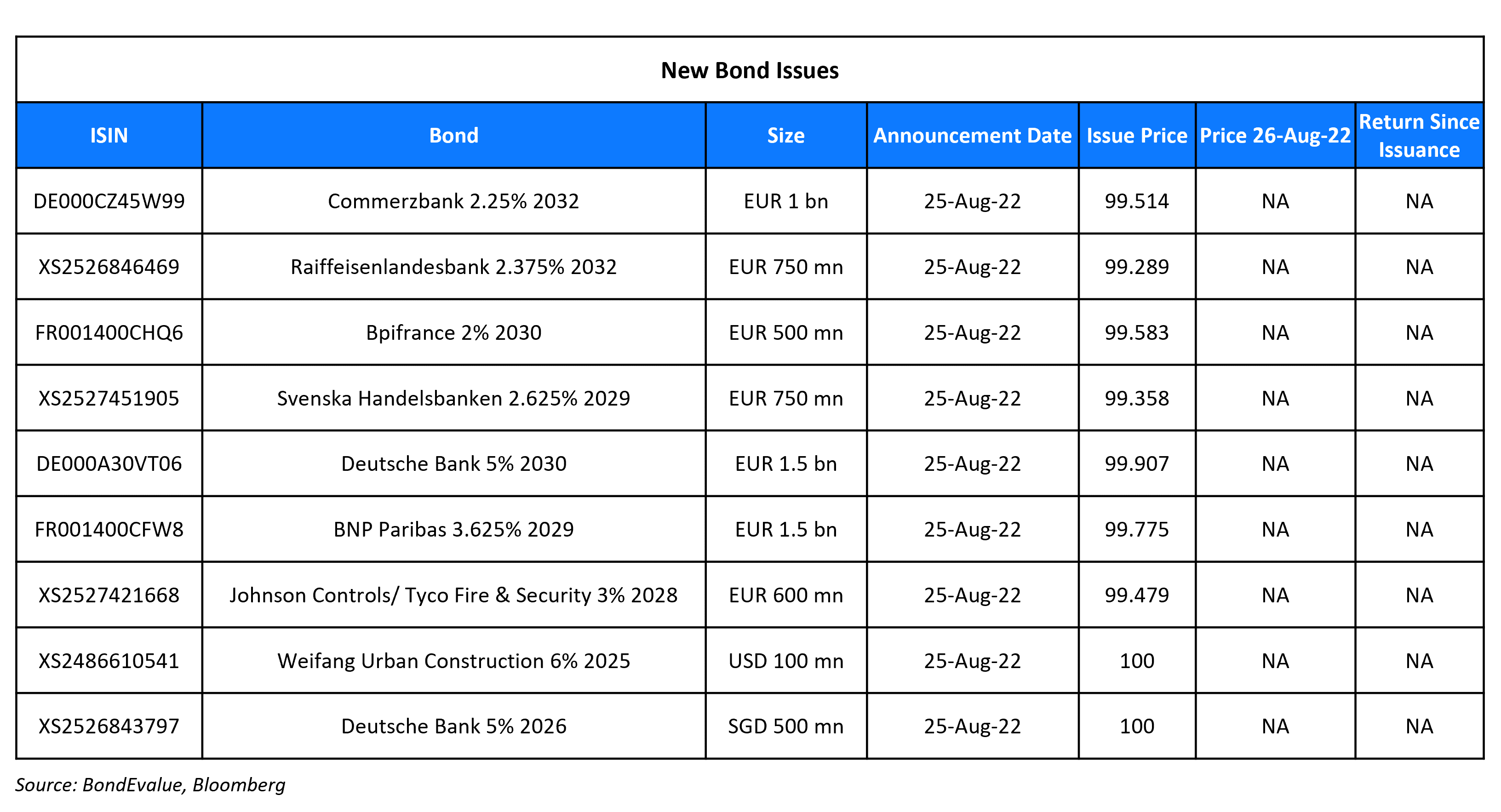 Deutsche Bank raised S$500mn via a 4NC3 bond at a yield of 5%, 30bp inside initial guidance of 5.3% area. The senior bonds have expected ratings of Baa2/BBB-/BBB+. Proceeds will be used for general corporate purposes. The bonds have a call date of 5 September 2025. If not called by then, the coupon will reset to 1Y SORA OIS plus a spread of 212.3bp. The bonds also have a 75% clean-up call (Term of the Day, explained below) feature, subject to prior regulatory approval.

Deutsche Bank raised €1.5bn via a 8NC7 bond at a yield of 5.016%, 20bp inside initial guidance of MS+315bp area. The senior non-preferred bonds have expected ratings of Baa2/BBB-/BBB+, and received orders over €4.5bn, 3x issue size. If not redeemed by the call date of 5 September 2029, the coupon will reset to the 3m EURIBOR plus a spread of 295bp.

Term of the Day: Clean-up Call

A clean-up call refers to a call provision, whereby once a stated percentage of a security is retired, the issuer is obliged to call the remainder of the tranche. While clean-up calls are generally more commonly observed in mortgage-backed securities (MBS), they may also be present as a feature in some bonds. This is different from a normal call option in a bond where the issuer has an option to redeem their bond fully during the specified call date./period.

For example, Deutsche Bank today priced a S$500mn 4NC3 bond at a yield of 5% with a 75% clean-up call. This indicates that once 75% of the bond is called back, the issuer is obligated to immediately redeem the remaining 25%.

On Fed Can’t Blink After Being ‘Asleep at the Wheel,’ – El-Erian, chief economic adviser at Allianz SE

“The Fed is so late that it’s looking at two challenges: putting the inflation genie back into the bottle and it’s looking at not creating too much damage to economic growth and inequality… It’s going to take some time because the Fed has been asleep at the wheel… has to focus on inflation and has to do it in a more committed fashion than it has done it so far.”

“There are glimmers of hope on inflation. I just emphasize glimmer — our job is no way done. So we can take that as a positive, but we need to keep acting to raise rates to get inflation under control”

“At this point, I’d toss a coin between the two [50 or 75 basis-point increase at the September meeting]”

On Wall Street Wondering If 20-Year Treasury Bond Is Doomed

“Will an end-user base ever develop for the 20-year is an outstanding question. There must be a valuation level where Treasury would say ‘why are the taxpayers paying more than they need to?”

“It’s not just a question of being patient to see if it pans out. They want to assure the market that when they introduce the next new product they’re not going to be scared off by a rocky start.”

“In aggregate, the asset markets will decline from 20% to 25%… The market is pricing a decline in inflation to occur in a relatively stable economy”, but isn’t factoring in the impact of higher interested rates and the Federal Reserve’s QT… “We’re still 25% to 30% above the normal relationship between cash flows and asset prices.” 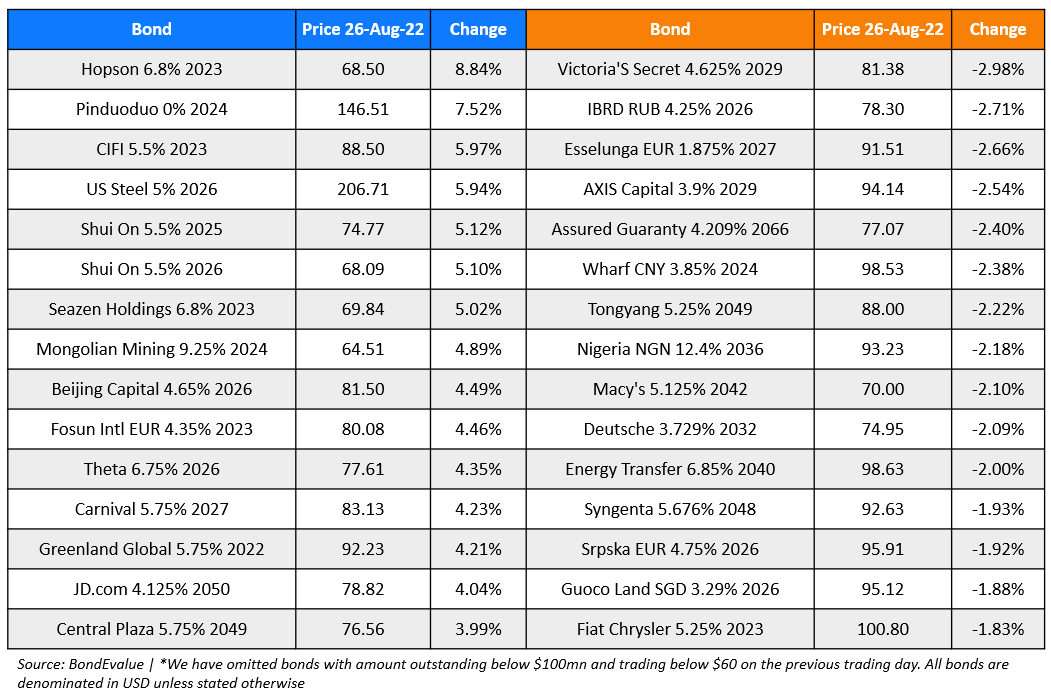