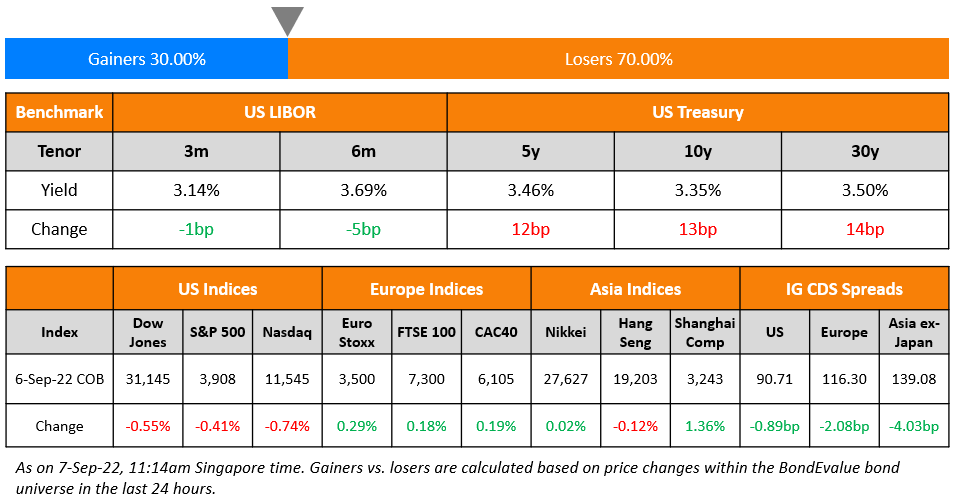 US 10Y Treasury yields were 10bp higher at 3.35% and the 30Y yield was up 11 bps to 3.5%, its highest level since July 2014. This move led to long-tenor/high duration bonds falling the most. Besides, the 2Y Treasury yield was also up 10bp after strong ISM Non-Manufacturing data that rose to 56.9 in August vs. expectations of a decrease to 54.9 post July’s 56.7 reading. This indicated a second consecutive month where the US service industry picked-up. The positive data print led to an increase in the probability of a 75bp September Fed rate hike to 70% from 57%. This in turn led to a spike in 2Y yields.

US equity markets were thus lower on Tuesday with the S&P and Nasdaq down by 0.4% and 0.7% respectively. However, European markets ended in the green – DAX, CAC and FTSE were up 0.9%,0.2% and 0.2% respectively. Brazil’s Bovespa fell 2.2%. In the Middle East, UAE’s ADX and Saudi TASI were down 0.3% and 0.9% respectively. Meanwhile Asian markets have opened lower today by 0.5-1% on average, echoing the move in Wall Street. Asia ex-Japan IG CDS spreads tightened by 4bp. With respect to central banking policy, the Reserve Bank of Australia lifted its cash rate by 50bp to 2.35%. They reiterated their long-held view that it will ultimately lift the cash rate to 3.6% with an aim to keep inflation in 2-3% range. 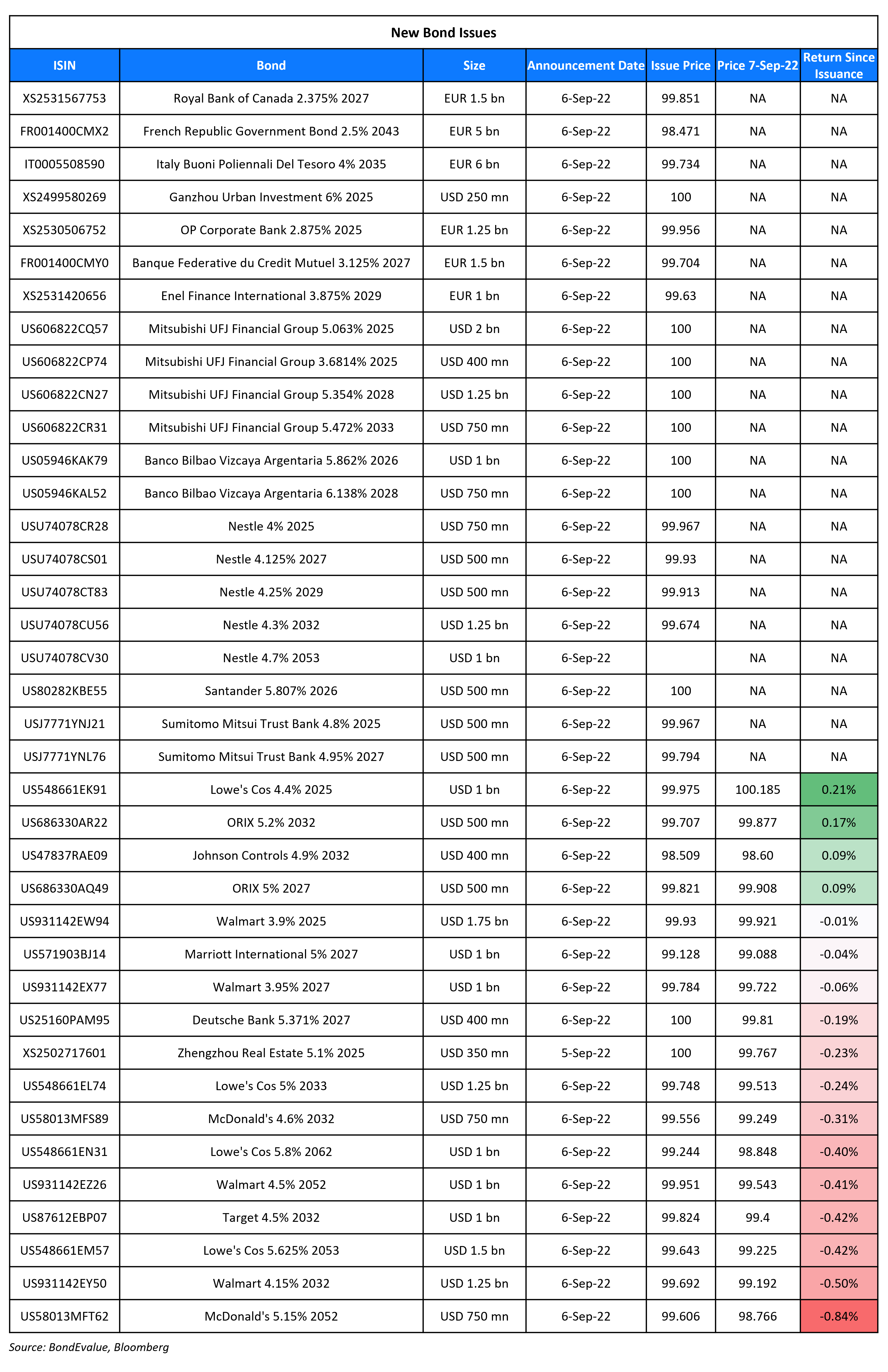 Indonesia raised $2.65bn via a three-tranche deal. It raised

The senior unsecured bonds have expected ratings of Baa2/BBB/BBB. Proceeds will be used to repurchase certain outstanding dollar bonds under a tender offer launched on September 6.

Deutsche Bank raised $400mn via a 5Y bond at a yield of 5.371%, 15bp inside initial guidance of T+210bp area. The bonds have expected ratings of A2/A-. Proceeds will be used for general corporate purposes.

BBVA raised $1.75bn via a two-tranche deal. It raised

The senior non-preferred bonds have expected ratings of Baa2/BBB+. Proceeds will be used for general corporate purposes.

Santander raised $500mn via a 4NC3 green bond at a yield of 5.807%, 25bp inside initial guidance of T+250bp area. The senior unsecured green bonds have expected ratings of Baa3/BBB+. Proceeds will be used for eligible assets within the Santander Group Green, Social & Sustainability Funding Global Framework. The new bonds are priced at a new issue premium of 8.7bp vs. its existing 3.8% 2028s that yield 5.72%.

The senior unsecured bonds have expected ratings of Aa2/AA/AA. Proceeds will be used for general corporate purposes.

Term of the Day: Duration

Duration or Macaulay Duration for a fixed income security is the weighted average time until repayment of the invested amount. Duration is measured in years and for coupon-bearing vanilla fixed-rate bonds, duration is less than the tenor of the bond. The higher the duration, the higher will be the change in a bond’s price for a given change in interest rates. Given duration’s weightage to coupon payments, it is a more accurate measure of interest rate risk vs. the tenor of the bond. The higher the bond’s coupon, lower will be its duration and; the higher the tenor, greater will be the bond’s duration, all else equal. For very long tenor bonds like century (100Y) bonds or very high coupon bonds, the duration is significantly less than the tenor. On the other hand, zero coupon bonds’ duration are equal to its tenor.

To learn more about bond duration in detail with illustrative examples, click here

“The persistence of core inflation and its impact on inflation expectations along with wage dynamics will be key to determine whether a steady pace of interest-rate hikes should be maintained. The risks of a broad-based and protracted recession with a reductive impact on inflation would point towards a slower pace of rate hikes or a pause.”

“A clear tightening or even too fast a normalization could unwarrantedly destabilize the transmission mechanism and the real economy, making it harder to achieve the inflation target beyond the short run”

“There’s a catalyst to go at the beginning of the month with the FOMC on the 21st and a number of folks trying to go ahead of the inflation print on the 13th… We think the first two weeks of September might be equally busy.”

On Dollar Pain Spreading Beyond Emerging Economies to Developed Peers

Maurice Obstfeld, a senior fellow at the Peterson Institute for International Economics

“A stronger dollar generally comes with higher short and long-term interest rates in the U.S., or with stress in global markets and a flight to the dollar’s perceived safety… Those tighter financial conditions cause developed economies everywhere to slow.”

Sayuri Shirai, a former Bank of Japan board member

“Just by raising policy rates, other countries are unlikely to stop the depreciation of their currencies… dollar strength not only reflects an expectation about the federal funds rate hikes this year — and thus higher demand for US fixed-income assets”.

“We can think about having a soft landing… very hard bet to place. And the markets are not necessarily calling for that.”

“A soft landing is that hard to land the plane on. The economy is in pretty good shape… We are sitting on a fair amount of cash”

“The US economy can achieve a soft landing, even though the path is narrow” 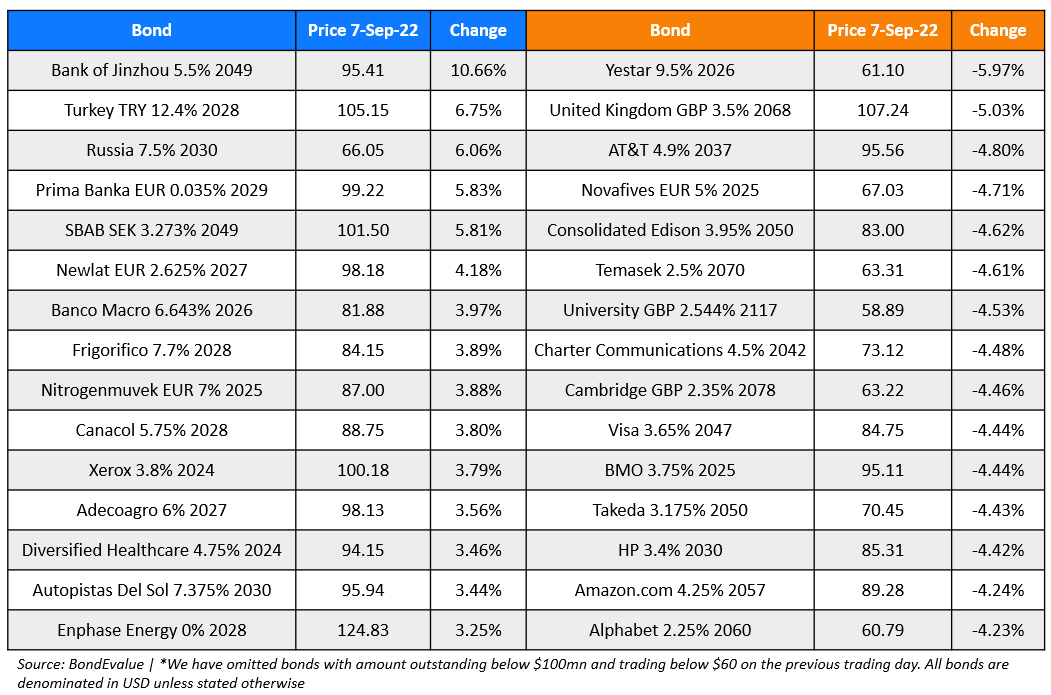