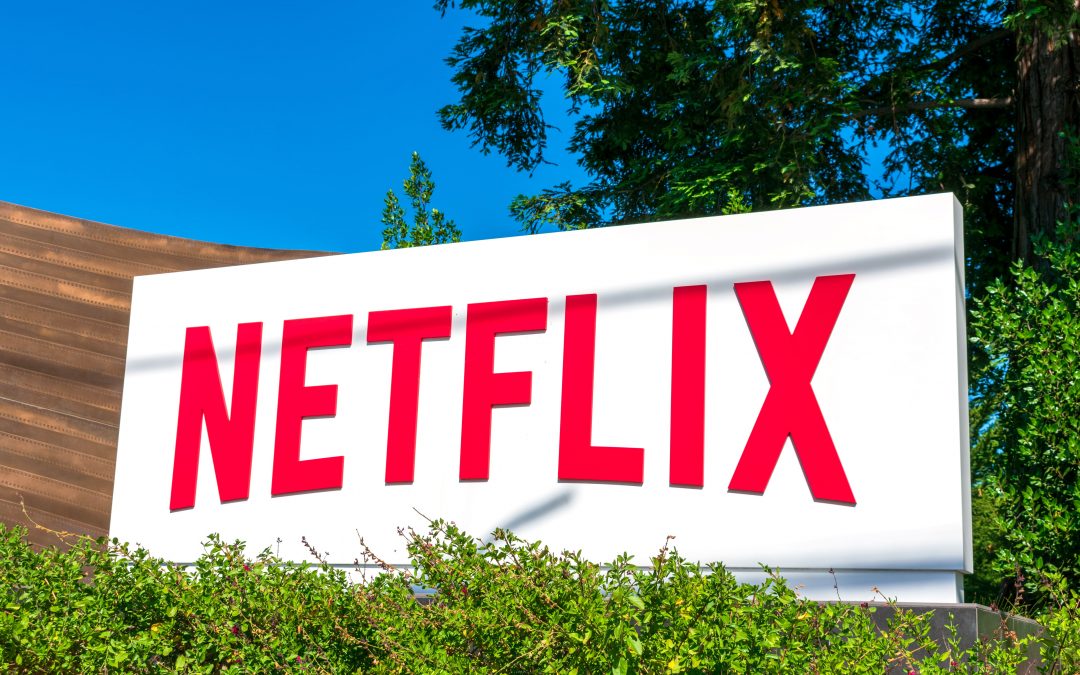 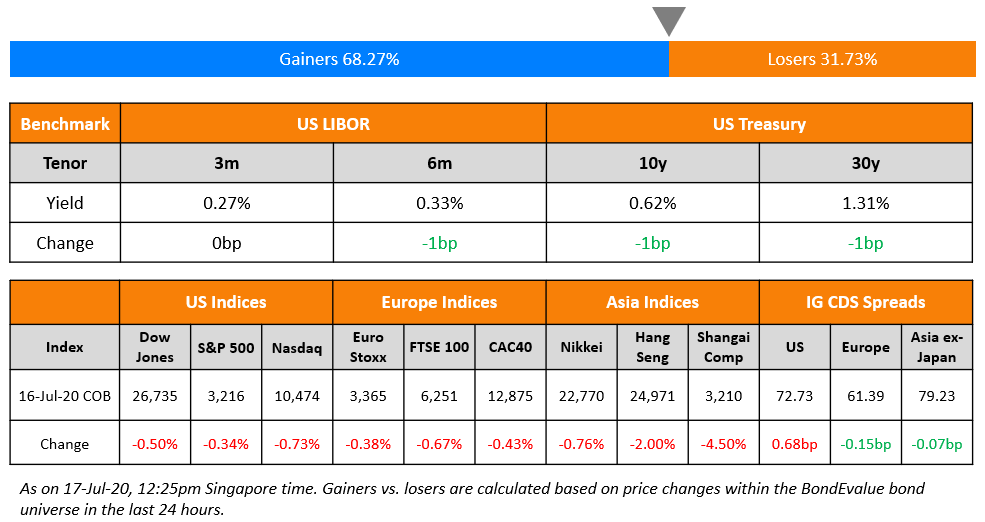 Wall Street slipped overnight on the possibility of renewed lockdowns in response to soaring coronavirus cases and an uptick in daily death rates. Stronger than expected US retail sales at 7.5% had little positive impact and the initial jobless claims decline of just 10,000 to 1.30mn didn’t help. Nasdaq underperformed after its recent strong run compared to other indices. European stocks also saw losses heading into the EU Summit today which will focus on the €750bn Covid-19 recovery fund. Volatility seems to be decreasing as a Bank of America index tracking expected volatility in the US treasury market has hit a record low after hitting a record high a few months ago. US treasuries found support and yields were lower by a few basis points. Asian markets are opening unchanged to slightly lower and Asian dollar bond credit spreads are on target to tighten this week as well. 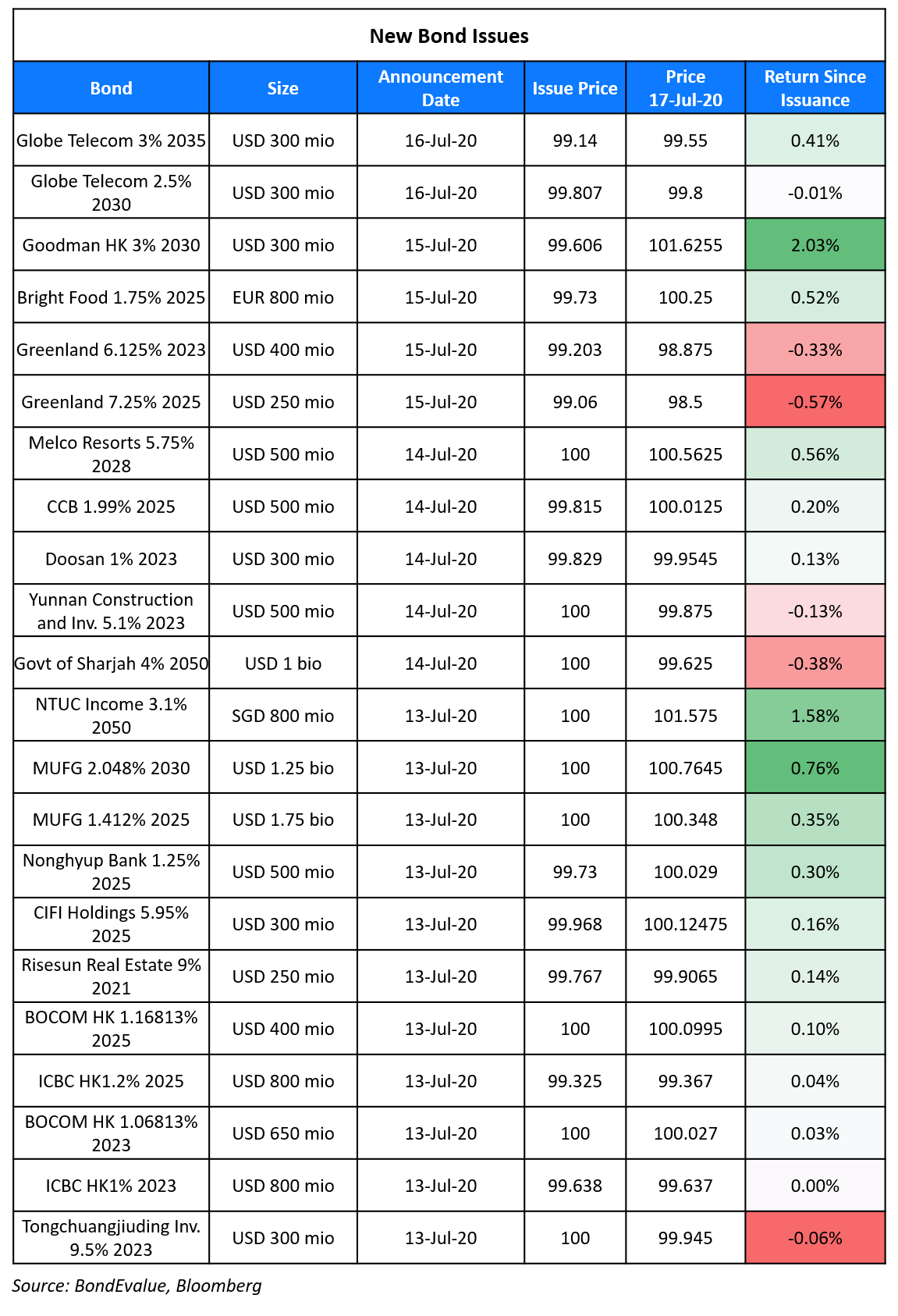 The European Central Bank decided to keep interest rates and its emergency coronavirus stimulus program unchanged in its meeting on Thursday. Interest rates on its main refinancing operations remained at 0% while rates on its marginal lending facility and deposit lending facility remained at 0.25% and -0.50% respectively. The Pandemic Emergency Purchase Program (PEPP), which was expanded by €600bn last month, was kept unchanged at €1.35tn ($1.54tn) that will be deployed until June 2021 or until when the central bank believes the crisis has ended. The ECB expects rates to remain at their “present or lower” levels until it has seen the inflation outlook “robustly converge to a level sufficiently close to, but below, 2% within its projection horizon, and such convergence has been consistently reflected in underlying inflation dynamics.” ECB President Christine Lagarde said, “Unless — and we don’t see it for the moment frankly — but unless there were significant upside surprises, our baseline remains that we will use the entire envelope of PEPP.” European Union leaders will be meeting at the European Council Summit this weekend to negotiate the proposed €750bn ($853.8bn) EU Recovery Fund. 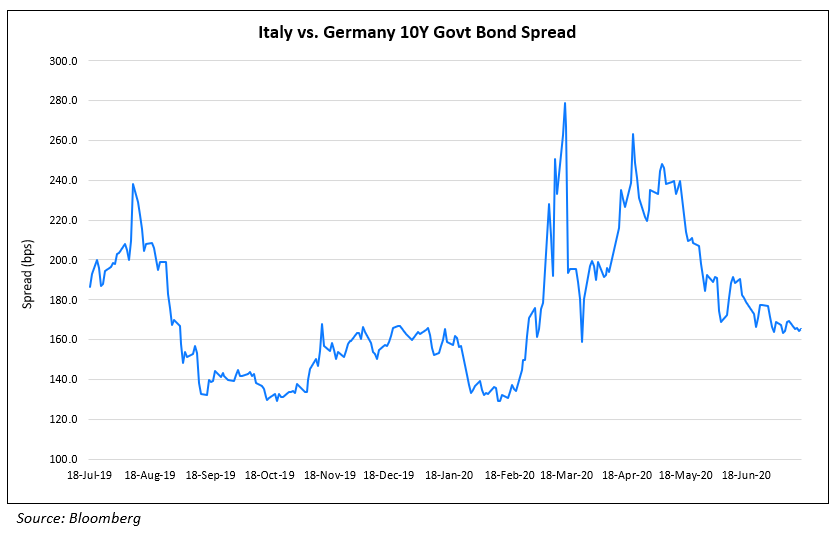 The Federal Reserve’s balance sheet has seen many expansions and contractions over the years. As per the Fed, in the aftermath of the 2007-08 crisis, the total assets had increased from $870bn in August 2007 to $4.5tn in early 2015. The assets declined to under $3.8tn reflecting the FOMC’s balance sheet normalization program between October 2017 and August 2019. The total assets again started to increase since September 2019 to ~$7tn as on July 15, 2020. This is roughly $210bn lower than its recent peak on June 10.

Fed’s purchases of debt have also moderated. According to the Financial Times, just $104bn or 4% of the planned $2.6tn stimulus size has been deployed towards 11 emergency amenities and this number has been consistent over the last 7 weeks. This has forced strategists to revise their forecasts of Fed’s total assets by year end. As per an analyst forecast compiled by FT this month, the balance sheet size by year end would rise to $8.5tn against the May forecast of $9.5tn. The news was received with mixed feelings with a few strategists backing the Fed plans. Robert Tipp, head of worldwide bonds for PGIM Fixed Income conveyed his sentiment by saying “They are now down from an unsustainable and spectacular level of liquidity injections to what is simply seen as an incredible level”.

Netflix reported second quarter earnings on Thursday with revenues of $6.15bn (est. $6.08bn), global paid net subscribers of 10.1mn (est 8.3mn) and earnings per share (EPS) of $1.59 (est $1.81). EPS missed analyst estimates largely due to a one-time charge in California related to research and development tax credits. The company announced guidance for net subscriber additions in Q3 of 2.5mn, over half of analyst estimates of 5.27mn, which pushed the company’s stock down by ~9% after hours. Bondholders had something to cheer about as Netflix reported its largest ever positive cash flow for a quarter of $899mn. In the chart below, we have compared Netflix’s quarterly cash flows with the yield on its 5.75% bonds due 2024 over the past five years. Bond yields falling indicate rising bond prices, given the inverse relationship between bond prices and yields. 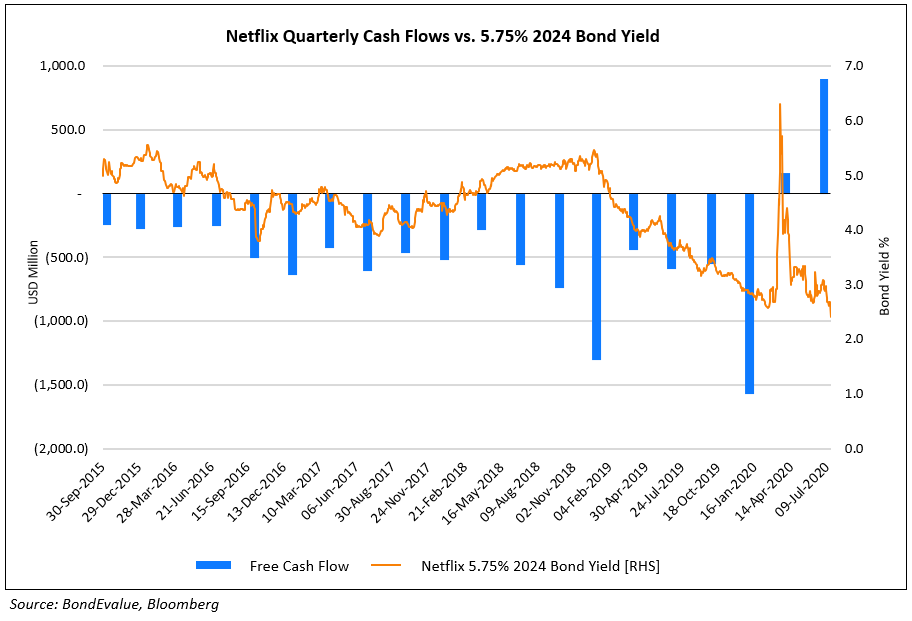 After remaining headless for two weeks, the Central Bank of Ukraine is set to get a new head. The parliament of Ukraine appointed the head of state-run bank Ukrgasbank, Kyrylo Shevchenko as the new Governor of the country’s central bank. The sovereign bonds rallied as the market welcomed the news. The new appointment, nominated by President Zelensky was backed by a clear majority of 332 lawmakers. This is seen as a positive signal to the IMF and has the potential to put an aborted bond issuance back on track. The bank had been embroiled in controversy over the last two weeks after the previous governor Yakiv Smoliy quit alleging interference from the state, which resulted in a sell off of the sovereign bonds and forced the government to pull a Eurobond sale. Smoliy’s unexpected resignation also raised concerns at IMF which had set aside a $5bn assistance program for the country and views the central bank’s independence critically. Although the new central bank governor has loads of experience, the independence of the central bank is still a concern. “He is a middle-ground candidate,” observed Viktor Szabo, investment director at Aberdeen Standard Investments and added “He is a technocrat, he has banking experience and he is close to the market. On the independent bit – we don’t know yet.”

Spread is simply the difference between two financial instruments. The spread is an important metric tracked by investors to understand relative value and change over time. Commonly tracked spreads include Z-spread and Treasury spread.

On Urging IMF to Open the Cash Floodgates – Yi Gang, governor of the People’s Bank of China

Yi Gang wrote in an opinion piece in the Financial Times that an issuance of SDRs – the IMF’s internal monetary unit – is needed to help countries to contend with the COVID-19 pandemic. “A general allocation of SDRs, which are sometimes called ‘liquid gold’ and can be created with the stroke of a pen, is the missing piece in (the) IMF’s crisis response,” Yi wrote.

On the Outlook for the Fed’s Bond-Buying Program

William English, former director of the Fed Board’s Division of Monetary Affairs, and now a professor at the Yale School of Management.

“There is a transition that they have to negotiate over the next few meetings from purchasing assets for the avowed intention of market functioning to more traditional large-scale asset purchases” to reduce term premiums and so lower long-term borrowing costs, said William English.

Ralph Axel, a strategist at Bank of America Corp

“The Fed is very comfortable with having a tremendous footprint in the bond market,” said Ralph. “They will want to keep long-term rates low in a good economy as well as in a very bad one.”

“The market is focused for the near term on more QE coming from the Fed, which may put additional flattening pressure on the yield curve,” said Guneet. “The low-hanging fruit for the Fed would be to increase the amount of Treasury purchases. They could also extend the duration of their purchases — which would give even more support to economic conditions.”

“The Fed clearly doesn’t want to live through what happened to markets during the taper tantrum,” said Subadra. “It may in coming weeks increase the amount of Treasuries it’s buying as a way to ensure yields remain low.”

On Expectations of US Inflation

On Wednesday, Patrick Harker echoed comments made by Fed governor Lael Brainard a day earlier advocating for the central bank to let inflation overshoot its target. “I am supportive of the idea of letting inflation get above 2 per cent before we take any action with respect to the fed funds rate,” Mr Harker said in an interview with Bloomberg Television.

“It is always wise for investors to be mindful of risks that may not be a likely scenario,” said Brett Wander. “Having some inflation-protected securities in your portfolio makes sense, even if inflation is an unlikely scenario.”

While few investors fear an immediate resurgence in inflation, what has become the “concern du jour”, according to Steven Blitz, is what happens when a recovery takes hold. Unprecedented stimulus measures from the central bank, combined with a huge increase in government spending aimed at shoring up demand, could push up prices, eroding the real value of already-low returns on bonds. “I do not expect inflation for the next 12-18 months,” he said. “After that, I could see the economy having a higher inflation bias.”

On Morgan Stanley’s Bumper Trading Revenues for the Second Quarter

James Gorman said the bank was well-prepared to handle the crisis. The strategy was to be ready so that “when markets are very active and volatile, we would still perform very well across our whole investment-banking franchise,” Gorman said. “This was that crisis, and that’s what we delivered.”

“It’s clear that a lot of people did well in light of client activity,” Jonathan Pruzan said. While much of that has continued in the first few weeks of the third quarter, “we would expect a reversion to a more normalized level,” he said. 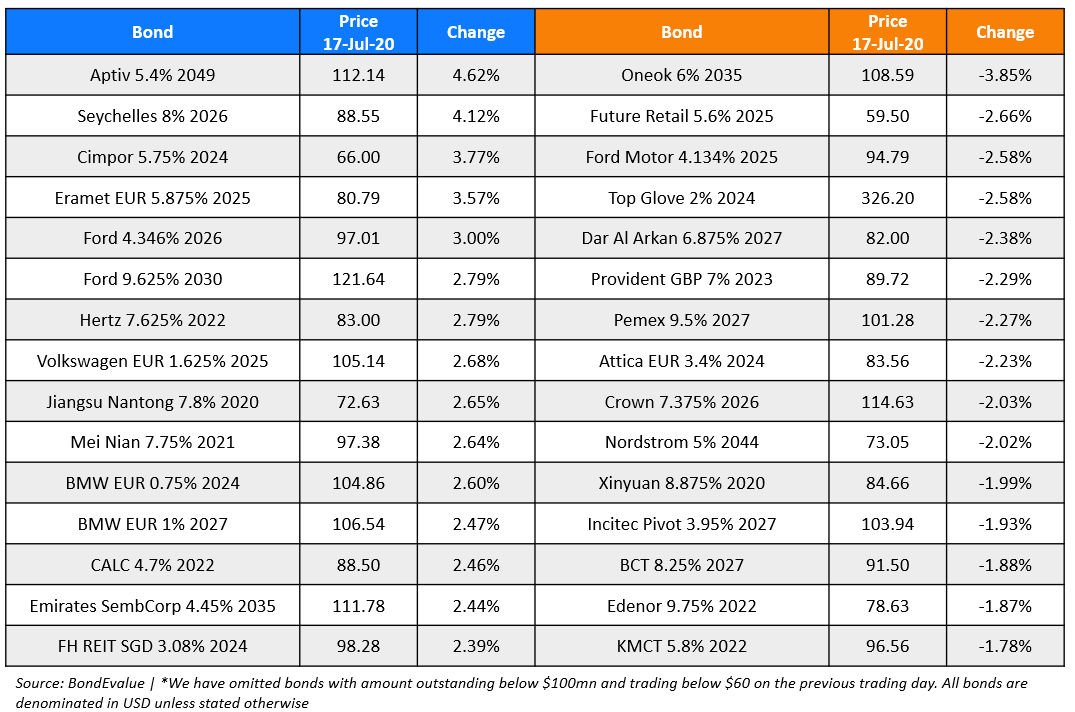