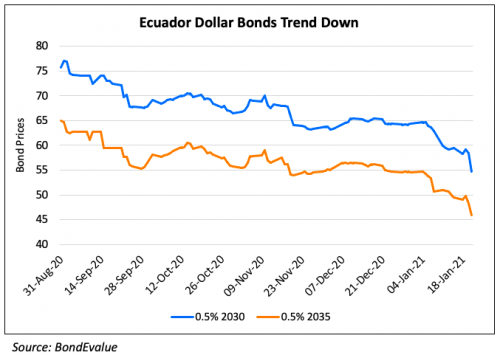 Ecuador’s dollar bonds dropped after the front-runner for the President’s seat Andres Arauz indicated his unwillingness to comply with the conditions attached to a financing package negotiated with the IMF last year. The sovereign’s bonds have been trending lower on concerns that the elections could swing in favour of the left. Arauz is the front runner for President at the general elections scheduled on 7 February 2021 as per an opinion poll and has promised to return to socialist policies. Arauz had said that he would continue making payments to bondholders but that the country’s social spending would take priority over debt servicing. Incumbent President Lenin Moreno who is unlikely to run for the elections had negotiated an IMF package last year at the cost of high austerity measures, including cuts in government spending, personnel reductions, and a hike in value-added tax. “The agreement with the IMF under the current conditions… will not be complied with, because they undermine Ecuadorian families and a program of economic growth in Ecuador” Arauz said in a telephone interview with Reuters.