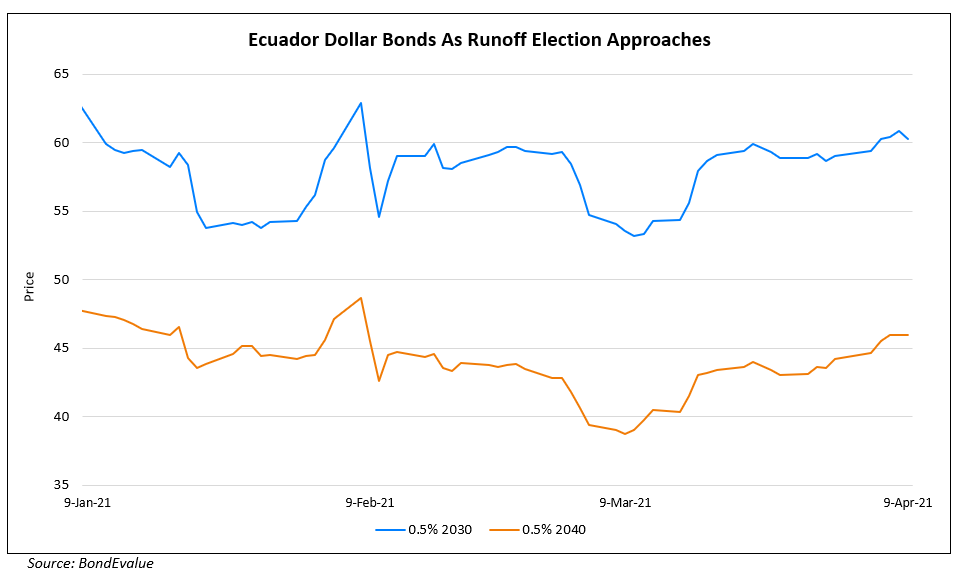 Ecuador is set to vote for a new president on April 11. The vote will decide if the country chooses conservative Guillermo Lasso or Left-wing economist Andres Arauz. The election is critical for the nation, which has just restructured $17.4bn debt last year and owes $45.4bn in foreign debt. The sovereign was also granted a bail-out package of $6.5bn by the IMF with stringent terms to pay civil servants and offload some of its debt to government contractors. Despite the IMF bail-out, Ecuador’s economy shrank by 7.8% post the pandemic. While the former candidate has promised free trade with the US, the latter is seen close to former President Rafaiel Correa and is looking to raise debt from China. Debt holders will be watching the elections closely as the government policies in regards to honoring its obligations and following the IMF terms will be crucial to the markets. Arauz had won the first round by 13% and has indicated that he will utilize $1bn from the central bank reserves for a stimulus package that could be in violation of the IMF deal and could lead to a sell-off in its new bonds. According to a strategist, a victory for Lasso had the potential to trigger a rally and bring the nation back to the international debt markets by 2022 reported Bloomberg.
Ecuador’s 0.5% 2030s were down 0.63 to trade at 60.25 while its 0% 2035s were up 0.25 to trade at 67.25.
For the full story, click here