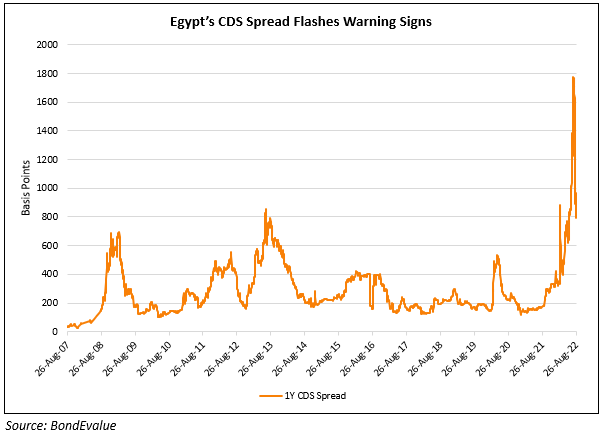 Credit risk across Egypt’s bonds have risen significantly in recent times with some analysts hinting at increasing default probabilities over time. Bloomberg cites JPMorgan data which showed that the yield premium that investors demanded to buy Egyptian bonds vs. US Treasuries rose above 1,200bp for the first time ever, before seeing a record two-decade drop. Egyptian 1Y CDS spreads hit a record 1,774bp in the last week of July and has now eased to still high levels of 862bp. This compares to average levels of 130-180bp from late 2014 to mid-2021.

Egyptian dollar bonds maturing between 2025 and 2030 have lost over 15% of their value in the last 12 months. Bonds maturing after 2030 have lost over 30% of their value. This comes after the nation has been struggling to cope with high inflation. This was especially due to its high import reliance on grains, which got impacted by the Russia-Ukraine war. Egypt’s debt-to-GDP stands at 94%, with the nation having over $5bn of USD and EUR-denominated debt payments in 4Q 2022 and another $9bn maturing in 2023. Bloomberg notes that some investors believe that the country could follow in the footsteps of Russia and Sri Lanka. However, analysts also note that the situation is not as precarious as the other two defaulted sovereigns. While Egypt’s net international reserves have fallen from over $40bn last year to $33.14bn in July 2022, they are sufficient to fund its current account deficit and near-term external debt.