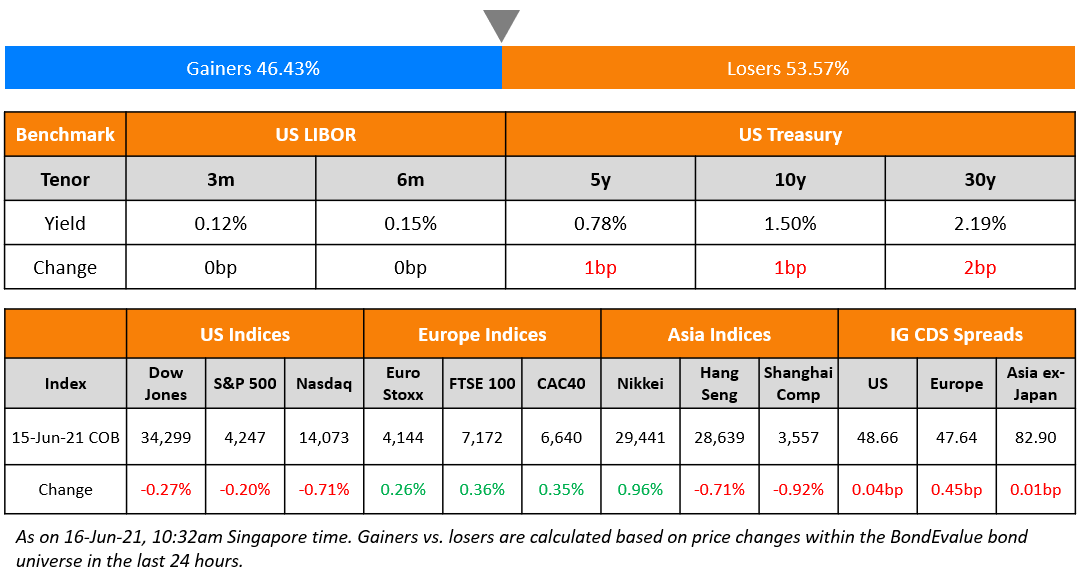 US markets pulled back slightly a day after reaching record level with the FOMC meeting got underway. S&P and NASDAQ were down 0.2% and 0.7% respectively.  Tech weighed down on the indices, down 0.6% while Energy was up 2.1% providing support. Tesla was down 3% and Apple and Microsoft were down 0.6% each. US producer prices saw the fastest increase on record when it registered a gain of 6.6% YoY. However, retail sales were lower by 1.3%, against estimates of 0.6%. US 10Y Treasury yields were flat at 1.5%. European markets rallied with DAX, CAC and FTSE up 0.4% each. Spreads widened marginally – US IG and HY CDS widened 0.04bp and 0.2bp respectively. EU main and crossover CDS also widened 0.5bp and 3.7bp respectively. In the Gulf, the Saudi TASI reversed its gains and was down 0.8% while ADX was up 0.1%. In Latam, Brazil’s Bovespa was down 0.1%. Asian markets started cautiously and are now down ~0.5% with Shanghai down 0.8%. Asia ex-Japan CDS spreads were flat.

Macquarie Group $2.25bn via a three-trancher. It raised:

ANZ New Zealand Intl Ltd (London Branch) raised $1bn via a 5Y bond at a yield of 1.282%, 25bp inside initial guidance of T+75bp area. ANZ Bank New Zealand is the guarantor. The bonds have expected ratings of A1/AA–/A+, and received orders over $2.8bn, 2.8x issue size. Proceeds will be used for general corporate purposes. The bonds delivered the tightest spread for a New Zealand five-year bank deal in the Yankee market as per IFR.

Dubai Aerospace raised $1bn via a 3Y bond at a yield of 1.74%, 35bp inside initial guidance of T+175bp area. The bonds have expected ratings of Baa3/BBB-. DAE Funding is the issuer and DAE is guarantor and is issued off DAE’s global medium term note programme.

The Bloomberg Barclays HY Index YTW fell to a new record low of 3.84%.

On the view that bank dividend restrictions should be lifted soon – Andrea Enria, European Central Bank Supervisory Board Chairman

“We will exit from these dividend recommendations, hopefully soon.” “We have tabled a decision at our board on July 23 and we will communicate shortly after that.” “It’s clear that there is still a lot of uncertainty and credit risk has not materialized for the banks, in the books of the banks, so prudence should still be a polar star in the coming months.” “We clarified that next year there would be only qualitative reflection of the outcomes of the stress test and possibly only an indirect impact via the scores on the pillar 2 requirement. But gradually we will get into treating climate risk as any other risk, so with a reflection in pillar 2 requirements.”
On US corporate bond yield spreads unlikely to get “meaningfully” tighter – Ken Monaghan, co-head of high yield at Amundi US
“Spreads can go tighter, though not meaningfully tighter.” “If nominal rates were to move meaningfully higher on an eventual Federal Reserve move, would those … who have ‘vacationed’ in high yield return to their home markets? Probably some would.”
On COVID debt restructuring push not advanced enough – Kristalina Georgieva, International Monetary Fund chairman
“I’m pleased to say that we are seeing progress on Chad. I hope we would be successful to bring these cases to fruition so that other countries – because it is not only these three countries that are in a difficult situation – step forward early.” “In a highly diversified environment with so many different private creditors and other creditors, I must admit, we are not where we should be.” “We have to continue to work relentlessly, hopefully building from the DSSI (Debt Service Suspension Initiative) to the Common Framework to a much more prudent approach to debt restructuring, and at the Fund this is a top-of-mind priority.”
On big banks temporarily banned from syndicating EU bond sale – Johannes Hahn, European Commissioner for Budget and Administration
“These banks have to demonstrate and to prove that they have taken all the necessary remedial actions which have been demanded by the Commission when deciding about these cases.” “We now expect the submission of the necessary information and then of course we have to analyze and assess it. I cannot predict how long it takes.” It is in the EU’s “interest to include all the key players and banks which have qualified themselves for the primary dealer network,” Hahn said. “But of course the legal aspects have to be respected.”
On China escalating crackdown on $1 trillion wealth product market – Li Huang, Fitch Ratings analyst
“Cash wealth management products are riskier and less transparent,” since they “invest in lower credit quality assets, apply higher leverage, use longer maturity and make less disclosure.”
On the impact of Huarong’s likely MSCI Index removal on ETF funds – Evan Metcalf, a portfolio manager at ETF Management (AUS) Ltd
“ETFs that contain suspended shares may be difficult to trade for many market makers, making the funds less liquid for investors.” “We’re supportive of index providers dropping these names from their selections.” 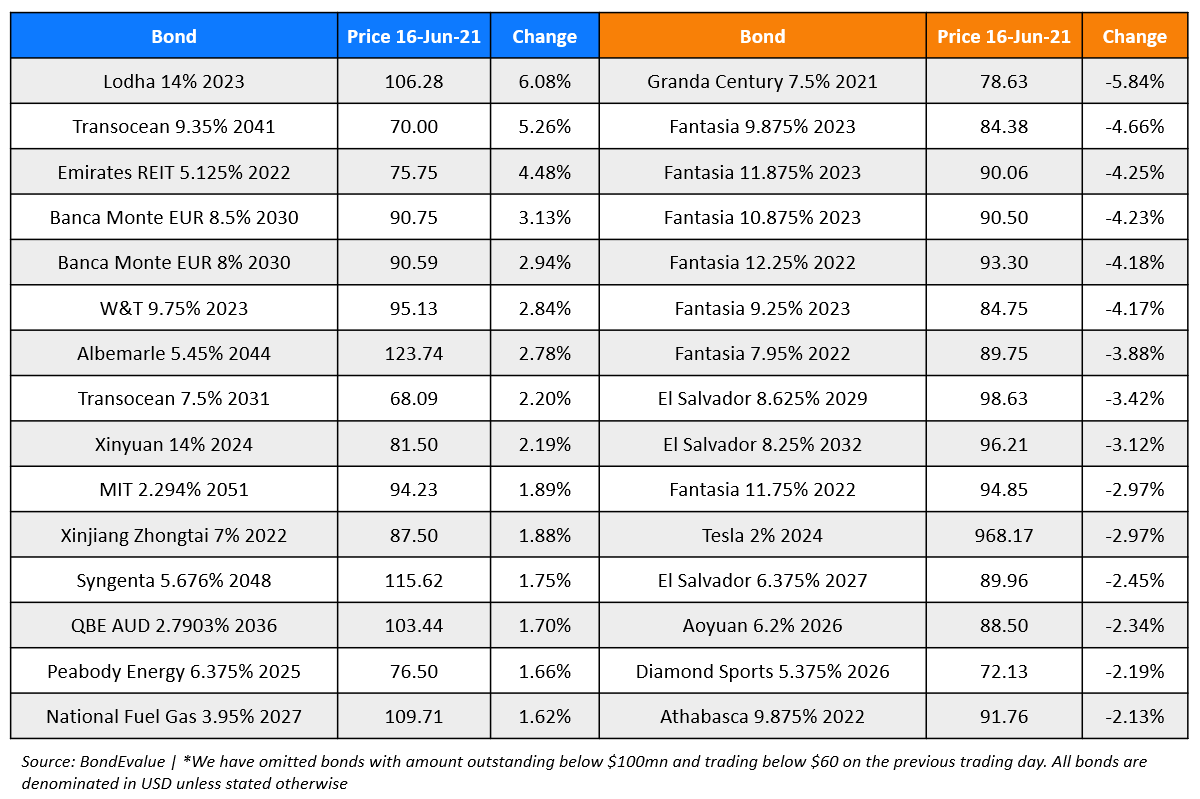