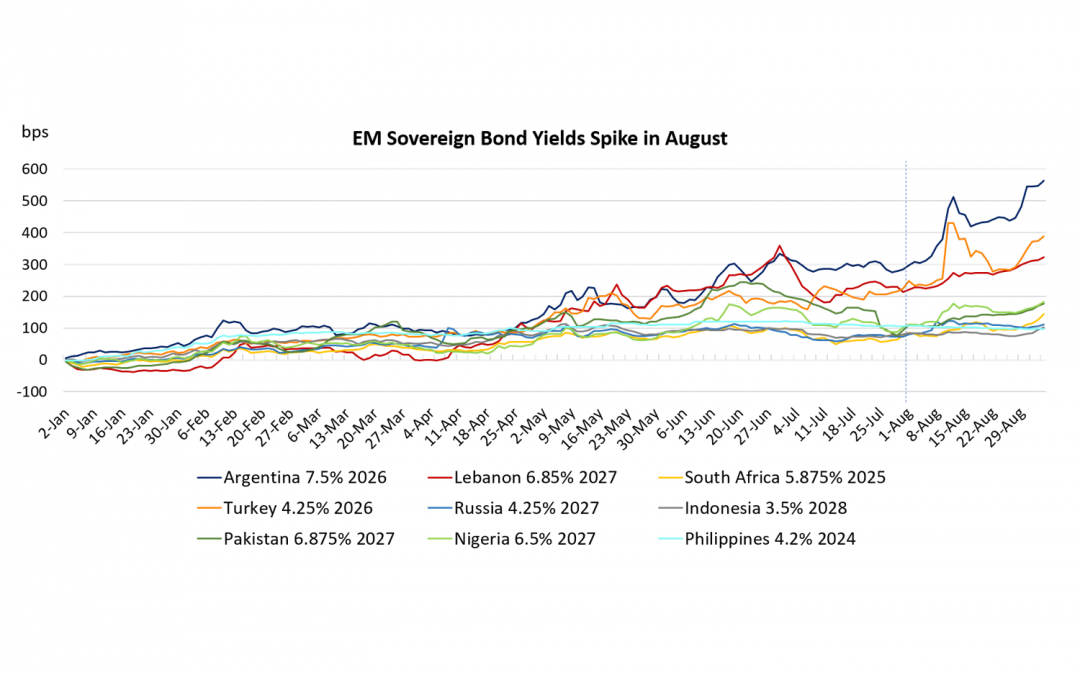 The month of August has been varied for the bond markets with 56.9% of USD bonds in our universe having a positive monthly return (ex-coupon). The remaining 43.1% of bonds have delivered a negative return for investors. The bonds with a negative price return have accounted for a total of USD 12.4 billion in lost mark-to-market value for the entire BEV universe (USD bonds).

This can largely be attributed to the selloff in emerging markets, driven by the crisis in Turkey.  Last month, we reported how USD 8.6 billion was wiped out from Turkey’s USD bonds in reaction to the currency crisis in the region. As seen from the swarm plot below, Turkish bonds tumbled to a monthly low on 15-Aug-18 when the Turkish lira depreciated by ~15% over just two days. 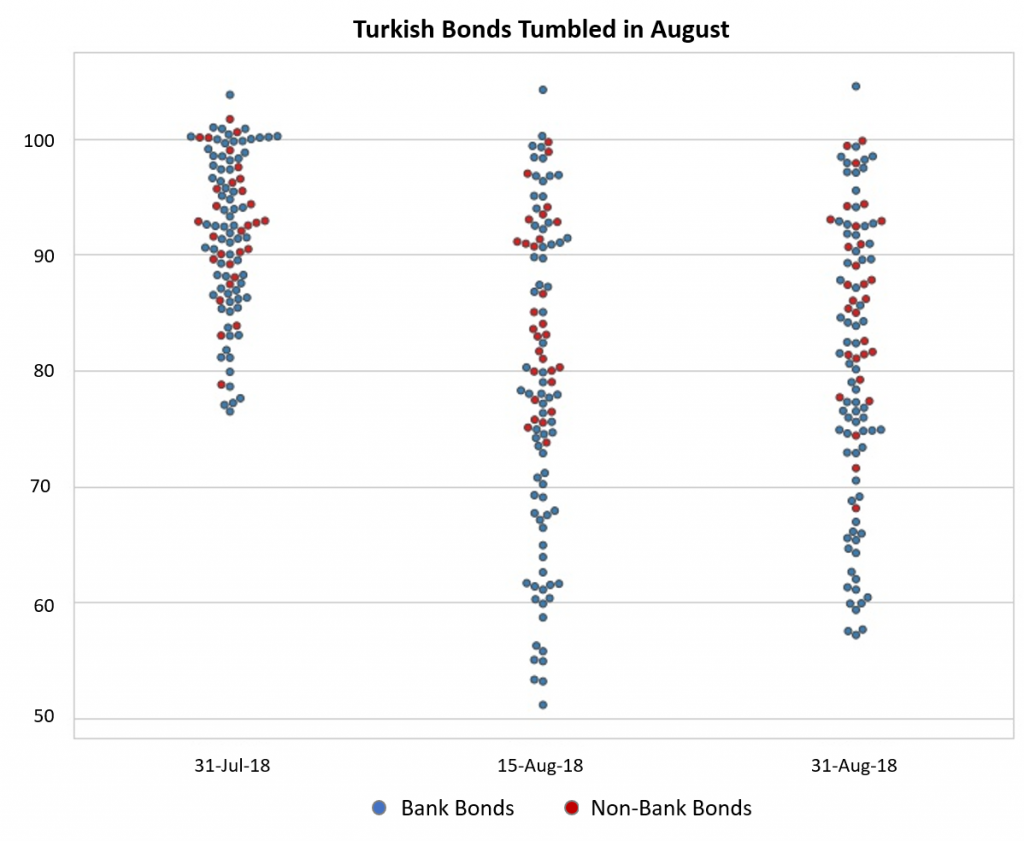 There seems to be no respite for Turkey as more bad news continues to haunt the economy:

“In the next 12 months around USD77 billion of foreign currency wholesale bonds and syndicated loans, or 41% of the total market funding, needs to be refinanced. The Turkish banks hold around USD48 billion of liquid assets in foreign currency and have USD57 billion compulsory reserves with the Central Bank of Turkey, which would not be entirely available.”

“In a downside scenario, where investor sentiment shifts, the risk of a prolonged closure of the wholesale market would lead most banks to materially deleverage, or to require external funding support from the government, or the Central Bank.”

In our blog post last month, we reported an average decline of 16.2% for Turkish bank bonds between 31-Jul-18 and 15-Aug-18. The bank bonds have recovered only slightly since then, ending the month of August with an average return (ex-coupon) of -14.2%.

All eyes are on the Turkish central bank as they are due to hold the next rate-setting meeting on 13-Sep-18.

Bonds of eight other emerging market countries were under pressure in August besides Turkey: Argentina, Russia, South Africa, Indonesia, Philippines, Pakistan, Nigeria and Lebanon. To demonstrate this, we compared returns of sovereign bonds of each of these countries in August.

The nine countries collectively accounted for 89.5% of the USD 12.4 billion decline in market value of USD bonds in the universe.

Argentina’s sovereign and corporate bonds were affected by the peso’s continued freefall, depreciating over 25% in August. The Argentinian government is taking bold steps to address the crisis. The central bank raised interest rates by 15 percentage points to 60% on 30-Aug-18, in a bid to shore up the peso.

President Mauricio Macri announced emergency measures to reduce the budget deficit in a television address on 3-Sep-18. The measures announced include an imposition of a new tax on exports and a reorganization of his cabinet that would eliminate half of the ministries. 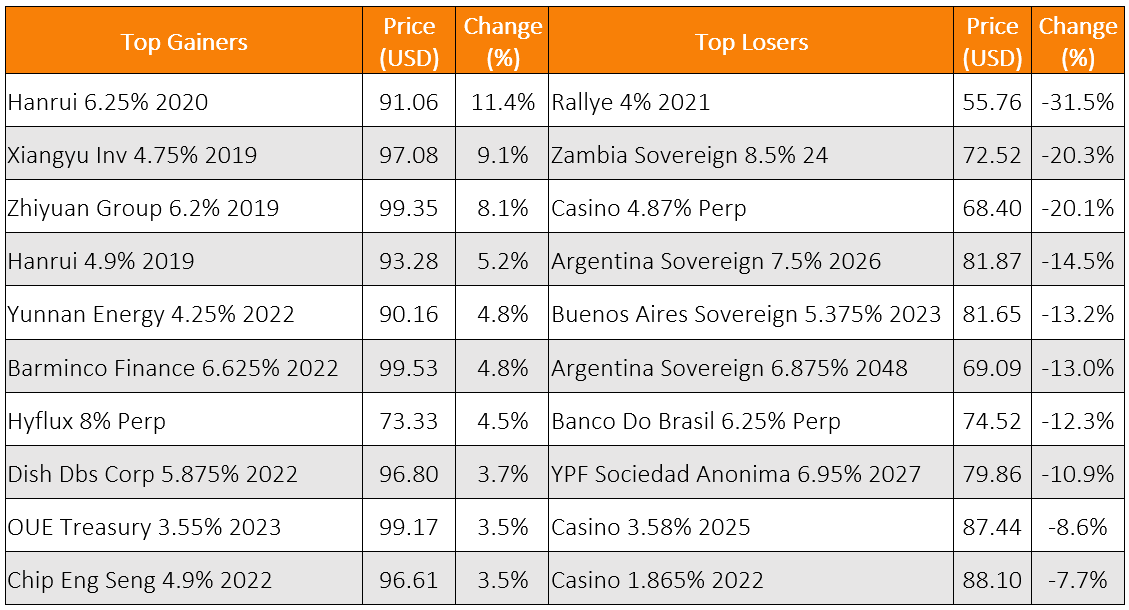 Source: BondEvalue | *We have omitted Turkish bonds and bonds trading below $70 on 31-Jul-18 as illiquidity distorts the change in prices

Underground mining contractor Barminco agreed to a takeover offer of AUD 271 million from diversified mining services company Ausdrill. Moody’s placed Barminco’s credit rating of B1 on review for upgrade following the acquisition news. This was well received by bond investors as Barminco’s 6.625% due 2022 bonds jumped over 4 percentage points on 15-Aug-18.

Bonds of Casino Guichard-Perrachon SA and its parent Rallye SA fell sharply late last week after short-seller Muddy Waters Capital LLC tweeted that the grocer had not filed financial accounts for one of its subsidiaries as required. 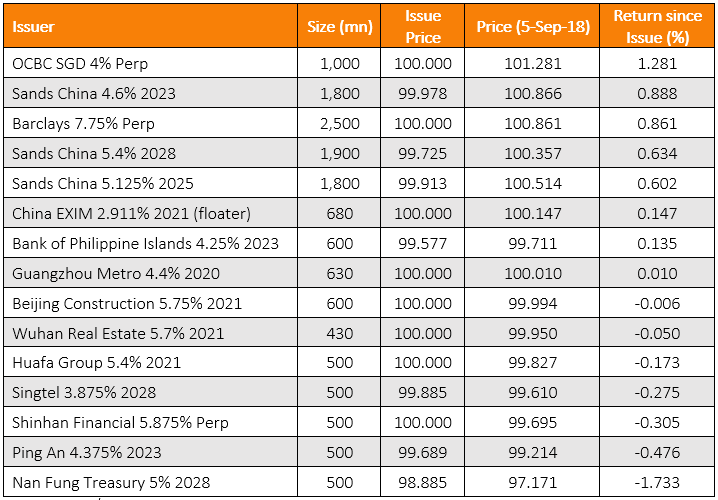 Source: BondEvalue | All in USD unless stated otherwise

Digicel’s 2020 and 2022 bond yields shot up on announcement of an exchange offer and the subsequent downgrade by Fitch and Moody’s. Digicel made the following debt exchange offer to bondholders:

Fitch and Moody’s downgraded Digicel by two notches to C and Caa1 from B- and B2, respectively. Both rating agencies consider the two-part liability management exercise to be a distressed debt exchange. The telecom company’s bonds have been volatile through August with news of the CFO quitting along with weak quarterly earnings last week.

According to an article by Australian Financial Review, the problem seems to be an oversupply of childcare centers in Australia. A mismatch in demand and supply has led to the low occupancy levels for G8 Education. The company indicated that the oversupply in the industry will not improve until at least mid-2019.

Not all news was bad for bond investors, as the company announced that it has secured a new AUD 400 million syndicated bank facility to refinance its current outstanding debt.

Bondholders of Reliance Communications approved a restructuring deal late last month, that entitles bondholders to receive up to USD 118 million in cash and USD 55 million in bonds to be issued by Global Cloud Exchange, a foreign unit of the company. The deal received approval from 83% of the bondholders at their meeting in London on 24-Aug-18. In our blog post, we reported how RCOM’s 300 million 6.5% bonds due 2020 fell to a seven-month low on the news.

The World Bank raised AUD 110 million from a first-of-its-kind global blockchain bond. The bond-i debt instrument is the world’s first bond to be created, allocated, transferred and managed through its life cycle using distributed ledger technology. Commonwealth Bank of Australia (CBA) was the sole arranger of the bond-i issuance.

Moody’s downgraded Li & Fung’s issuer rating and senior unsecured ratings by one notch to Baa2 with a negative outlook, on 24-Aug-18, citing revenue and profit declines from continued store closures. Correspondingly, the Hong Kong-listed supply chain manager’s USD 650 million 5.25% Perps dropped more than three points on the same day as Moody’s cut its ratings to Ba1 from Baa3.  Losing its investment-grade rating, the fixed-for-life securities, which were issued at par in November 2017, fell to a cash price of 75 on the bid. The Company’s US$750 million bonds due 2020 also widened 2 bps to yield 141 bps over US treasuries.