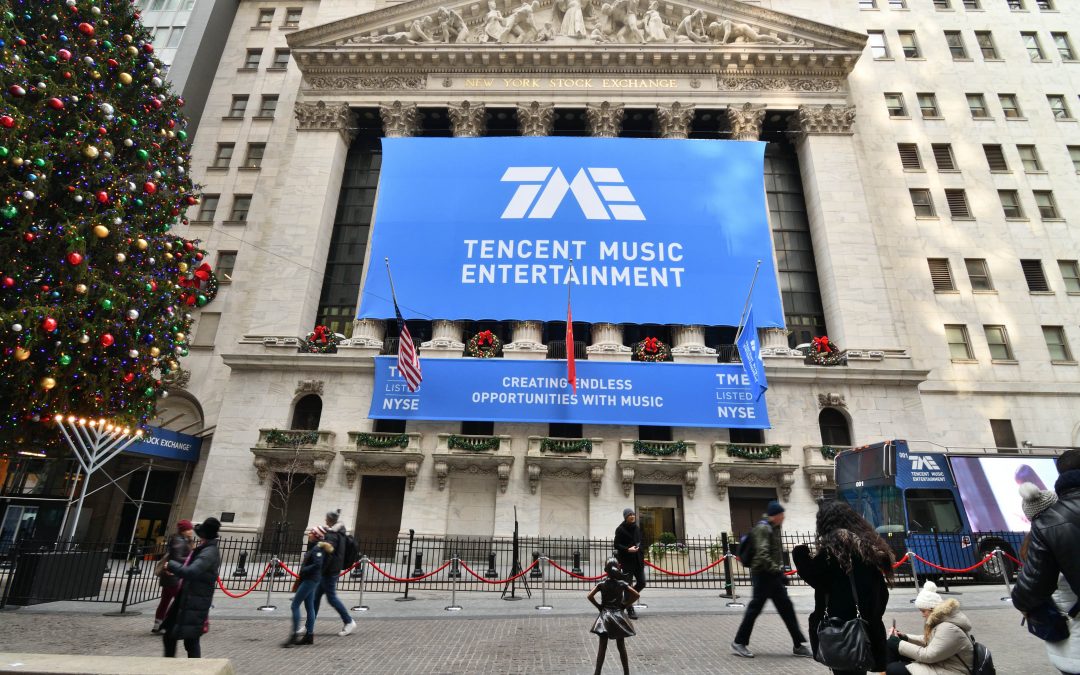 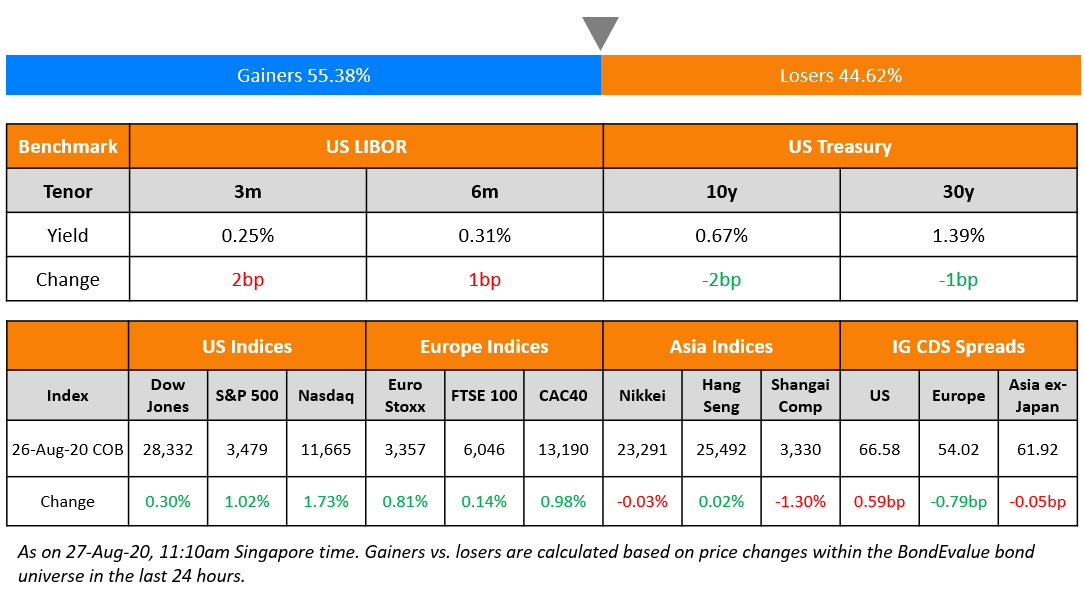 Western markets had a strong rally overnight with Nasdaq and S&P touching new record highs. Gains were led by stocks such as Netflix, SalesForce and Facebook. Sentiment was upbeat as updates on Moderna’s coronavirus drug showed immune responses in young and older patients. European shares also fared well as market overlooked recent regional upticks in cases and focused on additional fiscal stimulus in Germany and France. The US treasury curve steepened with the long end higher by few bps on speculation that Fed Chair Jerome Powell will mention an increase in inflation expectation when he speaks at the Jackson Hole symposium later today. CDS spreads narrowed a bit and new deal issuance in Asia have moderated compared to last week. Asian markets and US index futures are opening lower this morning as investors await Powell’s comments. 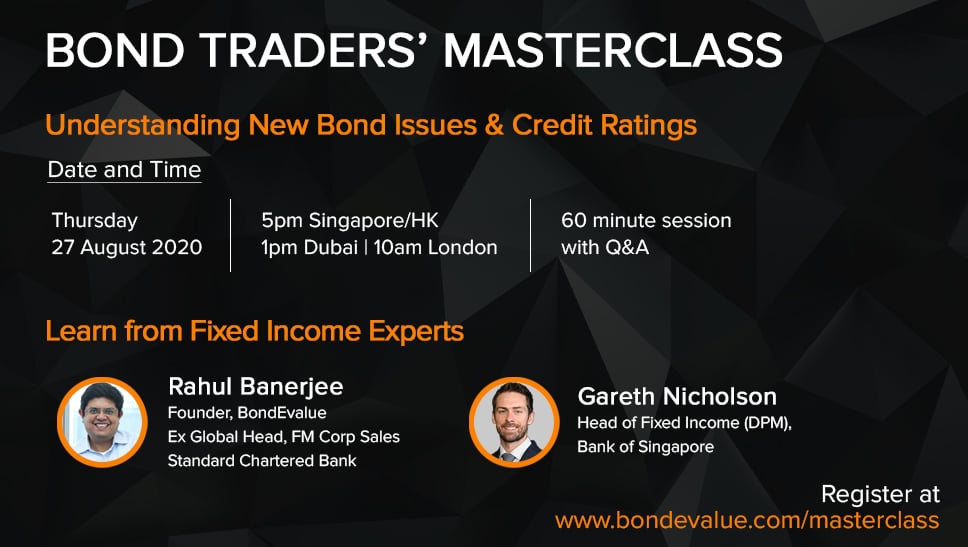 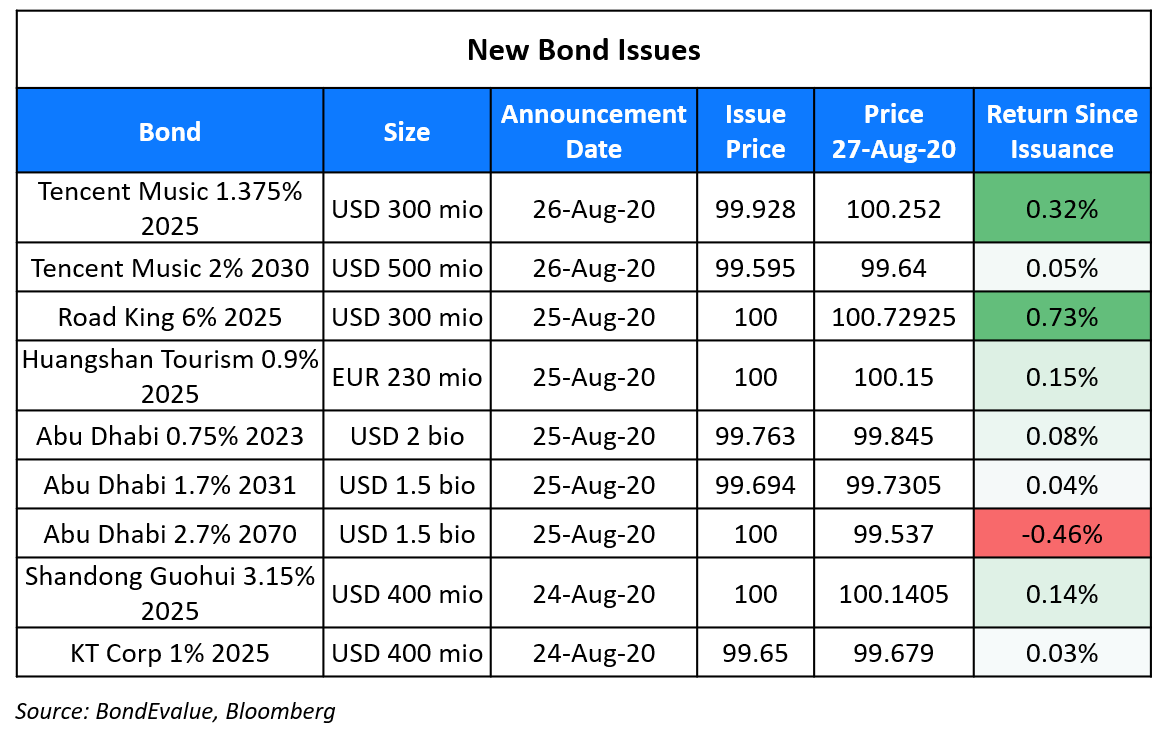 Hysan Development raised $200mn via a tap of its 4.85% Perpetual NC3 bonds (PerpNC3) at a price of 101.625, or to yield ~4.263%, ~40.4bps inside initial guidance of ~4.667% area. This brings the total outstanding to $500mn. The tap received final orders exceeding $2.1bn, 10.5x issue size. The coupon on the perpetuals are fixed-for-life with discretionary coupon (Term of the day, explained below), but which are cumulative. The bonds also have a dividend stopper and pusher with a three-month look-back period.

The onset of the pandemic has brought out the striking contrast between Exchange Traded Funds (ETFs) and the underlying bond markets. Bonds are traded over the counter (OTC), or via a network of dealers and brokers while the ETFs, as the name suggests, are traded on exchanges. The market for ETFs and bonds has witnessed different dynamics during the pandemic, particularly in March when volatility was high. According to FT data, some corporate bond ETFs traded at discounts of more than 5% to Net Asset Value (NAV) in March against 0.1% in January, basically due to the underlying fixed-income market. The approach to pricing the two securities is also different. Bond pricing is complicated due to the fragmented and non-standardized market while the NAV prices of ETFs are based on indicative prices of the underlying bond holdings. Thus, ETFs are seen as a price discovery tool with the added advantage of liquidity. Although, indicative prices may be very different in times of stress, they are considered to be “reasonably estimated and as close as possible to a fair value.” According to a paper by Invesco, US-listed bond ETFs traded a total of $738.8bn worth of shares in March while just $19.8bn worth of bonds were traded in the underlying bond market. This indicates that $719bn worth of ETFs changed hands without an underlying bond being traded. This is cited as one of the advantages of ETFs – liquidity in times of stress.

Bank of England stated that the prices on bond ETFs “appear to have provided information about future changes in underlying asset markets, offering evidence that they incorporated new information more rapidly than the NAV of assets held within their, and equivalent, funds”. Bank for International Settlements added that “Compared with the relative staleness of bond prices and NAVs, ETF prices can be useful tools for market monitoring and valuable inputs to risk management models that require up-to-date assessments.” According to Invesco, it is time to focus on improving how bonds are priced and the OTC markets should have a central reporting of trades and prices. Thus, the price of ETFs may act as the right tool, which provides the much required price discovery lacking in the underlying bond market.

The table below provides the major differences between the bonds and the ETFs. 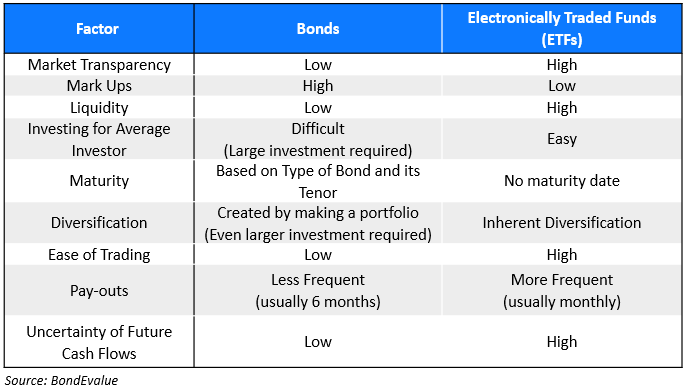 Discretionary coupon is a clause commonly seen in perpetual bonds wherein the issuer has the right to defer coupons at its sole discretion. If deferred, the coupons can either be cumulative or non-cumulative. Cumulative, as the name suggests means that the unpaid coupons accumulate and must be paid at a later date, while non-cumulative means that the unpaid coupons are cancelled and not to be paid in the future.

On the slow, uneven recovery ahead for US economy – Michelle Bowman, Federal Reserve Governor

“Progress toward a full recovery in economic activity may well be slow and uneven,” Bowman said. “The Federal Reserve will continue to monitor progress and respond promptly and flexibly to support the recovery.”

“The rates markets are anticipating the Fed is going to be dovish and willing to withstand inflation being higher for a longer period. In navigating the next 10 years of monetary policy, I think it will be important to focus on what happened in the last 10 years. I think he’s going to touch on that traditional metrics don’t work. You keep rates low and inflation builds. When deficits grow, debt grows and rates stay low. It doesn’t mean inflation follows. When you talk about inflation, it’s not what the Fed does, it’s what technology does.”

“This is longer running than just Covid. If they had wrapped this up last year, Powell would have to signal this policy shift with rates above zero, ” said Hill. “Since we’re already at zero, it means we’ll be at zero even longer and the central bank is going to be even more aggressive about trying to meet its inflation mandate. In the past they pre-emptively hiked to get ahead of inflation pressures. What they’ve shifted to is actually waiting until they get sustained inflation.”

“That means everything is an experiment. We know low inflation has been a symptom and a cause of low wage growth. And that’s a different view than we once had,” she added. “I think it’s important to acknowledge the technological aspect of this is important. The role of technology is an accelerant in the wake of the pandemic as well.”

“They’ve been talking about this for a long time. I think it’s more they’re willing to finally commit, and to say we want to overshoot on inflation, it’s to include more people in the recovery by doing that. It is different from the way the Fed has done things in the past, but it doesn’t really change the view in the financial markets that this will keep rates low forever and a day.”

“I think if the Fed actually achieves this goal, it’s something that financial markets should be worried about because literally it’s about shifting power from the profit share to the wage share,” she said.

“You’re going to see the Fed more willing to tolerate higher inflation. There’s a change in Fed policy in terms of just allowing the economy to run hot. The Treasury is going to be issuing a lot of debt – you have to expect more of a term premium built into the curve, simply from the fact that we’re running massive fiscal deficits. Even the Republicans are willing to spend money today — no one’s pushing back against spending.”

“We’re looking more for a correction rather than meaningful change in direction. Maybe six months out, spreads are tighter than today. In a really strong economy, you should have spreads well below average. We’re surprised at the size of the prospective September calendar that’s being proposed by the capital markets groups around the industry,” he said. “If it looks like we’re going to continue to have these monthly records until year-end, I think spreads are going to go wider,” said Kushma

“Single A companies, where the market’s giving them a pass on their borrowing, may have more credit risk — in terms of downgrade risk, not default risk — over the next 12 months. Financials as an industry still look like something at the margin we’d want to overweight relative to cyclically-sensitive sectors,” said Kushma.

On the importance of fundamentals for emerging market investors

“If you look at the fundamentals of many EMs and then look at the yields, you have to say something doesn’t add up,” said Irigoyen. “For that to make sense, you have to add in that the [US Federal Reserve] and the European Central Bank are the buyers of last resort of all risky assets and [rely on] the perception that nothing can go wrong.” “Investors think they will unwind their positions before the trade blows up. It never works out that way. If interest rates start to rise on the expectation of a sharp recovery, that will put pressure on the rollover of debts that many EMs will have to deal with,” he said.

“People say it’s solved, they have restructured, so everything is fine, but they are not exiting their crises,” she said. “They still have to restructure their local debts, they still have to restructure loans from the IMF, they still have primary deficits of 6 to 8 per cent of GDP — they are still in the first phase of their crisis, bondholders are trapped long and there’s no yield. It’s really hard at this juncture to identify the next big trade,” she said. “We had a nice rally, the appetite for carry has suppressed yields, but we will reach a time when you have to worry.”

On Mexico’s deepest slump since the Great Depression – Alfredo Coutino, an economist at Moody’s Analytics

“Data for the second quarter confirms the Mexican economy had its worst quarterly decline of the last eight decades, after the crash in 1932 caused by the Great Depression” due in part to “the absence of stimulus measures to mitigate the effects on companies and families,” said Coutino. 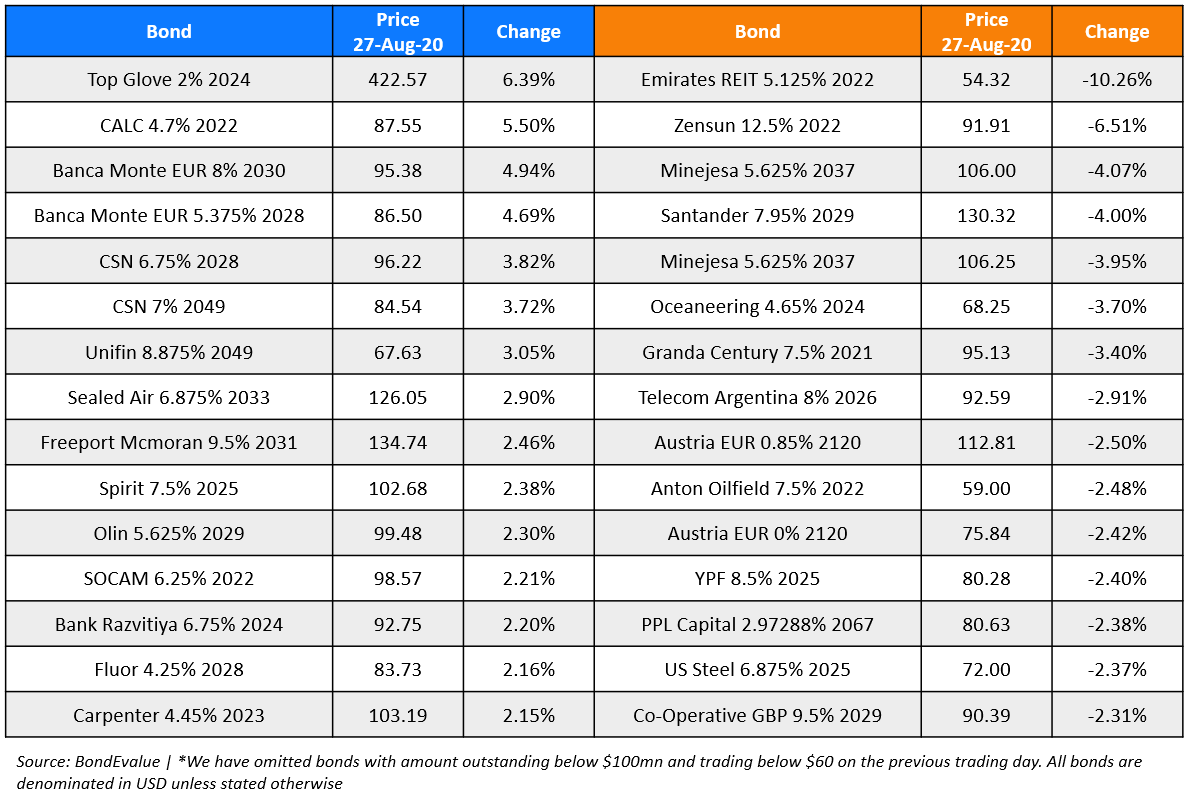