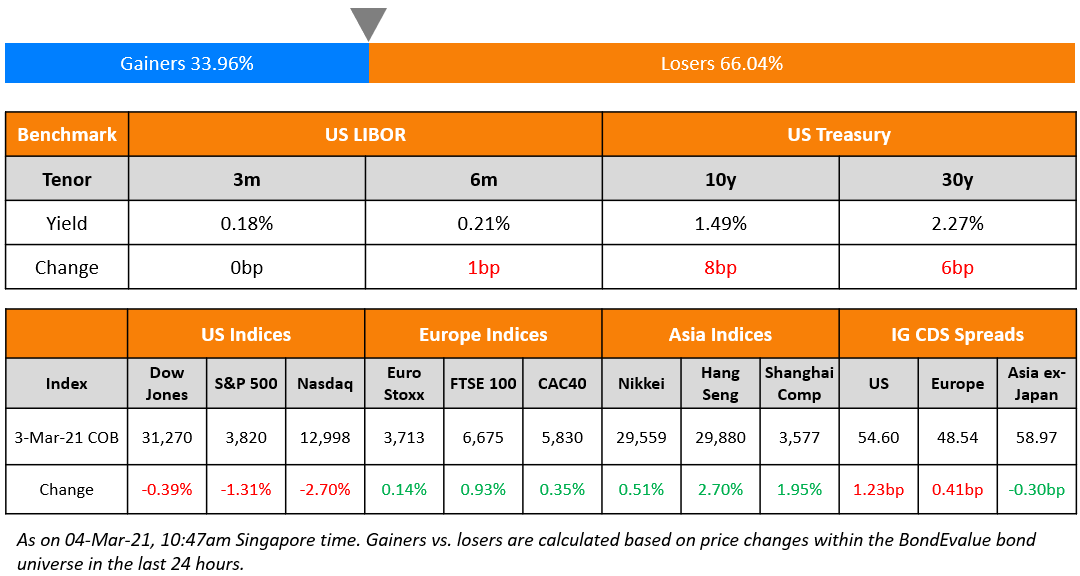 The risk-on risk-off (RORO) sentiment continues as US equities fell again on Wednesday with the S&P down 1.3% and Nasdaq down 2.7% falling just below 13k. US 10Y Treasury yields rose by 8bp towards 1.5% after trading largely flat for three days despite the risk-off tone. US ISM Services PMI disappointed at 55.3 vs. expectations of 58.7 while ADP private sector payrolls rose by 117k, disappointing forecasts of 177k. Europe’s FTSE, DAX and CAC outperformed, up 0.9%, 0.3% and 0.4%. US IG CDS spreads were 1.2bp wider and HY was 5.7bp wider. EU main CDS spreads widened 0.4bp and crossover spreads widened 2.2bp. Asian equity markets are down over 0.5% and Asia ex-Japan CDS spreads are tighter by 0.3bp. 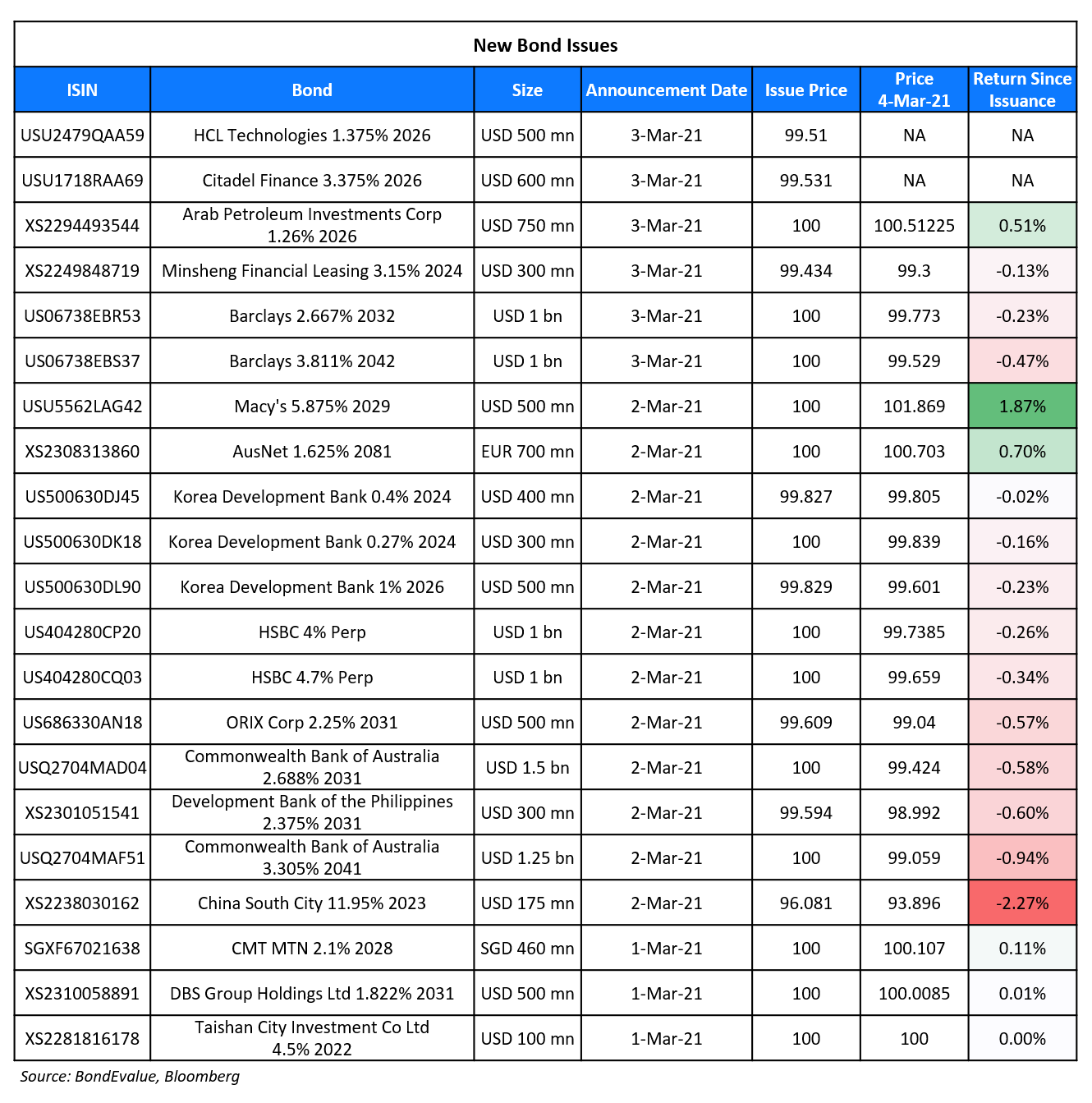 Barclays raised $2bn via a two-part deal. It raised:

The SEC registered Tier 2 bonds have expected ratings of Baa3/BB+/BBB+. Proceeds will be used for general corporate purposes of the issuer and its subsidiaries and/or the Group besides strengthening the issuer/subsidiaries/group’s capital base.

Minsheng Financial Leasing raised $300mn via a 3Y senior loan-backed bond at a yield of 3.35%, 25bp inside initial guidance of 3.6% area. The bonds have expected ratings of Baa3/BBB- and received orders over $800mn, 2.7x issue size. APAC took 97% and EMEA 3% of the bonds. Banks and financial institutions received 60%, fund/asset managers and hedge funds 26%, insurers 8% and private banks 6%. Landmark Funding 2020 is the issuer of the bonds, which will be backed by a facility made available by the issuer to Minsheng Hong Kong International Leasing, a wholly-owned subsidiary of Minsheng Financial Leasing, the guarantor. The issuer is not affiliated with the borrower or guarantor.

The SEC registered bonds have expected ratings of A3/BBB+/BBB+. Proceeds will be used for general budgetary requirements for fiscal year 2021.

Authorized Participants (APs) are market participants, generally institutions that transact directly with the ETF provider in the primary market. They are responsible for changing the supply of ETF shares in the market by creating and redeeming shares in an ETF. They differ from market makers who provide liquidity in secondary markets. As FT notes, when there is a shortage of ETF shares, APs create more shares and when the ETF price moves below that of its underlying securities, APs will take ETF shares out of the market and return them to the ETF provider. These activities help keep the ETF aligned to the value of its underlying assets, its net asset value (NAV). FT ran a story citing the BIS where ‘bond ETFs might have short changed market makers’ during the Covid panic moves last year to prevent a run on their funds. They note that ETF sponsors deliberately handed APs lower quality bonds in order to discourage them from redeeming shares in the ETFs.

“I would tend to argue that the size of the movements is not such that this is a particularly worrisome development,” he said. “But we have to look at it and we are ready to adjust the volume of PEPP [Pandemic Emergency Purchase Program] purchases. The PEPP has that flexibility embodied in it so we can react to unwarranted tightening of financing conditions.”

“At the end of the day we want to preserve favorable financing conditions for the non-financial sector. That’s not just looking at financing costs for governments. It’s a much broader picture we need to look at,” Weidmann said. “For a more sustained push in inflation, we’d need to see corresponding movements in wages,and that’s not something that we observe at this juncture,” he said.

“YCC is working quite well. It relieved the BOJ from the burden of having to buy bonds at a set pace,” said Shiratsuka. “Major central banks will probably follow in the footsteps of the BOJ,” as keeping rates low would be crucial in helping governments manage the huge cost of combating COVID-19, he said.

He said the recent steepening in the yield curve was “unwelcome and must be resisted,” pointing to the merits of a “firm commitment to steering the euro area yield curve.”

Frederik Ducrozet, Pictet Wealth Management strategist
“This has to be as far as any ECB official ever went in terms of YCC commitment,” said Ducrozet.

“I won’t rule out the chance of the Fed adopting a two-year yield cap, if interest rates continue to rise and destabilise the stock market,” said Atago. “But there’s a lot of uncertainty on whether it will work.”

“If the BOJ is being forced to allow yields to move at a wider range around its target, it shows that markets are deciding the shape of the yield curve and that there are limits to the BOJ’s ability to control it,” said Yamaguchi. “It’s hard to control long-term interest rates within a tight range for a long period of time.”

Maggie Hu, an expert in finance and property at the Chinese University of Hong Kong

Hu said Hong Kong tycoons “have formed strategic partnerships [with Evergrande] over the years and their business interests are closely linked and tightly knit together”.  “Under this tough external financing environment, it is harder for Evergrande to obtain debt financing from banks in China,” said Hu. “To raise more funds and to alleviate its current leverage situation, funds could be raised by Evergrande from its subsidiaries.”

Liu Jing, a professor of accounting and finance at Hong Kong’s Cheung Kong Graduate School of Business
“The problem with the Chinese property market is that prices have been too high, which has created a tremendous amount of risk for the economy . . . so they are looking for an additional growth driver,” said Liu.

“China’s energy transition roadmap for 2021-2025 and beyond, widely expected to be unveiled early March, will likely give a much-needed boost to the nation’s green bond issuance that declined for the first time last year due to the pandemic.” 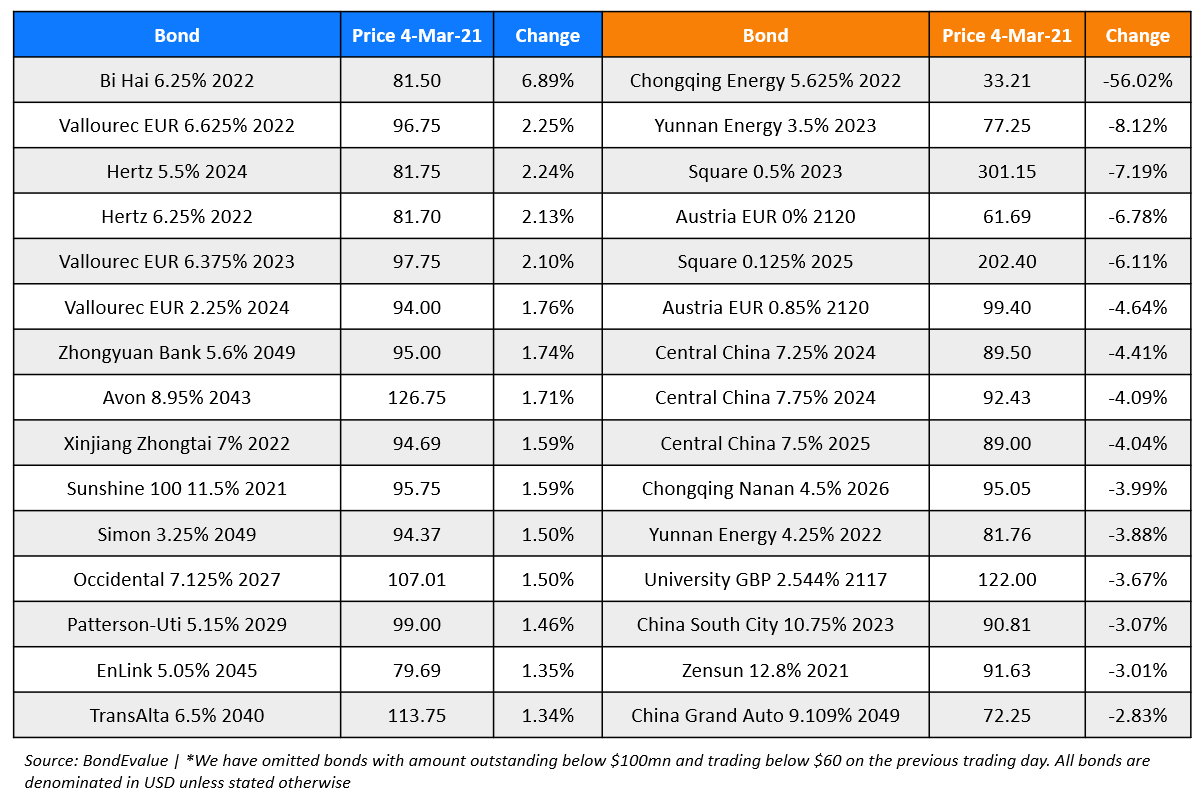 Fitch will continue to rate Pemex despite contract termination