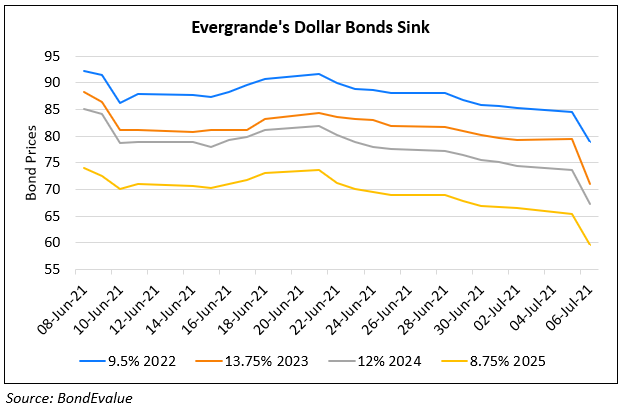 Bonds of China Evergrande crashed over 5 points with its 13.75% 2023s guaranteed by Tianji falling the most, by 8.4 points to 71. HY bond trading company SC Lowy’s CEO Michael Lowy said that Evergrande’s dollar bonds were not providing the buying opportunity that they did during last September’s selloff. He said, “We’re a lot more nervous about Evergrande than we were a few months ago, and certainly the tone coming out of Beijing is a lot more strict”, adding that the company would be in serious trouble if they included accounts payable in their three red-lines as it has doubled over the last 2-3 years. SC Lowy is known as an active dealer in Evergrande’s dollar bonds with Bloomberg reporting that it traded $200mn worth of notes a few days after Evergrande’s bonds tumbled in September on liquidity concerns. Bonds of peers also fell on the above backdrop: