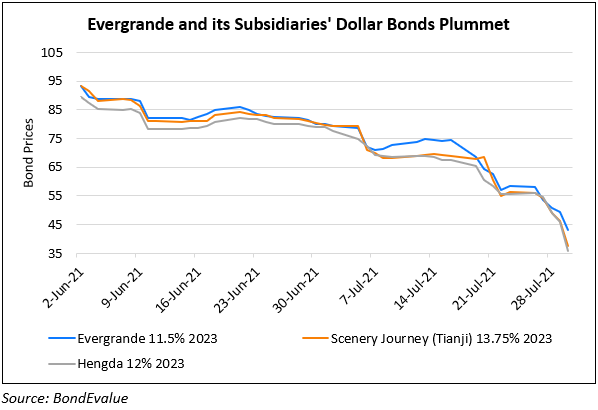 Dollar bonds of Evergrande have taken another dive after a court froze its entire 20% stake in Shanghai-listed onshore subsidiary Langfang Development Co. for three years. The decision is the outcome of a civil lawsuit between Evergrande units and a state-backed builder on shanty-town homes and infrastructure in Wuhan, said a filing as reported by Bloomberg, with no further details released. “It raises investors’ concern on its liquidity crisis as an asset freeze limits its options to raise cash to repay debts,” Bloomberg Intelligence analyst Patrick Wong said. Recent continuous negative news flow has seen Evergrande’s bonds trend lower and now trade at distressed levels in the low 40s and some bonds in the mid 30’s. The major drop was seen in Evergrande’s subsidiaries’ dollar bonds with its 12% 2023s issued by Hengda crashing on the news, down 9.8 points to 36 cents on the dollar.