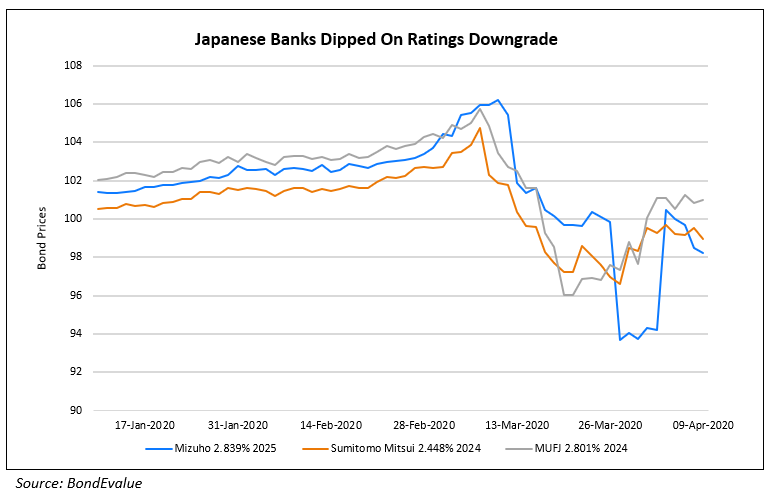 Asian stock markets are opening slightly lower this morning even after U.S Stocks were higher overnight as oil producers got closer to a deal and investors assessed whether the virus spread is starting to lose steam. Rallying oil prices and expectations of further stimulus caused the Dow Jones, S&P 500 and Nasdaq Composite to gain 3.44%, 3.41% and 2.58% respectively.

The US investment grade CDS spread narrowed by 8.5 bps to 105 bps, while Asia ex-Japan CDS spreads narrowed by 6 bps to 131.6 bps. Seven US high grade issuers sold bonds yesterday with new issues starting to trickle in Asia too. 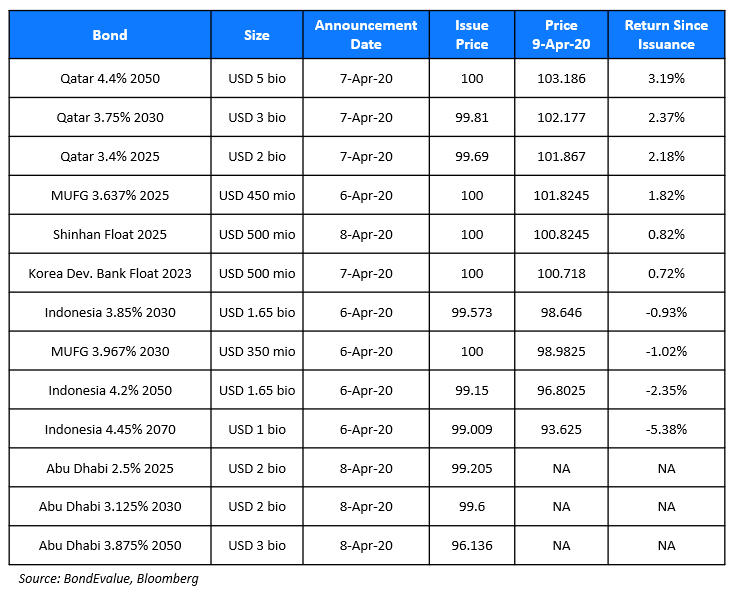 Hong Kong based Far East Horizon Limited is the latest fallen angel in Asia as Fitch Ratings downgraded its Long-Term Issuer Default Rating (IDR) to BB+ from BBB-. The Outlook is Negative. The downgrade is driven by the expectation that asset quality and profitability will deteriorate, which will lead to higher leverage as the operating environment has significantly weakened.

The Indian government recently announced its fund-raising plan of 4.88tn rupees or $64bn for the first half of the fiscal year starting April 1. The benchmark 10 year yield extended its climb showing the market’s discomfort with the heavy debt supply. India’s central bank, the Reserve Bank of India (RBI), recently cut rates by 75 bps and introduced other liquidity measures such as the infusion of $50bn into the financial markets to shore up the economy. The RBI also bought 400bn rupees via open market purchases last month.

The Indian government does not issue any USD denominated debt but recently allowed full foreign ownership in some of its existing rupee denominated bonds and new issues. While this will have long term benefits as it increases the likelihood of Indian bonds being included in global bond indices, it will not have any short term impact as even the existing limits remain under-utilized. There is also a risk of an increase in the borrowing amount announced since it is based on the current year’s fiscal deficit of 3.5% of GDP and with the new stimulus packages, this could increase to as high as 6.2% of GDP. Economists think that the authorities will have to bite the bullet and allow the RBI to buy bonds in primary auctions, a step last done in the 2000s. RBI measures are aimed at keeping the government bond yields in check, which will in turn help to keep the corporate bond yields in check. Yields on 10-year bonds have climbed nearly 50 basis points, to around 6.44%, since late March.

Today is the first auction of the fiscal year, and the market is set to demand punishing high yields as they test the government’s ability to pay as well as the central bank’s intent to cap interest rates.

In the corporate bond space, the picture is much worse. Asian junk dollar bond yields have jumped 700 bps this year, according to Bloomberg. Indian bonds have not been spared as the below table shows how some Indian corporate names’ dollar bonds have fared.

Scores of wealthy private banking clients in Hong Kong and Singapore have invested in structured products called fixed coupon notes in recent years. These notes pay regular coupons even in turbulent times with the catch that the principal is tied to swings in assets like stocks and these losses count mount quickly in times of deep market declines. “In a bull market, investors keep collecting coupons on these notes and they feel it’s a great investment,” said Rahul Banerjee, an ex-Standard Chartered banker and founder of BondEvalue, a fintech that offers bond pricing services to investors. “When the market turns, they get stuck with unimaginable losses,” he said, estimating wealthy Asian investors are seeing losses in the billions of U.S. dollars. The loan-to-value offered for these products was around 50% on average, and some investors have been forced to sell early at steep discounts due to margin calls.

Credit Costs For China’s Banks Could Rise By US$224 Billion In 2020:S&P Global

Loan forbearance such as payment holidays, reduced interest charges, and lengthened maturities are an important type of financial support to alleviate the economic fallout wrought by COVID-19. “The rise in credit costs could be equivalent to more than half our pre-outbreak estimate of sector net profits in 2020,” said SP Global Ratings credit analyst Harry Hu. “The impact to the sector’s net profit in 2020 could be less, if banks opted to lower their provision buffer.”

We expect the Chinese banking sector’s nonperforming assets, as defined by S&P Global Ratings’ criteria, to increase about 2 percentage points to 7.25%. This is after taking the potential impact of forborne loans into consideration. Our forward looking assessments reflect the impact on bank earnings of the economic damage from COVID-19, including our view of a strong rebound in 2021. 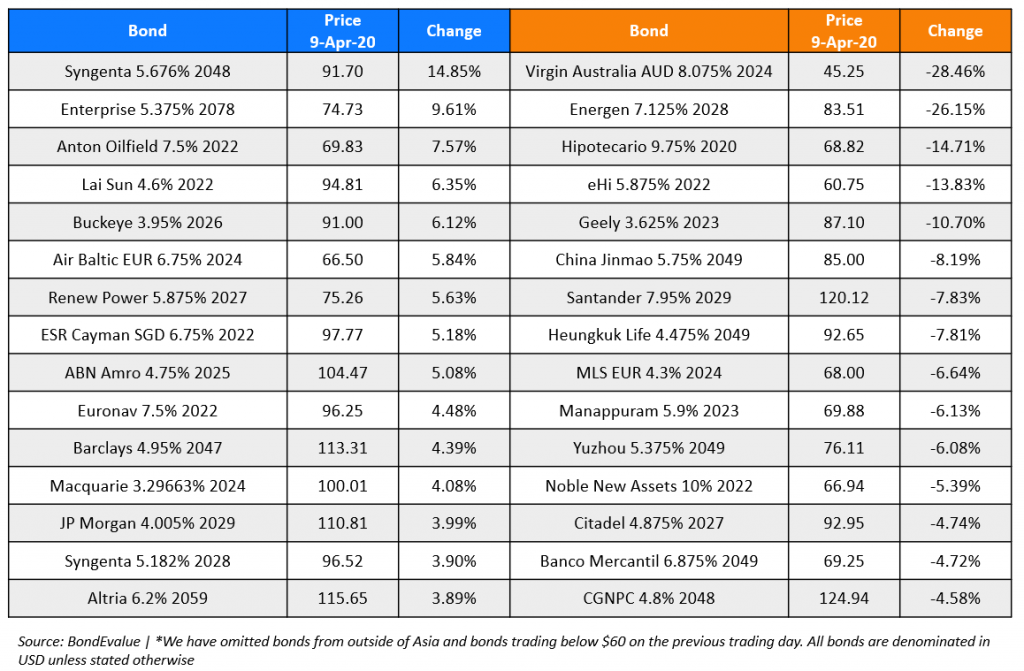