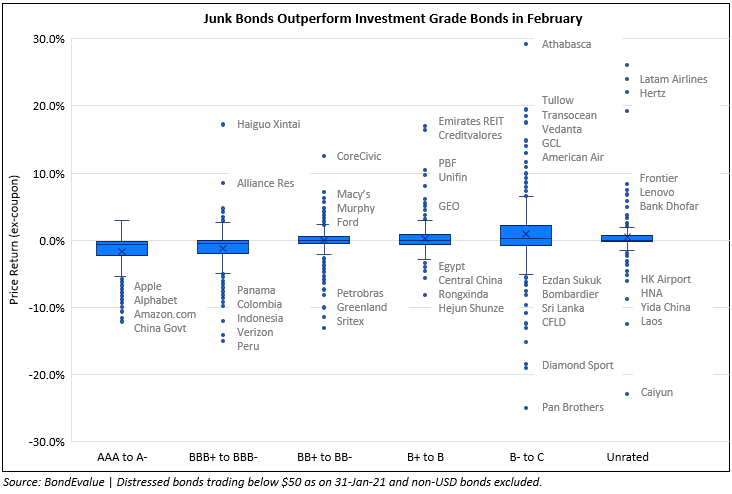 The month of February was a dull month for investors as 66% of dollar bonds in our universe delivered a negative price return (ex-coupon). A sharp sell-off in US Treasuries led to a ~33bp rise in yields for both the 10Y and 30Y, which ended the month at 1.42% and 2.18% respectively. This spilled over to corporate and sovereign dollar bonds with high-rated long-dated bonds worst affected. Bloomberg had reported that for the month of February, the total return for the US High Grade Index was -2.88%, the biggest loss since March 2020. Long duration bonds of highly rated corporates like that of Apple, Amazon, Alphabet, Johnson & Johnson, Microsoft, Temasek and their like fell over 9% in the month.

Global corporate dollar issuance volume stood at $115.3bn for February 2021, up over 2x vs. last February’s issuance of $55.7bn and 2% higher than the month prior. 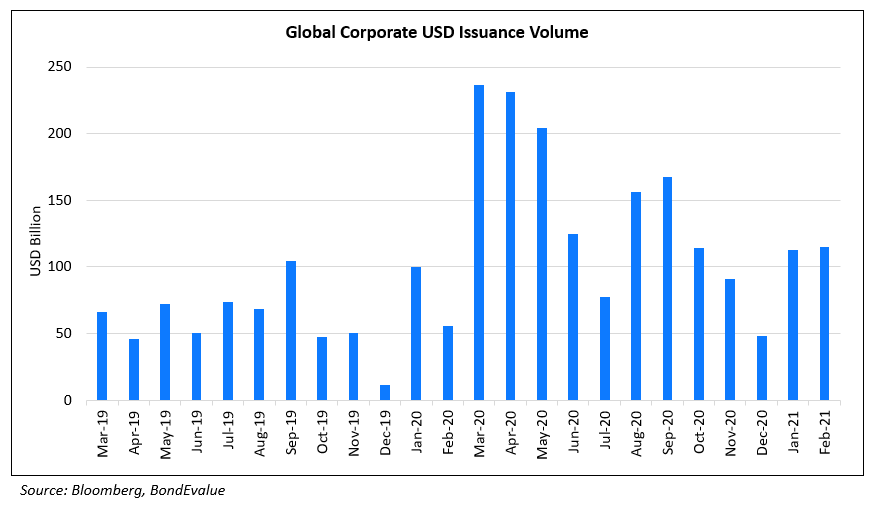 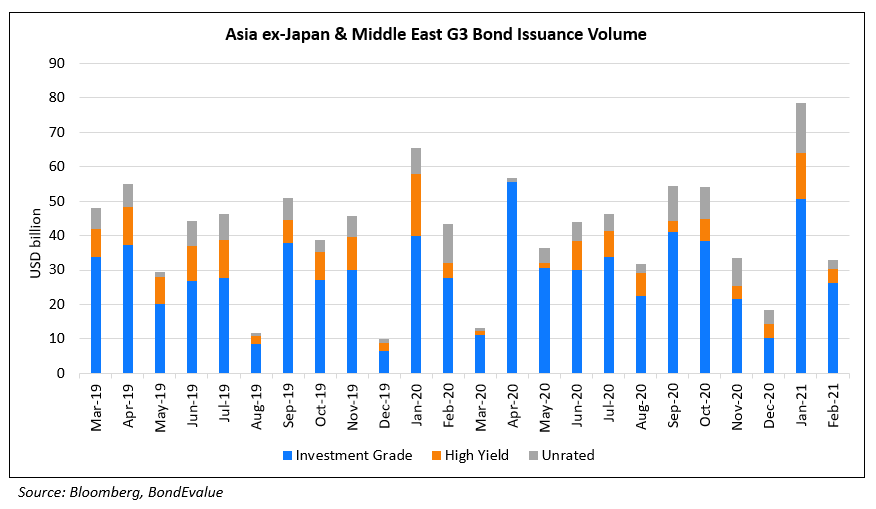 Below are the largest deals in January sorted by issue size. The largest issuances globally were dominated by highly rated IG issuers like Apple, Alibaba and ADB. The largest single IG deal was by planemaker Boeing, which raised $5.5bn via a 5Y bond, part of a three-tranche issue totaling $9.825bn. In terms of combined deal size, iPhone maker Apple set the record for the largest issuance this year so far, raising $14bn via a six-part deal to beat 7-Eleven’s $10.95bn deal in January. HY deals were led by Carnival’s $3.5bn issuance. 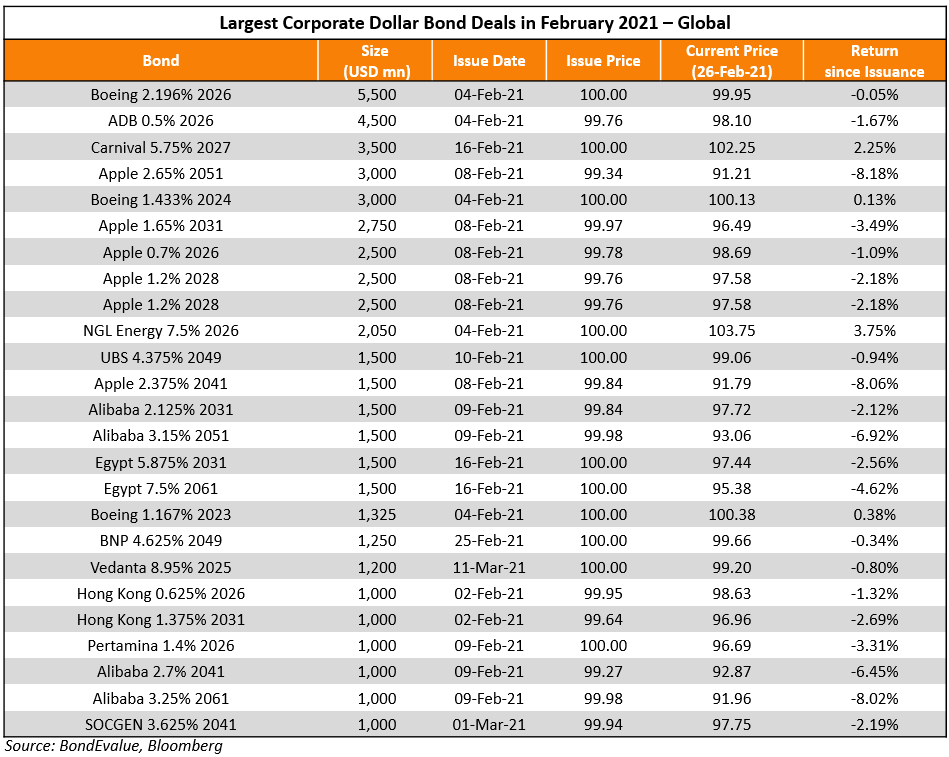 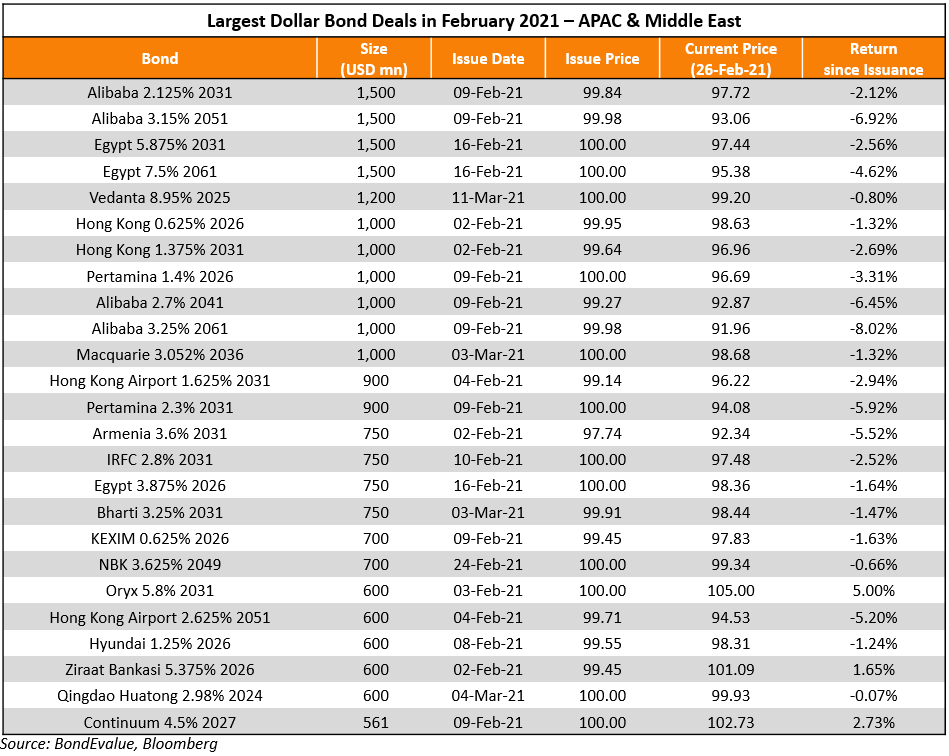 On the gainers list, Canadian oil company Athabasca led the tables with other prominent names on the list like Latin American carrier Latam Airlines, Hertz, Tullow Oil and Vedanta with oil prices rallying last month – Brent and WTI were up 18%. On the losers list, Indonesia garment manufacturer Pan Brothers’ bonds, issued under PB International fell 25% after postponing a new global debt offering and had to get a temporary extension from creditors on a USD loan. The company and its subsidiaries need to repay or refinance $310mn of offshore debt in 2021 and 2022, consisting of the loan and a $171mn bond that will mature in January 2022 as per Bloomberg.

US long-end Treasury rates saw a massive rise in the last two weeks with the 10Y yield rising 35bp during the month and as much as 54bp at the peak while the 30Y yield rose 32bp during the month. That led to long-dated bonds of highly rated issuers like Apple, Amazon, Microsoft, J&J, Temasek etc., that have a relatively larger duration given their longer tenor and lower coupon, making it to the top losers list, down 9%-12%. Taking the case of Singapore state-owned investment company Temasek for example, whose bonds are rated Aaa/AAA. Their 2.5% 2070s carry a thin yield of 2.8% that includes a credit spread, measured by the Z-spread, of 98bp over the benchmark risk-free rate. For such bonds, benchmark risk-free rates make up more of the bond’s yield vs. credit spread. Thus when benchmark rates rise, the yields on high-rated long-dated bonds will too rise leading to a fall in their prices. 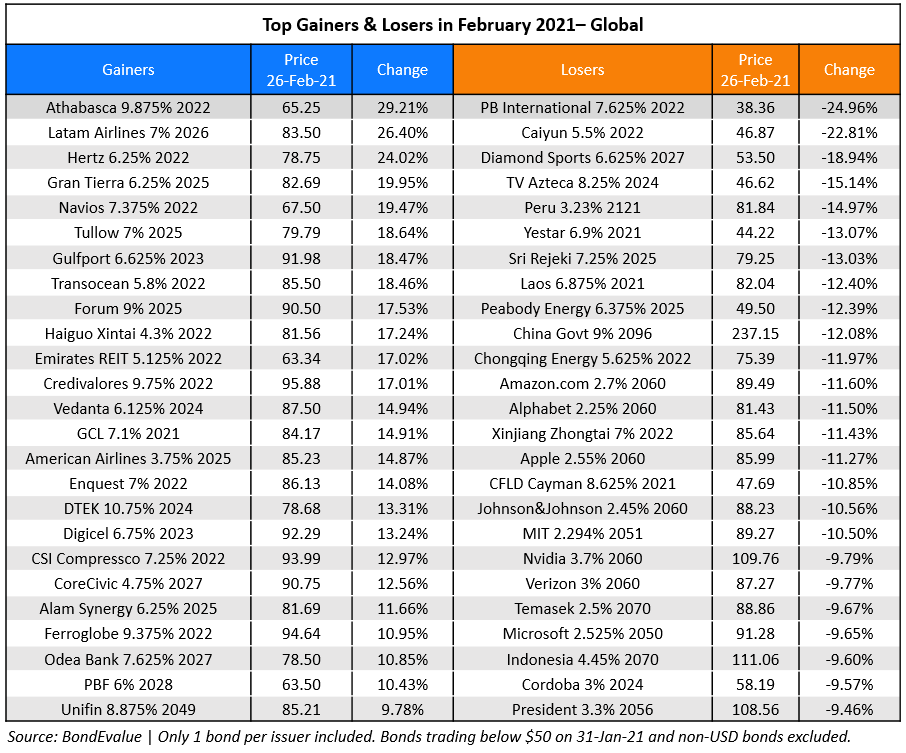 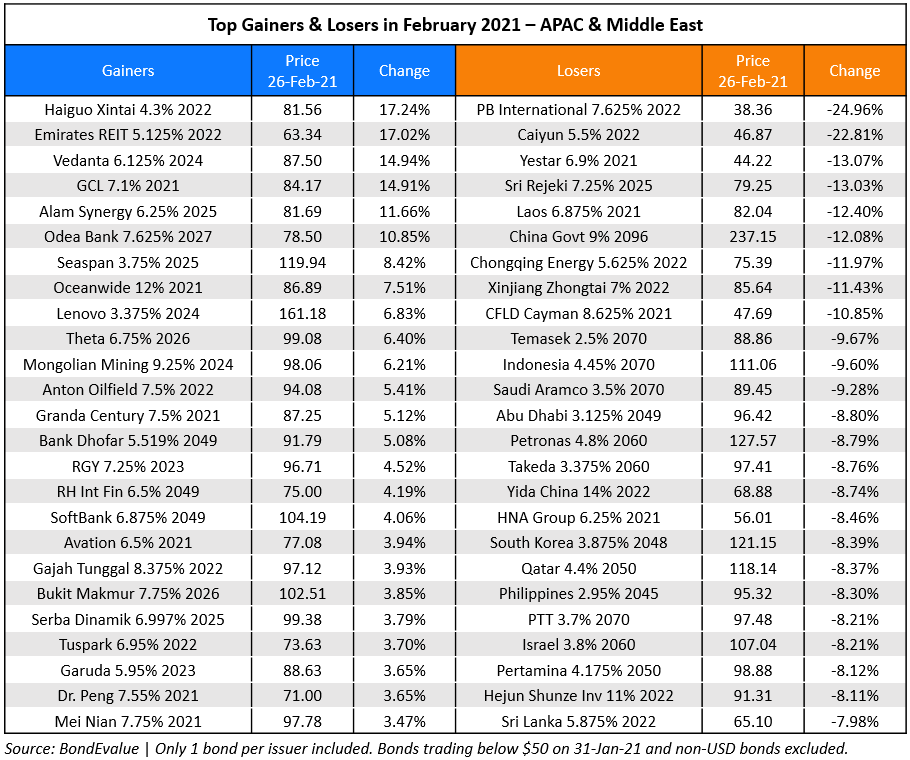