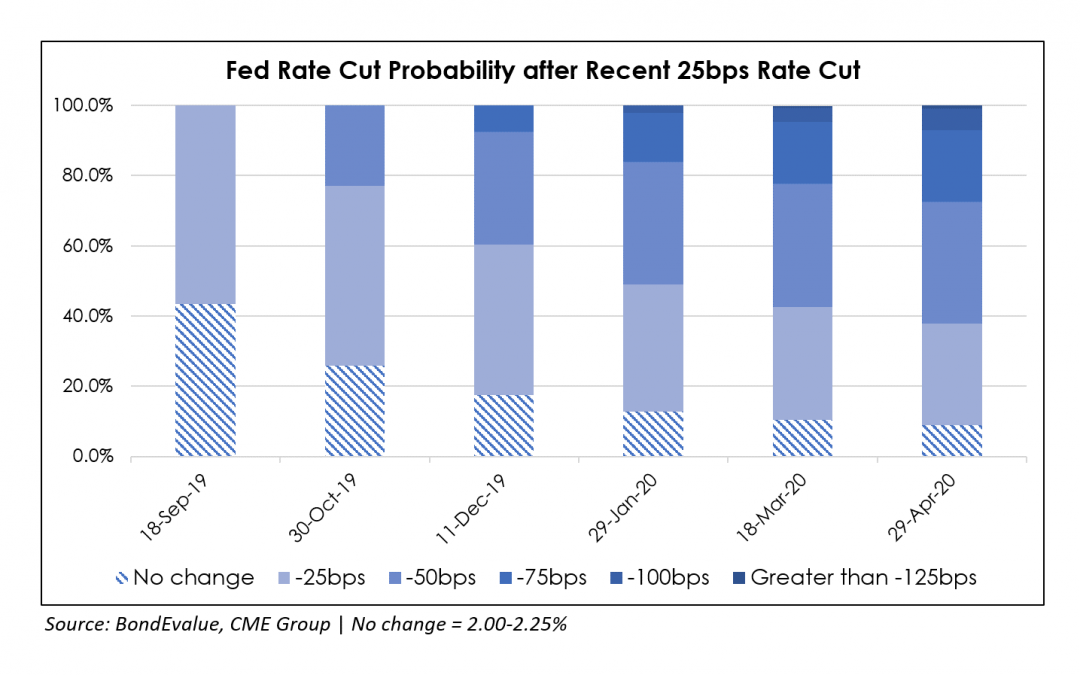 The U.S. Federal Reserve cut interest rates for the first time in more than a decade on Wednesday 31 July, citing “implications of global developments for the economic outlook as well as muted inflation pressures”. Fed Chairman Jerome Powell said the cut was to “insure against downside risks from weak global growth and trade policy uncertainty, to help offset the effects these factors are having on the economy”, indicating that instead of acting for what is currently wrong with the economy, the interest rate move is an insurance policy for what could go wrong in the future.  Succumbing to intense pressure from President Donald Trump, the policymaking Federal Open Market Committee voted to drop the target range for its overnight lending rate to 2-2.25% from 2.25-2.50%, or 25 bps.

Interestingly, 68% of the bonds in the BEV universe fell in price terms when comparing bond prices (as on 1-Aug-19 Asia close) with the day before (31-Jul-19) the Fed announcement. This may be due to the fact that this rate cut was well expected in the weeks leading up to the FOMC meeting and Chairman Powell’s neutral commentary.

This first interest rate decrease since December 2008 was a quick turnaround for the Fed after its 4 rate hikes last year, the last one in as recent as December 2018, and 9 hikes since December 2015.  However, Powell tried to position the reversal as part of a continuum, where central banks shift their policy stance as economic data indicate change.  As such he commented that this rate cut was simply a “midcycle adjustment” and that the FOMC did not see the type of marked economic weakness that would necessitate a longer rate-cutting cycle. Already finding policymaking difficult with conflicting economic signals and constant verbal attacks from politicians, Powell found the Fed’s troubles compounded by communication woes when he had to clarify his comment that the Fed was not on the threshold of a “lengthy cutting cycle”, but rather he did not rule out another interest rate decrease, saying that “I said it’s not the beginning of a long series of rate cuts. I didn’t say it’s just one or anything like that”.

Wednesday’s quarter-point cut was widely expected, with bond yields remaining little changed after the decision.  The Fed left the door open on future cuts, saying it will “act as appropriate to sustain the expansion”, and also announced that it would end its balance sheet reduction programme, which began in October 2017, two months earlier than the planned September 2019.  Notwithstanding, President Trump, who had been expecting a 50bps cut, tweeted that “As usual, Powell has let us down” because what the market wanted to hear from the Fed was that this interest rate cut would be the start of a “lengthy and aggressive rate-cutting cycle which would keep pace with China, the European Union and other countries around the world.”