Fed Chair Expects US GDP to Contract by Up To 30%, Recovery Could Stretch to End of 2021 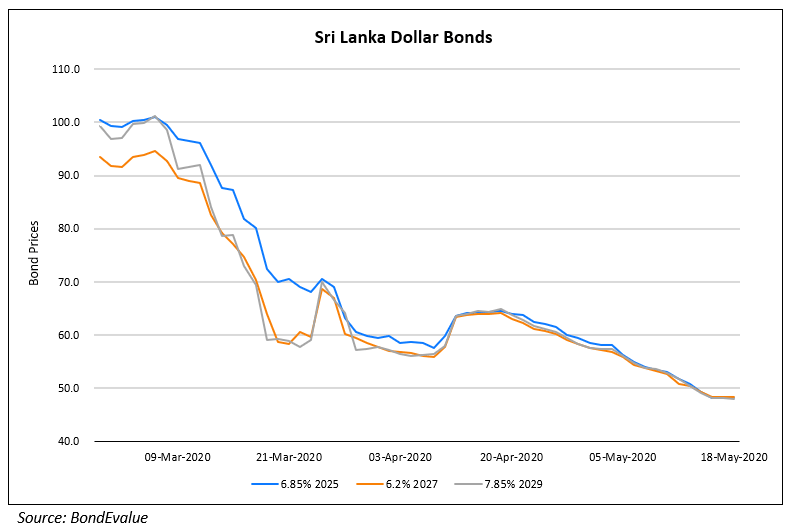 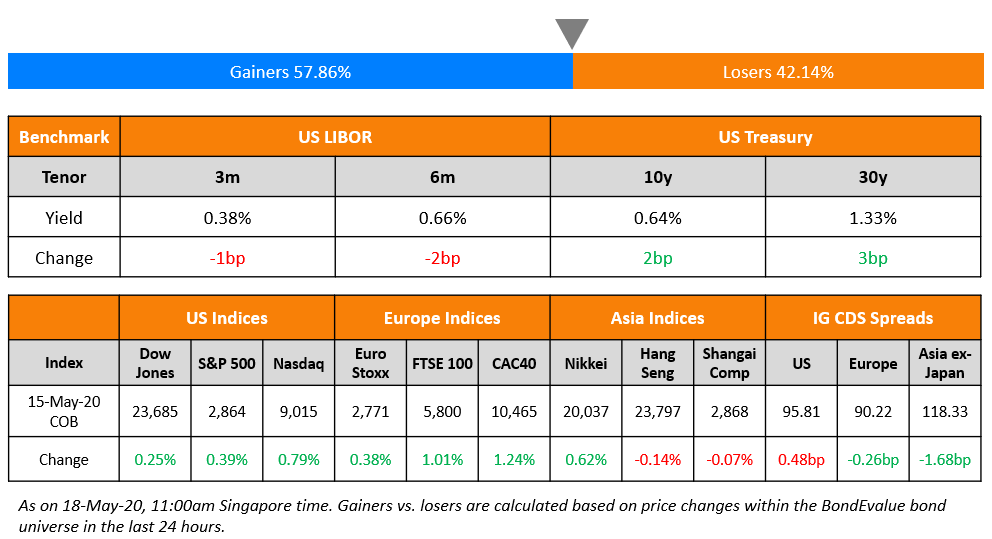 Markets are opening higher this morning after Wall Street ended last week on a positive note. US Fed Chair Jerome Powell’s interview with CBS’s Scott Pelley aired on 60 Minutes on Sunday. We have summarized the interview below. We will have to wait to see how the market digests his words. Economic recovery hopes seem to outweigh another depressing round of data releases and elevated trade tensions between the US and China. The S&P 500 initially dropped 1.3% at one time after the US administration moved to block global chip supplies to Chinese telecom giant Huawei and US retail sales plunged 16.4% in April. The S&P 500 finished 0.39% higher, while the Dow Jones and Nasdaq Composite rose 0.25% and 0.79%, with the longer-term outlook likely dependent upon the prospects for, and scale of, a second wave of infections as US states reopen. European shares ended their worst week since mid-March on the front foot as falling coronavirus death rates and new cases across much of the continent encouraged a further lifting of national restrictions.

Treasuries drifted lower in US trading on Friday, paring their weekly gain, as a surge in oil prices and coronavirus antibody development claims drove gains for stocks. Spreads on Asian dollar bonds tightened for a third week as deals in that market remain scarce. U.S. investment grade issuance eased at the end of last week as general unease with macro factors, highlighted by dreary retail spending and factory output, may have helped put the brakes on primary activity. 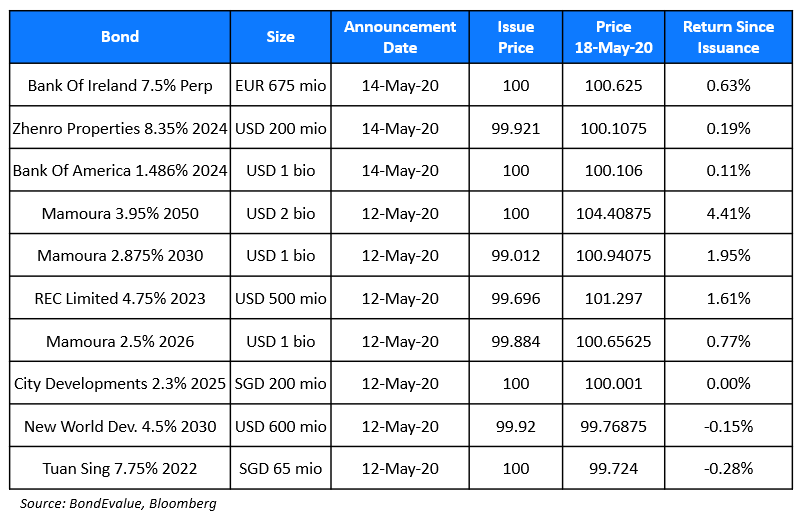 Bank of Ireland issued the first AT1 CoCo bond from Europe in 3 months, following Deutsche Bank’s Tier 2 bond issuance. The bonds, rated Ba2, have trended up slightly on the secondary markets.

UAE state-owned investment company Mamoura Diversified Global Holdings’ bonds, rated AA/Aa2/AA, have outperformed on the secondary markets with its bonds due 2050 up 4.41% from issue price. Its bonds due 2023 and 2030 are up 1.61% and 1.95% respectively.

On what the American people need to be prepared for

In the long run, and even in the medium run, you wouldn’t want to bet against the American economy. This economy will recover. And that means people will go back to work. Unemployment will get back down. We’ll get through this. It may take a while. It may take a period of time. It could stretch through the end of next year. We really don’t know.

We have this situation where 20 million people have lost their jobs. And my sense is that it’s likely that we’ll have a couple more months of net job losses. Then, assuming that the economy does begin to reopen and we do that successfully, you’ll see people going back to work.

On who is getting most hurt in the workforce

The people who’re getting hurt the worst are the most recently hired, the lowest paid people. It’s women to an extraordinary extent. We’re actually releasing a report tomorrow that shows that, of the people who were working in February who were making less than $40,000 per year, almost 40% have lost their jobs in the last month or so. Extraordinary statistic. So that’s who’s really bearing the brunt of this.

On GDP contraction for 2Q

You know, the numbers are going to be very high. And it’s hard to be precise. I wouldn’t want to guess. The public estimates that are out there are reasonable. And, you know, they’ll be very, very high. 20%? Easily. You know,could easily be in the twenties or thirties (-20 to -30%).

On the shape of the recovery

Yeah, there’re letters. People are fascinated by the possibility of different letters. And it’s, again, really hard to say because it depends so much on the path of the virus. I will say that it’s a reasonable assumption that the economy will begin to recover in the second half of the year, that unemployment will move down, that economic activity will pick up.

We’re hearing — my colleagues and I have been talking to a wide range of leaders around the country in the last few weeks. This is nonprofits, educational institutions, medical institutions and businesses of all sizes. Labor leaders and right across the spectrum of American life. And I would say that there’s a growing sense that the recovery may take some time to gain momentum. And that would mean that we will start our recovery and get on that road, and that’ll be a good thing, but that it’ll take some time to pick up steam.

On the health of banks

Q: And for people who wonder whether they should take their money out of the bank and put it in a mattress, you tell them what?
There’s no need to do that. No need at all. The banks have been strong, they’ve been fine. There’s absolutely no need to do that.

So around this table during the last crisis and during the recovery, we looked at negative interest rates. And it’s something we decided not to do. We used other tools instead. And those tools involved forward guidance about the federal funds rate and also lots of asset purchases or quantitative easing as it’s often referred to.

I continue to think, and my colleagues on the Federal Open Market Committee continue to think that negative interest rates is probably not an appropriate or useful policy for us here in the United States.

On the Fed’s stimulus measures

Q: Has the Fed done all it can do?
Well, there’s a lot more we can do. We’ve done what we can as we go. But I will say that we’re not out of ammunition by a long shot. No, there’s really no limit to what we can do with these lending programs that we have. So there’s a lot more we can do to support the economy, and we’re committed to doing everything we can as long as we need to.

Q: What is the best guarantee that you can make to the American people?

Well, a lot of things I can’t guarantee. The one thing I can absolutely guarantee is that the Federal Reserve will be doing everything we can to support the people we serve. And that means providing some relief and stability now. It means supporting the recovery when it comes. And it means doing everything we can to avoid longer term damage to the economy, and longer-term damage to people’s careers and to the many great businesses that make up our economy.

A keepwell agreement is not a guarantee but it requires the onshore entity to ensure that the offshore debt-issuing entity can service its debt. This structure was popular with Chinese issuers in 2012-2013 as keepwells could be incorporated in contracts more quickly and reliably than requesting a guarantee from China’s State Administration of Foreign Exchange (SAFE).

The court supervised debt restructuring of Peking University Founder Group has cast a cloud of doubt over the enforcement of keepwell agreements as the restructuring administrator has classified the contracts as pending recognition. According to Redd, a market data provider, this decision impacts 16% of all outstanding offshore bonds (or $96bn of bonds) issued by Chinese companies. “When the market is good, investors don’t worry. But when the market is stressed, they take another look at these structures,” said Soo Cheon Lee, chief investment officer at credit-focused banking and asset management group SC Lowy. Peking University’s failure to repay an onshore bond in February led to a cross-default on its $3bn offshore bonds. Its offshore bonds issued under Dawn Victor Ltd., Kunzhi Ltd. and Nuoxi Capital Ltd. with maturities in 2020 through 2023 are all trading at 20-23 cents on the dollar on the secondary markets.

Sri Lanka’s dollar bonds have been the worst-performing sovereign notes in Asia this year. But BNP Paribas Asset Management and Union Investment Privatfonds GmbH say it might now be time to buy. The nation is in talks with the International Monetary Fund and the Asian Development Bank for funds. It also expects about $800mn from China and a $400mn swap line from India to bolster reserves. Risks, of course, still abound. The South Asian nation was downgraded deeper into junk territory in April by Fitch Ratings, which said the pandemic will worsen its already-rising debt sustainability challenges. Sri Lanka in March joined emerging-market nations whose debt is in distressed territory. Its dollar bonds have lost about 46% this year, more than any other country in Asia. “We don’t expect them to default, do see willingness to pay and think that the current spread level is fair enough to re-engage at least without being too bullish or overly optimistic,” said Christian Wildmann, head of emerging-market debt for the firm in Frankfurt. 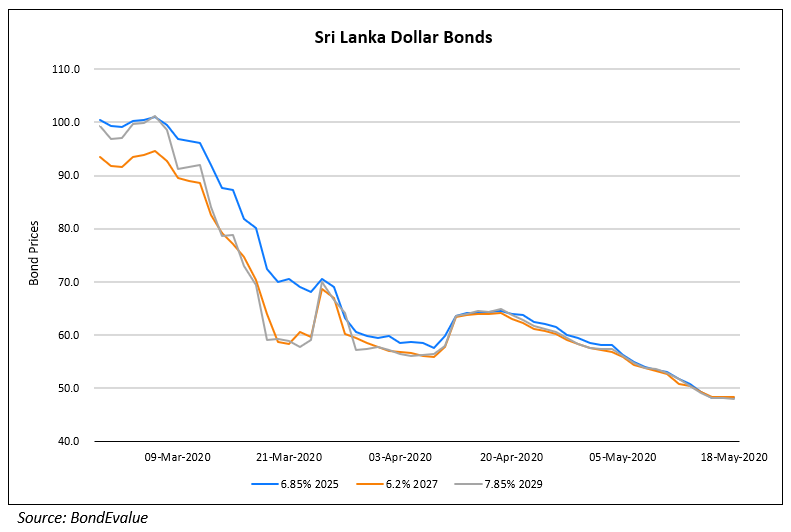 The market for Covid-19 relief bonds is on the rise. Governments and corporates are resorting to raising funds through measures such as bond issuance. The coronavirus bond market has already reached $65bn and could reach $100bn by the year end. The month of April itself saw a total of $32bn worth of “social” and “sustainable” bonds being issued. The phenomenal rise in coronavirus bonds this year seems to have come at the cost of green bonds, which had been in vogue last year. Even though the coronavirus bonds constitute only a small part of the global bond market, their growth remains noteworthy. According to Dealogic, the total amount raised via all types of bonds has been over $2tn since February end.

On Demand For US Treasury – Neil Sutherland, Schroders

There’s been no sign of a spike in borrowing costs: Bleak economic data have weighed on yields even as the Federal Reserve trims purchases. And preliminary trading in the 20-year implies a yield of about 1.12% — historically low for a long bond, but appealing enough relative to 0.64% on the 10-year, says Neil Sutherland at Schroders. “The issuance numbers that we’re seeing from the Treasury are truly eye-watering,” the money manager said. “But there is a gap for that maturity in the market, and I think there will be decent enough demand.”..”You get paid nothing in cash, so if you can extend out and pick up 100 basis points to extend out the curve, in an environment of negative growth, deflationary impulses, and meager returns elsewhere, people will reach for yield,” Sutherland said.

“We are positive on the credit, and the willingness to pay remains strong,” said Jean-Charles Sambor, head of emerging-markets fixed income at BNP Paribas Asset Management in London. “The Covid-19 situation had much more macro impact on Sri Lanka than other Asia frontier markets, given its significant refinancing needs and relatively unfavorable debt trajectory.” “Sri Lanka has demonstrated in the past that it is a country that honors its debt commitments, even through tough times, but these are exceptional times,” said Thu Ha Chow, Singapore-based fund manager for Asia credit strategies at Loomis.

“If you think about high-yield, where there’s a lot of pain still to come, or emerging-market debt where there is still a lot of currency and potential balance of payments problems to come,” those are less appealing areas, Schowitz, said on Bloomberg TV. “We would stay away from the riskier end, but the safer end of investment-grade credit actually looks like a pretty good trade here.” 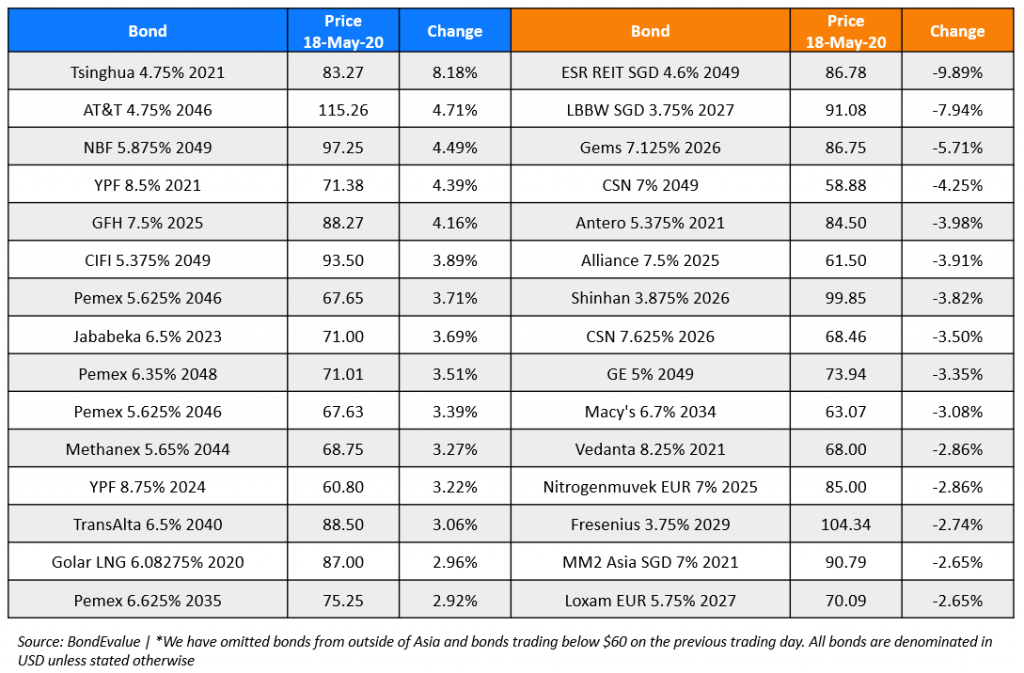