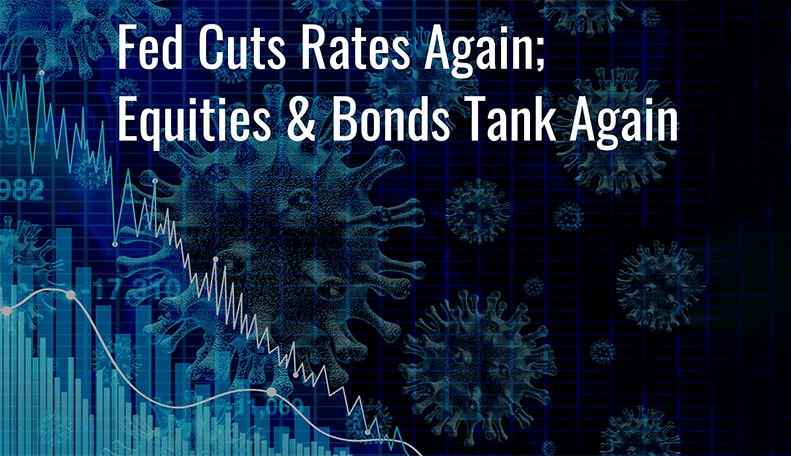 Asian Markets woke up to the below Fed announcements:
US equity futures indices have hit limit down 5% this morning and have halted trading. Hang Seng Index is down 2.6%. Shanghai Composite is down 0.75%. Jakarta Composite is down 2.5%. TOPIX is up 0.5%. On Friday, China’s central bank cut reserve requirement ratio (RRR) by 50-100 basis points (bps) unleashing a wall of liquidity. It will release 550 billion yuan into the banking system. This liquidity adds to the 800 billion and 900 billion pile that was released during the last two RRR cuts in January 2020 and September 2019. It was preceded by the Reserve Bank of Australia’s decision to add A$8.8 billion into short-term bank funding – more than double the usual daily amount and an announcement by the Bank of Korea it could make an emergency rate cut to support the economy. Norway’s central bank delivered a half-point cut to its main interest rate and Sweden’s central bank is lending more money to its banks to offset the liquidity squeeze. The collapse in oil prices and fiscal measures have put downward pressure on inflationary expectations, making it a lot easier for central banks to deliver interest rate cuts.

Barclays analysts expect rate cuts in Indonesia, the Philippines and Taiwan at their central bank meetings this week. It also forecasts further rate cuts in India, possibly before the next scheduled meeting.

During a press conference last Thursday, Ms Lagarde said it was not the ECB’s role to ‘close the spread’ in sovereign debt markets – referring to the gap between Italian and German bond yields. These remarks stirred fears the ECB was retreating from being a lender of last resort to Italy as concerns intensified about the economic impact of the coronavirus. Economists predict Italy is heading into a deep recession with the extra spending to inflate the already high debt levels. The ECB last week announced plans for Euro 120 billion of extra asset purchases on top of its Euro 20 billion a month existing program. Italy’s 3% 2029 bond yield moved higher from 1.05% to 1.80% last week.

Cash prices in some of the most actively traded bond funds are now at steep discounts to the value of their underlying assets. The prices of the largest debt ETFs are trading at 4-5% below their NAV. The havoc is reigniting arguments around fixed-income ETFs, which trade much more liquidly than the assets they hold.  Critics have long warned the products were a pressure point that would crack in volatile times, as investors rush to redeem their holdings during a sell-off. But just as many arguments exist that ETFs give participants in less-active markets better prices in times of stress — and an exit route. If the authorized participants felt that they could buy an ETF at a 15% discount and then turn around and sell those components to the cash market 15% higher, they would,” said David Schawel, chief investment officer at Family Management Corp. “But clearly they feel like there’s not enough activity in the cash market, therefore they can’t do that”. The rapid plunge in prices creates a “unique” entry point for funds trading at a discount, according to Schawel, who pointed to investment-grade corporate bond ETFs as an example. “If these are assets that you’re wanting to own anyway, then I think it’s a very unique opportunity to buy things at an even greater discount”. India’s AT1 Market is Diverging

The Reserve Bank of India’s (RBI) decision to permanently write down Yes Bank Ltd.’s additional Tier-1 (AT1) instruments contrasts sharply with the approach taken for similar instruments issued by the country’s public-sector banks. The Indian government is working with the State Bank of India (SBI) to inject capital into Yes Bank, a troubled private-sector bank with 1.8% of the country’s bank deposits (as of March 31, 2019).

SBI will infuse capital into the bank, acquiring up to a 49% stake. The draft resolution terms of the bailout scheme requires Yes Bank to write down about Indian rupee (INR) 87 billion (US$1.2 billion) of outstanding AT1s. AT1 investors have filed a petition against the RBI, Yes Bank and the government. Media reports indicate that parties are exploring an out-of-court settlement, with AT1 investors clamoring for conversion of AT1s to equity.

The event has rattled India’s bank hybrid markets–it’s been a hot topic among local investors in the past week. A complete write-down would likely raise the risk premium that investors price into Indian hybrids. This would create losses for asset managers and raise capital costs for issuers. S&P Global Ratings shares its perspective on AT1s in India and how it compares with other Asian markets.

Foreign investors are arriving by hordes to China and this time they are headed towards the bond markets as global market tremors rock sentiment and the Chinese central bank unleashed a wall of money to combat growth pressures. China has been slowly opening its doors to foreigners whose ownership in bond markets has leapt in the past two years as the different exposure avenues have emerged – the Qualified Foreign Institutional Investor (QFII) and RMB QFII (RQFII) schemes, direct investment in China’s interbank bond market (CIBM Direct) and Bond Connect.

Last year, China’s onshore bond market overtook Japan to become the second-largest in the world in terms of bonds outstanding, behind the United States. Yet at xx, foreigners’ holdings are still tiny when compared with developed markets such as Japan (12.1%) and the US (28%) as well as such emerging markets as Indonesia (39%) and Malaysia (24%). That is starting to change. Data from Bondconnect showed foreigners bought 75.5 billion yuan off China’s government and quasi-government bonds in February using the various channels that have been made available. This is five times the amount they bought in the previous month.

“China flow is increasing as it is in a stabilising stage of the covid-19 recovery and that is allowing investors to buy the recovery, whereas the developed markets are still at early stage,” said Paul Sandhu, Head of Multi-Assets Quant Solutions & Client Advisory, APAC at BNP Paribas Asset Management.

Chinese ride-hailing giant Didi Chuxing hit a snag as it tried to route money from a new Latin American market to Asia as the coronavirus pandemic disrupted traditional ways of banking. Didi, which is backed by Japan’s SoftBank, wanted to move the money to its treasury hub for international operations in Singapore. To do this, Didi needed to open a bank account quickly in the Lion City for the proceeds from that market to land in and from where it could pay drivers. Traditionally, opening a corporate bank account needs face-to-face meetings and documents couriered to a bank branch.

That is where the problems started. Staff at Beijing-headquartered Didi who needed to sign and stamp the paperwork with chops were working from home mid-February to limit the chance of getting infected with Covid-19. Didi, valued at around US$51.64 billion last year, faced a delay in opening a new market, derailing its business roll-out across the continent and missing out on revenue at a time when the coronavirus has hit demand in its home market. Didi operates in Brazil, Mexico, Columbia, Chile, Costa Rica and entered Panama on March 10.