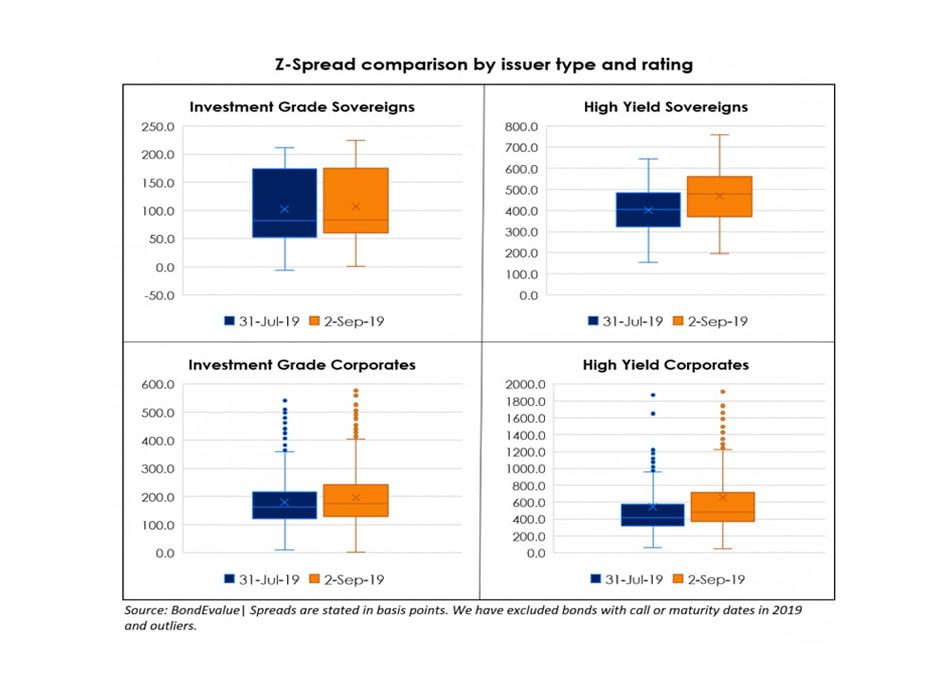 Bond investors continued to move towards safety and quality amid negative sentiment world over. US President Trump upped the ante on the trade war with additional tariffs on US$ 300 billion in Chinese imports. Protests in Hong Kong continued to disrupt the peace and stability of the country; trade tensions between South Korea and Japan escalated with South Korea removing Japan from its preferred trade list; US-Iran relations soured; UK Prime Minister Boris Johnson’s relentless approach to leave the EU by October 31st continues to rattle the UK parliament.

This paved the way for greater risk-off sentiments in the market, which sent US Treasury yields lower in August. 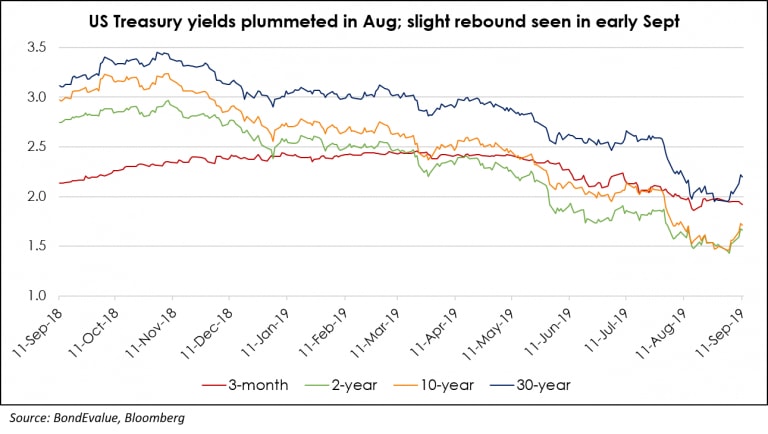 However, Treasury yields saw a rebound in early September as investors grew wary of the stimulus measures to be announced by the ECB in its meeting on 12th September. As the Fed is expected to cut rates by 25 basis points in next week’s FOMC meeting, the question that begets most investors is – how low will the new low be? 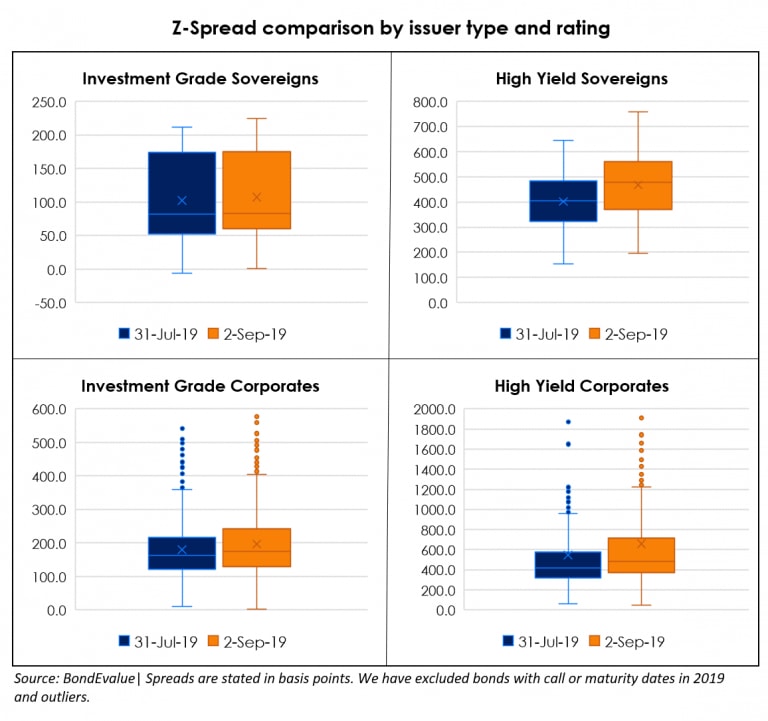 Widening credit spreads indicate an increase in yields and a decrease in prices, given the inverse relationship between price and yield. The widening spreads for investment grade sovereigns and corporates can largely be explained by the fall in Treasury yields. However, the widening spreads seen in high yield sovereigns and corporates is an indication of risk aversion among investors as capital flows out of lower-rated bonds.

This is in line with the theme of flight to safety as investors are seeking shelter in quality and relatively safe (aka investment grade) names in this uncertain macro-environment. The theme is also justified by the strong rally in higher-rated emerging market sovereigns (see Top Gainers).

Asia ex-Japan G3 currency new bond issuance reached a 3-year record low in August with total issuance sitting only at US$ 11.7 billion, 67% lower than the previous month’s issuance volume. August has traditionally been typified a s a month of poor market liquidity in light of investors being away on vacation. However, September saw a record first week with more than US$ 140 billion of new corporate bonds issued, marking the biggest weekly volume to hit global markets. Asia ex-Japan issuance volume was US$11.9 billion in the first week, surpassing the volume in the entire month of August. 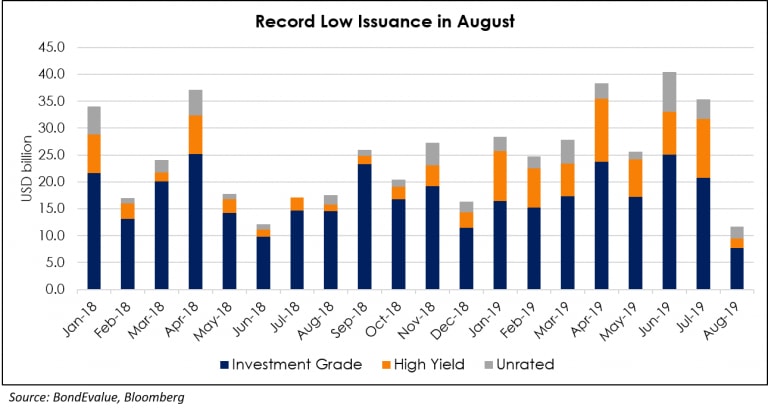 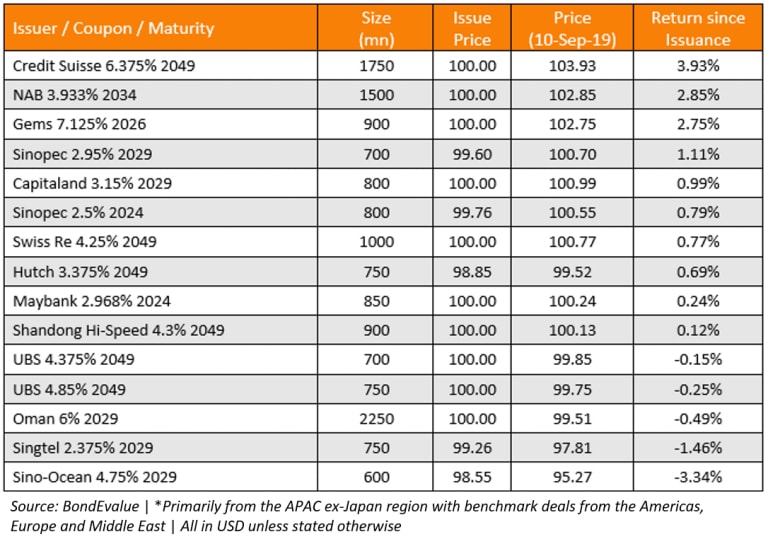 State-owned China Petrochemical Corporation received orders worth US$ 4.3 billion for its three-tranche deal totaling US$ 2 billion issued by Sinopec Group Overseas Development. The strong A+ rating of the issuer explains the strong demand and oversubscription for the bonds. 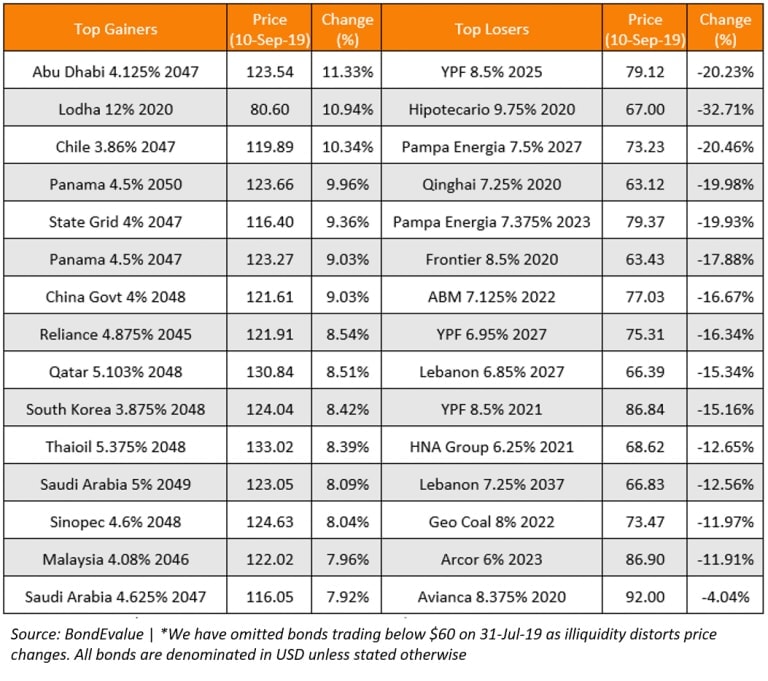 Major oil companies in Argentina took a big hit in their bond prices as political instability and the announcement to freeze domestic diesel, gasoline and oil prices for a 90-day period, looks to have a negative impact on these companies. Corporates such as Pampa Energia were also not sparred as bond prices were sent tumbling.

Qinghai Provincial Investment Group Co. missed its coupon payment on its dollar issue yet again leading to another tumble on its bond prices, a sign that debt restructuring efforts has yet to improve finances in the company.

The debt laden HNA Group continues to service its off-shore dollar bond with the aid of China’s provincial government. However, bond prices of its 2021 US dollar denominated bonds continue to slide. The company looks to sell off more of its assets to meet their burgeoning debt obligations.

This widening in the emerging market space is further exacerbated by concentrated risk emerging from countries like Argentina, struggling to avoid its 9th sovereign debt default. With the increasing protectionist stance of the government, corporates within Argentina are adversely affected too.