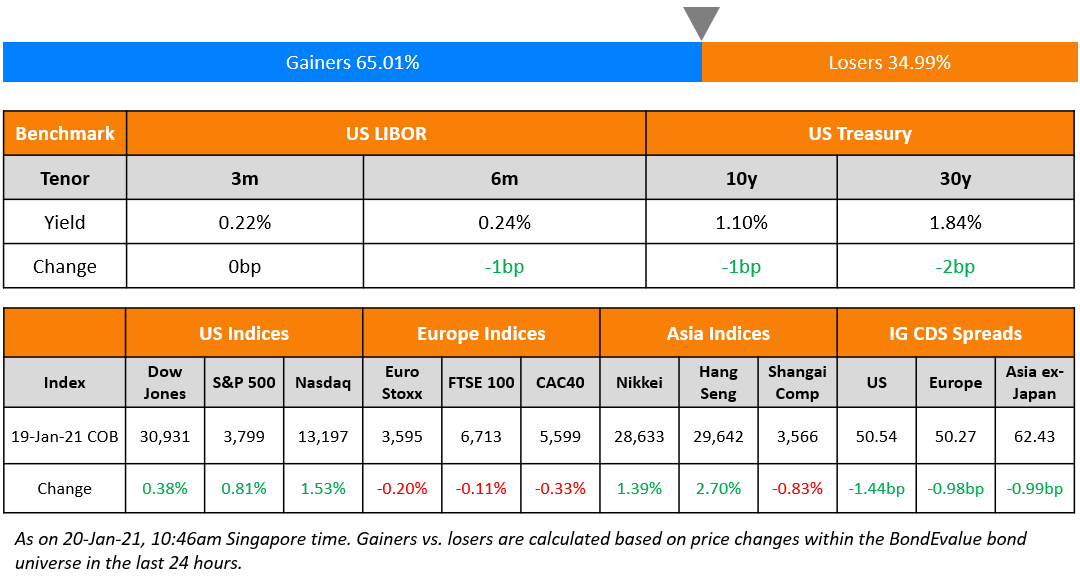 US equities ended higher with the S&P and Nasdaq up 0.8% and 1.5% respectively. US 10Y Treasury yields moved 1bp lower. Janet Yellen, former Fed Chair and Biden’s pick for the Treasury Secy. said that lawmakers should ‘act big’ on the next relief package while also noting that some of the tax cuts for corporations in 2017 should be repealed, during a Senate confirmation testimony. German ZEW sentiment picked up strongly to 61.8 from 55 the previous month as export expectations rose. Italian 10Y BTP yields fell 4bp with the coalition government of PM Conte winning the Senate’s confidence vote. FTSE, DAX and CAC fell 0.1%, 0.2% and 0.3%. US IG CDS spreads were 1.4bp tighter and HY was 6bp tighter. EU main and crossover CDS spreads also tightened 1bp and 1.8bp respectively. Asia ex-Japan CDS spreads tightened 1bp and Asian equities have opened higher ~0.4% today.

Save 25% on All Annual Plans 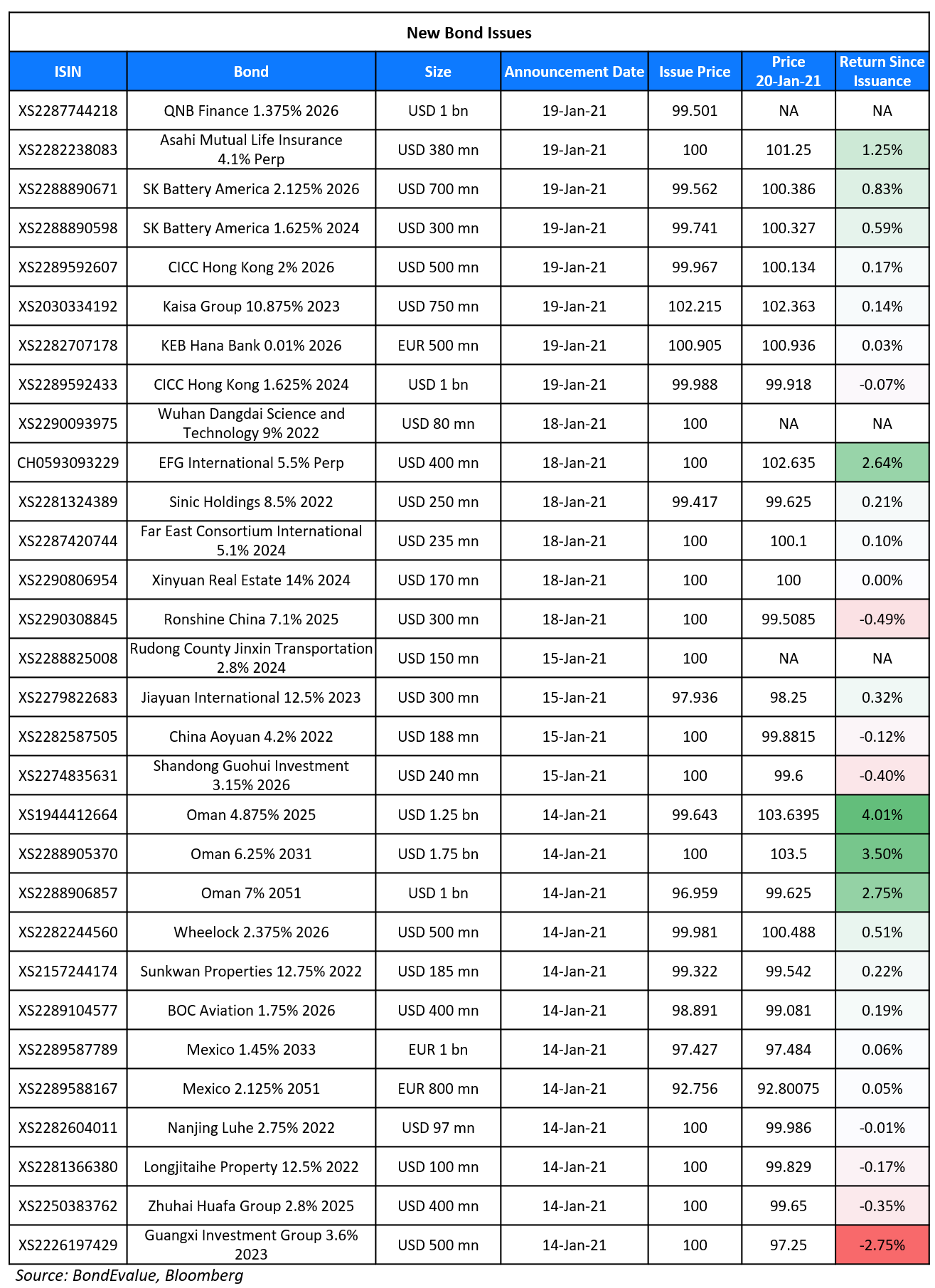 Wells Fargo raised $3.51bn via a perpetual non-call 5Y (PerpNC5) preferred at a yield of 3.9%, 47.5bp inside initial guidance of 4.375% area. The perps have expected ratings of Baa2/BB+/BBB and are SEC-registered. Proceeds will be used for general corporate purposes, including, but not limited to, the redemption of outstanding preferred stock and related depositary shares. The perps can be redeemed in whole or in part on any dividend payment date on/after March 15, 2026 at par or in whole, but not in part, at any time within 90 days after the occurrence of a regulatory capital event at par. The coupon is fixed until March 15, 2026 and if not redeemed, resets on March 15, 2026 and every fifth year thereafter at the 5-year constant maturity treasury (CMT) rate plus the initial credit spread.

Asahi Mutual Life Insurance raised $380mn via a PerpNC10 at a yield of 4.1%, 50bp inside initial guidance of 4.6% area. The bonds have expected ratings of BBB- and received solid orders of over $6.25bn, 16.5x issue size despite the massive 50bp tightening. Asia took 75% and EMEA 25%. Asset managers/fund managers booked 85%, private banks and banks 13%, and insurers 2%. The coupon is fixed until January 2031 and resets every five years thereafter to the initial spread of 399bp over 5Y US Treasuries plus a step-up of 100bp. Proceeds will be used for general corporate purposes and/or towards repaying its $350m 7.25% perps callable in January 2022.

BOC Aviation raised $100mn via a tap of their 1.75% 2026s at a yield of 1.968%, or T+150bp unchanged from initial guidance. The bonds have expected ratings of A-/A-, on par with the issuer. Proceeds will be used for new capital expenditure, general corporate purposes and/or the refinancing of borrowings. The bonds were priced at a razor thin new issue premium of 2.8bp over their initially issued 2026s, currently yielding 1.94%.

KEB Hana raised €500mn ($604mn) via social covered bond at a yield of -0.17%, 6bp inside initial guidance of Mid-Swaps + 33bp. The bonds were rated AAA/AAA and received orders over €1.85bn, 3.7x issue size. This is the first covered bond issue from a Korean lender in offshore markets and will be issued under the Korean Covered Bond Act. Proceeds will be used to finance projects in social eligible categories in accordance with the issuer’s sustainable financing framework, including those to alleviate the adverse effects of the Covid-19 pandemic.

Tapering refers to the unwinding of a quantitative easing program by central banks. Tapering involves a reduction in bond purchases by central banks towards zero purchases over time. According to a Deutsche Bank survey, “71% of respondents do not believe that the Fed will taper before year-end, which is in line with what Fed governors had been saying forcefully by the end of last week, but a quarter of readers may think that economic growth/markets could force their hand.”

“The world has changed,” Yellen said with regard to interest rates. “In a very low interest-rate environment like we’re in, what we’re seeing is that even though the amount of debt relative to the economy has gone up, the interest burden hasn’t.” “The most important thing we can do is to defeat the pandemic, to provide relief to American people and to make long-term investments that make the economy grow and benefit future generations,” said Yellen. Failure to address the crisis now “would likely leave us in a worse place fiscally,” she said. “I believe the future is likely to bring low-interest rates for a long time.”

“Although we do have relatively low rates today and knowing that that could change, we shouldn’t get too comfortable,” said Portman. He described the debt-to-gross domestic product ratio as “frightening.”

“The argument is that interest rates are low. It’s like free money. It’s not. It has to be paid back.” When rates “normalize,” financing costs will climb, he said.

Mickey Levy, chief economist for the US and Asia at Berenberg Capital Markets

“This administration is going to put the highest priority on the near-term, going all out to stimulate the economy back to where it was — almost regardless of its longer-run implications,” said Levy

“There is an advantage to funding the debt, especially when interest rates are very low, by issuing long-term debt, and I would be very pleased to look at this issue and examine what the market would be like for bonds of this maturity,”

“There’s been a bit of a reaction in the long end following Yellen’s comments, but I think a 50-year bond is still a long shot,” said Rajappa. “The Treasury has delved into this topic several times before and concluded that the demand dynamics do not support ultra-long bond issuance,” Rajappa said. “The Treasury should be able to fund itself with the current coupon schedule for the remainder of the year, so I do not see an urgency for a 50-year bond.”

According to a European Central Bank survey.

“The tightening was driven mainly by banks’ heightened risk perceptions, reflecting uncertainty around the economic recovery and concerns about borrowers’ creditworthiness in the context of renewed coronavirus-related restrictions,” the ECB said.

“At this stage of the recovery, a credit crunch would not help,” said Schumacher. “But that is not what we are seeing as banks are not pulling credit lines and government support remains sizeable through loan guarantees.”

“You can imagine a battle going on within banks between the [chief executive] who wants to keep lending and the chief risk officer who is more worried about default risks,” he said.

On US Treasuries slipping after Yellen says tax cuts should be repealed – Stan Shipley, macro research analyst at Evercore ISI

“Generally people expect inflation to be on the upswing here. You see that in inflation expectations, which are trending higher,” said Shipley. “There will be a push by the Biden administration to try to get wage gains to accelerate too,” he said.

“Indices are tyrannical in their influence on markets. They should include everything,” said Dehn, who suggested the paucity of coverage was akin to a “market failure” in index provision. Sudden outflows “have a serious macroeconomic impact on EM countries”, Mr Dehn said. “Emerging markets are little ships floating on a sea of risk. If the global weather environment is too bad, then you can sink the ship.”

He argued that the index was “specifically designed to capture securities that are Euroclearable”. “That means that global investors have pretty good access to these instruments without having to set up operations on the ground in each and every market,” said Mr Galdi. “We have seen some pretty decent interest in the Chinese domestic bond market,” Mr Galdi added. “There are some other Asian markets that we are contemplating adding to our index coverage. “As yet [though] there hasn’t been enough demand for us to build a global, all-encompassing local index. I do see that as changing over time but that is happening slowly and selectively.”

In a report by Roland Berger analysts

“In the medium to long term, the participation of offshore institutional investors in China’s bond market will increase year by year, and will bring overseas investment philosophy and model to Chinese institutions,” the analysts said.

“China starts a year with a well-functioning economy. There is some uncertainty, but it’s uncertainty with Chinese characteristics, which means it’s within a certain range of control,” said Depoux 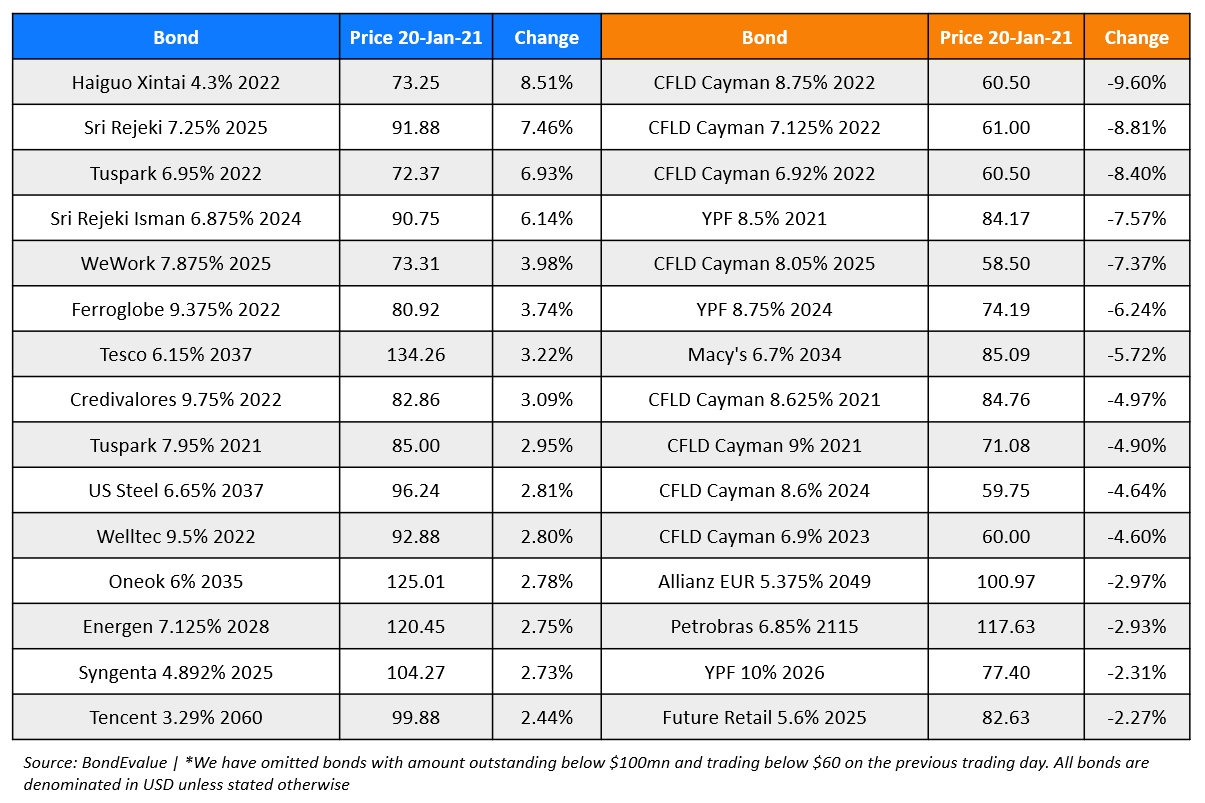