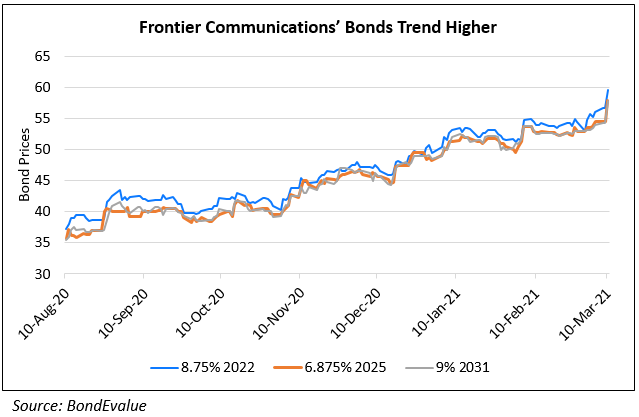 American distressed telecom company Frontier Communication reported quarterly earnings on Tuesday. They reported net losses of $50mn in Q4 vs. a loss of $162mn in the same quarter in 2019. Revenues in the quarter were at $1.69bn, down 13% YoY. They said that the net losses include $136mn of reorganization items related to balance sheet restructuring and $72mn of debt extinguishment costs related to refinancing. The company reported a capex spend of $356mn in the quarter and $1.18bn for the full year 2020. The company had filed for bankruptcy in April last year after the pandemic. Frontier said that they refinanced $4.95bn of first and second lien debt in the quarter and have cleared all funded maturities until 2027. Further, they have increased liquidity by $165mn of additional revolving credit facility commitment (RCF) with total RCF at $625mn. Frontier executives said that the company expects to emerge from its Chapter 11 bankruptcy in the next few weeks and is just awaiting one final approval from a state public utilities commission. Most of Frontier’s dollar bonds were up over 3 points or over 5%-6%.