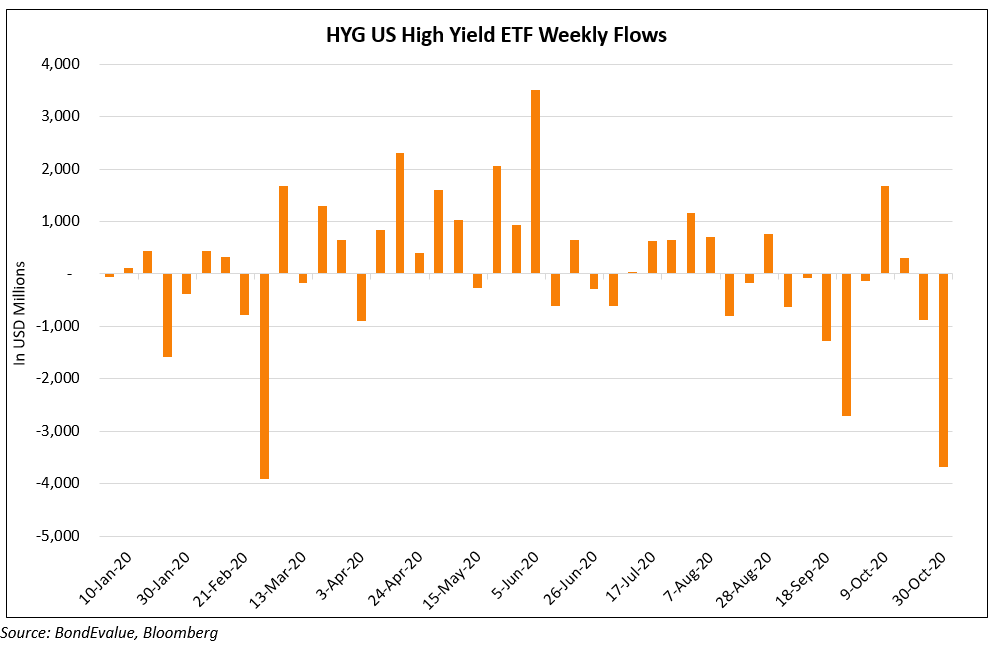 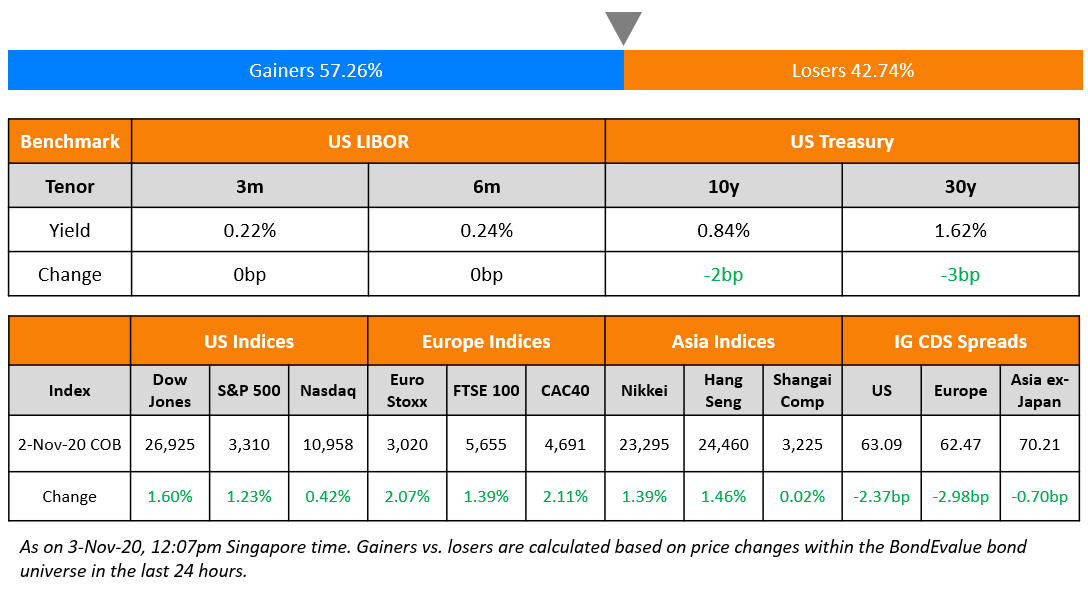 S&P recovered some of its previous week’s losses ending 1.2% higher led by the energy, industrials and utilities sectors that were up over ~3%. Nasdaq was marginally higher by 0.4%. US10Y Treasury yields are off their highs and eased 3bp to 0.84% as the US Treasury cut Q4 borrowing estimates to $617bn due to higher cash balances and lower than expected expenditures. Today’s US election remains one of the most awaited days of the year and polls show that Biden may win the race with a possibility of a ‘blue sweep’. Due to the pandemic, the expected date for the final results of the election are still not clear. US IG CDS spreads narrowed ~2bp and HY CDS spreads were also tighter 3bp echoing the stock market sentiment. European equities were also on a risk-on tone with the DAX, CAC and FTSE-MIB up over 2%. European main and crossover CDS spreads were tighter 3bp and 14bp respectively. Asian equities are up ~1.5% following western equities while Asia ex Japan IG CDS spreads are tighter ~0.7bp. Primary markets remain muted with no new deals on Monday and just one dollar bond launched today. 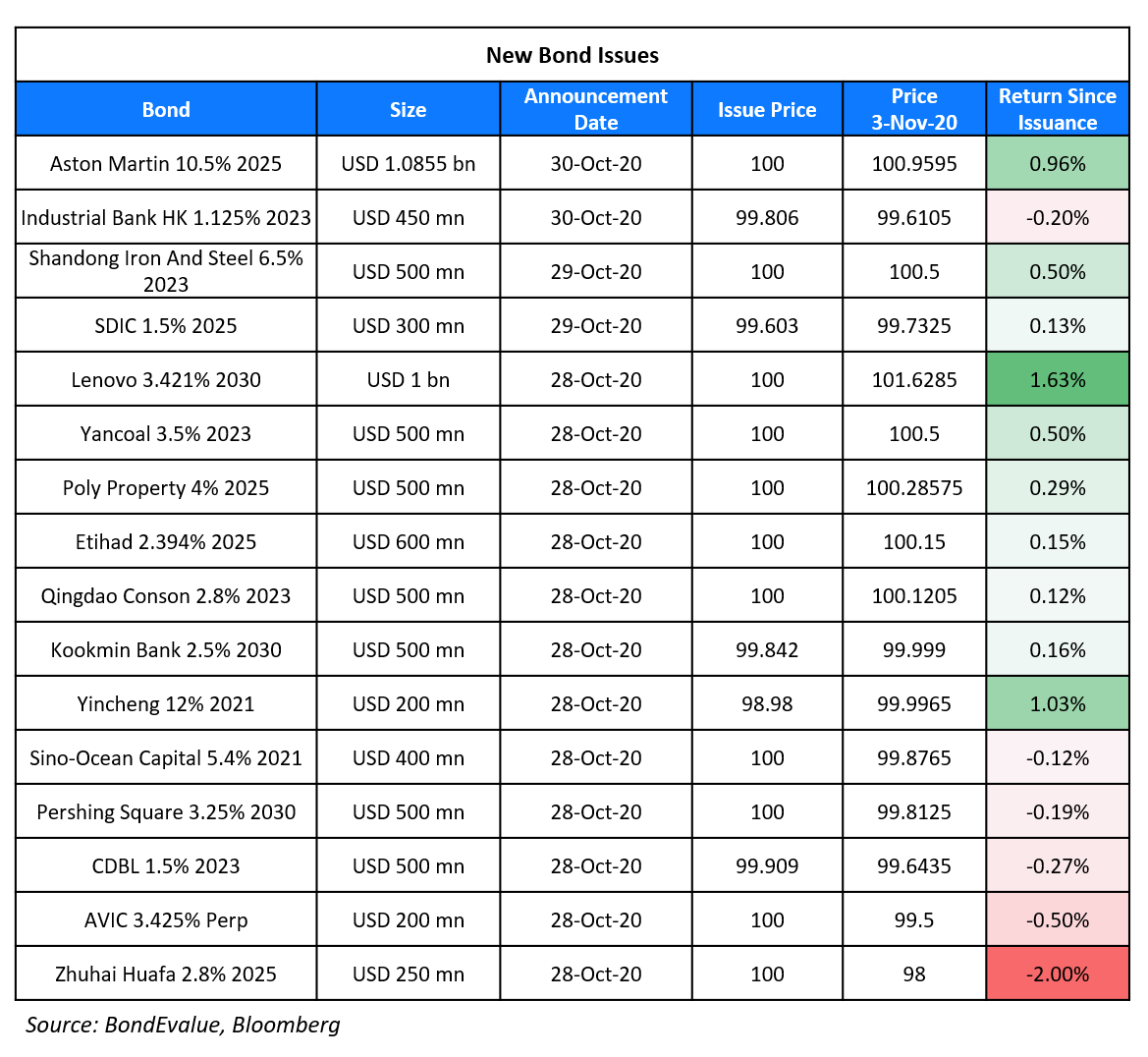 Evergrande, the heavily-indebted Chinese property developer raised $2.2bn via a sale of its 41% equity stake in Xinjiang Guanghui Industry Investment Group to Shenergy Group. Evergrande said that the stake sale would enable the company to “focus more on its core business”. The developer sits on over $120bn of debt and cash reserves lower than their short-term debt. In March, the company pledged to reduce debt by $22bn per year through 2022. The cash from the stake sale could see its short-term debt to cash reserves ratio reduce from 1.06x to ~0.95x, which would give it some comfort on the three red-lines drawn by regulators. The regulation, which is going to be enforced, requires short-term debt to cash reserves to be capped at 1x. Nomura’s trading desk said the stake sale is “undoubtedly positive”, however, to what extent the asset sale can “restore market confidence and restart its financing channels remains a concern”. Both Evergrande shares and bonds rallied on the news – shares up ~2% and bonds up ~1% across the curve. Their 6.25% dollar bonds due 2021 rose 1.12 points to 94.645 while their 8.25% bonds due 2022 rose 1.5 points to 85.75 after the announcement

The iShares iBoxx Dollar High Yield ETF (HYG), which tracks high yield bonds, saw investors pull $3.67bn in the prior week, the largest outflow since February. With Covid cases increasing across US and Europe, increasing probabilities of renewed lockdowns and presidential elections this week, it appears that investors are raising cash on fears of widening spreads. Short interest on HYG, a rough indicator of bearish bets, is about 18% of shares outstanding according to Bloomberg and IHS Markit. “That’s some of what you were seeing, perhaps pre-election de-risking in combination with a little cloudier view of what the near-term pace of the economic recovery is going to look like”, said the chief investment strategist at asset manager Nuveen. Other high yield ETFs like the HYLB and JNK also saw similar moves – the former seeing the largest withdrawals on record and the latter facing its third straight week of outflows. 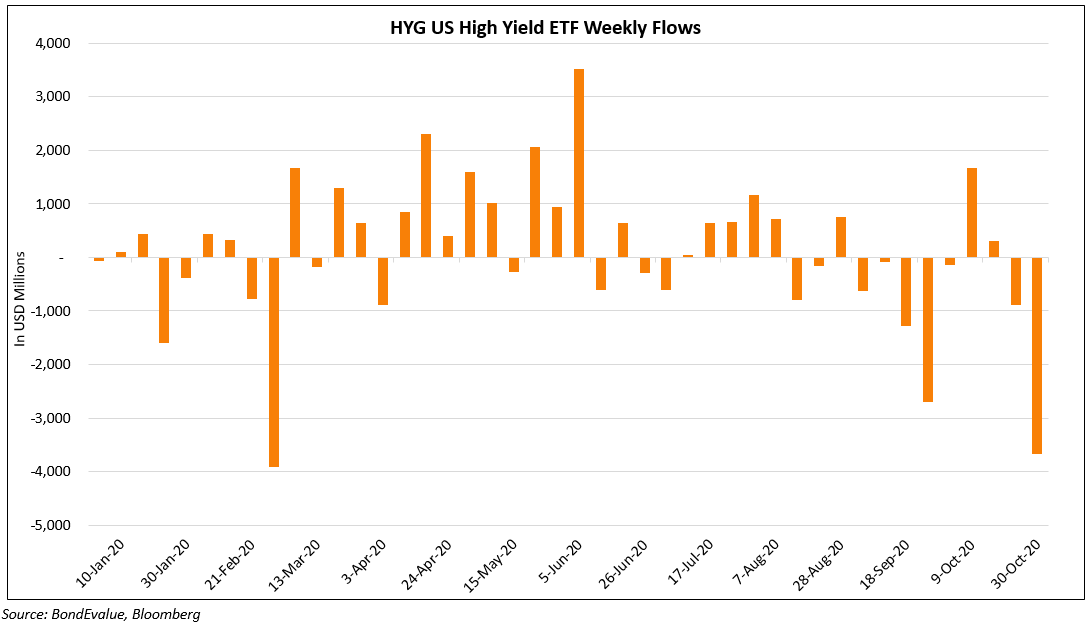 Major Greek lender Piraeus Bank saw its stock and bonds take a beating on the secondary markets since late last week. Piraeus has asked the ECB’s regulatory arm, the Single Supervisory Mechanism (SSM) on Friday to approve an interest payment of €165mn ($192mn) on its contingent convertible (CoCo) bonds, which is due on December 2. The approval is required as SSM had earlier recommended European banks to not distribute capital amid the ongoing pandemic. Should the approval not come through, Piraeus’ CoCo bonds would convert to equity. Given that the CoCos are held solely by Greece’s bank rescue fund HFSF, it would end up owning over 60% of the bank from the current 26%. Piraeus said on Monday that it had no plans to proceed with a capital increase and that its capital ratio stands at 16.1%, higher than regulatory requirement of 11.25%, as per Greek news company Ekathimerini.

Traders in Argentina are snapping up Argentina’s sovereign dollar-linked notes, given its attractive payoff if the Argentinian peso depreciates or gets devalued, as reported by Bloomberg. The President of Argentina, Alberto Fernandez last month said that there was no devaluation coming  – “If someone is speculating about a devaluation, speculate as you wish because there isn’t going to be one,” said Fernandez on an Argentine TV station C5N. Despite the commentary, traders are buying the bonds on a consensus that the peso will need to weaken over the next few months to fix economic challenges. The peso is already down ~25% YTD and the lapping up of these bonds indicate a significant fall down the line. Rofex data cited by Bloomberg shows expected devaluation of the currency from ~50% in September to 74% currently.

Argentina first raised $1.8bn via dollar-linked notes maturing in November 2021 early last month. Officials also sold almost $1.7bn in dollar-linked securities at an auction last week, accounting for about half its total fund raising. The notes are structured in such a way that the purchase is made in pesos but the notes are tied to the US dollar and during maturity, the payoff is in pesos. “Dollar futures contracts are pricing in almost 80% devaluation over the next year”, said economist at Alberdi Partners.

Jiayuan International Buys Back $195 Million Worth of Its Dollar Bonds

Chinese real estate developer Jiayuan International used proceeds from its new $200mn 12% bonds due 2022 issued last Friday to buyback its older bonds. The Hong Kong-listed company announced that it had $135mn worth of its 11.375% bonds due May 2022 and $60mn worth of its 13.75% bonds due March 2022. The purchase price was not disclosed by Jiayuan. In a separate filing, Asia Orient Holdings, together with its subsidiaries, said that it had sold a total of $74mn worth of the 11.375% bonds back to Jiayuan at par and subscribed to the same amount of the new bonds. The old 11.375% and 13.75% 2022s now have $115mn and $262.5mn outstanding and the bonds are currently trading at ~98.7 and 100.8 respectively on the secondary markets.

Singapore-based property developer Heeton Holdings announced via an exchange filing that holders have submitted over S$50mn ($37mn) worth of its S$117.75mn 6.08% bonds due 2021 under its exchange offer that expired on Friday. Terms of the exchange offer are as follows:

Heeton’s 6.08% 2021s traded marginally higher at 86.73 cents on the Singapore dollar on the secondary markets.

TBAC refers to the Treasury Borrowing Advisory Committee in the US. This committee gathers every quarter to decide on the refunding estimates by the US Treasury for the following quarters. Before the quarterly refunding announcements, the TBAC also sends surveys and has discussions with primary dealers to see the ability to absorb the expected supply of Treasuries, for example.

The TBAC decided yesterday that the Treasury would borrow $617bn in privately-held net marketable debt, assuming an end-December cash balance of $800bn. The borrowing estimate is $599bn lower than the estimate announced in August 2020. The lower than expected supply was primarily driven by a high beginning-of-October cash balance. During the January – March 2021 quarter, the US Treasury expects to borrow $1.127tn in privately-held net marketable debt, assuming an end-of-March cash balance of $800 billion.

On the growth and yields on Chinese bonds – Ray Dalio, Bridgewater Associates founder

Regardless of who wins the presidential election, the U.S. will run bigger deficits and sell more debt, and because investors globally are overweight in U.S. bonds they will diversify, including by investing more in China, the Bridgewater Associates founder said. He favors Chinese bonds over U.S. debt and expects the Chinese currency to benefit from capital inflows.

“The deal presents more risks than opportunities for UniCredit as legal risks would increase, CET1 (capital) neutrality wouldn’t be met and even assuming significant cost synergies, the deal dilutes 2022-2023 earnings per share by around 20%.”

“It could be extremely costly for the government if they do a one-off devaluation. But when you don’t have financing, you have to sell what you have.”

“Though the targeted long-term repo operation (TLTRO) funding was largely utilized by the banks in Q1 FY2021, the momentum in bond issuance during Q2 FY2021 reflects improved appetite across investor segments. Given the regulatory stance of maintaining accommodative stance of monetary policy and surplus liquidity environment, the issuances could remain strong and spreads are likely to remain narrow over the next few quarters.”

“An income tax on individuals would be a first in the Gulf. I think it will be a significant move and closely watched by other GCC countries.” 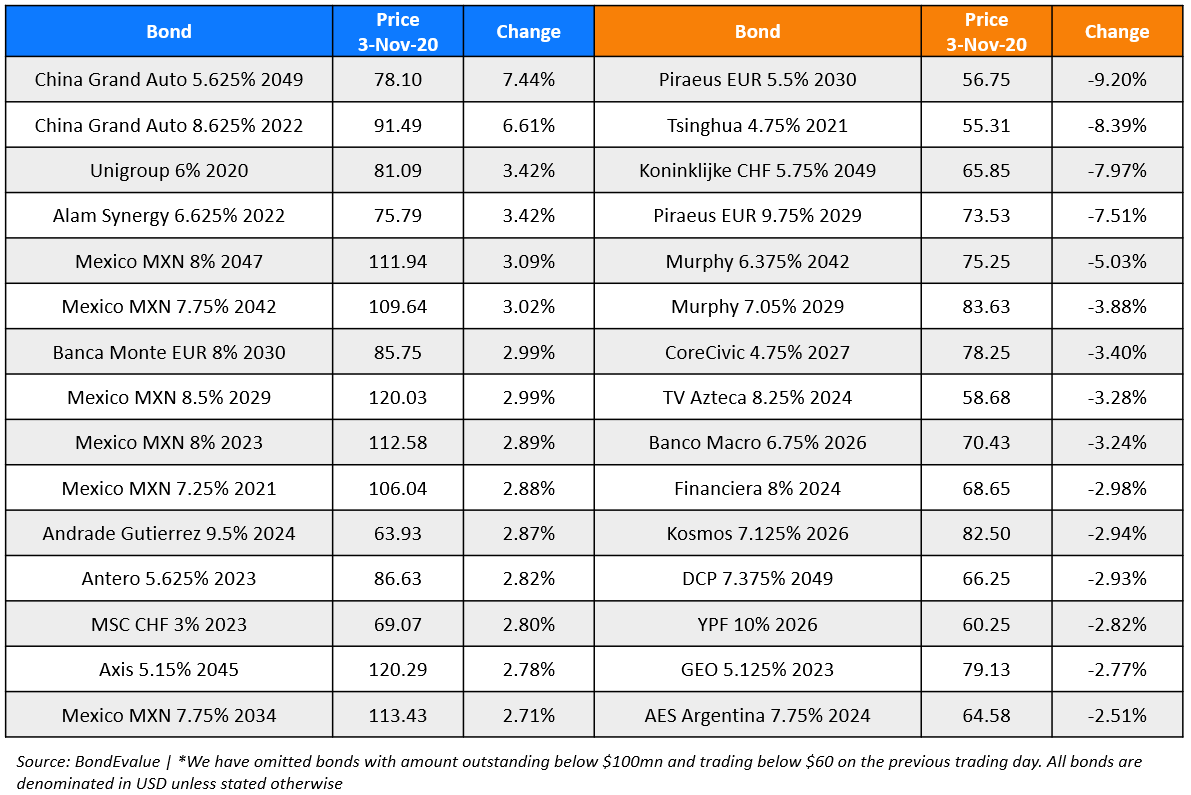