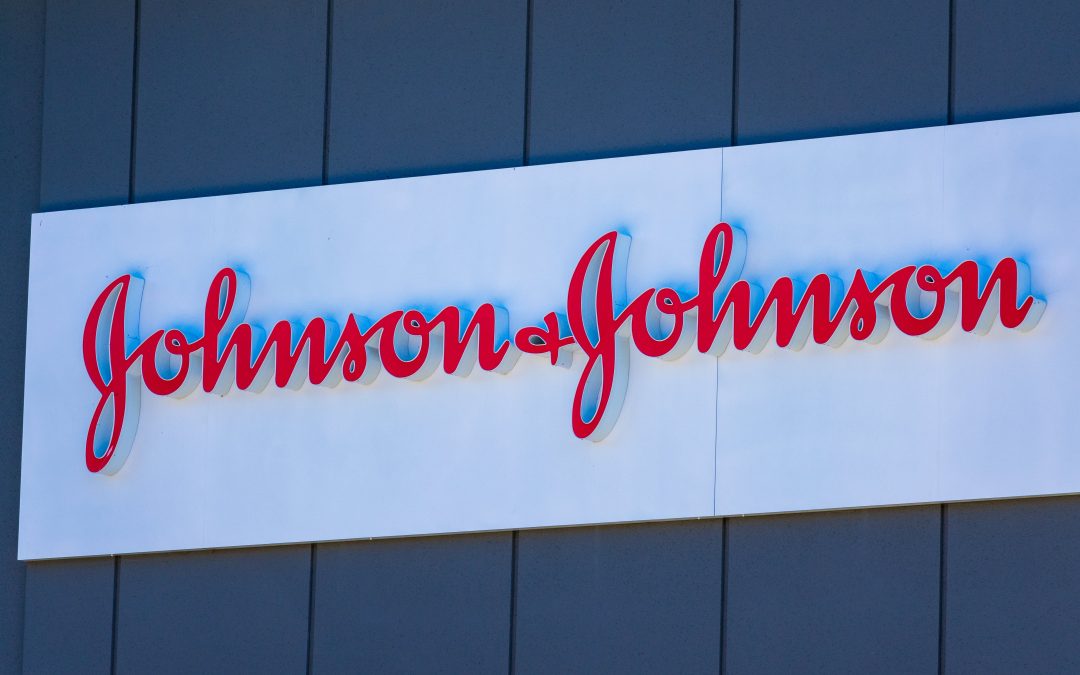 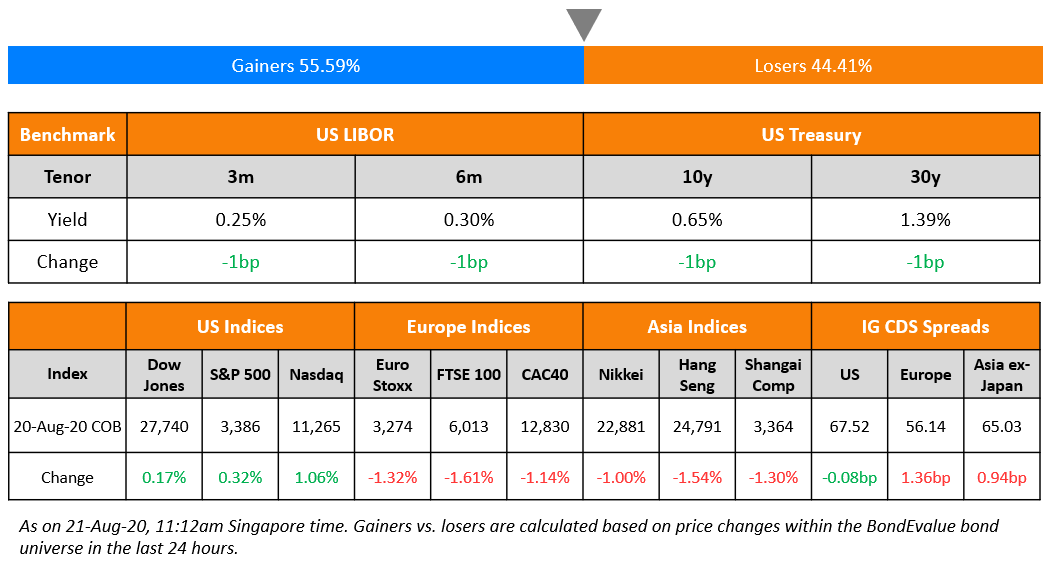 Wall Street gained overnight led by gains in technology stocks despite an unexpected increase in Initial Jobless claims to 1.1mn, above the psychological level of 1mn. Chipmakers’ shares, Apple and Microsoft led increases in the technology space. Treasuries found some support and yields were higher by a few basis points. European shares were lower as concerns increased over a surge in coronavirus cases in Germany and the UK. CDS spreads were higher marginally by 1-2bp. Asian dollar bond deals rebounded on Thursday and markets are opening higher this morning following overnight gains on Wall Street. 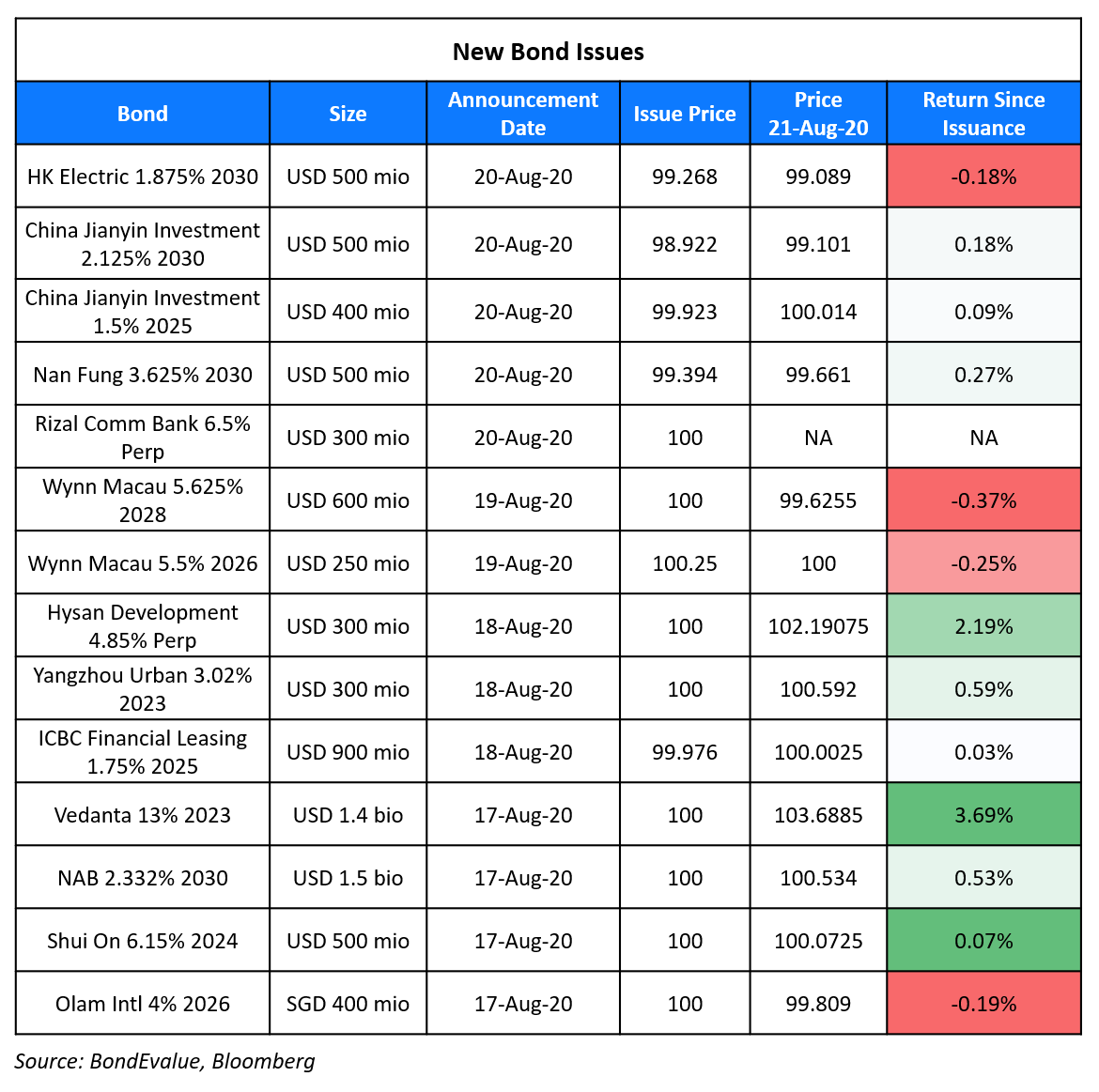 Rizal Commercial Banking Corp (RCBC) raised $300m via Perpetual non-call 5Y (PerpNC5) AT1 bonds to yield 6.5%, 25bp inside initial guidance of 6.75% area. The bonds, with an expected rating of Ba3, received final orders exceeding $600mn, 2x issue size. The securities are the first US dollar AT1s by a Philippine bank under Basel III. If not called on the first call date, the bond’s coupon will reset to the 5Y Treasury yield plus the initial spread of 623.6bp every five years.

Coupons payments will be suspended if the bank breaches regulatory capital requirements has insufficient distributable profits or if ordered by the regulator. The perps will be written down if the Philippine central bank deems the bank to be unviable without a write-off or capital injection, but there is no trigger linked to the bank’s minimum core equity Tier 1 ratio, unlike in some jurisdictions.

Hongkong Electric Co raised $500mn via 10Y bonds to yield 1.956%, 130bp over Treasuries and 30bp inside initial price guidance of T+160bp area. The bonds have an expected rating of A-. The new bonds offer a new issue premium of ~2bp over its 10Y bonds issued in June this year. The older bonds are currently yielding 1.94% on the secondary markets.

Johnson & Johnson (J&J) raised $7.5bn via a six-tranche bond issuance with tenors ranging between 5Y – 40Y to fund its $6.5bn acquisition of Momenta Pharmaceuticals, the largest in the pharma space this year. Momenta focuses on autoimmune diseases and would add to the diversity of J&J. Details of the six tranches are as follows:

J&J was able to price the bonds at razor thin spreads on the back of its perfect credit rating of AAA.

S&P, which assigned a AAA rating to the new bonds, sees limited capacity of incremental debt issuance in the near term and at the current rating, given J&J’s adjusted debt leverage at a 15-year high. Leverage for the last 12 months stood at ~1.3x in Q2 due to share repurchases and a pandemic related slowdown in its medical device business. Moody’s also assigned the highest rating of Aaa to the new senior unsecured notes stating, “New Brunswick, New Jersey-based Johnson & Johnson (“J&J”) is one of the world’s largest healthcare companies, with annual revenues in excess of $80 billion” and stands to benefit from its large scale market presence and a diversified portfolio.

Genting Hong Kong, formerly Star Cruises, stopped payments to creditors citing that the funds are required to maintain critical services. Genting Hong Kong, which operates Star Cruises, Dream Cruises and Crystal Cruises owed the creditors $3.4bn as of July 31. The cruise ship operator proposed that the creditors form a steering committee to evaluate a planned restructuring proposal. Malaysian tycoon Lim Kok owns ~69% of the Hong Kong unit that could be heading into a default. Lim’s conglomerate includes Genting Bhd, which operates casinos and resorts in Las Vegas and Singapore and is also involved in the property, plantation and energy sectors. The cruise shipping industry has been one of the hardest hit due to the ongoing pandemic and travel bans. Genting Hong Kong has specifically been reeling under financial stress as Hong Kong had stopped the entry of non-residents since March this year to curtail the spread of the coronavirus. Banny Lam, head of research at CEB International Investment said, “For Genting, the financial stress may push the owner to sell the asset, or liquidate the entire firm,” and added that “Liquidation is not very likely, but there is such a possibility if Lim doesn’t have money and can’t find a buyer for its assets. In that case, equity holders rank behind bond holders to get compensated.”

Genting Overseas’ 4.25% bonds due 2027 traded lower by 2 points this week to trade at 101 currently. Genting Bhd is the Keepwell Provider (Term of the day, explained below) for Genting Overseas’s dollar bonds.

American Airlines Group announced on Thursday that it plans to suspends ~700 flights to and from 15 US cities in October on the back of travel demand remaining low on the back of the pandemic. Another reason for the planned suspension is the uncertainty around financial aid by the US government. Congress has been debating for weeks now on whether it should extend further payroll assistance to the struggling airlines that would keep thousands of airline workers employed. The airline said, “This is the first step as American continues to evaluate its network and plans for additional schedule changes in the coming weeks”. American had received $5.8bn in payroll assistance as part of the previous aid package. According to Fox Business, several airlines have been privately warning lawmakers that they would be forced to suspend service to some smaller airports without assistance. American’s 5% bonds due 2022 traded lower by 2.4% to currently trade at 62 cents on the dollar. While Delta has not announced changes to its schedule, its 3.625% bonds due 2022 fell by 2.7% to 97.4 on the secondary markets currently.

Emilio Lozoya, former head of Mexico’s state oil company, Pemex has alleged through a 60-page declaration that three ex-presidents, four former finance ministers, two presidential challengers, two state governors and a host of legislators were involved in the bribery scandal involving the political elite of Mexico and Pemex. The document provides details of the bribes using money from Brazilian construction firm Odebrecht as well as alleged kickbacks to legislators for helping in passing of an energy reform. The names in the declaration include the former presidents Pena Nieto, Felipe Calderon and Carlos Salinas. Lozoya has pleaded not guilty and has offered to cooperate with the Mexican authorities in return for leniency.

The scandal has been extensively covered in the media. President Obrador, who was elected in 2018 through an anti-corruption sentiment played a YouTube footage of Mexican Senate aides with bundles of cash at a news conference in which he declared that “This video … displays the filth of the regime of corruption,” and added that many television stations didn’t showcase the images. “All this money was used to buy … consciences, to buy votes.” However, some analysts believe that the President could be using the scandal to discredit his opponents ahead of key midterm elections. Max Kaiser, head of the anti-corruption commission at Coparmex, a business lobby, and a former government under-secretary said, “This trial is being played out in the media,” adding “It appears to be designed to be able to talk about [the president’s] political enemies.” Pemex’s dollar bonds traded stable on the secondary markets.

A keepwell provision is a legal agreement between a parent company and a subsidiary to ensure solvency and financial stability of the subsidiary for the duration of the agreement. Keepwell provisions are included in bond terms to offer bondholders confidence on the issuer’s ability to repay. The keepwell structure emerged around 2012-2013 to assuage concerns of investors over a bond issuer’s creditworthiness. However, it is important for investors to understand that keepwell deeds are not a guarantee that the parent company will support the subsidiary in the event of a default, and there has previously been no precedent on the enforcement of keepwell structures.

“The mere existence of precautionary liquidity arrangements has a calming effect on investors,” Panetta and Schnabel said. “This move ultimately improved market sentiment, leading to a dramatic drop in US dollar financing costs.”

“This will be part of toolkits for corporate treasurers and we’ll see more issuance going forward. At the end of last year, and continuing through the cycle, we have seen pretty consistent benefits of five basis points to 10 basis points,” said Smith.

On fall in treasury yields after US jobless claims disappoints – Peter Boockvar, chief investment officer at the Bleakley Advisory Group

“The data this month is obviously in the midst of UI benefits that were not extended and hopefully the decline in continuing claims reflected people getting jobs without the extra $600 rather than just falling off the rolls,” wrote Boockvar. “One has to wonder whether some reclosings had an impact on claims but we also have to see in coming weeks what, if any, impact there will be with many schools not reopening and going virtual instead,” he added.

On bonds not likely to cushion any stock sell-off – Charles Woodhoues, Chief Investment Officer at QSuper

“There’s the Covid crisis, there’s geopolitical conflicts around the world, there’s the U.S. election,” he said. QSuper is investing “as broadly as possible around asset classes where we see return opportunities, but have some ability to diversify against sharp pull backs in the listed equity markets.”

“There’s a great deal of uncertainty,” Woodhouse said. “If we felt more confident, you’d see more concentration in the portfolio.” 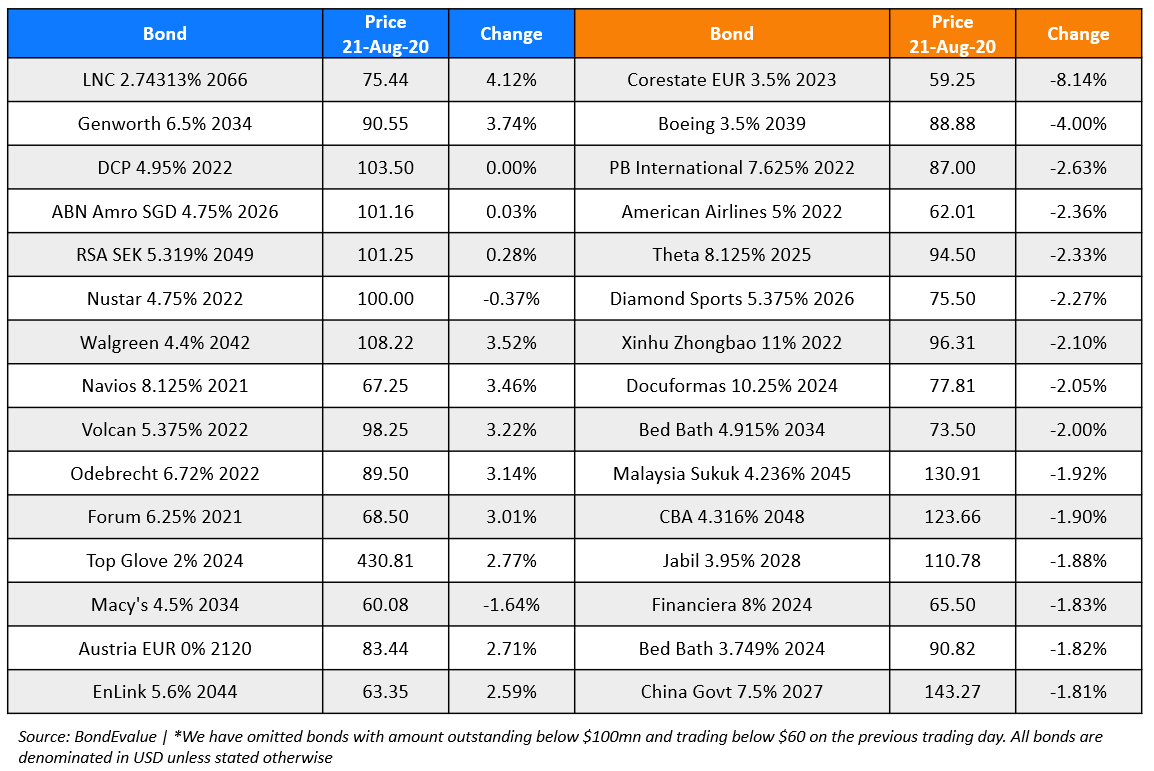