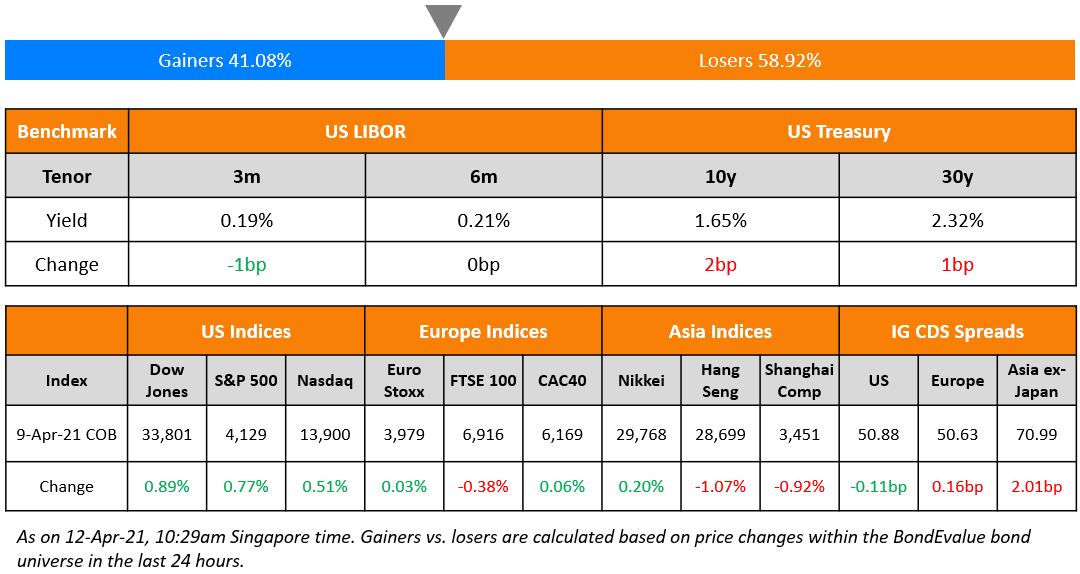 S&P ended 0.8% higher to a new closing high while the Nasdaq gained 0.5% ahead of the quarterly earnings season which sees banking majors JPMC, Wells Fargo, Goldman Sachs, Citigroup and Morgan Stanley report on Wednesday and Thursday. US 10Y Treasury yields rose 2bp to 1.65%. European equities were mixed with FTSE down 0.4% while DAX and CAC were 0.2% and 0.1% higher. US IG CDS spreads were 0.1bp tighter and HY was 2.1bp wider. EU main CDS spreads were 0.2bp wider and crossover spreads widened 1.5bp. Asian equity markets are down over 0.6% and Asia ex-Japan CDS spreads were 2bp wider. Asian primary markets are off to a busy start to the week with 6 new dollar deals launched including Genting, CK Hutch and Mandiri. 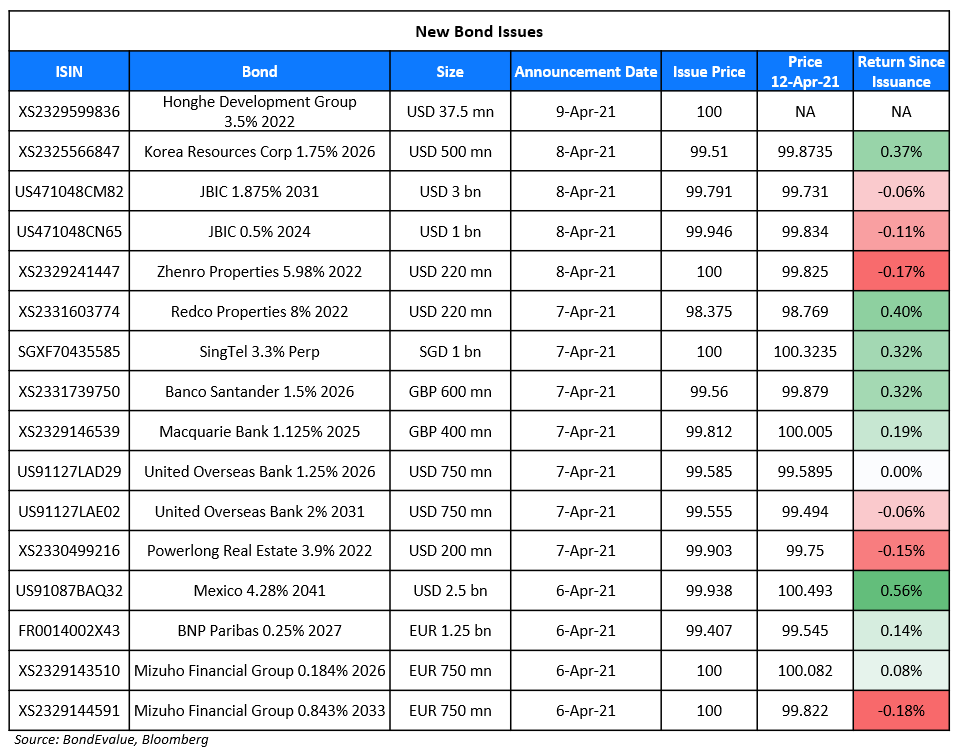 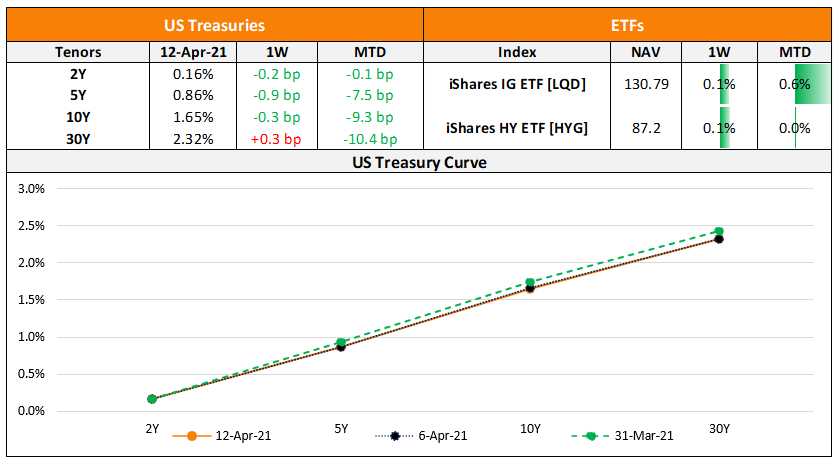 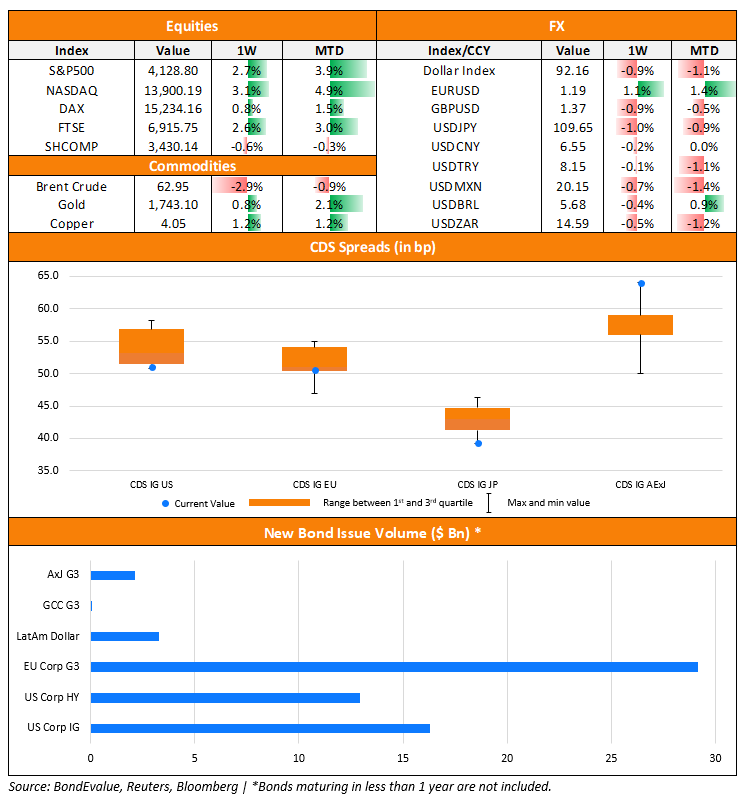 US primary market issuances rose to $31.5bn, up over 2x vs. $15bn the week prior. The rise in issuance can be attributed to both IG at $16.3bn and HY at $12.94bn vs. $6.4bn and $7.8bn respectively. The largest deals in the IG space were led by auto majors Toyota and GM raising $2.5bn and $2.25bn respectively via three-tranchers. In the HY space, Merck led the table, raising $4.1bn followed by Newscorp’s $1bn issuance. In North America, there were a total of 67 upgrades and 24 downgrades combined, across the three major rating agencies last week. LatAm saw $3.26bn in deals last week vs. $2bn in the week prior with Mexico as the only issuer raising $3.26bn via a 20Y bond offering. EU Corporate G3 issuance saw an increase of ~2x last week to $29bn from $15bn in the week prior – KfW raised $9.75bn via EUR and USD issuances followed by France’s CFF and BNP raising €1.5bn and €1.25bn. GCC and Sukuk G3 issuance was muted with minor deals worth $40mn vs. $2.6bn in the week prior. APAC ex-Japan G3 issuances dropped to $2.4bn vs. $9.8bn in the prior week. Issuances were led by UOB’s $1.5bn dual-trancher and Kores’ $500mn deals while Redco and Zhenro Properties’ raised $220mn each. In the Asia ex-Japan region, there were 10 upgrades and 9 downgrades combined, across the three major rating agencies last week.

Kungfu bonds are offshore USD denominated bonds issued by Chinese issuers, aka Chinese dollar bonds. These issuances offer a source of funding from offshore markets for local borrowers and help build an international investor base. The Kungfu bond market has been primarily dominated by government related institutions, banks and real estate developers. Bloomberg reported on Friday that among the 1,000+ Kungfu bonds they track, Huarong’s bonds fell the most.

“We don’t have strong reflation-trade momentum at the moment because people are waiting for more data,” said Tenengauzer. “As the data comes in, we are probably going to see the reflation trade play out again more strongly” toward the middle of the year. “The longer inflation stays at 2.5%, the more underwater you are from holding fixed income.”
Shahid Ladha, head of Group-of-10 rates strategy for the Americas at BNP Paribas SA
“The market’s been pricing in a reflation theme already since the second half of 2020, but strong, realized prints would almost add fuel to the fire,” said Ladha.
On the fierce debate among investors over the next moves for bond market
Akio Kato, a portfolio manager at Mitsubishi UFJ Kokusai
“Around 1.7% could be a peak level after pricing in the potential U.S. economic recovery,” Kato said. “Fed policy makers have repeatedly said they will stick with their current monetary policy. If the market’s perception for the economic outlook comes closer to the Fed’s, 10-year yields could fall to about 1.5%.”
Peter Yi, director of short-duration fixed income and head of credit research at Northern Trust Asset Management
“U.S. Treasuries at about 1.7% is a pretty good relative value compared to the S&P 500’s estimated forward dividend yield at just below 1.5%,” Yi said. “If rates get too high there will be a bite to risky assets and the economy, and the Fed will do something to prevent that.”
Steven Oh, global head of credit and fixed income at PineBridge Investments
“We are of the view that we are going to continue to be in a lower inflationary environment both in the U.S. and globally,” Oh said. “Growth will pick up after Covid but it won’t accelerate to the point sufficient to cause a material rise in yields.”
Ed Yardeni, founder of Yardeni Research Inc.
“Higher yields make a lot of sense given the extraordinary strength of the economy and mounting inflationary pressures,” he said. “Over the next few months economic indicators, particularly real gross domestic product, will probably return back to where they were before the pandemic.”
Luca Paolini, chief strategist at Pictet Asset Management
“It’s a problem for markets because it may force the Fed to tighten,” Paolini said at a webinar the firm held on March 31. “It may at some point even limit spending, because obviously the spending power will be eroded by inflation. There is a genuine risk of inflation surprising on the upside.”
Elaine Stokes, a portfolio manager at Loomis Sayles & Co.
“I don’t expect runaway anything,” Stokes said, referring to inflation, growth and yields. “A lot of the pain is already done and felt. And we have to remind ourselves that we are also going back to all the issues we were dealing with pre-Covid.”
Ben Carlson, director of institutional asset management at Ritholtz Wealth Management
“We have all been conditioned to believe there are always these huge long cycles,” he said. “But we maybe are just going to have shorter cycles where there are spikes, and people come back in and yields move all around. That’s kind of the new regime.”
On the worry that ‘greenium’ is a sign of mispriced credit risks
Mitch Reznick , head of sustainable fixed income at Federated Hermes
“Everything with a green label is basically being bought,” said Reznick. “It’s not an alarming risk at this point,” said Reznick. “It’s not that credit risk is being ignored; it’s not being as precisely priced.”
Philip Brown, global head of public sector and sustainable debt capital markets at Citi
“The greenium is now a very well established concept,” said Brown. “We will see this greenium become more structural in the secondary market.”
Caroline Harrison, senior research analyst at the CBI
“The sources of [green bond] demand are increasing more rapidly than the sources of supply,” said Harrison.
Mark Dowding, chief investment officer at BlueBay Asset Management
“Green bonds are used by borrowers to cash in on lower borrowing costs,” said Dowding. “I don’t see what difference that’s making at all. I’m not sure that’s making the impact that people would like to see.”
Colin Reedie, co-head of global fixed income at Legal & General Investment Management
“Our policy is to treat green bonds no differently from vanilla bonds from the same issuer,” given the risk of default is the same regardless of what the money is funding, he added.
Emre Tiftik, director of sustainability research at the Institute of International Finance
“If there is a [debt] bubble, it’s not driven by green bonds,” he said.
On China’s antitrust regulator bulking up as crackdown on behemoths widens
Liu Xu, a researcher at the National Strategy Institute of Tsinghua University
“An increase in staffing as well as in the quality of the bureau’s law enforcement capabilities is a must for an antitrust push,” said Liu. “Otherwise regulators won’t be able to handle multiple cases at one time, and the public will question how transparent the investigation process would be,” said Liu.
Fred Hu, chairman of private equity firm Primavera Group
“The heavy fine on one of the country’s dominant tech leaders also sends a strong message to the broader tech sector that the Chinese regulators, like their European counterparts, are serious about cracking down on Big Tech.”
On the need for new government and radical change of direction for Lebanon’s recovery – Jihad Azour, director of the IMF’s Middle East and Central Asia Department
“The change of direction cannot be done on a piecemeal basis. It requires a comprehensive approach,” Azour said. “In (the) absence of a new government that can lead this transformation, it’s very difficult to expect that the situation will in itself improve,” he added. “Lebanon needs some large financing in order to jumpstart the economy again in order also to allow Lebanon to be on a recovery path that will take time but is highly needed.” “This reform package is the starting point. And for that you need to have a new government who will lead the implementation of this reform programme.” 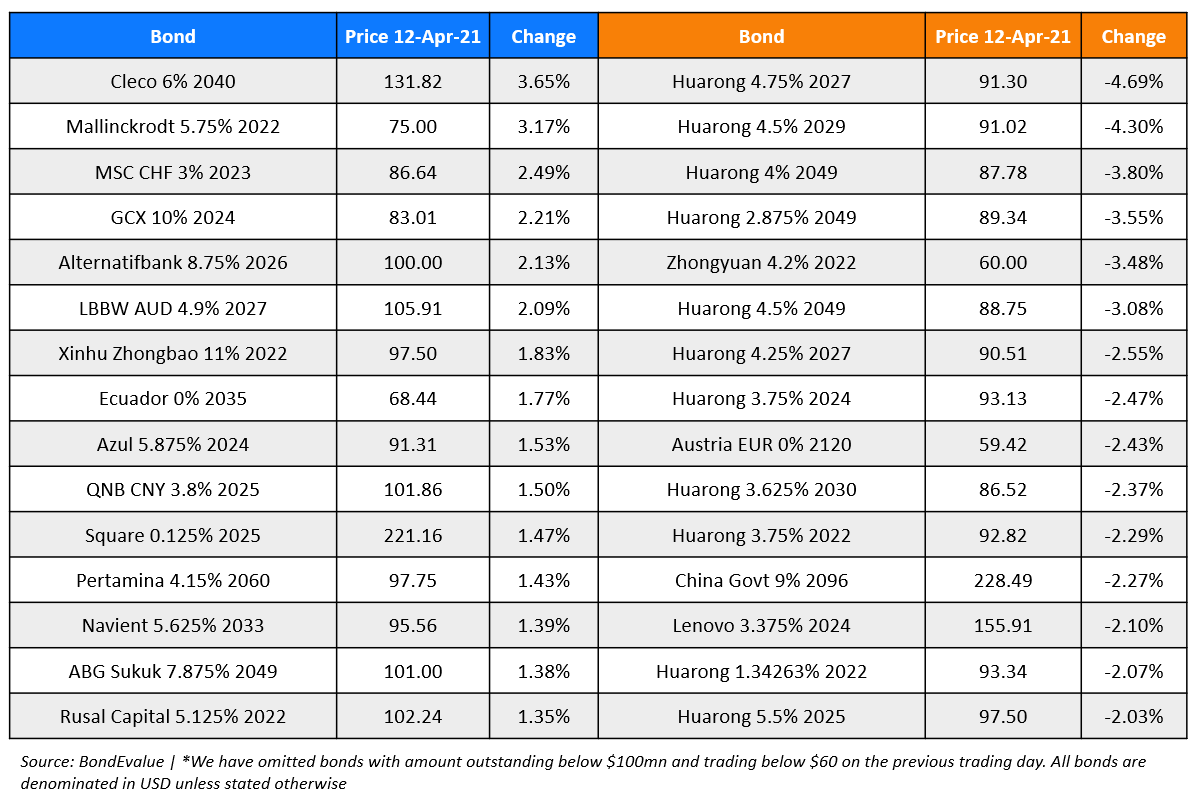