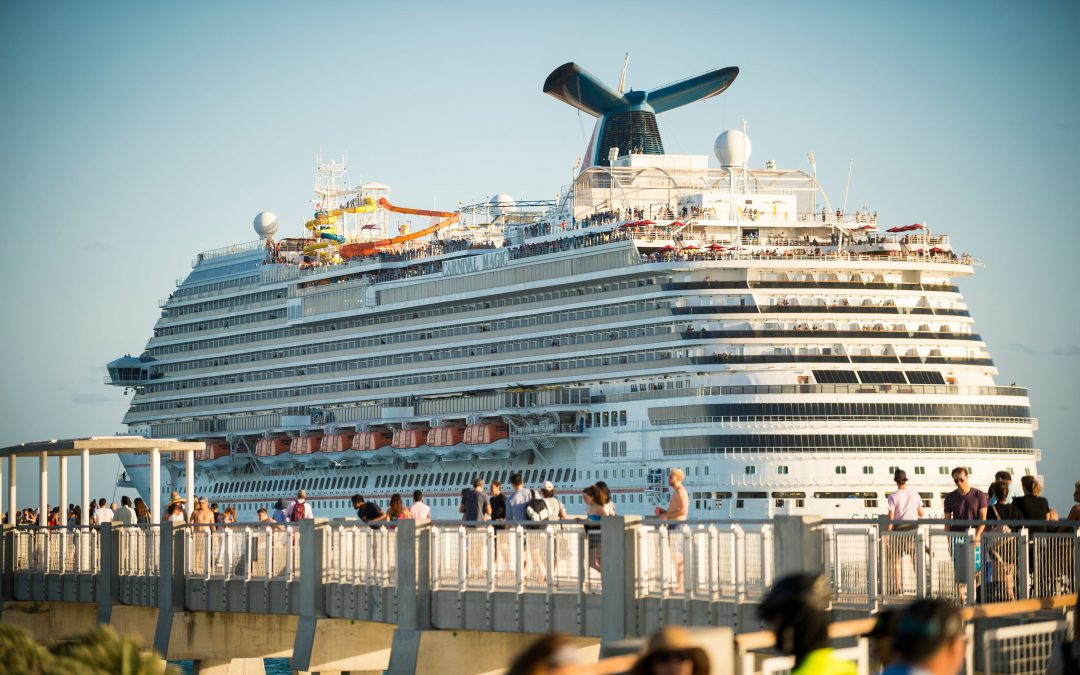 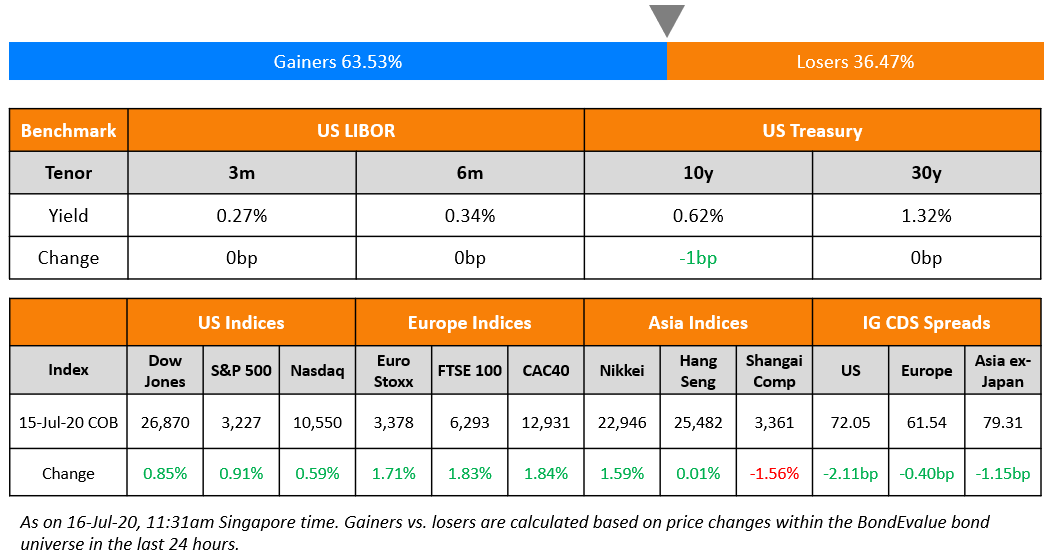 Another good session overnight on Wall Street as hopes for the Covid-19 vaccine along with Goldman Sachs’ strong quarterly results outweighed any concerns over surging coronavirus cases or US-China tensions over Hong Kong. European shares fared better with the hope that the EU will reach a deal regarding the €750bn Covid-19 recovery fund. The UK sold GBP 3.25bn of three-year bonds at a record low yield of -0.069%. US and European IG CDS spreads narrowed 2bp and 1bp respectively. China Q2 GDP came out this morning at 3.2% (2.4% expected) becoming the first major economy to return to growth since the outbreak. Asian markets are opening a bit lower this morning and IG Asia ex-Japan CDS spreads are at their lowest since early March. 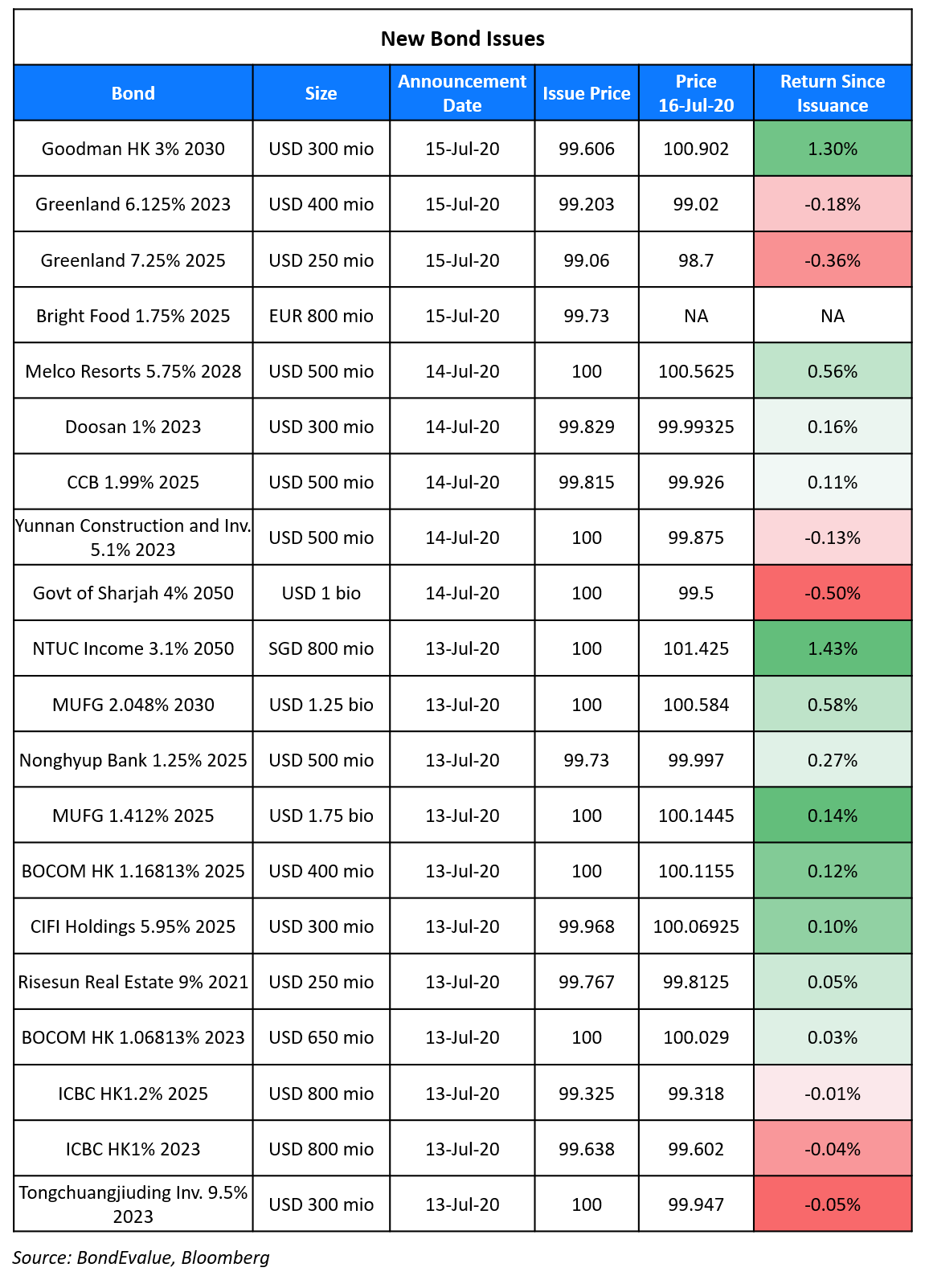 Industrial property company Goodman Hong Kong Logistics Fund raised $300mn via 10Y bonds at a yield of 3.046%, 240bp over Treasuries and 50bps inside initial guidance of T+290bp area. The bonds, expected to be rated BBB+, received orders over $2.8bn when final guidance was announced, 9.33x issue size. Goodman HK Finance is the issuer and Goodman Hong Kong Logistics Fund and Goodman HK Investments are the guarantors of the bond.

China’s Bright Food Group raised €800mn ($913m) via 5Y bonds at a yield of 1.807%, 215bp over mid-swaps and 35bp inside initial guidance of MS+250bp area. The bonds, with an expected rating of Baa3/BBB–/BBB+, received final orders over €3.25bn when the final guidance was announced, 4.06x issue size. Wholly owned subsidiary Bright Food Singapore is the issuer and parent company Bright Food International is the guarantor.

Carnival Manages to Raise $1.26 Billion via Bonds to Stay Afloat

Carnival Corp has returned to the debt market with a two-trance deal totaling $1.26bn in a bid to survive amid the ill effects of the pandemic. The world’s largest cruise group raised:

The new bonds are secured by a second-priority lien, which will result in the lenders getting a lower priority of repayment in case of bankruptcy. The company has already raised over $10bn to tide over the pandemic. The cruise industry has been one of the worst hit by the pandemic that has forced cruise companies to seek loans against guarantees of assets including the cruise liners and private islands owned by the companies. Moody’s rated the company’s second lien debt at Ba1 and placed the company’s ratings on review for downgrade. S&P rated the proposed second-priority senior secured notes at BB+. The company’s bonds were stable with its 11.5% bonds due 2023 issued in April trading at 108.99 while its 7.2% bonds due 2023 trading at 86 cents on the dollar on the secondary markets.

The role of large banks has once again come under a lens as their fixed income trading desks report large profits while several companies struggle to just stay afloat amidst the ongoing pandemic. The Federal Reserve’s efforts to maintain adequate liquidity in the debt markets has resulted in a $10bn bonanza for the largest US banks. Second quarter earnings of JP Morgan Chase, Citigroup and Goldman Sachs from fixed income trading and debt underwritings surged to $20.5bn against a quarterly average of $10.4bn over the last four years. The big banks capitalized on the debt issuance spree by beleaguered companies, which enabled them to remain profitable despite a surge in loan-loss provisions. Citigroup posted a 41% gain in debt underwriting revenue while JP Morgan generated $7.3bn via fixed income trading in the second quarter. CEO of Goldman Sachs, David Solomon told analysts, “The activity levels that we saw at the end of March and April were really extraordinary,” and added that “In a period where there’s enormous change and enormous volatility in markets, we became super busy because our clients are super busy.”

This has raised a question whether the actions initiated by the Fed have benefited the financial sector more than the troubled companies intended to be bailed out. “Goldman’s earnings this quarter were too good — almost indecent,” remarked Octavio Marenzi, chief executive officer at capital markets consultancy Opimas adding that “The Fed has been able to engineer a huge bounce-back in the markets by injecting trillions of dollars, beneﬁting investment banks primarily. This will lead to calls for the government to do more to help Main Street rather than Wall Street.”

Chinese real estate developer Modern Land (China) has launched a tender offer to buyback its $335mn 7.95% bonds due 2021. The purchase price is at par plus accrued and unpaid interest. The tender offer has a cap of $100mn and a deadline of July 27. The bonds are currently trading at 98.375 on the secondary markets.

Another Chinese real estate developer Yango Group launched a tender offer to buyback its $243.4mn 7.5% bonds due November 16 this year. It is offering $100.5 per $100 in principal plus accrued interest. The company cited liability management and optimization of its debt structure as the reason for the buyback. Yango had previously purchased $6.6mn worth of these bonds on the market on March 31.The bonds are currently trading at 100.625 on the secondary markets.

In related news, Greentown China Holdings announced results of its tender offer to buyback its $600mn 4.55% bonds due November this year. The Chinese real estate company said it received bonds worth $220.871mn had been validly tendered, of which it purchased bonds worth $149.999mn. The purchase price was $100.5 per $100 in principal.

Philippine port operator ICTSI announced results of its tender offer for its 5.5% perpetuals callable in May 2021. Bondholders tendered $65.483mn worth of bonds under the offer, which expired on July 14. ICTSI has subsequently reopened the offer with a new deadline of July 29. The perpetuals have $199.278mn remaining as amount outstanding.

The Credit Roundtable (CRT), a bondholder industry group that counts some of the largest institutional fixed income investors among its members wrote a letter to the US Securities and Exchange Commission on Wednesday warning against companies’ use of EBITDAC (earnings before interest, tax, depreciation, amortization and coronavirus). In its letter, the CRT stated, “We believe EBITDAC calculations include many hypothetical, highly subjective, and potentially misleading adjustments. The CRT joins other industry groups that are critical of EBITDAC. The use of EBITDAC compromises a fundamental assessment of a company’s ability to incur and service debt to the detriment of current and future providers of capital.” The CRT, which counts Vanguard and Charles Schwab among its members, joins The European Leveraged Finance Association, Moody’s and Fitch who also voiced concerns over the use of EBITDAC. David Knutson, the CRT’s vice chair and also the head of credit research for the Americas at Schroders, said,”It’s essential to have accurate and transparent information about a company’s financials. There’s going to be an increasing desire to try to employ creative accounting because there’s a need.”

The Altman’s Z-Score is a model developed by famed NYU professor, Edward Altman, to predict the likelihood of companies going bankrupt. The model, developed in 1968, combines five financial ratios to arrive at a score based on the formula below.

The Altman’s Z-Score can be interpreted based on the following ranges:

Canada’s economic activity will not return to pre-pandemic levels until 2022 and interest rates will remain low for at least two years, the Bank of Canada said as it again held its key overnight rate steady. “We recognize that households and businesses are facing an unusual amount of uncertainty. Against that background, we are being unusually clear that interest rates are going to be low for a long time,” Macklem said.

“In the last couple of weeks with the rapid rise of cases of coronavirus in the U.S., we did take down our U.S. projection,” Macklem said. “That does spill back into Canada.” He also said that a second wave requiring a broad-based lockdown in Canada and globally would impact the Bank of Canada’s central scenario outlook. “We’d be well below the central scenario and that would imply we would need more monetary policy stimulus to get back to our inflation target,” he said. 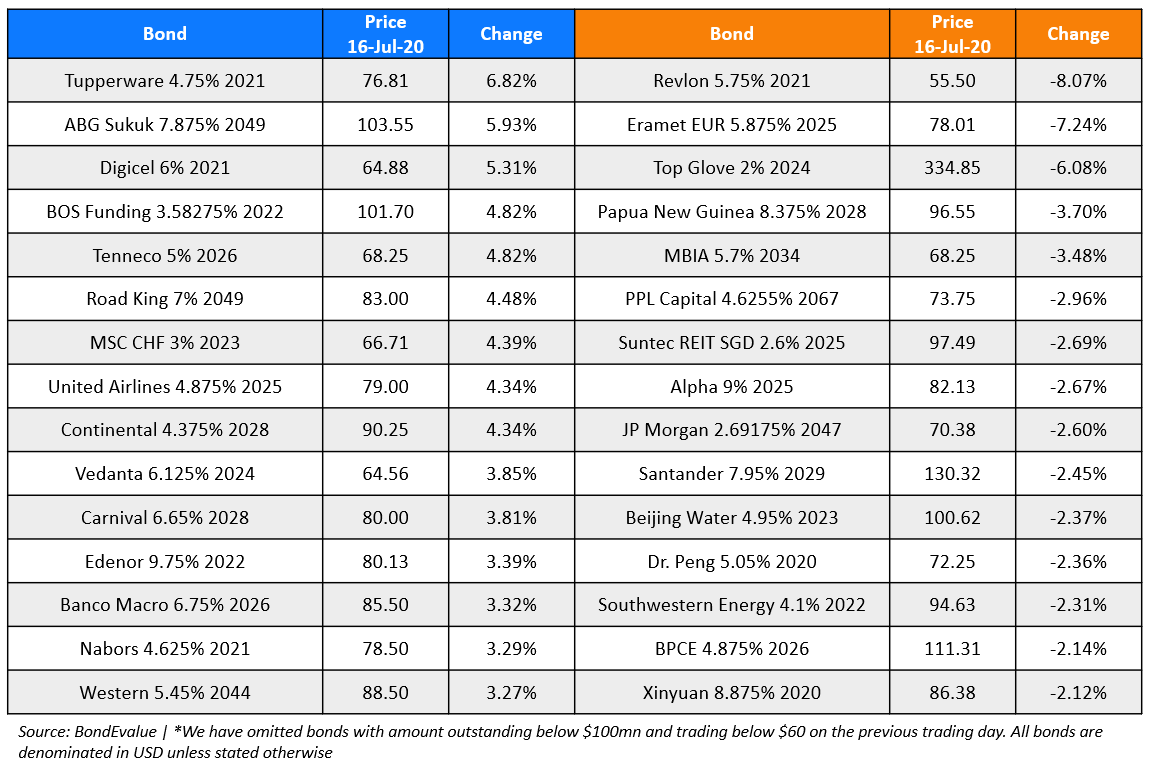