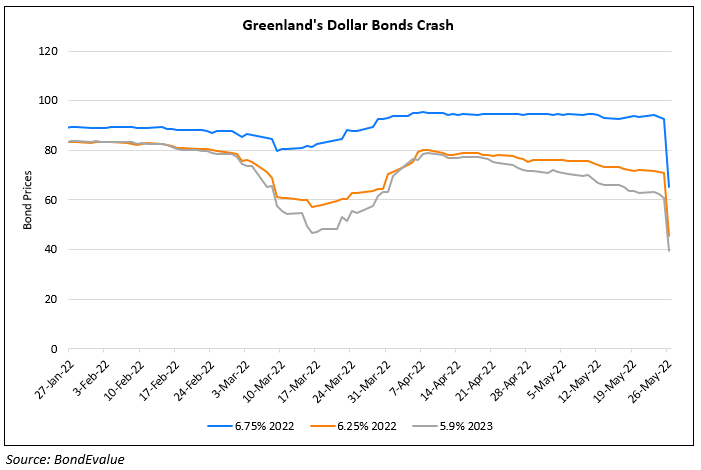 Dollar bonds of Greenland Global plummeted over 20 points to distressed levels of 40 cents on the dollar. While no specific reason emerged for the drop, Bloomberg notes that new investor concerns have flared up in fresh repayment worries regarding the developer. Greenland was downgraded by S&P to B- from B+ earlier this week. The rating agency cited its deteriorating liquidity and cash depletion for debt repayment as the reasons for the downgrade. It added that uncertainty over the developer’s ability to dispose assets and to generate internal resources to repay offshore debt due in next 3-6 months had risen considerably. Greenland has $2.1bn in domestic and offshore bonds due in the rest of 2022 and a another $1.7bn in 2023.

Separately, Evergrande’s local unit’s bondholders approved a six-month extension on the coupon and principal payments on its RMB 4bn ($600mn) 5.9% puttable bond due 2023. The bonds were puttable on May 26 and have now been extended to November 26.

In related real estate news, the Shanghai Stock Exchange is planning a meeting on Friday for a handful of Chinese developers seeking to RMB-denominated bonds, as per sources. This is touted to be the latest effort by Beijing to help the sector. Developers attending the meet include Country Garden, Longfor Group, Midea Real Estate, Cifi Holdings and Seazen Holdings.