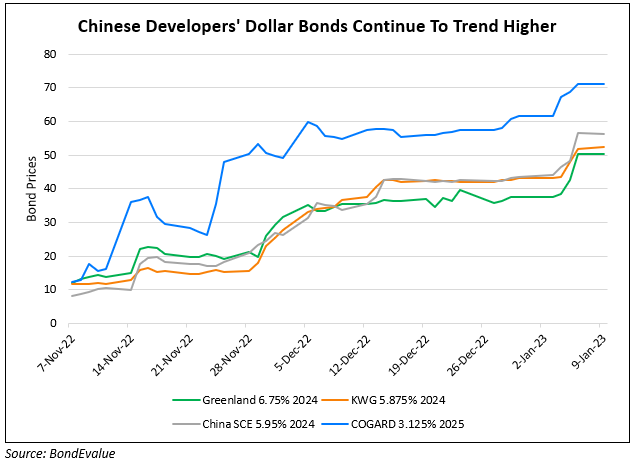 Dollar bonds of Greenland Holding rose by over 15% on Friday. The company reached an agreement with Minyoun Hospitality to sell a 52% stake in its hotel management unit for RMB 624mn ($92mn). Greenland’ hotel management unit is currently held via its fintech unit and has a valuation of RMB 1.2bn ($180mn). While it may not be a large amount on its own, it does come as a relief for the distressed developer that defaulted on paying the principal on its outstanding $362mn 5.6% bond that was due on November 13. It later got approval from its bondholders to extend maturities of its dollar bonds.

Besides, its dollar bonds also gained alongside that of several other Chinese property developers that saw their bonds rise last week. This was after news broke out that China was planning further easing measures to help ease liquidity stresses at some of its ‘too-big-to-fail’ developers in addition to its existing set of measures introduced last year. Also, in a latest update, CRIC reported that Chinese property developers raised a total of RMB 101.8bn ($14.9bn) in December, up 33.4% YoY, driven by more state support for the highly indebted sector. For the whole year 2022, it noted that funding stood at RMB 824bn ($121bn), down 38% YoY.