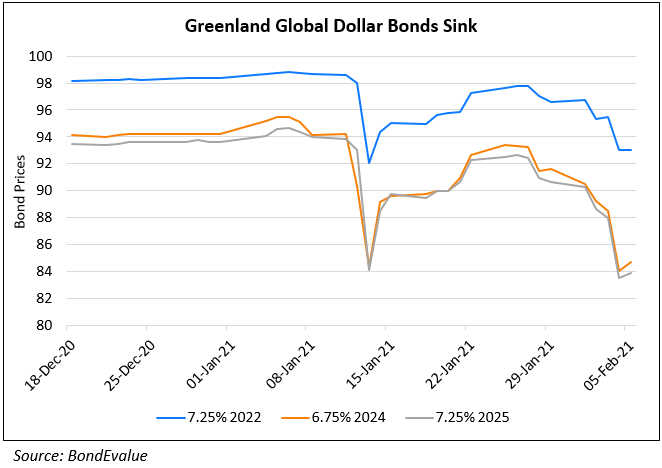 Greenland Global’s dollar bonds fell on Thursday on worries of spillover effects from China Fortune Land Development (CFLD), whose bonds currently trade at distressed levels over liquidity concerns. While Greenland does have a state-owned interest, recent developments have shown that the authorities are not holding back from allowing state-owned entities to default. Shanghai Municipal Investment Group, a sovereign wealth fund of the municipal government holds a 20.55% stake in Greenland as of March 2020. The wealth fund is a related entity to the State-owned Assets Supervision and Administration Commission of the State Council (SASAC) highlighting the government’s involvement in Greenland. Greenland currently breaches two of the three-red lines drawn by the authorities, with short-term debt to cash at 1.5x and debt to equity at 170% vs thresholds of 1x and 100% respectively. Earlier in January, the company’s bonds fell on similar grounds as worries on CFLD increased, before swiftly recovering.