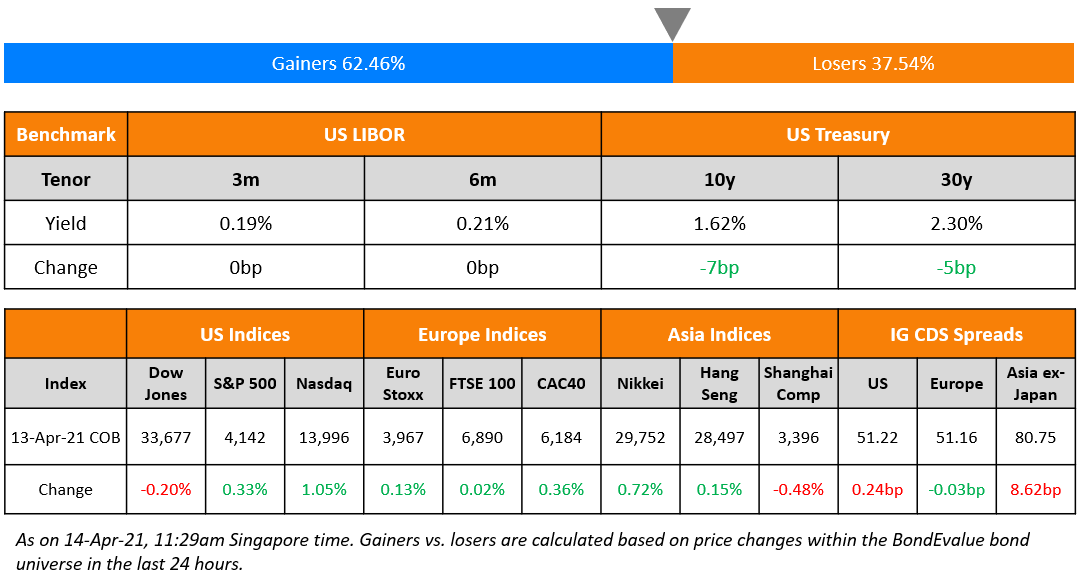 US equities advanced as the S&P was up 0.3% and the Nasdaq rallied 1%. US March headline CPI came in at 2.6% while core CPI was at 1.6% vs. 1.7% and 1.3% respectively in February. The sharp rise in the headline number comes on the back of ‘base effects’ and a 9.1% rise in the gasoline index accounting for nearly half of the increase. US 10Y Treasury yields were dropped 7bp to 1.62%. European equities were slightly higher as DAX and CAC were up 0.1% and 0.4% and FTSE was flat. US IG CDS spreads were 0.2bp wider and HY was 1.6bp tighter. EU main CDS spreads were flat and crossover spreads widened 0.8bp. Asian equity markets are higher by 0.5% and Asia ex-Japan CDS spreads were a massive 8.6bp wider. Asia ex-Japan CDS spreads are at a six-month high with Bloomberg reporting that concerns about China Huarong and several other companies failing to publish earnings on time leading to the move. 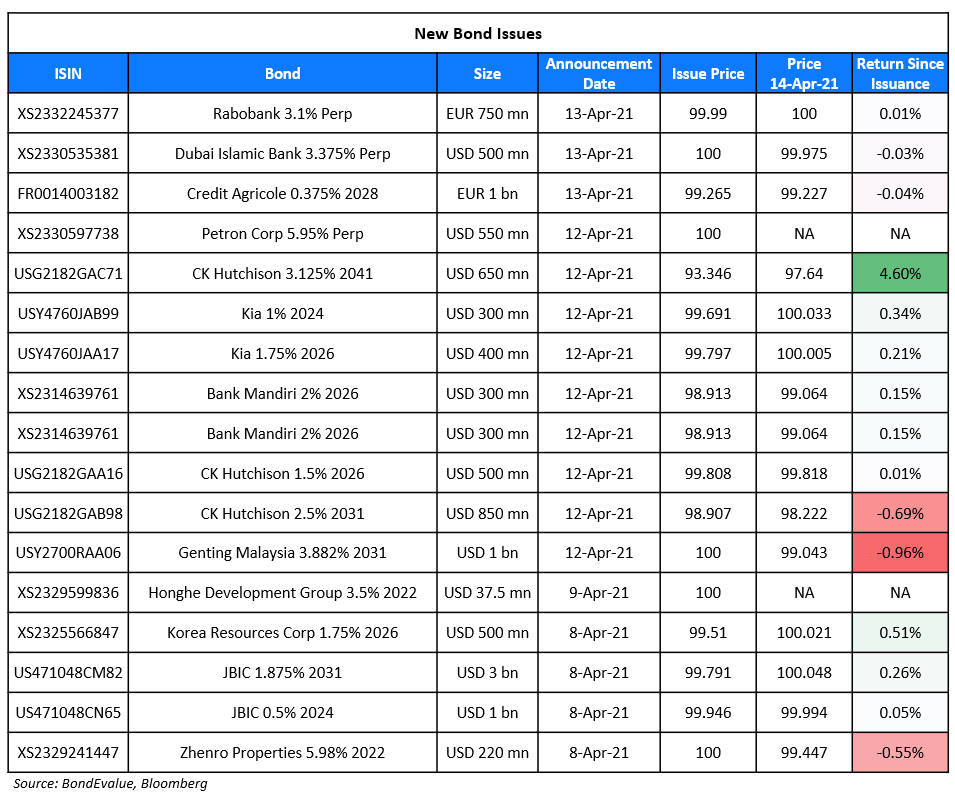 A Credit Default Swap (CDS) is a financial contract between two counterparties that allows an investor to “swap” or offset the credit risk with another investor. CDS acts like an insurance policy wherein the buyer makes regular payments to the seller to protect itself from an issuer default. In the event of a default, the buyer receives a payout, typically the face value of the bond or loan, from the seller of the CDS as per the agreement. CDS spreads are a commonly used metric to track the market-priced creditworthiness of an issuer. A widening (increase) in CDS spreads indicates a deterioration in creditworthiness and vice-versa. China Huarong’s CDS spreads have shot up massively with default risks rising.

On the possibility of the European Central Bank simplifying its inflation goal – Francois Villeroy de Galhau, Bank of France Governor
“Our inflation objective must be understood as simple, symmetric and medium-term oriented,” Villeroy said. “‘Simple’ means that we could reexamine over-sophisticated qualifiers still associated with the 2% figure,” he said. “‘Symmetric’ refers to the fact that our objective is a target and not a ceiling: we might be ready to accept inflation higher than 2% for some time.” “Reinvestments under PEPP would remain significant, net purchases would continue under the APP, possibly somewhat adapted.” “It is the combination of these three levers that should be used as the foundations of the “equilibrium triangle” of our monetary policy in this next phase,” Villeroy said.

“EM domestic risks have been incrementally changing,” the strategists wrote. “EM FX will find it difficult to attract inflows at current levels of both exchange rates and interest rates.” “This is resulting in ever fewer candidates we would like to be long in EM currencies, against an environment of rising rates where EM growth will be lagging,” the strategists said.
On IMF’s rosier view of Asia and warning of Fed fallout on markets – Jonathan Ostry, deputy director of the IMF’s Asia and Pacific Department
“Setbacks in the vaccine rollout, questions about the potency of the vaccine against new variants of the disease, and a resurgence of the virus, together constitute a key downside risk,” Ostry said. “If US yields rise faster than markets expect, or if there is miscommunication about future US monetary policy, adverse spillovers through financial channels and capital outflows, as during the 2013 taper tantrum, could present challenges by compromising macro-financial stability,” Ostry said. “However, the increase in leverage across government, household and corporate balance sheets means that higher borrowing costs, when they occur, will hurt,” he said. “Asia’s recovery has yet to become fully entrenched, and this is expected to keep inflationary pressures subdued,” he said.
On stocks and bonds rising with inflation concern fleeting
Mike Loewengart, managing director of investment strategy at E*Trade Financial
The market has been skittish about rates for some time,” said Loewengart. “While this may cause some short-term volatility, investors have been pretty steadfast in their faith in a full economic recovery.”
Emily Roland, co-chief investment strategist at John Hancock Investment Management
“A lot of growth and inflation have already been priced into the market,” said Roland. “It’s almost as if you need to exceed those expectations in order to see a more pronounced reaction from markets.”
On Europe’s half-century bond bonanza running up against weak demand
Peter Chatwell, head of multi-asset strategy at Mizuho International Plc
“The odds are stacked against longer-dated supply being taken down well,” said Chatwell. “There is no likely outcome where long end rates are able to sustain a bid.”
Jan von Gerich, Nordea’s chief strategist
It may become trickier later this year, as the economic recovery materializes and an environment of higher yields may start to look less remote,” he said.
Antoine Bouvet, senior rates strategist at ING Groep NV
“I don’t sense a shift in attitude towards duration based on the better economic outlook, not yet at least,” said Bouvet. “The lower-for-longer narrative is still widely shared in Europe.” 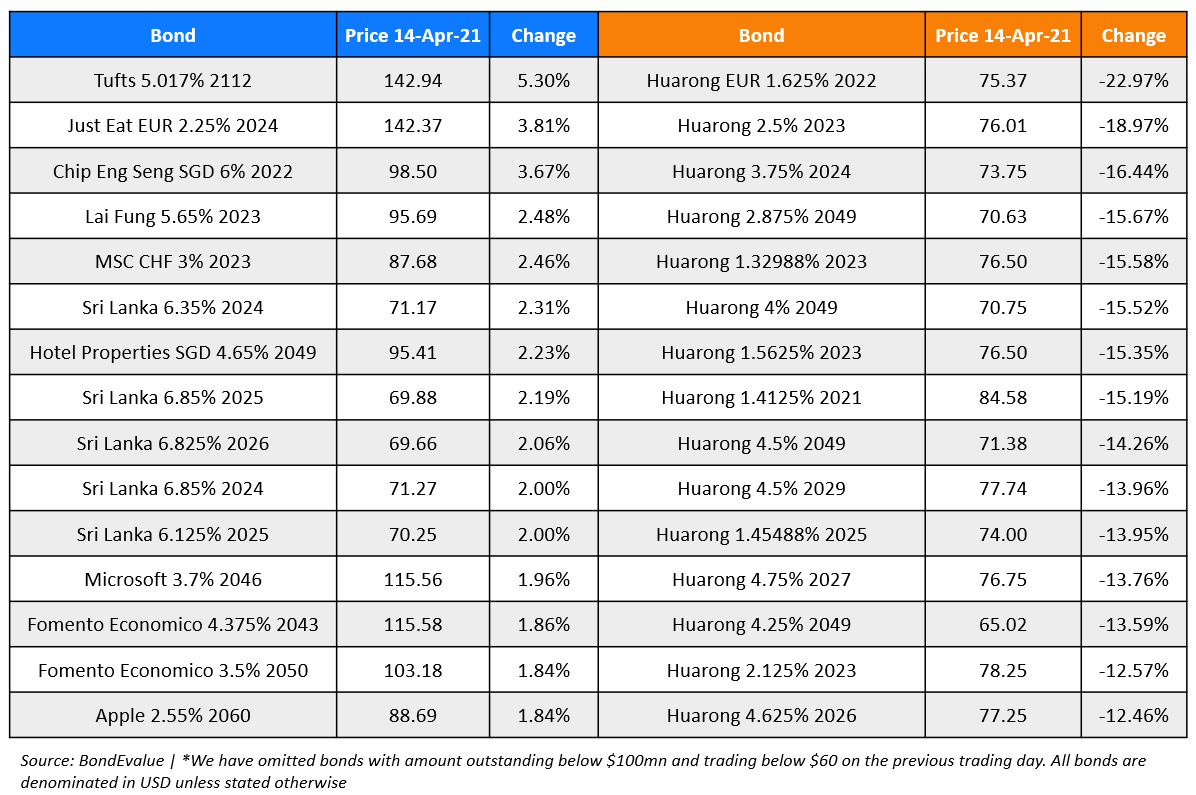