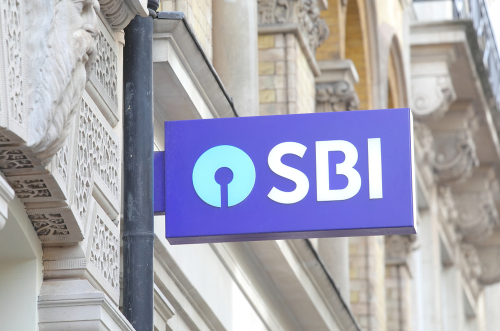 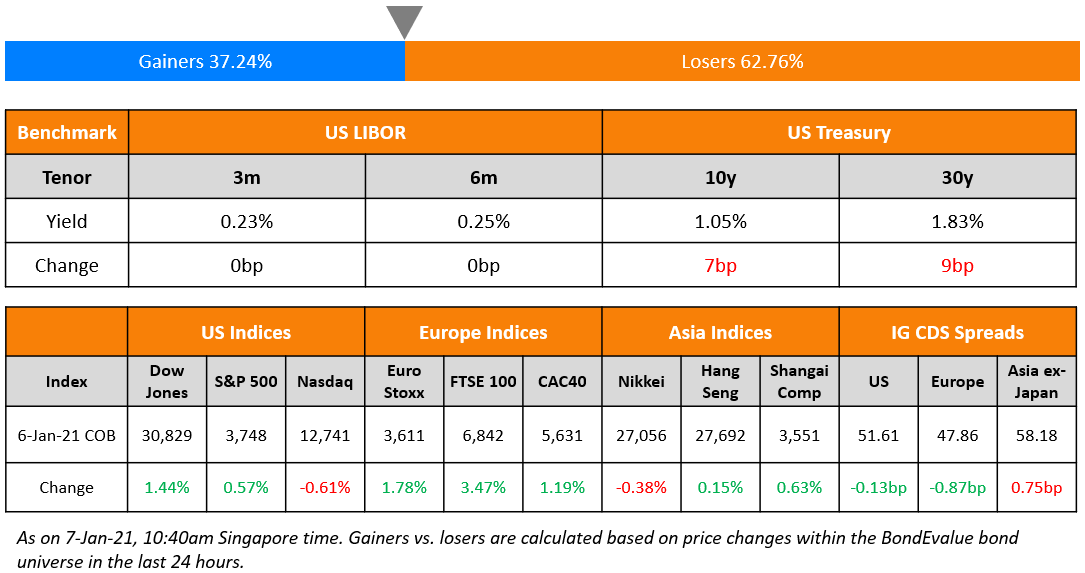 The S&P rose by 0.6% while Nasdaq fell 0.6% as the Georgia senate run-offs went in favor of the Democrats – financials and industrials rallied while tech was down given increased prospects of regulatory scrutiny and tax increases. The US Treasury 10Y sold-off as the yield breached 1% for the first time since March 2020 with expectations of more fiscal spending given the Democratic control of the senate. US ADP payrolls printed at -123k vs forecasts of 88k. German Bund yields reached a one-month high of -0.53% as Europe’s long-term inflation expectations rose to 1.2871% as evidenced by the 5Y5Y forward inflation swap – the highest level since early 2020. Crude prices rallied again yesterday as Saudi Arabia announced it would cut oil production. US IG CDS spreads were 0.1bp tighter and HY was 1bp tighter. EU main and crossover CDS spreads tightened 0.9bp and 4.9bp respectively. China’s foreign exchange regulator said on Wednesday it will avoid disorderly fluctuation in the currency market in 2021. NYSE is expected to make a second U-turn on the policy of delisting three Chinese telecom companies given the US Treasury’s update. Alibaba is expected to come with an $8bn dollar bond issuance as per sources while US is expected to ban transactions with eight Chinese software applications, including Ant Group’s Alipay mobile payment app. Asian dollar bond primary issuances continue to flood markets with 7 new deals today. Asia ex-Japan CDS spreads widened 0.8bp and Asian equities have opened ~1% higher. 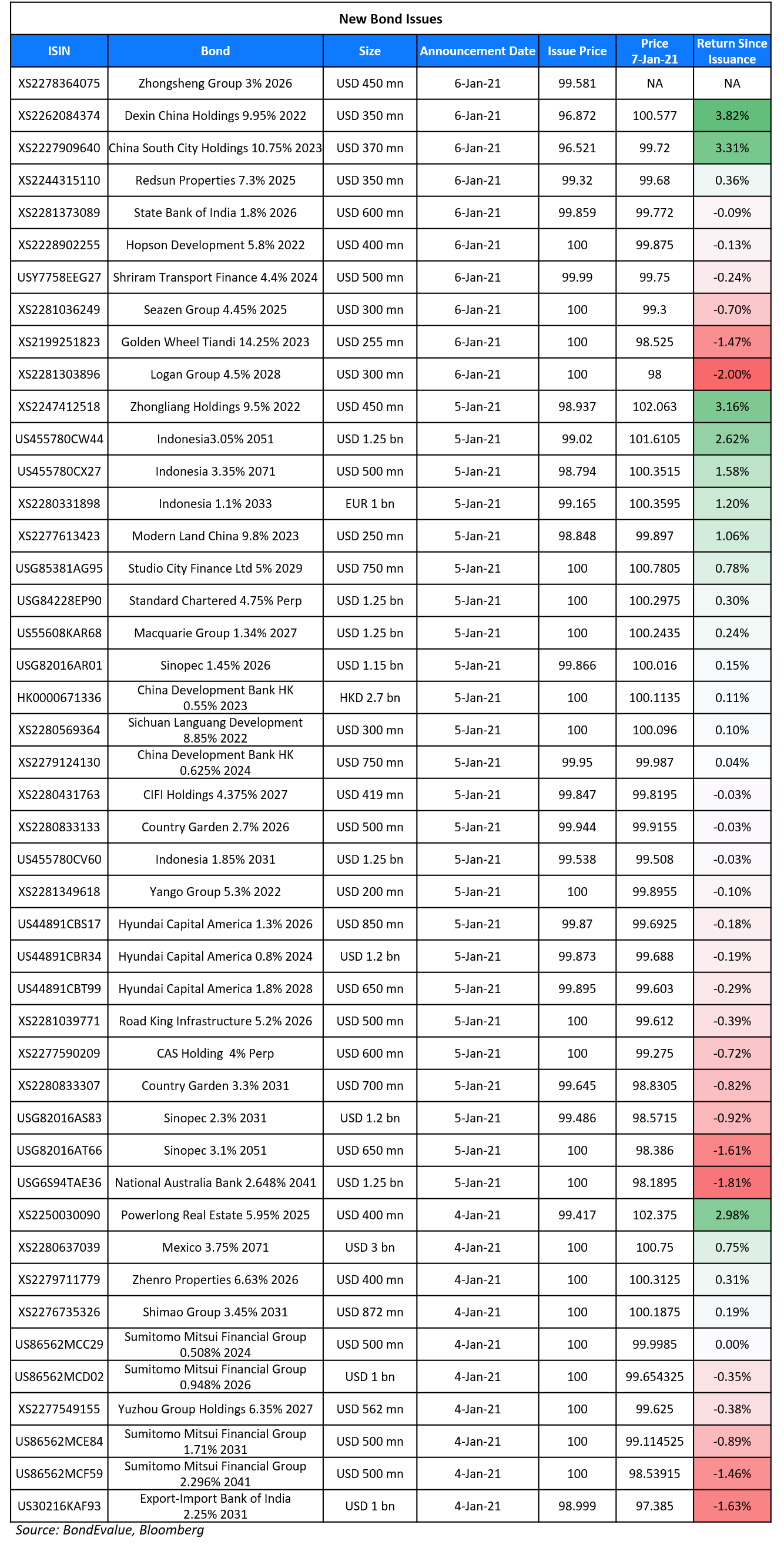 Zhongsheng Group raised $450mn via a 5Y bond at a yield of 3.091% or T+268bp, 32bp inside initial guidance of T+300bp area. The bonds have expected ratings of Baa3/BBB and received orders over $2.75bn, ~6.1x issue size. Proceeds from the deal will be used for refinancing and general corporate purposes.

Looking at the best and worst performing bonds from the Middle East region, a flight to safety among investors is apparent as the top performers list is dominated by sovereigns and state-backed corporates while the worst performing list includes lower-rated names from Turkey, Oman and UAE among other nations.

Among the best performing hard currency bonds from Middle Eastern issuers in 2020, Dubai-based state-owned port operator DP World (DPW) topped the charts with a price return (ex-coupon) of 15.3% on its 4.7% bonds due 2049. Other top performing bonds include Israel-based Teva Pharma, Saudi energy companies Saudi Electricity and ACWA Power along with sovereigns Abu Dhabi, Qatar, Saudi Arabia and Jordan with returns of 10-12% through last year.

Among the worst performers, Dubai-based Emirates REIT topped the list with its 5.125% sukuk due 2022 losing 49% of its value to currently trade at 55 cents on the dollar. Other bonds on the list include Omani lenders Bank Dhofar and National Bank of Oman, Turkish corporates including Global Liman, Turk Hava Yollari (THY), Odea Bank and Albaraka and sovereigns Iraq and Bahrain. 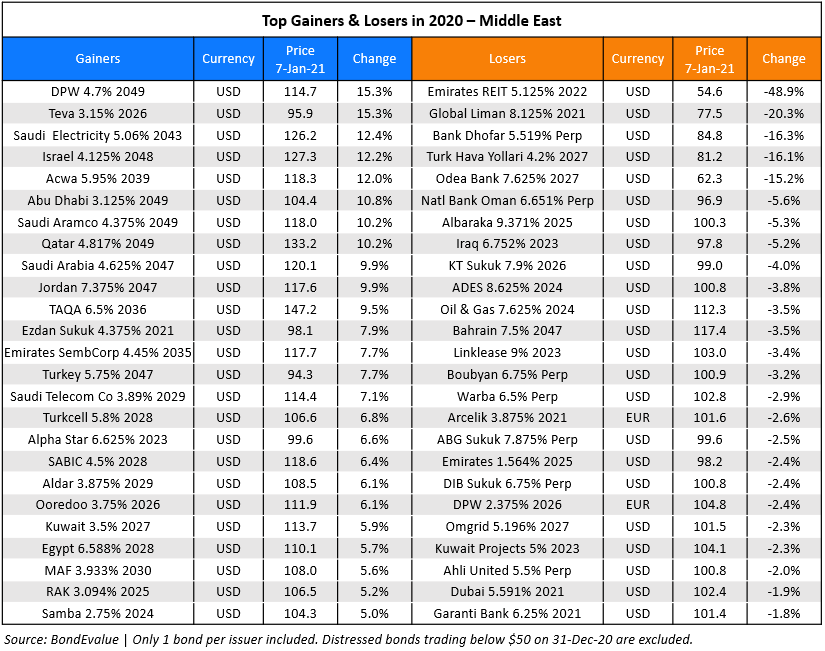 The largest deals from Middle Eastern issuers in 2020 were dominated by sovereigns including Israel, Qatar, Abu Dhabi, Turkey and Saudi. Among corporate bonds, Saudi Aramco was the largest issuer followed by Mamoura, the debt issuing company under UAE’s sovereign wealth fund Mubadala Investment Company. In terms of return since issuance Qatar, Abu Dhabi and Saudi sovereign bonds led the charts with price returns (ex-coupon) ranging from 22%-28%. Many of Turkey’s dollar bonds also rallied ~5% even as the Turkish Lira fell ~25% last year. 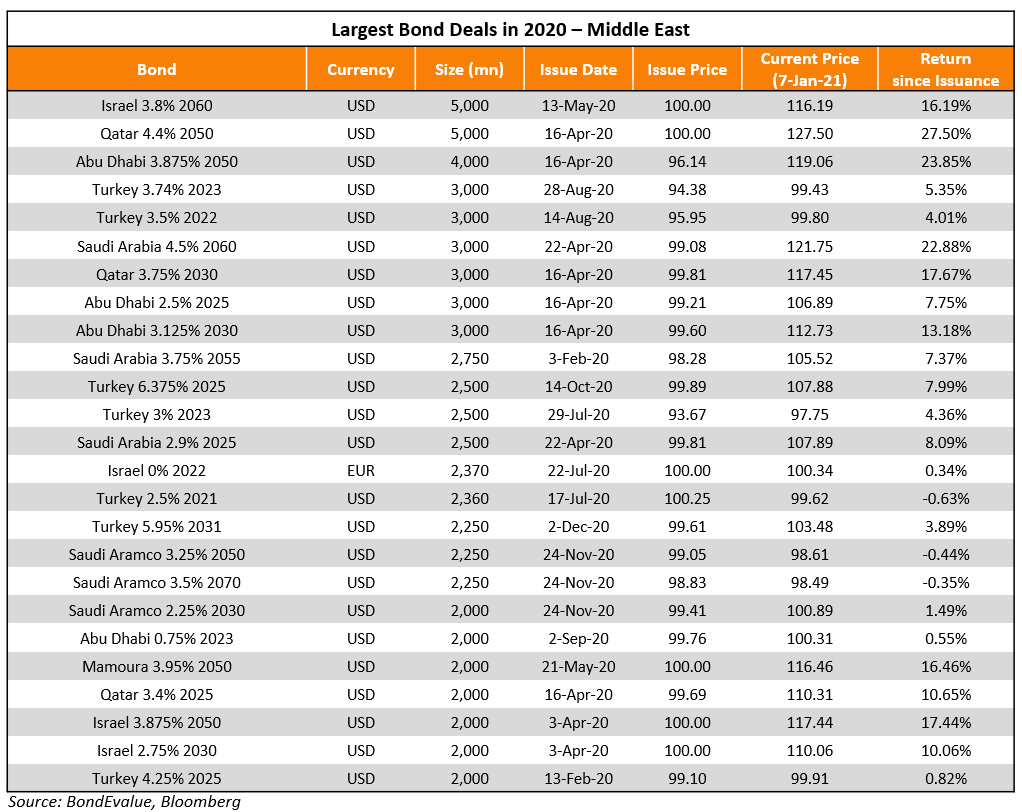 Indian financials State Bank of India (SBI) and Shriram Transport Finance tapped the dollar bond markets with new deals priced on Wednesday. SBI, India’s largest lender by assets, raised $600mn via a 5.5Y bond at a yield of 1.827% or T+140bp, 35bp inside initial guidance of T+175bp area. The bonds have expected ratings of Baa3/BBB-/BBB-, in line with the state-owned issuer, and received orders over $1.2bn, 2x issue size. In terms of allocation, Asia took 71% of the issuance, EMEA 29%; by investor type, sovereign wealth funds took 36%, banks 37%, asset managers 17%, insurance companies and private banks 5% each.

Shriram Transport Finance raised $500mn via a 3.15Y social bond at a yield of 4.4%, 25bp inside initial guidance of 4.65% area. The bonds have expected ratings of BB-/BB in line with the issuer and will be drawn off a Global MTN programme. Proceeds will be used in accordance with the issuer’s social finance framework.

In the first public debt issuance from the Gulf in the new year, Dubai’s largest bank Emirates NDB (ENDB) raised $750mn via a 5Y bond at a yield of 1.638% or MS+115bp, 35bp inside initial guidance of MS+140bp area. The bonds have expected ratings of A3/A+, in line with the issuer, and received orders of over $2.2bn, ~2.9x issue size. The joint lead managers and bookrunners for the deal include Emirates NBD Capital, ICBC, ING, Mizuho Securities and Standard Chartered Bank. The government of Dubai holds 55.8% stake in the bank through The Investment Corporation of Dubai in ENDB. The bank had last raised $750mn through the issuance of an AT1 perp callable in 2026 with a coupon of 6.125% issued in July last year.

Chinese property developers continue to issue dollar bonds in the first week of 2021 adding to earlier issues by CIFI, Country Garden, Modern Land and Yango, among others that flocked to the dollar bond markets in the new year. Around $1.7bn of dollar bond deals from Chinese developers were priced on Wednesday. 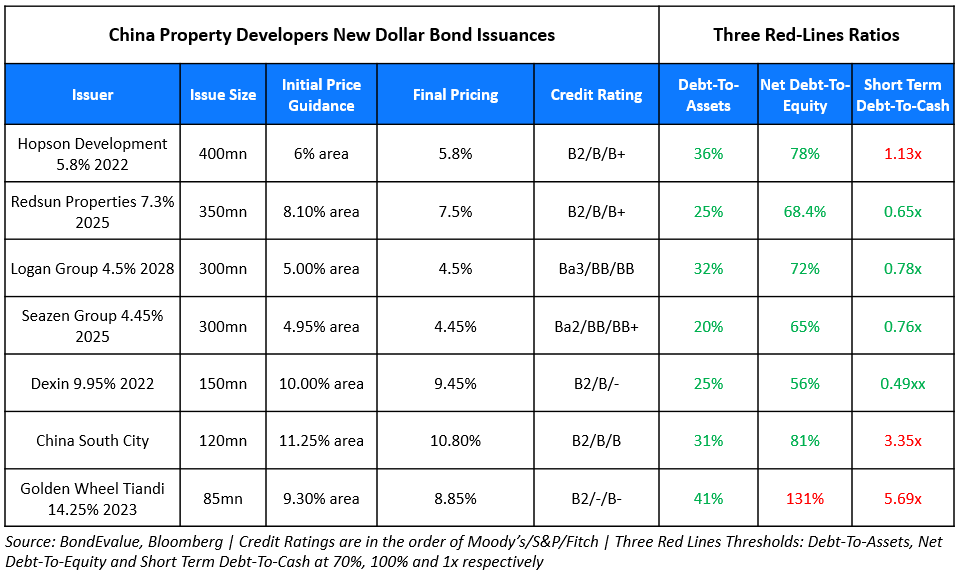 Logan Group’s bonds have expected ratings of BB, and received orders over $3bn, 10x issue size. Proceeds will be used to refinance offshore debt. The tapped bonds trade in line with its 4.85% bonds due December 2026 bond that currently yield 4.49%.

Seazen Group’s bonds are rated BB+ and received orders over $3bn, 10x issue size. Proceeds will be used to repay offshore debt. APAC took 91% of the bonds while EMEA took 9%.

Dexin China’s tapped bonds have expected ratings of B- by S&P and received orders over $2bn, ~13.3x issue size. Proceeds will be used for offshore debt repayment. The tap trades slightly tighter to its initially issued 9.95% 2022s which currently yield 9.48% in the secondary market.

China Fortune Land Development (CFLD) dollar bonds fell 3.5-6% on Wednesday. Increasing concerns about whether CFLD will meet the profit targets set with Ping An Asset Management was expected to be the reason for the move, according to Dong Ma, a partner at Beijing BG Capital Management Ltd reported by Bloomberg. The developer’s operating cash flow is unlikely to improve in the short term and CFLD faces a high maturity wall, he added. CFLD has $4.62bn in debt due in 2021 with a total debt of $13bn. CFLD’s 9% 2021s fell the most by 5.95% to 88.4 while their 8.6% 2024s and 8.05% 2025s were down 5.86% and 5.09% to 78.1 and 75.1 cents on the dollar respectively.

IDB raised $4bn via a 10Y sustainable development bond at a thin yield of 1.18% or MS+15bp. In terms of allocation, central banks and official institutions took 52%, commercial banks 28.5%, fund managers and companies 18% and pension funds and insurance companies 1.5%. IDB is rated AA by S&P, but the notes are unrated. Proceeds will be used for general corporate needs including debt refinancing.

Brazilian lender BBTG raised $500mn via a 5Y green bond at a yield of 2.875%, 12.5bp inside initial guidance of 3% area. BBTG is rated BB-, and the notes received an expected rating of BB-. The new bond received orders of over $1.1bn, 2.2x issue size. Proceeds will be used to refinance and finance green projects.

Brazilian paper company Klabin raised $500mn via a 10Y sustainable bond at a yield of 3.2%, 55bp inside initial guidance of 3.75% area. Klabin is rated BB by S&P, but the bonds are unrated. The new bonds received orders of over $4bn, ~8x issue size. Proceeds will be used to repurchase up to $271mn of its bonds due 2024 notes.

On the unanimous backing from Fed officials for bond-buying pace

According to minutes of the Fed December 2020 meeting

“All participants judged that it would be appropriate to continue those purchases at least at the current pace, and nearly all favored maintaining the current composition of purchases.”  “A couple of participants indicated that they were open to weighting purchases of Treasury securities toward longer maturities.” “Some participants noted that the committee could consider future adjustments to its asset purchases — such as increasing the pace of securities purchases or weighting purchases of Treasury securities toward those that had longer remaining maturities — if such adjustments were deemed appropriate,” the minutes said.

“It doesn’t sound like there was much energy toward making a change,” Stanley said. “I am doubtful that we will see tweaks to the composition of the purchases unless the long end of the yield curve is perceived to be spiraling higher out of control.”

“If things don’t go according to their own forecasts, there will be at least somebody in there who brings back the idea of doing more,” Perli said. “The option of extending maturities of Treasury purchases is a very low hanging fruit that costs literally nothing, and could have some — marginal, maybe, but at least some — benefit.”

“Let’s say checks go out. A one-time increase in stimulus rebate payments shouldn’t affect longer-run inflation expectations, and therefore shouldn’t really affect the outlook for inflation,” Dutta said. “I think that they want to engage in passive easing to ensure a credible liftoff from the zero lower bound,” he said. “And if you want to do that, then you have to wait longer, and accommodate the loosening of fiscal policy.”

On the negative outlook for GCC sovereigns as recovery could take up to 3 years – in a report co-authored by Thaddeus Best, Moody’s analyst

“Our negative outlook for GCC sovereigns reflects the coronavirus pandemic’s impact on oil revenue and our expectations for the erosion of fiscal strength experienced last year to extend throughout 2021,” said Best.

“Within the UAE, Abu Dhabi has largely pre-financed its budgetary requirements for 2021, although we expect additional issuance from Dubai and Sharjah. The $15 billion of bonds issued by Abu Dhabi in 2020 was in excess of budgetary needs and should cover 2021 requirements too. Debt issuance will remain the sole source of budget funding for Dubai and Sharjah, given the absence of SWF assets,” the report noted. “The vast majority of support efforts came from GCC central banks which rolled out substantial monetary stimulus and encouraged banks to offer payment holidays and other forms of relief for affected borrowers.”

“This is the problem with ETFs: You are basically offering a vehicle that gives the end-investor minute by minute liquidity, but the underlying assets can’t be sold in that period of time,” Maroutsos said. “That mismatch created an issue, and I think market makers certainly got spooked.”

“At the end of the day, would I say ETFs were a failure or a success? I think without the Fed backing, there could have been some real problems, not only in ETFs but in mutual funds,” Maroutsos said. “But the Fed saved the day; they introduced liquidity. I do think March was absolutely a worst-case scenario, no doubt. Fortunately we only had to live through that for about a week or so — but it was a scary time.” 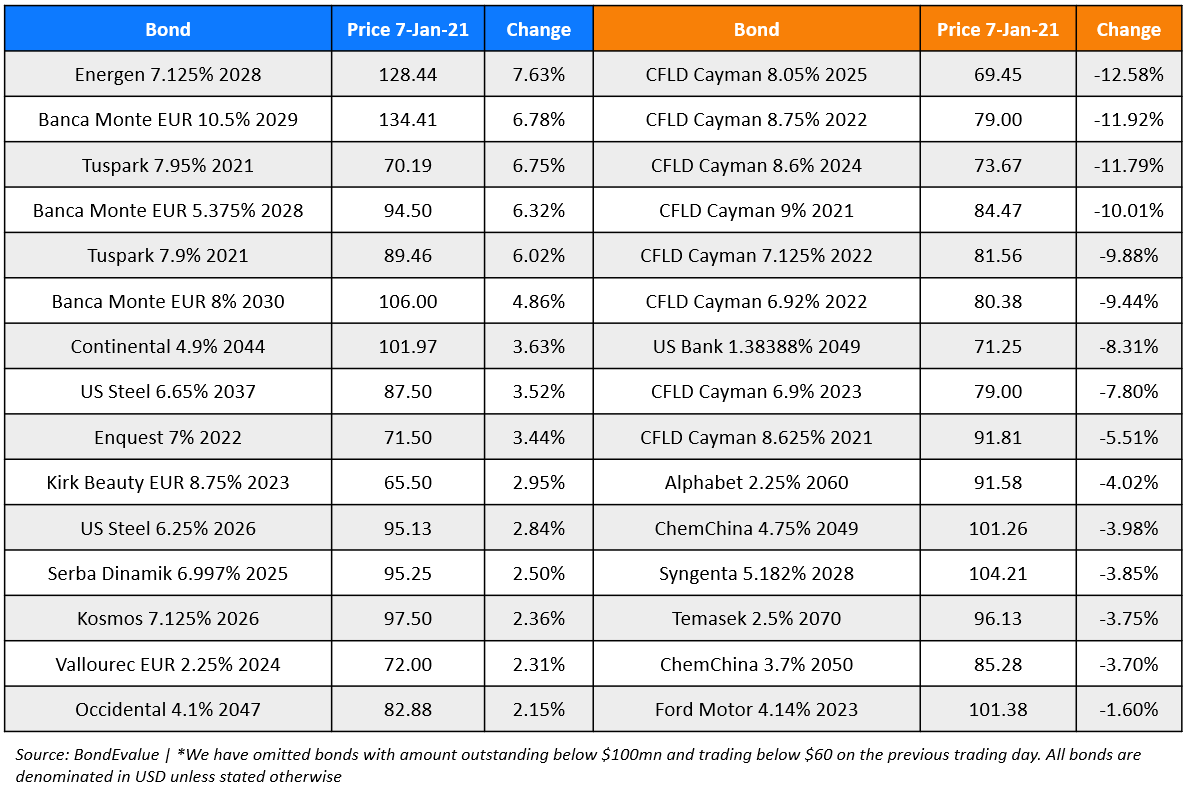