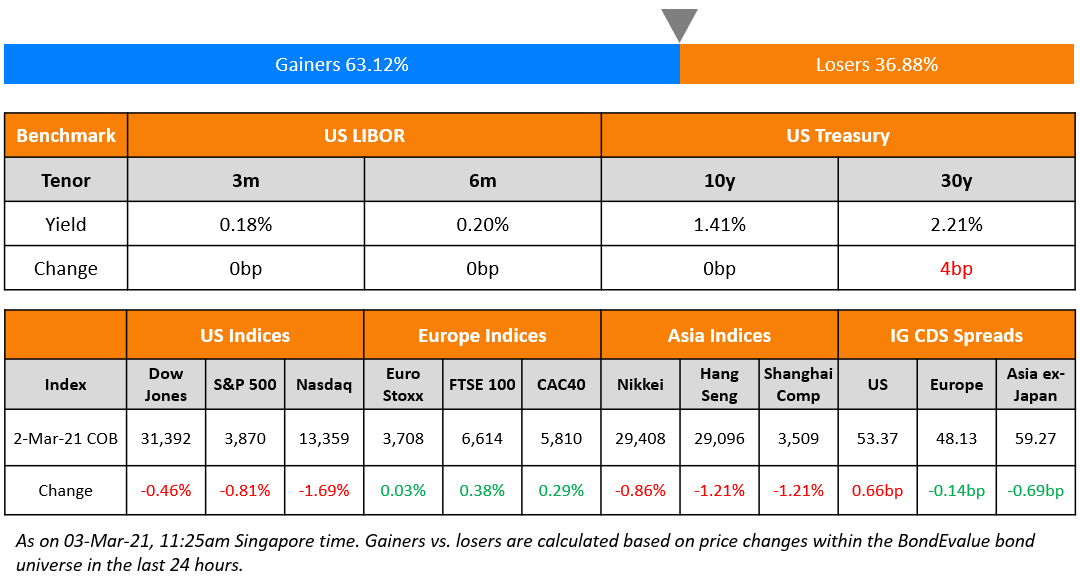 After a respite on Monday, US equities closed in the red on Tuesday with the S&P down 0.8% and Nasdaq down 1.7%. US 10Y Treasury yields eased 3bp with the risk-off tone. While Wall Street moved lower, Europe’s FTSE, DAX and CAC 40 rose 0.4%, 0.2% and 0.3%. After CDS spreads saw a sharp contraction on Monday, the moves were muted yesterday. US IG CDS spreads were 0.7bp wider and HY was a 4.3bp wider. EU main CDS spreads tightened 0.1bp and crossover spreads widened 1.3bp. China’s Caixin Services PMI came at 51.5 for February, slightly lower than the January’s print of 52. Asian equity markets are up 0.5% and Asia ex-Japan CDS spreads are tighter by 0.1bp. 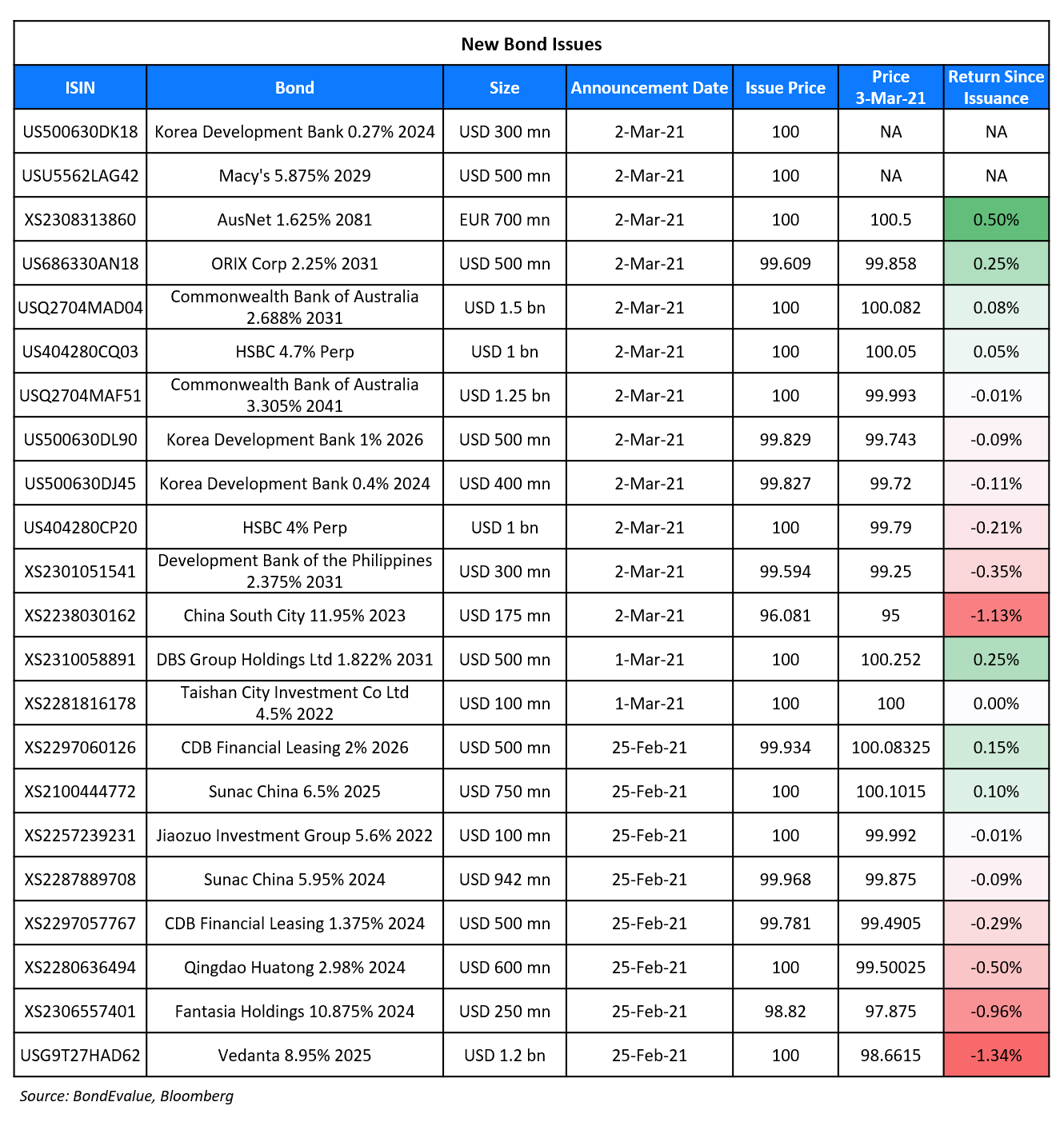 China South City Holdings raised $175mn via a 1Y11M senior bond at a yield of 14.375%, 12.5bp initial price guidance of 14.5% area. The bonds have an expected rating of B and received orders over $900mn, 5.1x issue size. Proceeds from the Hong Kong-listed company which develops and runs logistics and trade centers will be used for debt refinancing and general corporate purposes.

Development Bank of Philippines raised $300mn via a 10Y bond at a yield of 2.421%, or T+100bp, 25bp inside initial guidance of T+125bp area. The bonds have expected ratings of BBB and received orders over $1.1bn, 3.7x issue size. Proceeds will be used to refinance a $300mn bond maturing in March, for lending activities and general corporate purposes. The bank is 100% owned by the government of Philippines.

The senior bonds have expected ratings of Aa2/AA/AA-, in line with the issuer. Proceeds from the green portion will be allocated toward financing and/or refinancing new or existing projects from the eligible green categories under the policy bank’s sustainable bond framework. Proceeds from the fixed rate notes will be used for general operations, including extending foreign currency loans and the repayment of maturing debt and other obligations.

“Banks have taken very large reserves against losses and so have proven themselves pretty resilient,” Powell said. “And the result, what you see now, is a banking system that has higher capital than it did going into the pandemic, and particularly for the largest banks.”

“I am paying close attention to market developments — some of those moves last week and the speed of those moves caught my eye,” Ms. Brainard said.  “I would be concerned if I saw disorderly conditions or persistent tightening in financial conditions that could slow progress toward our goal.”

“In a way, it’s a statement of confidence on the part of markets that we will have a robust and ultimately complete recovery,” Powell said.

“We do have these other tools, and one of them is changing the composition of asset purchases,” she said.

“We are in the yield waiting room to see whether central bankers push back this week on the ambivalence we saw last week about interest rates,” said Hewson. “Potentially that was a mistake, giving the impression that the US did not really care about sharp rises in yields and sending the wrong message.”

“Financial markets are trading at high levels in Europe, the U.S. and other developed countries, which runs counter to the real economy,” Guo said.

On the risk of bubbles in foreign and property markets

Qu said that policymakers in China will “naturally pay more attention to the debt risks” now that the recovery was well on track, but added that “concerns about rising debt levels forcing Beijing to tighten fiscal and monetary policy are overblown”. 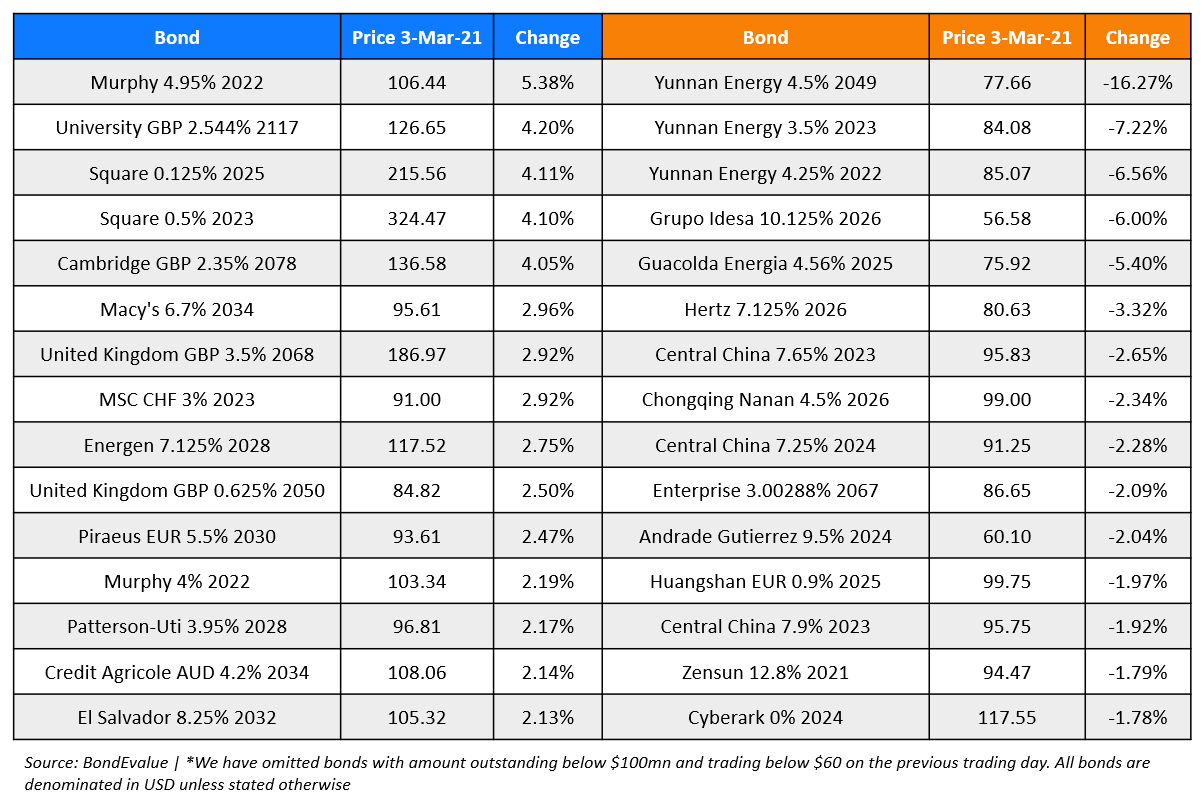