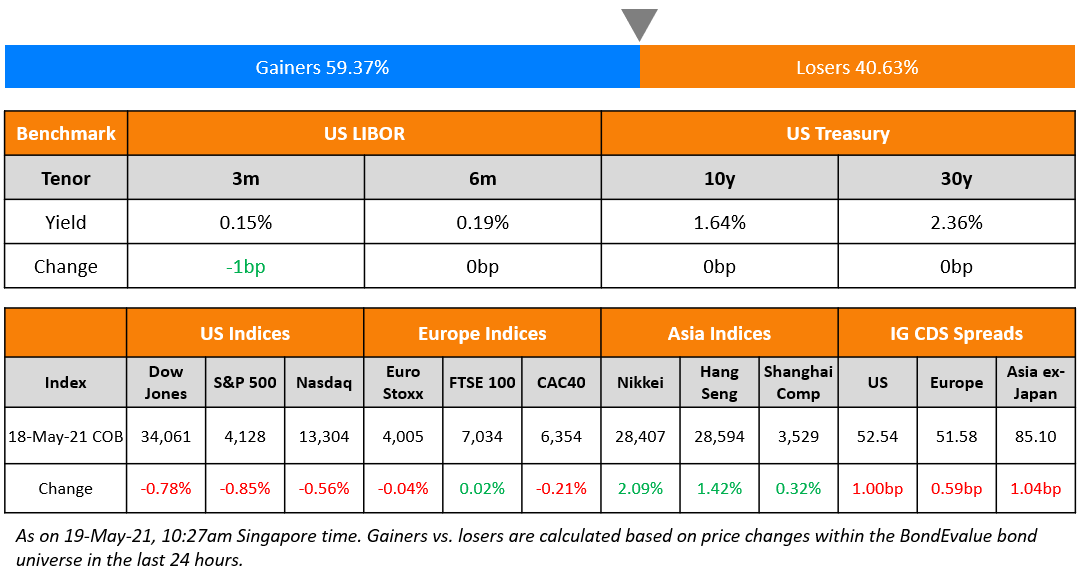 US markets continued lower with S&P and Nasdaq closing lower by 0.9% and 0.6% respectively driven by Energy and Tech stocks. Energy stocks ended lower on fears of increased Iranian oil supply which could lead to lower oil prices as the Iran nuclear deal nears finalization. Walmart and Macy’s reported encouraging numbers boosted by strong grocery and e-commerce sales. Apple was down 1.1% and Microsoft was down 0.9%. European equity indices were stable with the FTSE flat and DAX and CAC slipping 0.1% and 0.2%. US 10Y Treasury yields remained stable at 1.65% and US IG CDS spreads were 1bp wider and HY spreads were 3.2bp wider. EU main spreads were 0.6bp wider and crossover spreads widened 2.6bp. Asian equities have had a mixed opening. While Nikkei is down 1.1%, Hang Seng is up 1.4% with Asia ex-Japan CDS spreads tightening 1bp. 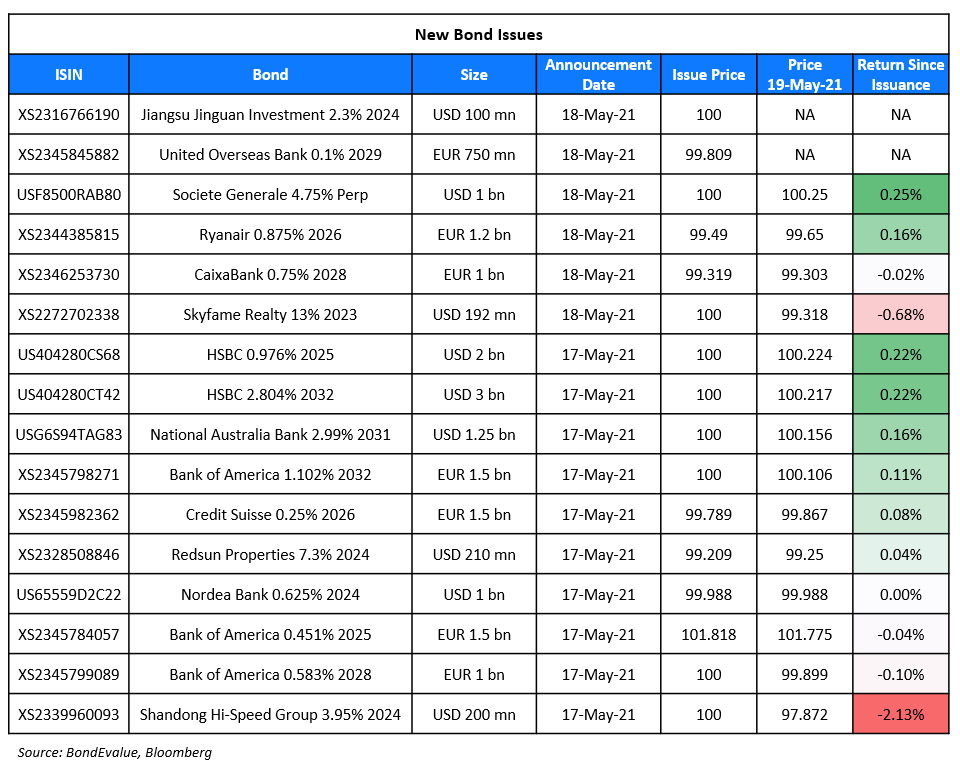 RyanAir raised €1.25bn via a 5Y bond at a yield of 0.98%, 30bp inside initial guidance of MS+120bp area. The bonds have expected ratings of BBB/BBB and received orders over €5.2bn, 4.2x issue size. Proceeds will be used for general corporate purposes.

Jiangsu Jinguan Investment raised $100mn via a 3Y credit enhanced bond at a yield of 2.35%, 5bp inside initial guidance of 2.4% area. The issuer of the bonds is Haixi Overseas Investment with a guarantee by Jiangsu Jinguan Investment. Bank of Jangsu Lianyungang branch will also provide a standby letter of credit. The bonds are unrated. Proceeds will be used for project investment and development, debt refinancing and working capital.

Solidarity-based bonds are a new type of structure where the bond issuer, investors and lead managers engaged in the transaction make concessions to channel extra funds to an environmentally and socially friendly project. IFR notes that the idea of this structure came from the 1980s in France when investors in mutual investments funds agreed to share a portion of their returns with selected charities.
Credit Agricole Taipei issued a 7Y solidarity based bond on Tuesday, the first of its kind with proceeds used to finance their Taipei branch’s green loan portfolio and specifically its exposure to renewable energy – offshore wind farm projects. Here, the additional funds are the sum of the transaction’s savings from investors’ concessions, issuer’s savings from JLM concessions and contributions from Credit Agricole Taipei branch.

On the accusation of Federal Reserve’s ‘dangerous complacency’ over inflation – Lawrence Summers, former US Treasury secretary
Summers said policymakers had “underestimated the risks, very substantially, both to financial stability as well as to conventional inflation of protracted extremely low interest rates”. “Policy projections suggesting that rates may not be raised for . . . close to three years are creating a dangerous complacency,” Summers said. “When, as I think is quite likely, there is a strong need to adjust policy, those adjustments will come as a surprise.”

“The primary risks today involve overheating, asset price inflation and subsequent financial excessive leverage and subsequent financial instability. Not a downturn in the economy, excessive unemployment and excessive sluggishness,” Summers said. “It is not tenable to assert today in the contemporary American economy that labour market slack is a dominant problem… Walk outside: labour shortage is the pervasive phenomenon.”

“It is not a reasonable place for policy to be in a world where the budget deficit has been expanded by 15 per cent by stimulative policy.” “I would rather see us go back to go back to a Fed that is concerned about pre-empting inflation, rather than a Fed [that] is concerned about pre-empting fears that it will be concerned about inflation.”
On the warning against big bets on inflation – Isobel Lee, head of global government portfolios at Insight Investment
“We’re mindful that this is an unprecedented situation — none of us have ever seen it,” said Lee. “So we need to be humble and appreciate that your judgment may be wrong.” “Post-financial crisis I certainly made the mistake of thinking that you could manage to ‘out-bear’ the forwards, so to speak, ahead of the Fed’s hiking cycle,” said Lee. “It’s actually very difficult, and I think the same thing is potentially true this time,” said Lee.
“It’ll take years to be able to normalize beyond the sort of 2-3% range.” “Pretty much every country has got a debt burden that corporates or households would struggle to service if yields rose by really quite modest amounts.” “Short of rapidly accelerating inflation, it’s difficult to see the circumstances whereby you get rate increases starting before the first half of 2023,” she said. “The era of low real yields and low returns actually may reassert itself sooner rather than later.”
On the warning that high-quality company debt may have nowhere to go but down – in a note by Srikanth Sankaran and team, Morgan Stanley strategists
“The combination of extended valuations, less favorable technicals and a slower pace of balance sheet repair suggests that credit markets have progressed to a mid-cycle environment.”

Zhangkai Huang, an associate professor at Tsinghua University
“The regulator and investors are kind of playing a game of chicken,” said Huang. “The regulator is saying there is going to be some serious reform in the financial system. The investors are saying, ‘I bet you don’t have the courage to let this default happen because there will be a crisis.’”
Li Xinran, a regulator at the Central Commission for Discipline Inspection
“The scale and amount of money involved in Lai Xiaomin’s case is shocking,” said Li. “This shows that the current situation of the fight against corruption in the financial sector is still serious and complex. The task of preventing and resolving financial risks is still very difficult.”
Larry Hu, head of the China economics desk at Macquarie Group
“Huarong has already become too big to fail,” he said. “It is no longer a fix to the problem, but the problem itself.”
Logan Wright, director of China research at Rhodium Group
“There is no playbook for this,” said Wright. “You’re pitting Beijing’s new rhetoric that they are cracking down against the assumption that they will ensure the stability of the system,” he said.
On Tencent Music’s acknowledgement of higher regulatory scrutiny – Tony Yip, chief strategy officer of Tencent Music
“In recent months, we have received increased regulatory scrutiny from relevant authorities, and have been actively cooperating and communicating with the relevant regulators.” “We are committed to comply with all relevant laws and regulations, including those related to anti-trust.” 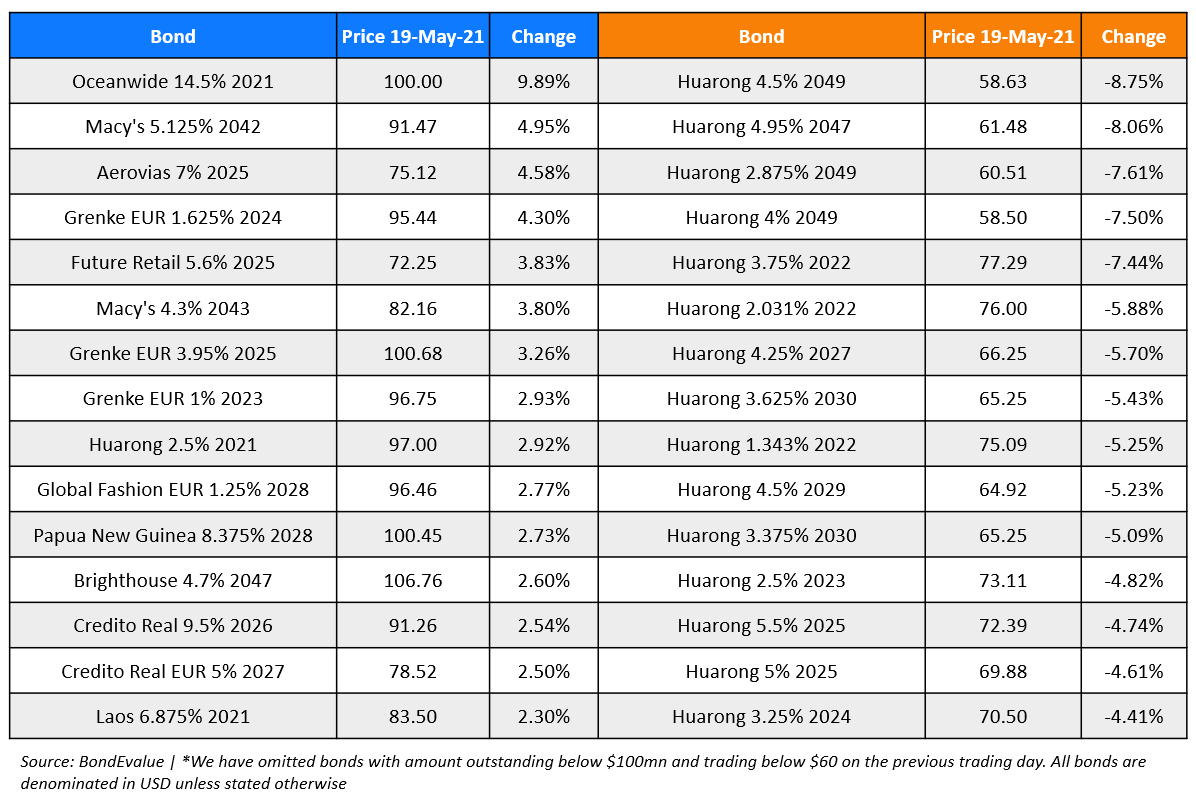