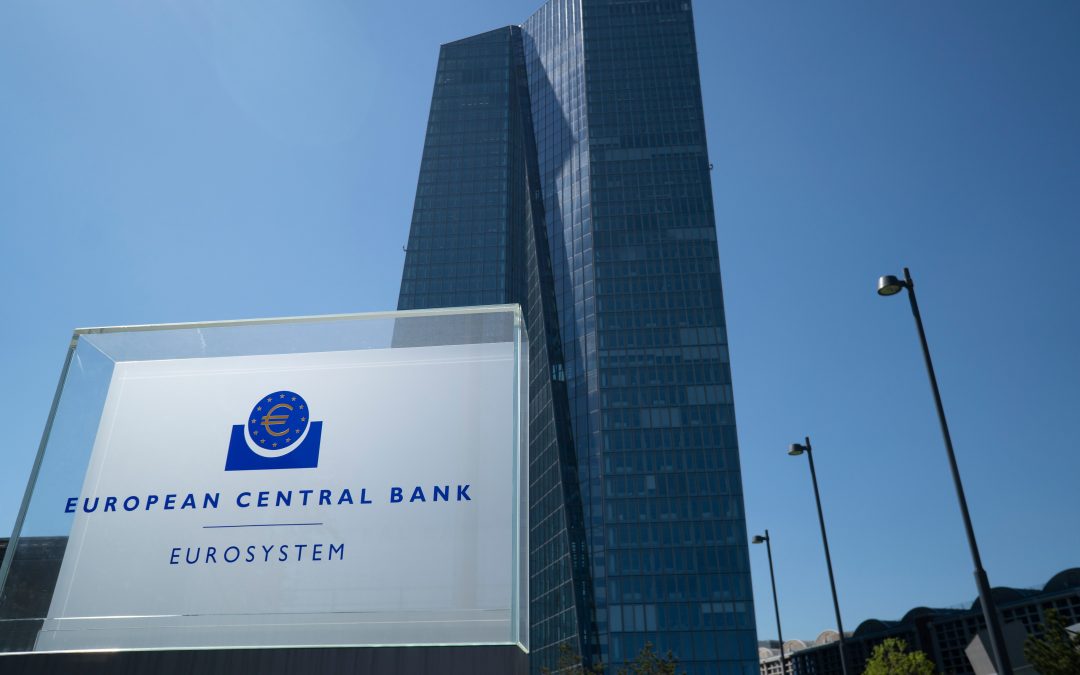 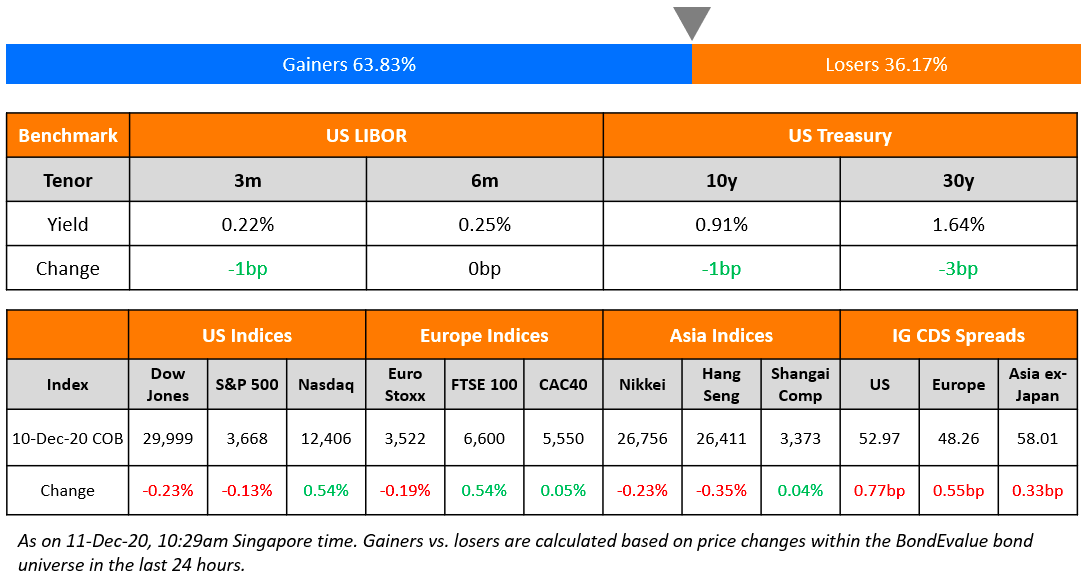 S&P ended marginally lower by 0.13% while Nasdaq was up 0.5%. The energy sector was the top gainer in the broad market, up ~3% with Brent Crude touching the $50 mark for the first time since March. US 10Y yields moved lower 1bp as the weekly jobless claims jumped by 137k to 853k, well above the 725k forecast highlighting slowing labour market recovery. US Treasury Secy. Mnuchin said that a ‘lot of progress’ has been made on the Covid relief bill. US consumer price inflation (CPI) and core CPI rose 0.2% MoM vs expectations of an increase by 0.1% each. S&P Dow Jones Indices yesterday said that it would remove 21 Chinese companies from its equities and bond indices, including Hikvision and SMIC, following a Trump administration order prohibiting the purchase of certain Chinese securities by U.S. investors. US IG CDS spreads widened 0.8bp and HY widened 2.8bp to close above 300bp. EU main CDS spreads and crossover CDS spreads were wider 0.6p and 8.7bp respectively. Asia ex-Japan CDS spreads were 0.3bp wider and Asian equities have opened lower ~0.3%.

Sign up for the upcoming webinar on Navigating the Bond Market by Leveraging the BEV App at 4PM Singapore/HK time on December 16. The module is specially curated to help the users exploit the BondEvalue app to manage their bond portfolio on the WebApp as well as the Mobile App. It will cover the following topics. 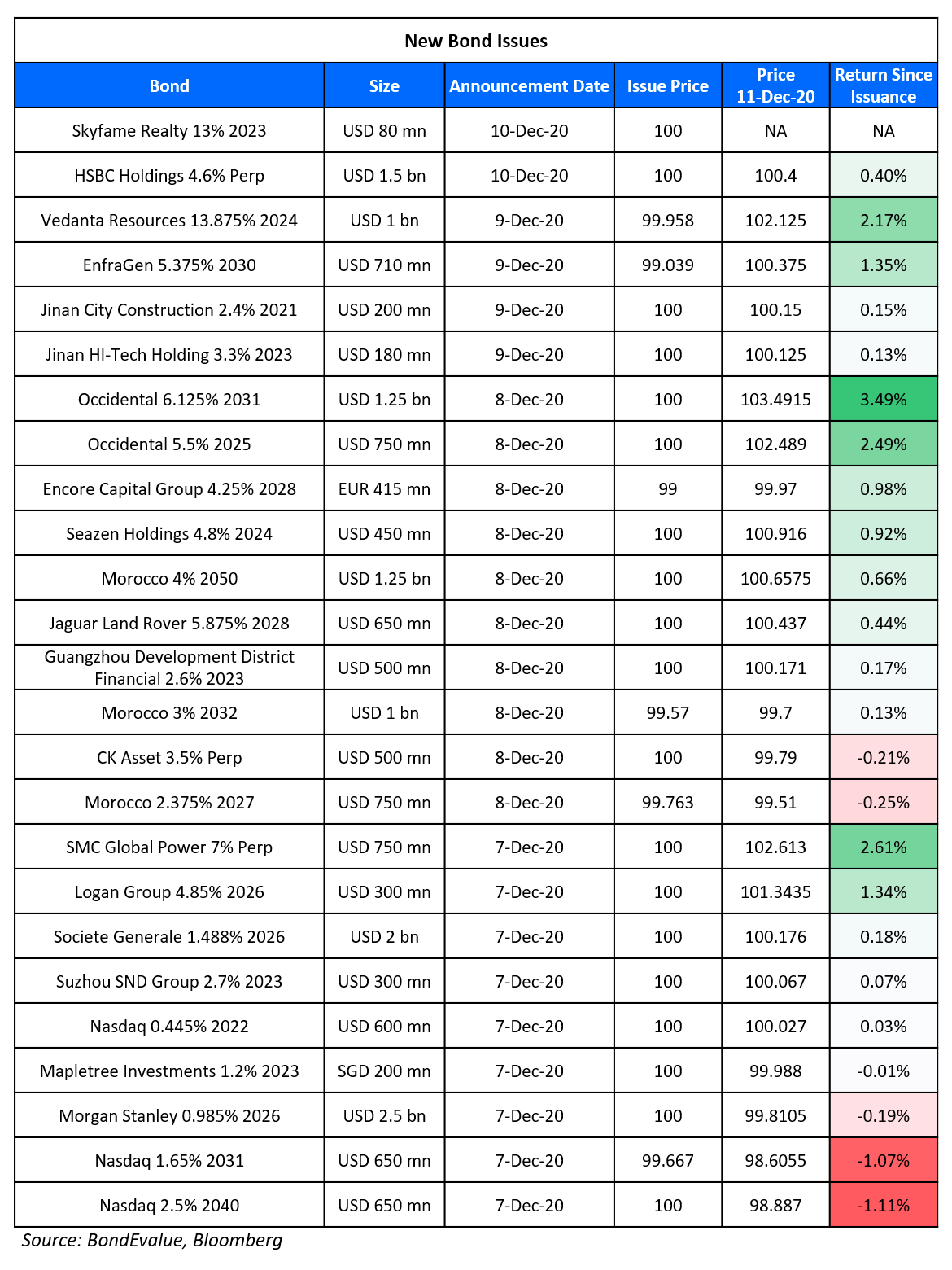 The European Central Bank (ECB) kept its key rates and monthly asset purchase program (APP) purchases at €20bn ($24.3bn) unchanged. However, it decided to make some changes to its overall monetary policy as listed below:

ECB President Lagarde said “If favorable financing conditions can be maintained with asset purchase flows that do not exhaust the envelope over the net purchase horizon of the PEPP, the envelope need not be used in full…The extension of our PEPP purchases over a longer horizon reflects the prolonged fallout from the pandemic for the economy and inflation.” Berenberg economist Florian Hense said “The ECB has delivered on its promise to recalibrate its instrument” and added that “policy package is broadly in line with our and market expectations.”

In related news, with the overall easing conditions across the Eurozone, Spain issued a 10Y bond at a negative yield for the first time.

HSBC raised $1.5bn via a perpetual non-call 10Y (PerpNC10) AT1 bond at a yield of 4.6%, 65bp inside initial guidance of 5.25% area. The SEC-registered CoCo bonds have expected ratings of Baa3/BBB. Proceeds will be used o redeem all of its 1.45mn 6.20% Non-Cumulative Series A Dollar Preference Shares,  represented by American Depositary Shares. Any proceeds in excess of the redemption amount will be used for general corporate purposes and to strengthen the bank’s capital base. The bonds will have a fixed 4.6% coupon until the reset date. The coupon reset is at year 10.5 (June 2031) and every five years thereafter at 5Y UST + 364.9bp. The bonds are callable from December 17, 2030 to June 17, 2031. The CoCos have a capital adequacy trigger event if the consolidated CET1 ratio falls below 7% without applying transitional arrangements. This adds to a list of issuance of bonds by big banks over the last couple of weeks which included perps from Credit Suisse and Citigroup. HSBC’s USD 6.375% Perps were down 0.3 to 109.207, yielding 4.02% while their 6.5% Perps callable in March 2028 was flat at 111.7, yielding 4.59%.

Reliance Upgraded to BBB+ With Stable Outlook by Fitch

Indian Reliance Steel & Aluminium has been upgraded to BBB+ from BBB with a stable outlook by Fitch Ratings. Reliance’s senior unsecured notes have also been upgraded to ‘BBB+’ from ‘BBB’. The rating is two levels above the sovereign rating of India indicating the strong business model of the company. The rating agency said “Reliance has continued to demonstrate continued strong performance and resilient FCF through business cycles as demonstrated most recently by the business performance through the pandemic, generating FCF of roughly $685mn in the first three quarters of 2020.” The stronger investment grade rating are based on the company’s operating model, stable operating margins, strong working capital & financial policy and its position as an industry leader. Salient features of the rating action are as follows.

UPL’s bonds dropped yesterday after a whistleblower whom ET Prime identified as a board member, alleged that the founders of the company have siphoned off money, according to a report by the Economic Times. According to the report which also cited documents provided by the whistleblower, UPL entered into rent deals with a shell company owned by its employees and paid millions of rupees in rent for properties held by the latter, which was earlier owned by UPL chief Shroff himself. UPL denied allegations in a press release while CEO Jaidev Shroff told news media that the report was “completely malicious” and that the board did not receive a whistleblower complaint. UPL is one of the top agriculture solutions companies worldwide, with a portfolio spanning biologicals and traditional crop protection solutions. UPL’s shares closed 11.3% lower while their USD 5.25% Perp and 4.625% 2030 bonds were down 3.5% and 2.6% after the news. The bonds have slightly recovered today and are currently up 0.2 and 1.4 points to 97.34 and 107.74, yielding 4.56% and 3.65% respectively. 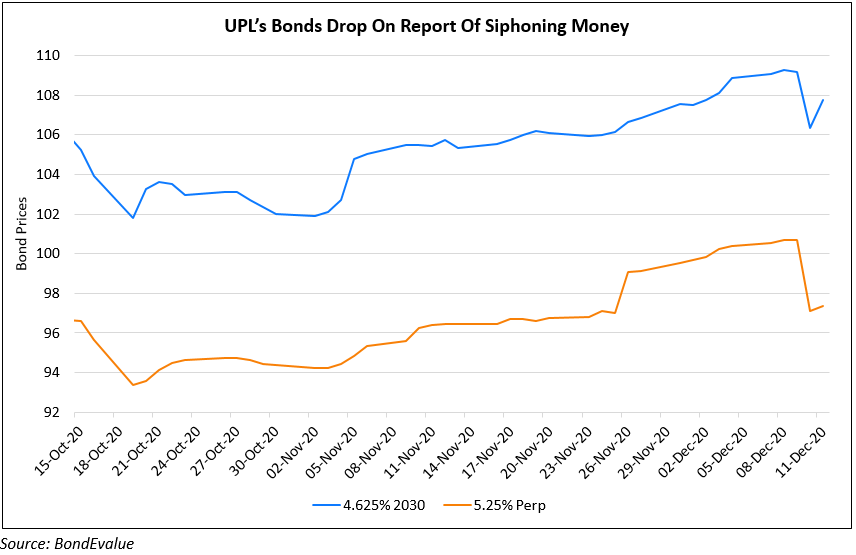 Addleshaw Goodhard (AG), a U.K.-headquartered law firm advised holders of Tsinghua Unigroup’s $450m dollar bond due 2020 on Thursday to ask a Hong Kong court to recognize their debt claims after Unigroup said it will default, according to sources. AG said that during a call with bondholders, owners holding a combined $70mn of the note with keepwell deeds had reached out to it to seek protection. The law firm called on more bondholders to join the effort as taking such action needs participation from holders representing at least 25% of the bond’s value. A keepwell provision is a legal agreement between a parent and a subsidiary company to ensure solvency and financial stability of the subsidiary for the duration of the agreement. However, it is important to note that that keepwell deeds are not a guarantee that the parent company will support the subsidiary in the event of a default. Whilst not a surprise, Tsinghua Unigroup announced that it will not be able to repay its $450mn 6% dollar bonds due yesterday issued by Unigroup and guaranteed by Tsinghua International. Tsinghua’s 4.75% dollar bond due 2021 fell 6.6% to 29.4 yesterday and is currently at 29.97.

US Federal Communications Commission (FCC) has initiated proceedings to revoke and terminate China Telecom (Americas) Corporation’s authorizations. The proceedings will determine whether to end China Telecom’s authority to provide domestic interstate and international telecommunications services within the US. The FCC said in a press release that “The protection of national security is an integral part of the Commission’s responsibility to advance the public interest, and today’s action seeks to safeguard the nation’s telecommunications infrastructure from potential security threats.” The action comes after several agencies had recommended the revocation and termination of the agency in April 2020. According to FCC, Chinese Communist Party yields substantial control over China Telecom’s management and business operations. It also said that China Telecom Americas made inaccurate statements to US authorities about its record storage policies. A show cause notice was issued to China Telecom earlier in April this year.

The FCC also upheld a Public Safety and Homeland Security Bureau’s Order designating Huawei as a threat to national security and communications infrastructure. FCC said that carriers would now not be allowed to use the Commission’s Universal Service Fund to purchase network equipment or services from Huawei. In a statement, FCC Chairman Ajit Pai summarised the following.

Japanese conglomerate Softbank continues to take major business decisions. The conglomerate immensely profited from its DoorDash IPO which hit a market capitalization of $60bn resulting in a $11.2bn profit to Softbank a day after Softbank was rumoured to go private with a slow burn buyout. DoorDash shares gained 86% on the first day of trading. DoorDash has 50% share of the US market food-delivery and Softbank owns 20% of DoorDash post IPO. Softbank’s Vision Fund had invested in DoorDash in 2018 and 2019. “DoorDash plus yesterday’s news about the MBO have seen investors rushing to get a piece of SoftBank,” said Justin Tang, head of Asian research at United First Partners in Singapore. The Masayoshi Son company has also soared 75% this year leading to a market valuation of more than $165bn. The group is also all set to sell its robot maker Boston Dynamics to Hyundai Motors for KRW 1tn ($917mn). The acquisition is likely to be finalized today at a board meeting. Boston Dynamics was initially formed by Massachusettes Institute of Technology which was acquired by Google in 2013 and further by Softbank in 2017. Hyundai Motors has increased its investment in robotics and is likely to invest upto KRW1.5tn ($1.4bn) in the technology. Softbank’s bonds were largely stable. It 6% perp yielding 7% was trading at 97.63 cents on the dollar in the secondary market.

Yield to Call (YTP) is a return metric applicable to puttable bonds and refers to the total return that a bondholder would receive if the bond is held till the put date, provided that the issuer does not default. Bondholders generally receive a lower expected coupon rate or yield to put, because they are able to sell it back to the issuer and reinvest their capital elsewhere (at higher rates). YTP calculation is similar to the YTM calculation except that the maturity date is replaced by the put date and the redemption value (stated as a percentage of par) is replaced by the put price. Chinese property developer Skyfame Realty (Holdings) raised $80mn via 3Y non-put 2Y (3NP2) senior bonds at final guidance of 13% yield to put.

On ECB boosting crisis support with caveat on not using it all up – Christine Lagarde, European Central Bank President

The additional envelope of 500 billion euros in bond-buying  “need not be used in full … if favorable financing conditions can be maintained.” Lagarde said. “Looking ahead, the news of prospective roll-outs of vaccines allows for greater confidence in the assumption of a gradual resolution of the health crisis,” she said. “However, it will take time until widespread immunity is achieved.”

“The government has been gradually breaking implicit guarantees of weak SOEs,” said Wu.

“We should see rising refinancing and repricing risk for weaker state-linked firms, which will lead to a rising default rate,” said Chan. “Bailouts are unlikely, in our view, as China aims to restructure, consolidate and eliminate zombie-like state-linked firms unless it leads to systemic risk.” “The next default event to watch out for could be its parent company Tsinghua Holdings, but their bonds are already trading at distressed levels so it’s being priced in,” Chan said. “This event will prompt rising concern about onshore stress spilling over into the offshore market.

“The economic contraction in 2020 will further exacerbate leverage ratios and magnify the risks of GRE liabilities crystallising on government balance sheets,” it said.

“The green bond market has just passed $1 trillion since inception and we expect next year’s issuance to be close to $500 billion,” SEB analysts said in the report.

On American investors edging out overseas buyers in the share of US Treasury issued in 2020 – John Canavan, lead analyst for Oxford Economics

“The ability to absorb the record Treasury issuance has come down to [U.S.-based] investment funds,” said Canavan. 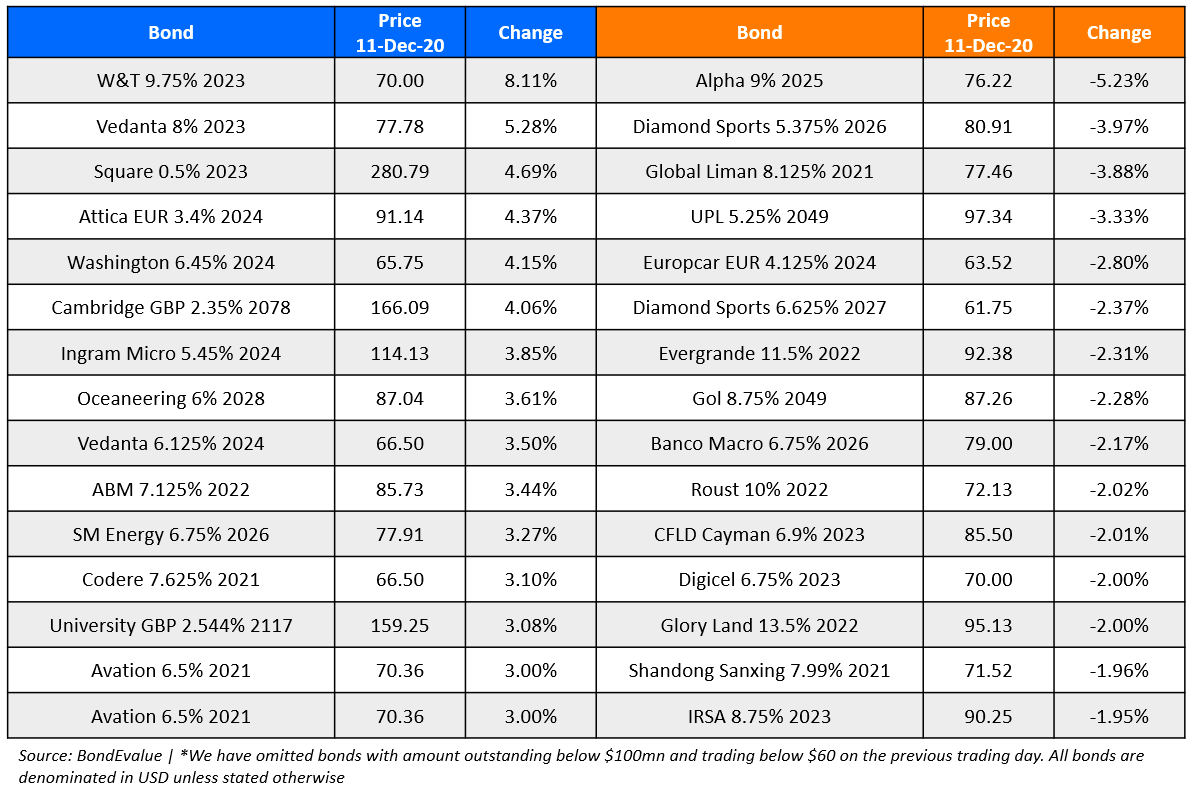