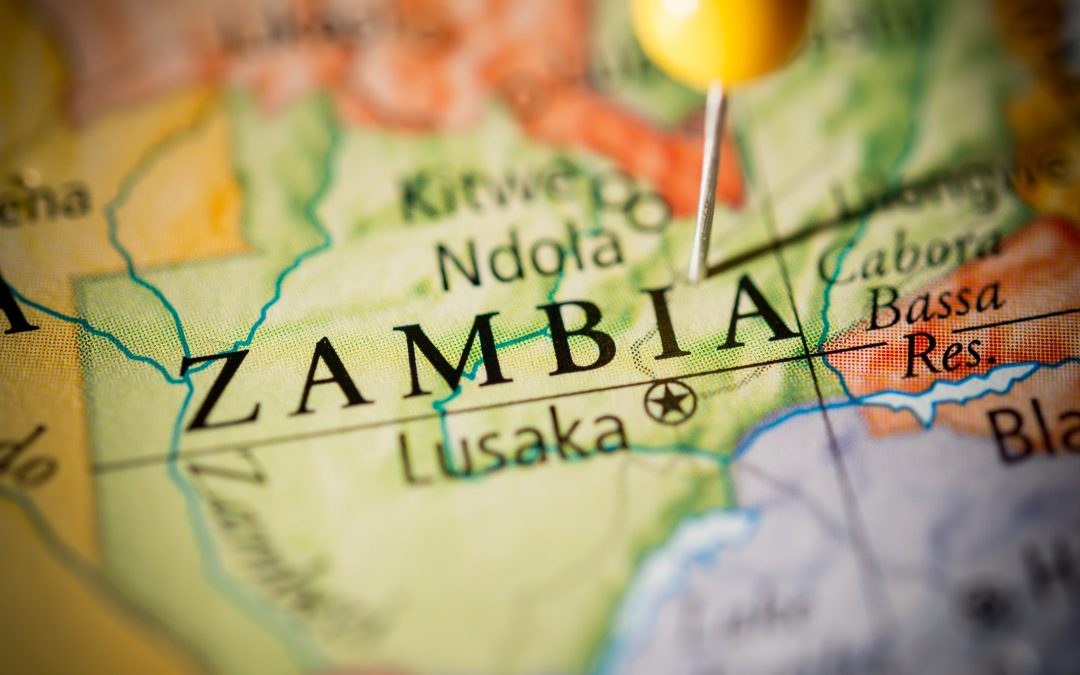 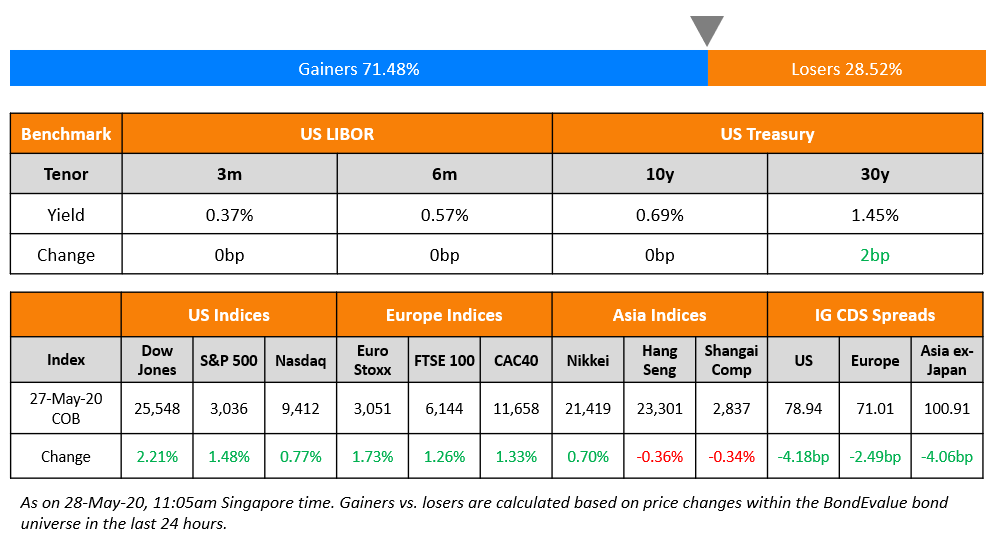 Markets have shrugged off heightened Sino-American tensions to close higher overnight across the US and Europe. The trump administration has stated that it no longer views Hong Kong as autonomous, but markets seem more focused on the speed of the economic recovery and hopes of a vaccine. Dollar bond deals in Asia have picked up steam with ~$10bn worth of new bonds priced yesterday including a $6bn deal from Tencent. Yesterday saw the highest daily issuance in the region since the start of the coronavirus outbreak. Investment Grade CDS spreads continue to grind lower. Asian markets are opening higher this morning. 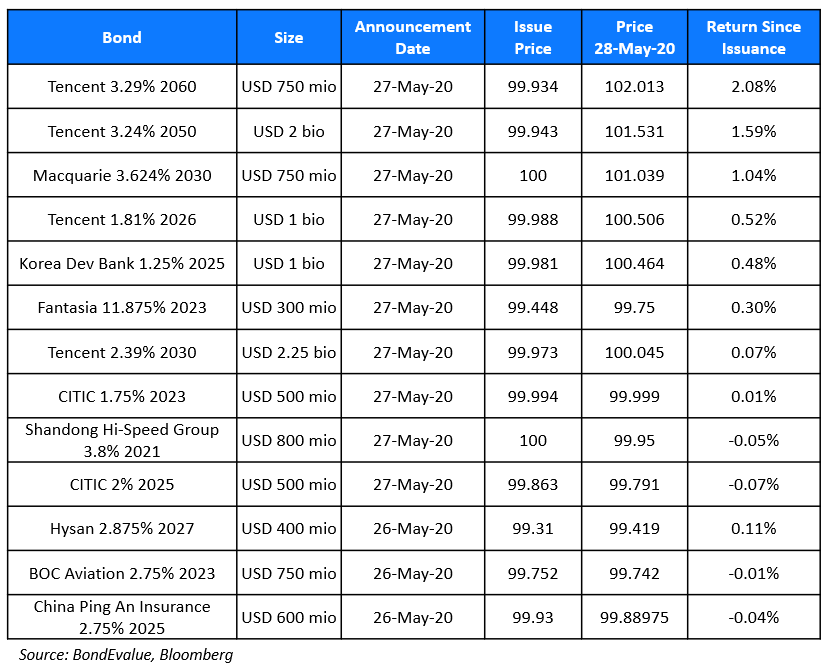 Fantasia raised $300mn via 3Y non-call two-year bonds at a yield of 12.1%, 40bp inside initial guidance of 12.5% area. The bonds are expected to have a rating of B3 by Moody’s. Orderbook reached $1.2bn, 4x issue size at the time of final price guidance.

Chinese state-owned infrastructure company Shandong Hi-Speed raised $800mn via 363-day bonds at a yield of 3.8%, 35bp inside initial guidance of 4.15% area. The bonds will be issued by Coastal Emerald and guaranteed by China Shandong Hi-Speed Financial Group and have an expected rating of BBB+ by Fitch. Orders exceeded $3.2bn, 4x issue size, at the time of final price guidance,

All the issuers paid a premium to their previous comparable bond issues. The table below shows details of the recent comparable deals done by these issuers. 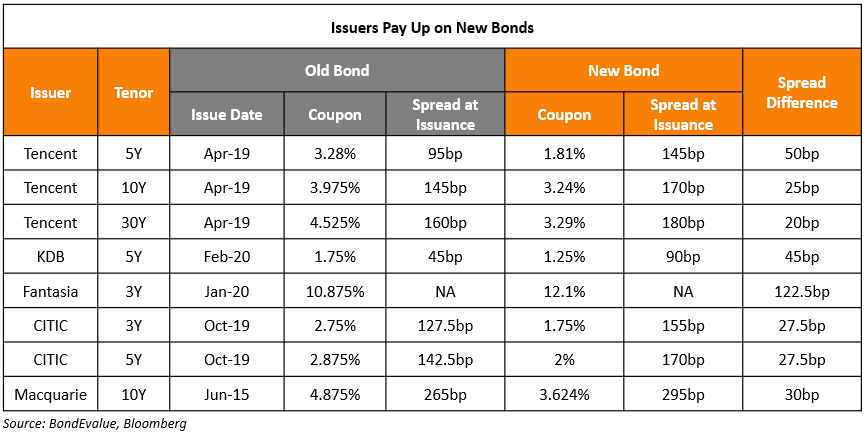 European Commission President Ursula von der Leyen is urging a transformation of the EU’s central finances that will allow it to raise unprecedented sums from the capital markets and hand out the bulk of the proceeds as grants to hard-pressed member states. Her plans, presented on Wednesday afternoon, follow a high-profile joint proposal from Germany and France, which last week endorsed a recovery fund of €500bn. The commission’s proposals match that ambition and add €250bn of further borrowing intended to fund loans to member states. On Wednesday morning Christine Lagarde, European Central Bank president, warned that the eurozone’s economy would shrink by 8 to 12% this year, a recession twice as deep as the one that followed the 2008 financial crisis.

American retailer Macy’s raised $1.3bn via 5Y bonds at a yield of 8.375%. The company said that the bond offering is expected to close by Jun 8 and is subject to the closing of a new asset-based credit facility and some other conditions. The issuance comes a week after it warned of a $1bn operating loss for the first quarter of 2020. The new deal met with strong investor demand and sentiment as the bonds received orders of ~$6bn and the company’s shares traded up by 19.6% on Wednesday. The bonds, issued at par, have inched higher since issuance and are currently trading at 102.75 on the secondary market. This is the first bond issued by Macy’s in five years. It last raised $500mn via 6yr bonds in 2015 at a yield at issuance of 3.471%.

After Argentina, Zambia Is Next In Focus for Creditors of Distressed Debt

After Argentina defaulted on its debt this month, Zambia is seen as the next big test for whether debt-distressed countries can secure deals with their creditors amid the pandemic’s market turmoil. Zambian president Edgar Lungu’s government has hired Lazard to advise on restructuring the cash-strapped southern African nation’s $11bn foreign debts that have threatened to become Africa’s first sovereign default during the coronavirus pandemic. Lazard is also advising Argentina’s government on its current debt restructuring talks with creditors. Prices of Zambia’s dollar bonds have collapsed this year as a sharp fall in copper prices and a slide in the country’s currency against the US dollar have put pressure on its ability to repay debts that were seen as untenable even before the health crisis. Zambia’s economy, once one of Africa’s fastest growing, is forecast to contract in 2020 for the first time in years. A comparison of Zambia’s dollar bond prices and credit rating to a few other African nations as follows. 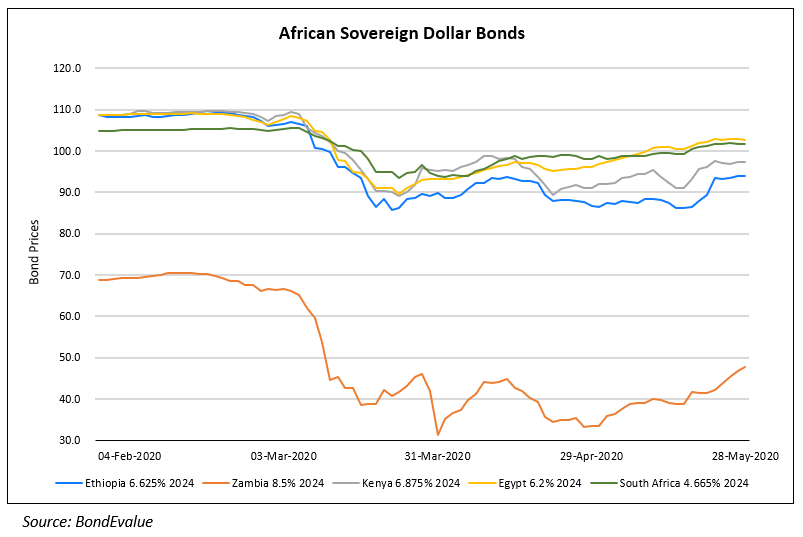 The Central Bank of Mexico predicted that the country’s economy would shrink between 4.6% and 8.8% in 2020 on the back of a poor first quarter. The central bank also predicted a loss of 800,000 to 1.4 million jobs during the year. As per the state’s statistics, the economy was doing poorly even before the onset of the effects of the pandemic. This led to a gloomier outlook for the country compared to other economies, The private investment in the country had fallen by 8.6% in February. Fitch had cut the rating of the country to one notch above junk in April while Moody’s and S&P retained their ratings. The economy is highly dependent on the US economy and a US resurgence would have a positive impact on the economy of Mexico. The country intends to gradually reopen from June 1. Banxico has also been actively taking measures to boost the liquidity by 3.3% of 2019 GDP. The GDP was predicted to grow between 0.5% and 1.5% before the lockdown due to the pandemic. The predictions of the Central Bank are in variance to the optimistic prediction of President Andres Manuel Lopez Obrador.

Yield Curve Control targets long term interest rates by buying or selling long term bonds to keep the interest rate from rising above it’s target. This is a measure taken to simulate economic growth. Yield curve controls are also sometimes referred to as Interest Rate Pegs. The most recent example of the YCC being implemented is by the Bank of Japan (BOJ). In 2016, BOJ shifted from Quantitative Easing to a YCC policy, where they pegged the yield on 10-year Japanese Government Bonds (JGB) to fight persistently low inflation.

“Yield-curve control, which has now been used in a few other countries, is I think a tool that can complement -– potentially complement –- forward guidance and our other policy actions.”..” So this is something that obviously we’re thinking very hard about. We’re analyzing not only what’s happened in other countries but also how that may work in the United States.”

On Hong Kong’s autonomy – US Secretary of State Mike Pompeo

“No reasonable person can assert today that Hong Kong maintains a high degree of autonomy from China, given facts on the ground,” .. “While the US once hoped that free and prosperous Hong Kong would provide a model for authoritarian China, it is now clear that China is modelling Hong Kong after itself,” .. “I certified to Congress today that Hong Kong does not continue to warrant treatment under US laws in the same manner as US laws were applied to Hong Kong before July 1997,” 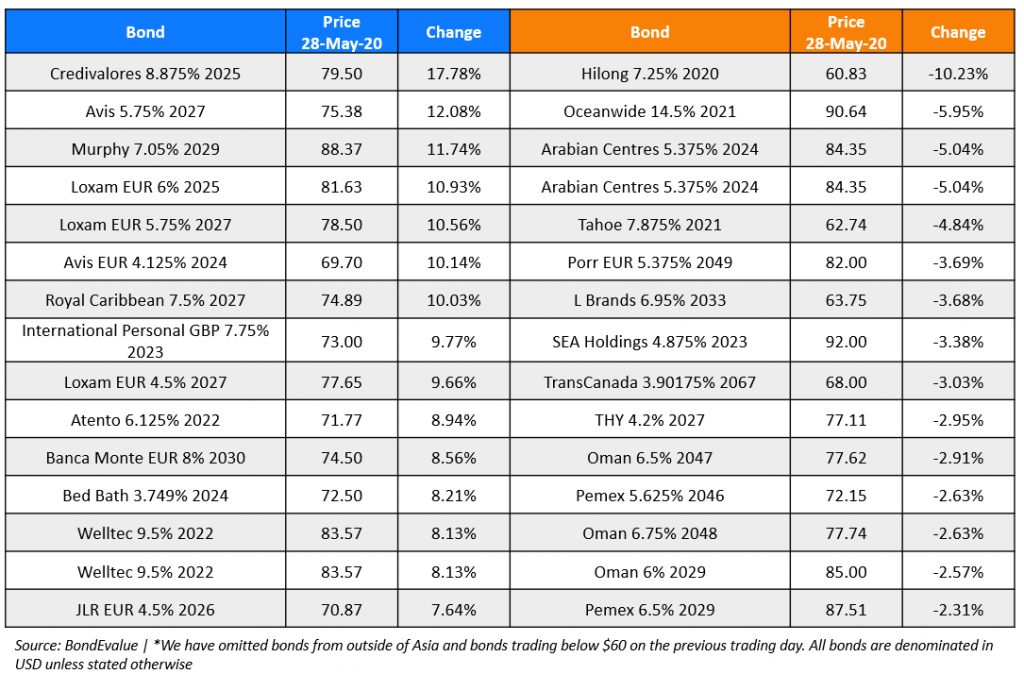