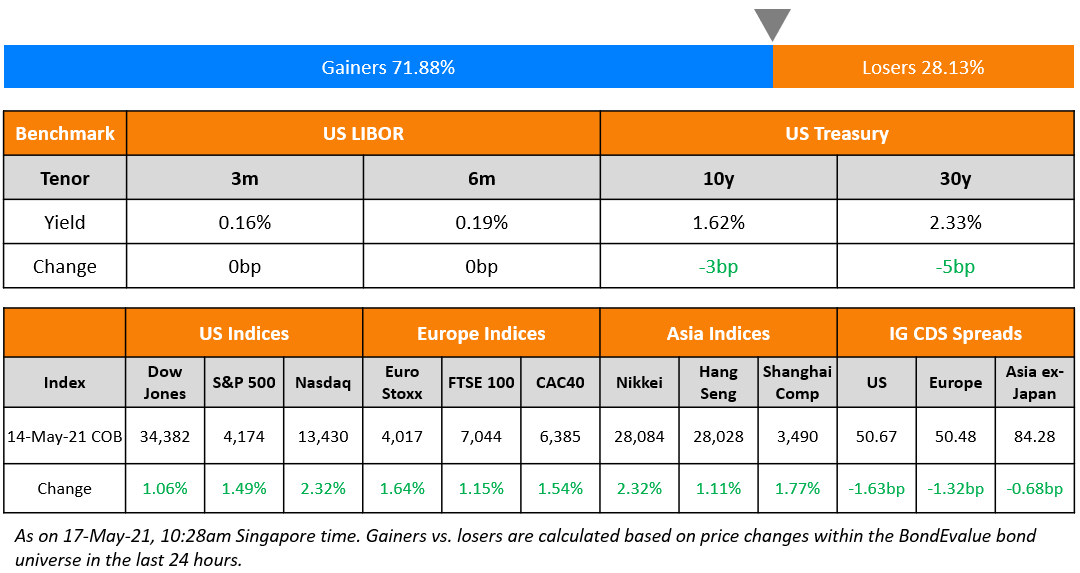 S&P and Nasdaq both rose for the second day in a row and closed higher by 1.5% and 2.3% respectively on Friday. Even though growth and technology stocks stabilized after declining in the beginning of last week, S&P and Nasdaq were down 1.1% and 2.2% down on a weekly basis. US 10Y Treasury yields declined for a second day to close at 1.64% after disappointing retail sales in the US. The week will see the release of FOMC minutes on Wednesday. US IG CDS spreads tightened by 1.6bp and HY spreads tightened by 7.1bp. EU main and crossover spreads tightened 1.3bp and 7.2bp. Asian equity indices had a mixed start while Asia ex-Japan CDS spreads were 0.7bp tighter. 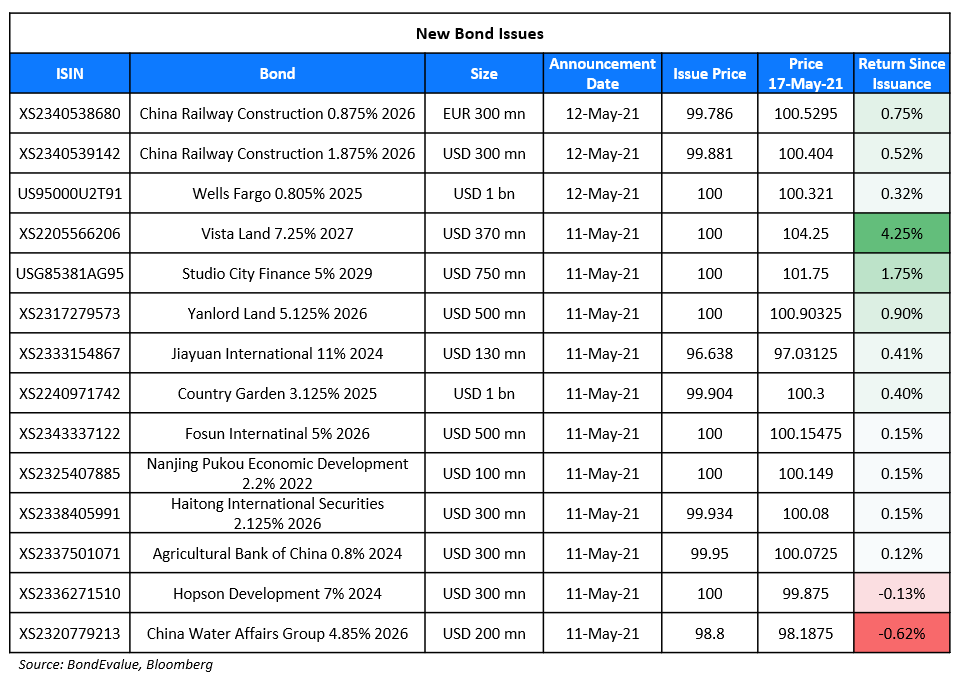 Brazilian meat company JBS raised $500mn via a 10Y bond at a yield of 3.75%. JBS is rated BB+ by S&P, and the notes are expected to have the same rating. Barclays, BMO, RBC and Truist were the joint bookrunners on the deal. Proceeds will be used to cover the planned acquisition of Vivera, a plant-based food manufacturer for $414mn. If the acquisition does not go through, proceeds will be used for general corporate purposes. 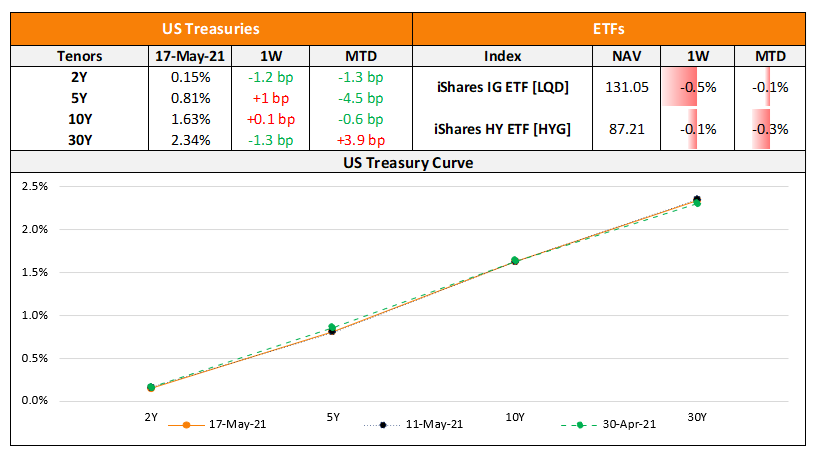 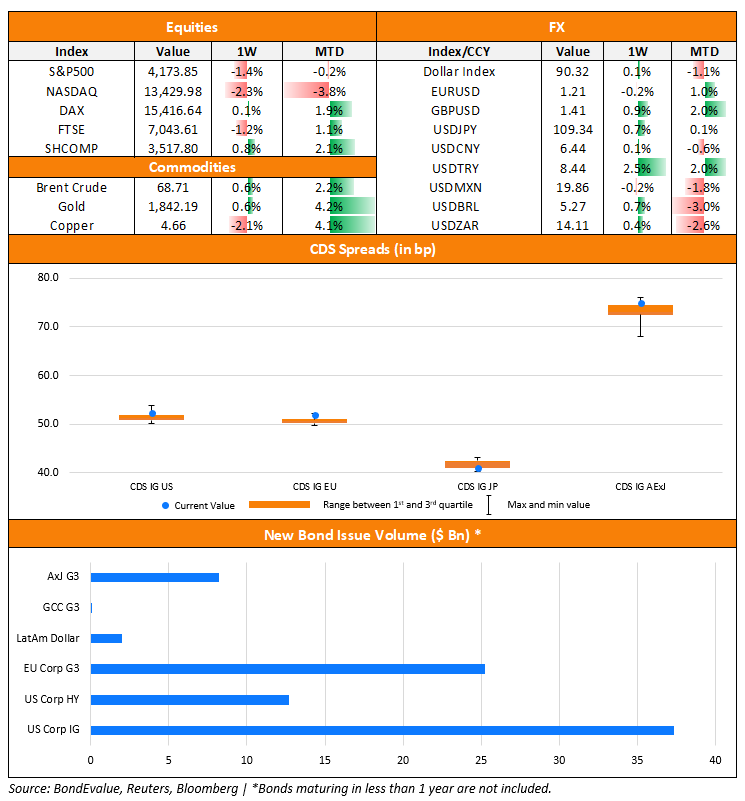 Risk Parity refers to an asset allocation strategy wherein the allocation or weight assigned to each asset class is defined based on the risk each of them contribute to the overall portfolio, rather than the return. Let’s take an example of the traditional 60:40 portfolio. Here, the 60% allocation to equities contributes to 90% of risk of the overall portfolio given that equities have historically been 3x more volatile vs. fixed income securities. This portfolio is thus very concentrated towards equities – the return on equities during the period would dictate the return on the total portfolio. The risk parity approach avoids this concentration of risk with the construction of more diverse, risk balanced portfolios. The risk parity strategy builds off of the Modern Portfolio Theory (MPT), which promotes the construction of portfolios that maximize expected returns for a given level of risk. However, as opposed to the MPT, risk parity allows for the use of leverage and short selling.

On risk parity upended as stocks and bonds increasingly move in lockstep
Inigo Fraser Jenkins and team, Sanford C. Bernstein strategists
“The deeply negative correlation of stocks and bonds that has persisted for most of the last two decades is not a permanent feature of markets but in fact is contingent on a certain macro regime of low and not volatile inflation,” the strategists wrote. “That regime may be coming to an end.”
Charlie McElligott, Nomura Holdings strategist
“Any semblance of an inflation impulse will always act to stoke volatility — as market participants had become utterly cynical as to the prospects for a sustained ‘hot’ economy and its implications for interest rates,” McElligott wrote. “You’re now combustible for brief but violent deleveraging and momentum shocks.”
On corporate bond downgrades by China rating agencies tripling
Charles Chang, greater China country lead at S&P Global Ratings
“If that regulatory push is working, you should see an increase in timely action that flags underlying distress . . . that doesn’t mean there is an increase in distress, it just means that there is an increase in the indication of that distress,” Chang said. “China’s default rates would need to double or triple to reach the level that you see in the US, in Europe and emerging markets,” he said.
Xiaoxi Zhang, an analyst with Gavekal Dragonomics
“The government wants to take advantage of the strong growth momentum of the post-Covid rebound to deal with structural problems,” she wrote. “But it’s also because the current tightening of credit and withdrawal of supportive economic policies could cause broader financial stress if hidden debt is not handled well.”
On the growing number of ESG investors focusing on emerging markets
Thede Ruest, head of emerging debt markets at Nordea Bank’s investment management unit
“We felt it was a compelling idea.” He expects the strategy to deliver “slightly better yield without too much risk-taking,” and it will “make a difference where it arguably will matter more.” “What we always look for is to have credibility in the issuer, we want to see credible plans in the whole transition of the issuer,” Ruest said.
Burton Flynn and Ivan Nechunaev, fund managers at Terra Nova Capital
“Of course we like best-in-class ESG companies,” they said. “But we really love to invest in companies with opportunities for improvement.” “Investing only in companies that have high ESG standards doesn’t fix problems,” they said. Companies with “stellar ESG reputations” tend to be expensive, which could add to the risk of an “ESG bubble.”
Karine Hirn, founding partner and chief sustainability officer at East Capital
“You want to invest in companies that are improving in terms of ESG.”
On emerging-market investors turning more selective on expectations of higher inflation
Tai Hui, chief Asia market strategist at JPMorgan Asset Management
“There is still meaningful scope to generate returns within EM as long as investors are able to differentiate,” said Tai.
Shamaila Khan, the head of emerging-market debt at AllianceBernstein
“Local markets are becoming more attractive,” said Khan, singling out South African, Russian and Mexican local bonds as among the most appealing. “Selectively, we are finding value.”

Vincent Benguigui, a portfolio manager at Federated Hermes
“Duration is already a problem when you see that rate-sensitive sectors underperform and this is going to increase,” said Benguigui. “Clearly everything is stretched.”
Cem Keltek, a credit strategist at Commerzbank AG
“While the extended recovery in fundamentals should provide another layer of support, higher yields in the euro government bonds space should limit euro investment grade’s ability to attract inflows and limit tightening potential once rates stabilize,” wrote Keltek. “Pressure on rates and tapering prospects later in the year render long-end risk-reward unattractive.”
Martin Hasse, a portfolio manager at MM Warburg & Co.
“It’s more or less carry at this point,” said Hasse. “Maybe a little tightening but not so much. High yield and subordinated notes can see more of that.” 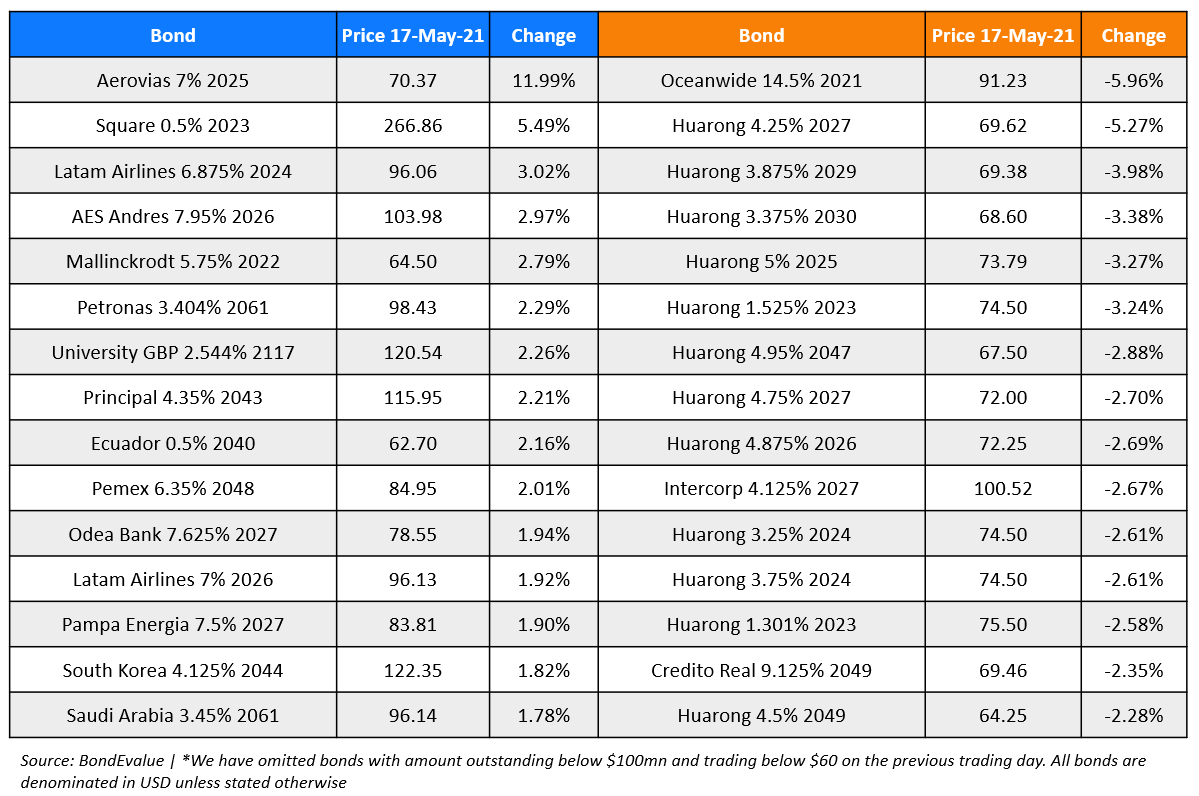