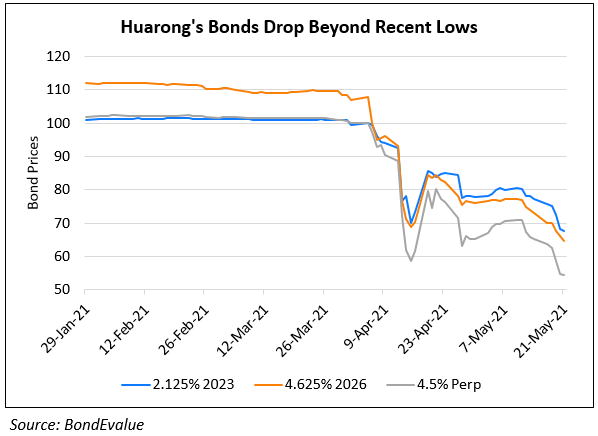 Most of Huarong’s bonds have dropped below their recent lows even as the company repaid its $300mn 3.3% bond due Thursday. The repayment was widely expected as the company wired funds for the redemption a few days back, but another week of delay in its results and lack of clarity regarding restructuring plans or government support have been worrying investors. The bonds continued to sell-off even after Huarong said its liquidity position was “fine” and that they made “proper arrangement” and “adequate preparation” for future bond repayments.

“Many factors could be involved in China Huarong’s debt resolution and it will take time for any proposal to be finalized… Although Huarong could get some liquidity support from banks, it’s still unclear whether bonds will be repaid at a discount in the long term.” said Li Gen, CEO of Beijing BG Capital Management. Huarong’s next offshore maturity is on June 3 for a $900mn 3.25% dollar bond issued by Huarong Finance II Co Ltd. with Huarong saying that they have made appropriate arrangements.